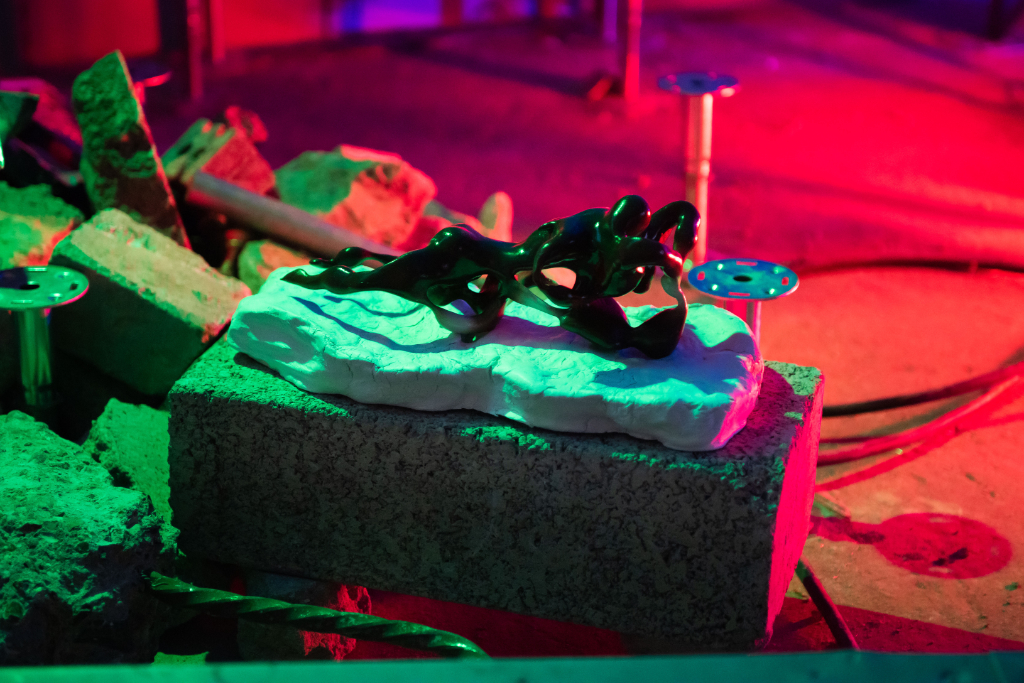 Insight: ‘Futures Past’, an immersive & interactive journey at arebyte Gallery in London

Operating within the register of science fiction in imagining alternative versions of the future and, in doing so, creating a possibility of effectuating otherwise unimaginable changes outside of the realm of fiction seems hardly far out in a reality that is increasingly difficult to make sense of with more traditional tools. While the previous programme [Realities programme] at arebyte delved into the complexities of our experience and perception of the present, the current Sci-Fi programme questions these established tools and methodologies, exploring non-linear and circular time, testing new technologies and speculating on concepts such as cyborgian prosthetics, performativity within identity and digital terraforming. Rebecca Edwards, the curator of the programme, walked us through more details about it with an insightful chat. The programme also considers perspectives of new technologies that sit at the borders of speculation (such as quantum computing) and non-linear and circular time, which question what we already know in a more logical sense, Edwards says.

As a part of the Sci-Fi programme, arebyte Gallery presents Futures Past, a group show that looks at fictioning and alternative futures through a series of exhibitions, live performances, online experiences and educational activities. The exhibition transforms the gallery into an undefined archaeological dig site. The main path and smaller walkways invite audiences to discover scattered fragments of media and objects among stone and metal rubble. I was reflecting on how we collectively think about the future. What feels inevitable, what we might ideate on being next, and what we hope for, and how all of this feels incongruent with the non-linear way artists research, make and talk about their work, explains Edwards when asked how she conceived and created this speculative landscape.

Multiple projections and screens of variable sizes flicker across the semi-dark space enlivened by coloured lights. The sound from Thought Experiment by Matteo Zamagni fills the space, replacing the typical ambience of an outside archaeological site with pulsating, mechanistic yet visceral track. The sensorial stimuli are intense and immerse the viewer within this strange, atemporal space. Natural Language Processing, text to image, has been utilised to create the exhibition “branding” for want of a better word by curator Rebecca Edwards and artist Sachi Patil. With ignited curiosity, one embarks on a spheroid journey towards the future(s) through the past(s).

This idea of a meandering temporality, in opposition to a chronological, Cartesian understanding of time and instead taking a rhizomatic and sporadic approach, is fundamental to the conception of Futures Past and the experience it aims to create. Invited artists move across and through time, exploring ideas of preservation, cultural identity and histories, networked organisms, ecology, the human and the more-than-human. Their vision of futurity is saturated with past and present wounds, catastrophes and failures, yet the perception of these is unstable and ever-shifting. It was important that the works addressed current crises that will inevitably affect our present and future, but also to remember and consider older conflicts and catastrophes that have dominated the last century and continue to do so. In a sense, the exhibition is speculative, but it is also deeply rooted in real possibilities, both positive and detrimental to life on Earth, Edwards continues to explain.

There is a sense of acute attentiveness, heightened focus on and a search for a better understanding of economic, social, political and ecological transformations and crises (ones from the past and ones yet to happen) that can be elicited through archiving treated as a constantly-evolving non-linear process. Futures Past creates a version of a digital archive in motion, one whose content is unstable and will prospectively be subjected to inevitable degradation, facing a need to be transformed, translated and rewritten into new mediums. Yet, within this frailty lie new possibilities. As Jon Ippolito notices, the metaphor for digital preservation is not a slab of granite that endures by remaining fixed but more like a stone skipped across waves of an unpredictable and constantly changing future.

The glitched screens, leaky disc spaces, etc., breaks the seamless narrative and expose the carefully constructed fiction of a futurity seen from the past or present. In failing, the works gain the potential to transform continually and with them, so do their possible readings. Legacy Russell’s take on the connection between failure and morphing and the glitch as a mechanism of disruption seems very pertinent for Futures Past.

Critically Extant work by Entangled Others uses AI algorithms trained on millions of open-source images of nature species to generate visual representations of critically endangered species. Juan Covelli also uses GANs to reimagine the Quimbayola artefacts that are still to be returned to Colombia from Spain. Both works morph reality with technological imagining to create liminal outcomes. While, for the most part, the errors and flaws of the employed technologies (apart from consciously explored glitches) might remain imperceptible for the audience, they are nevertheless inherent to them and point out a broader sense of the instability of our reality and all its material manifestations.

The glitch opens a crack in the shiny, seamless surface, exposing all the dichotomies and brokenness lurking below, but it is this rubble from which new futures can be rebuilt. Futures Past’s act of removing parts of the gallery’s floor is a physical gesture of such unearthing. Fronte Vacuo explores loss, religion and violence through a new language of symbols and gestures, often using AI as the backend force, to construct a world that is both intimate and abstracted from the “real”. And Lawrence Lek’s Bonus Levels works explore the architecture of cultural institutions in London as a series of fictional landscapes, remade and reconfigured.

It also points out the invisible backend structures and processes utilised to create carefully orchestrated narratives of progress, power and absolute control propagated by Big Tech. While Shinji Toya’s Lives of Your Smartphones reflects on the possible consequences of this accelerating techno-capitalism and questions the possibility of alternative modes of operation, artist Libby Heaney responds to the quantum race of Big Tech via explorations into quantum physics terminology of entanglement and superposition through a radical remaking of Bosch’s paintings and iconography and pseudo-commercial ideologies. Edwards also mentions that The decision to remove parts of the gallery floor, to reveal what’s underneath is an unearthing of the backend of these shiny surfaces. To present technologically-based works amongst the rubble, discarded tech and dust is a reminder of where this technology comes from (the rare-earth minerals found deep underground) and where it is headed (discarded as e-waste, polluting the environment). As consumers of this technology, we must be aware that our desire for the new has consequences far beyond our lifespan.

What else can become of digital objects that survive the passage of time and remain in a future that imminently renders them obsolete? Futures Past situates them as recovered and recontextualised artefacts, fragmented relics. The idea of the relic lends itself to many of the practices in the show. Kumbirai Makumbe treats the relic as emancipated from the body and a manifestation of multimodal creation. Their sculptures are initially made in clay, then transcribed to the digital and rendered using software, to be finally transcribed back through the physical by 3D printing and hand painting. The political symbolism of relics and their relation to colonialism, war and violence are explored in works by Juan Covelli and Morehshin Allahyari – The relics presented in these artists’ works have been remixed via digital technologies – 3D printing and AI – to recontextualise them in the present and ask questions about their past.

Thinking towards more liveable and conscious futures necessitates continuously reshaping our understandings of the past as unfixed and multiple. Archives exist and are interpreted across different contexts, with new stories emerging and contributing to unknown futures. In this sense, the accompanying programme of events, live performances and educational activities organised around Futures Past as part of the Sci-Fi programme is an opportunity to bring more voices and interpretations to the constantly transforming record of our future’s past.