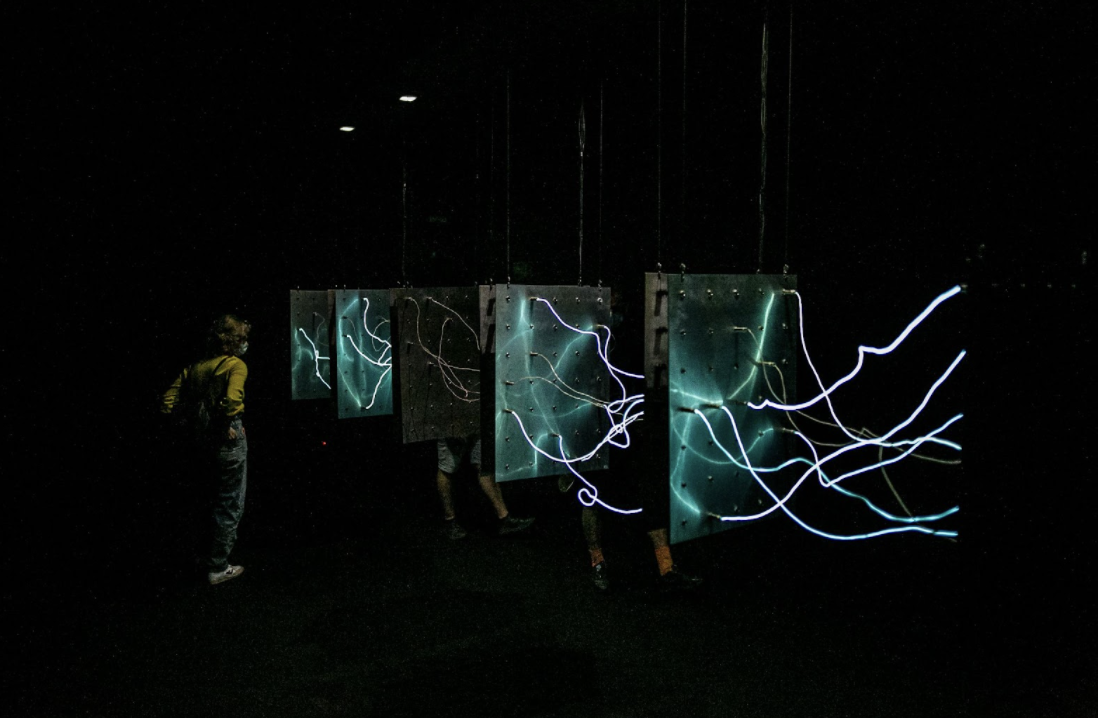 This year L.E.V. celebrates its 15th anniversary as one of the leading experimental music festivals in Spain. Conditioned by pandemic restrictions to festivals plus the sloppy response of both Spanish regional and country governments, which still at the moment of writing misses a coordinated and publicly available plan to opening indoor venues and allowing mid to big-sized outdoor events.

I was lucky to be present at both events; L.E.V. Gijón is the original festival in the north of Spain, and L.E.V. Madrid is a spinoff of L.E.V. Gijón. It started in 2019, intending to become the experimental festival of reference in the capital city of Spain. In both, I experienced a mixture of contradictory emotions: joy, comfort and community, frustration and a sense that more could be done if authorities would allow a music festival in full effect.

Celebrated by many as the best place to discover new forms of electronic music between art and the club. This year only three locations were used: the main auditorium at La Laboral Centro de Arte y Cultura- a cultural space situated just a few kilometres away from the city centre-, the Teatro Jovellanos, a 19th-century old theatre located in the burgeoning city centre, and Palacio de Revillagigedo, an 18th-century palace, which was exhibiting VR installations. Hosting some concerts placed in the centre instead of La Laboral gave a much-needed sense of connection with other festivalgoers. It was a genuine substitute for huge lineups, several stages and fresher productions.

Ryoichi Kurokawa performed his celebrated show named Subassemblies, which premiered in Spain at L.E.V. 2019. Placed in the state of the art auditorium of La Laboral, the show delivered an intense journey through visual storytelling focused on how ruins are invaded by nature. The set foregoes the laws of physics and translates you to an eerie world of cacophony where a few things are what it seems. Feeling bathed in entropy, disoriented and overwhelmed by light and sound was a great starting point for the festival.

A lesser-known Lucie Antunes jumped up to the stage surrounded by a large display of instruments, synthesisers and drums and a couple of accompanying musicians. The French artist has a background as a classically trained musician, with the drums as her instrument of choice. Her music is close to electro-acoustic with a strong pop accent. She arrived at the festival to present Sergeï – her first album – self-released in 2019. A surprise for many, the trio delivered a much-celebrated set of nonchalant, easy-going songs. It connected strongly with the audience and anchored a relaxed mood that matched perfectly with the aura of this edition.

Fasenuova is a band rooted in Asturias, with an abrasive sound between post-punk and electronics. They are known for their no-frills, no-compromise attitude. Not well-known outside Spain, their music effortlessly captures the anguish and anxiety of the post-industrial Asturias. The region enjoyed better times in the 60s and 70s, thanks to mining and industry. It has a long history of working-class movements, but it’s still struggling with economic recovery, unemployment and the flight of young Asturians to find work elsewhere.

The band delivered an outstanding concert, bringing anger and despair to the Jovellanos. Helped by the always on point visual work of Marta Verde, this time capturing live video of the performance, processed, altered and then delivered through the screen.

The Vortex program included a few VR sets from the 2020 Madrid edition, including two collaborations between Laurie Anderson and Hsin-Chien Huang. Both exhibits – “Bodiless” and “To The Moon” – use technology in the service of a narrative. Not as an end, but as an instrument to dazzle and engage the audience.

L.E.V. Gijón 2021 wasn’t the big 15-year celebration the scene was waiting for, but positively, there’ll be time for that in the 20th celebration. It provided a beautiful space of connection for the community in the charming scenario of the city. Enough to forget and reconnect with some of those coveted pre-pandemic emotions, and in these times: a privilege. It felt almost miraculous to participate in a few days of musical engagement in this beautiful city in Asturias.

A month later, with more than 70% of the population fully vaccinated, 80% with at least one shot, L.E.V. Madrid 2021 took place under the same restrictive set of rules. Celebrated in a small auditorium with social distance and masks, not an outstanding location for the kind of A/V sets we were about to watch. Most of them were collaborations between a producer and a visual artist, in a double feature format: two shows scheduled in the evening and the same pair at night, so more people could attend.

Spanish artist Irene Ivankova was, without doubt, the greatest surprise of this edition. Mixing her live voice with samples and oscillating between Ambient music and New-Age, her show was transcendental, spiritual, minimalistic and ominous at moments. Supported by the visual work of Alvaro Chior, the ensemble delivered a great show. The concert was extracted from Ivankova’s second album named Mogut’ Yun. It has been recently released in her own label: Eternal Recordings. The future for Irene looks promising, and we wish that she continues to deliver works of this quality.

Grischa Lichtenberger proposed a set based on glitch, noise and computerised voices, with hints at Pop. The Raster-Noton artist presented KAMILHAN; il y a péril en la demeure, a record released last year that closes a cycle of five releases gravitating between the hermeneutics and social aspects of art. With fitting visuals that used geometric figures and somehow a vintage touch, but elegantly supported the musical discourse of the German musician.

Lee Gamble delivered an obliterating set, which excellently sums up his work of the last decade. Deconstructing different moments of the Bass Continuum history and moving fluently from one to the next, his music was vibrant, intense and cheerful, provoking every kind of possible movement of the completely seated crowd. Supported by the live visual operations of Clifford Sage, Gamble left a final moment of devastation, a mosaic of sound bytes amalgamated in a barrage of sheer noise. Pure joy and a force demonstration from the British innovator.

Varg was supposed to join forces with Croatian Amor but had to perform on its own. The Danish band travelled to Spain via the UK, which caused airport delays, another successful case of Brexit policies. In that situation, Varg resorted to a live show focused on his latest works, showcasing his dadaistic pop side. It was an entertaining, nonchalant end to the weekend.

As is usual at the festival, this edition was also home to Vortex: several installations plus VR and AR performances. Tundra, the multimedia collective based in St Petersburg, presented Row Signals For Space, commemorating the 60th anniversary of the first manned flight by the Russian cosmonaut Yuri Gagarin. A set of concentric circles set in motion, demanding attention and imagining meta-reflections on the power of multimedia to empower society towards new discoveries, interactions and emotions between the environment and us.

The Canadian Artist Martin Messier proposed a captivating installation with Impulse. It elaborates on metaphors of the brain functioning as a machine by highlighting dendrite and axon connections on a human-size scale by using light and wires. The brain serves both as receptor and impulsor of the analogy in this case.

We are pleased that a festival as appreciated as L.E.V. 2021 was able to take place. We can see the light at the end of the tunnel, but it is not a firm reality in these uncertain times. Hopefully, we’ll be there in 2022 to fully enjoy a proper state of the art festival, with anniversary celebrations between artists, audience and organisation.