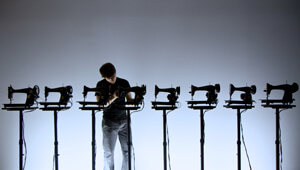 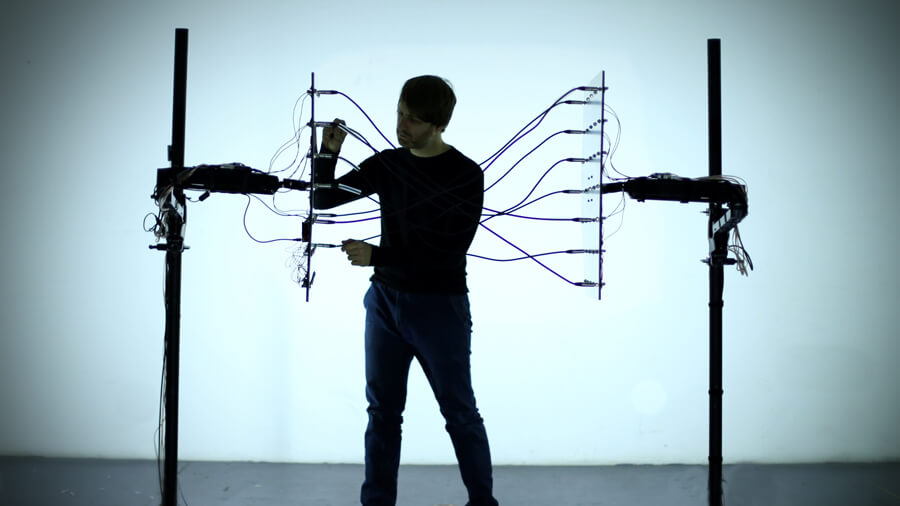 As electronic technology impact on music becomes more prominent, we wonder if we are aware where sounds derive from; especially those from the natural environment that one hears without perceiving an originating cause.

Electromagnetism, or the interaction between electric currents and magnetic fields, is what Canadian sound artist Martin Messier employs in his new project FIELD, displayed at Sónar +D. Messier uses everyday electromagnetic fields, undetectable to human ear, in order to create sounds transforming the electric signals into noise and light. He becomes part of the performance by plugging and unplugging transmitter connections, generating an electrically forceful audiovisual show.

Messier finds inspiration in everyday materials and bodies, taking the interaction between sound and material to another level and exploring new frontiers in musique concrète. His previous works L’horloger (the “Clock Maker”, 2010), Sewing Machine Orchestra installation (2011) and PROJECTORS (2014) incorporate quotidian objects like projectors, alarm clocks and sewing machines, providing them with musical attributes and creating music out of them.

Pushing further into more interdisciplinary experimentation, Messier takes his work to a contemporary dance context, including the human body as a creative source. The movements and actions of performers (sometimes himself) are integrated with lighting and sounds, creating dynamic choreographic works. One notable example is SOAK (2012), where the bodies in motion of two dancers conduct an immersive and aesthetic atmosphere with contrasting sounds and luminance. In MACHINE _ VARIATION (2014), a collaboration with sound artist Nicolas Bernier, the bodies of the two composers manipulate a massive structure on stage in response to what they see and hear.
Messier’s approach to electroacoustics is remarkably experimental and unique and yet the pieces remain coherent, firm and connected to the real world. He has recently given us some hints about the idea behind his next project, “to create a relation between scenography and dancers”. One thing is certain, Messier will keep investigating the relationship between sound and entities to create inspiring and captivating compositions.

What drew you into working in the intersection of sound art and technology, exploring the relationship between electroacoustics and materials?

I have always liked (and I still do) being surprised. When I discovered electroacoustic music (music concrète), I discovered a weird and strange beast. At the same time, I was really attracted to see what was this new universe I just found. I felt it was revolutionary in terms of sound and in terms of way of thinking.

In musique concrète, using any source to create music is a basic principle. Everyday objects become tools to create sound and if you are using certain objects, they can also be anecdotic. I have been really attracted by this whole idea to use any objects to create music. It gives me the impression that the way you look at things can change what they become, that everything surrounding us can become interesting if we give it more attention. About my projects I present on stage with everyday objects, all this just came to me because I wanted to present electronic music in a different way.

I wanted to play with something that has a meaning and this is why I used old sewing machines, projectors, old alarm clocks…

Another aspect of your work takes into account the interaction with the human body (sometimes your own, some others in collaboration with dancers). Could you tell us a little bit about the intellectual process behind?

My affinity with contemporary dance comes from the fact that this art is made without any narrativity (similar to instrumental music). I like this idea that something can be expressed without words, without saying everything, without telling a story.

I have been in contemporary dance for a while. I first did music for dance and after a few years, I just understood that my opinions were really clear about what I was seeing while working with a choreographer. It was clear what I would have liked to try. But we were always making a 3 minutes section with something that could have been developed for a complete show. So then, I just started to create my own pieces.

For FIELD, your latest project, the starting point is that it is possible to create sounds using electromagnetic fields found in our environment. What were the biggest challenges you faced in its development?

The biggest challenge with this project has been to go somewhere else that I am not used to (and it will be the same in the future). I think for this project, it has been achieved. The number of new elements I am bringing into this piece is enough to say that I reinvent a little bit myself. It has been a long process to add and add new things in the puzzle while telling me : How will I be able to wrap all this at the end?

Technically, it is super complex. I could have been lost in this world of infinite possibilities. The hardest thing has been to try to make it coherent. Concerning the electromagnetic sound recording, it hasn’t been too hard, I just did what we all do when we do field recording but I did it with an electromagnetic transducer microphones.

For the moment, I am working on a choreographic piece with 3 dancers for next January. This idea of this project is to create a relation between scenography and dancers’ movements. To create that, I have to work with a set that is moving. So a couple of chairs will be hung and they will be moving while dancers are moving too.

What keeps you up at night?

It may sound cheesy but it my little girl. She is 1 year old…I just understand right now why parents are so enthusiastic about their kids.  And I think I underestimated the amount of love it would give me.