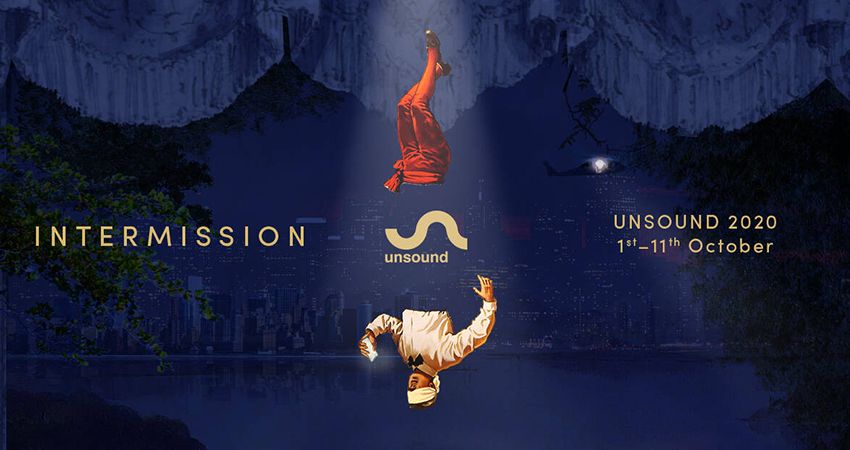 Unsound festival returns for another edition in less than two weeks. Adapting to the unpredictable circumstances the team this year has pushed their creativity again to present a versatile and exciting programme (despite the limitations) for the online audiences between 1st and 11th October.

The theme (something that every year articulates the whole narrative of the programme) for Unsound 2020 is Intermission. Meaning a break in a performance or production, the word gains a special dimension in the current context, as it’s referring, as well, to the rupture caused by COVID-19, a period starkly separating what we have known before from after.

On one hand, there’ll be an Intermission book and album (both released on 16th November), with commissioned original texts, music and sound works and response of the year in which the pandemic spread across the globe. Together they aim to explore the contradictions and tensions embodied in the word ‘intermission’, since this year is a pause, yet not a pause, a year of upheaval in progress with an uncertain future. Artist feature in the book and album include Chris Watson, Jana Winderen, Deforrest Brown Jr and James Hoff, Andy Battaglia, Tim Hecker, Philip Sherburne, Steve Goodman (aka Kode 9) and Kristen Gallerneaux among others.

The discourse programme will carry the heavyweight of the eleven days of the online festival programme. A space for dialogue, thinking and knowledge at a time when there is so much to urgently discuss; not just about music and sound, but about their place and function in the new world that is rapidly taking shape. With some of the final discourse speakers to be announced next week, one of the main projects will be Machine Listening, a common effort of Unsound and the Australian organisation for the sonic arts Liquid Architecture. Exploring themes of surveillance, privacy and corporate abusive listening, Machine listening is much more than just a new scientific discipline or vein of technical innovation. With a practice akin to the more widely (but unfairly) known Forensics Architecture, Liquid Architecture have been running for over 20 years. This new project sets a new discipline framework and becomes an emergent field of knowledge-power, of data extraction and colonialism, of capital accumulation, automation and control. The programme during Unsound 2020 is scheduled in three experimental zoom sessions (between 2nd and 4th October) each of which will investigate the implications of the coming world of listening machines in both its dystopian and utopian dimensions, comprising conversations, performance, provocations and writings from contributors around the world.

The opening show of this year’s online edition will be Weavings, a durational improvisation conceived and co-curated by Nicolás Jaar, structured in the manner of a long fabric of sound, with performers playing with the artists coming before and after them. There’ll be another durational performance ∞ o’clock, where artists will create music designed to allow one to sleep, listen, or to enter a meditative state. The six-hour-long experience, repeated four times across twenty-four hours, begins with Quarantine Dreams by the Irish artist and filmmaker David OReilly and will include composition from artist such as Lucrecia Dalt, Felicia Atkinson and Bartosz Kruczyński as Earth Trax.

Essays merging sound and image have also been commissioned from Steve Goodman and Kristen Gallerneaux, while Lawrence Lek, a regular collaborator with Steve Goodman,  will show his film AIDOL 爱道, and take participants on a tour through the haunting world this film features, with a discussion with Goodman after the screening.

Visual duo Pussykrew is collaborating with 700 Bliss (Moor Mother & DJ Haram) to create an interactive journey through a world inspired by the music and lyrics of the duo. NAXS Corp and Meuko! Meuko! will present Afterlife: ev20f1, an online game, experimental space and curatorial project. where the customised multiplayer will include a narrative program of Taiwanese experimental artists as part of a wider theatre-like experience.

Sound recordist Chris Watson, will take the audience on a guided walk from an old apple tree in his back garden, to vertical cliffs of a seabird city on the Northumberland coast, to demonstrate the techniques used to create his piece Unlocked for the “Intermission” album.

And acting as a master of ceremonies, accompanying and commenting on all the online exposure, we’ll find vlogger Drumpilled who, through live talk-show streams will attend their first Unsound ‘in person’, via a custom 3D Virtual Avatar System designed by Sam Rolfes.

The online program is scheduled on the Unsound website, with links to program elements – some of which require registration. Meanwhile, a freshly launched Unsound Discord will function as a meeting place where the audience can find out what’s currently happening, or just hang out and chat, sometimes engaging directly with specific projects, even conversing with artists and curators presenting work during the festival. These creative and fulfilling interactions among the audience, artists and organisers…were something very special from the Unsound Krakow’s physical editions and something which we will very much miss. But at the same time, it’ll be curious to see how we unfold amidst unknown formats, and we’ll make sure to make the most of the new resources and experiences Unsound has prepared.

*Unsound’s entire program is free. If you wish to support the festival, you can do so via their Patreon and buying the book and album.