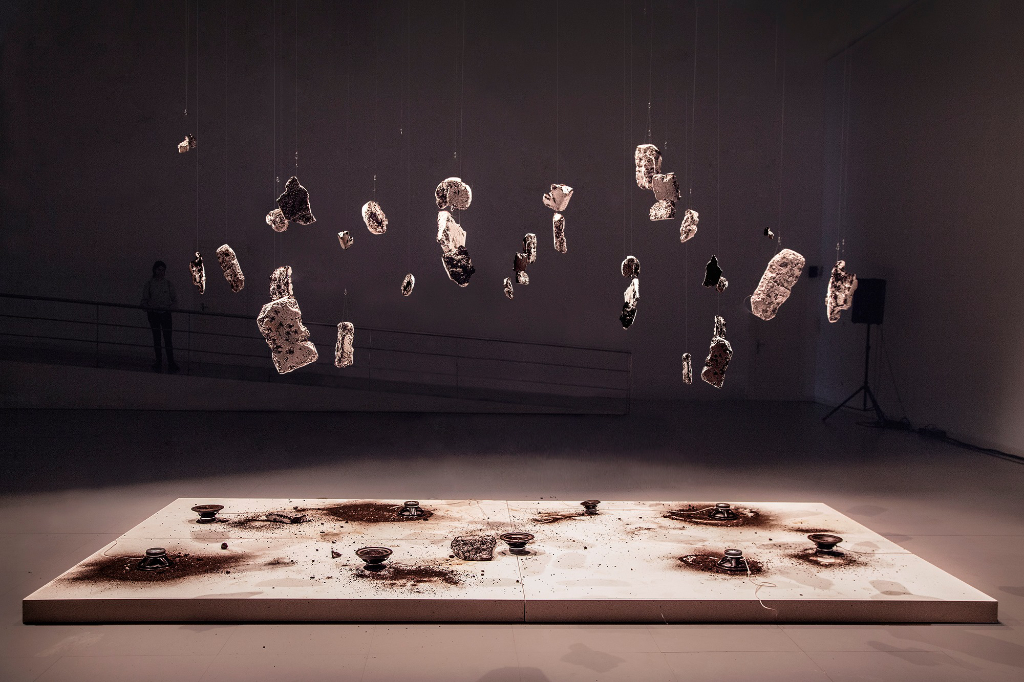 SEMIBREVE is entering its second decade this year. Happening 27 – 30 October 2022 and spawned in Braga, Portugal’s Silicon Valley of the XXI century, this electronic music and digital art festival has been committed to supporting the community of artists and students in Braga and the north of the country. What first was a one-venue 8 acts-only festival slowly expanded to the entire city, with more days and more shows’ shared with us the festival’s curators. The festival was born out of the passion for experimental electronic music of a group of four friends, who conceived the happening with an aim to energise their locality’s contemporary art scene, specifically on the outskirts of Portugal’s bigger cities, where they felt an urgency to share a new kind of sound and music programming bringing together art and technology, bridging the gap between audience and artists.

The festival’s unique character is granted by the venues where the events are taking place. SEMIBREVE’s site-specificity has been well-known for its breathtaking UNESCO heritage locations that the old roman city of Braga is rich in and give the festival its distinctive identity, providing a special experience to the audiences while inspiring the artists. The importance paid to the places containing the physical acts and listening experience challenges the curators with a creative quest to ever-innovate the marriage between sound and space by bringing diverse experimental multimedia artistic gestures into the highly charged interiors of ancient architecture.

That’s part of the strategy to build a strong identity and to make Semibreve not just another festival but a festival that provides a special experience to our audiences. We don’t want Semibreve to grow exponentially; instead, we intend to enrich and expand the experiences of watching shows by using special locations that we’re fortunate to have in Braga, a very old roman city with a lot of interesting places. We think these patrimonial contexts are not only special for the audiences but are also inspiring and exciting for the artists. Luis, one of the curators, told us when asked about how Braga and its surrounding influences the festival and the work presented.

Even though the art programming has not been the main motivation for the festival founders, the line-up of artists is as stunning as the interiors they are playing in. Among others, Félicia Atkinson has been commissioned by Semibreve in a partnership with the Maintenant Festival, in Rennes, to collaborate with flautist Violeta Azevedo. Of also Shelter Press and earlier Editions Mego’s François J. Bonnet and Stephen O’Malley are premiering as a duo with “Cylene”, propelling the spirit sourced at Ina GRM, a Paris studio formed by Pierre Schaeffer. In addition, Alva Noto is sharing his seductive techno symptomatology, while Lea Bertucci and Ben Vida present their debut work together. For this festival edition, Caterina Barbieri is making an appearance for the second time. At the same time, Ruben Spini and Marcel Weber (MFO) create a complex visual environment for everyone to share an experience of collective memory.

Known for its sincere curation of ‘a carefully-considered programme’, the festival team has organically approached their work from a personal perspective, inseparable from where their ideas sprout. They add: curating is a multifactorial process that can’t be stripped down analytically or be presented via an exact methodology. It’s based on our perception of an artist’s work, the way it relates to the global identity of the festival, and the room/venue where we are thinking of it for. But also how it mixes harmoniously newer and older generations of artists, artists from diverse backgrounds, genders, cultures, ethnicities and nationalities.

Collapsing chronological timescales throughout the years, SEMIBREVE has been evolving, enfolding its origin with increasingly more ingenious layers of technologically driven creative encounters. Sourced in the motivation for a support network for the local art and science community, the art programme has been growing in synch. Based on the idea of sharing knowledge, the curators have added other events like workshops, masterclasses and informal talks over the years. There is a permanent programme of installations as well, with an aim to foster the local community of creators, complemented by the Edigma Semibreve Award, celebrating and promoting the creation of works that explore interactivity, sound and image supported through digital technologies.

The outreach of the Edigma Semibreve Award has been increasing over the years. This year was an enormous surprise because we had almost 170 submissions, which was an absolute record. In line with what I’ve said earlier, I think this is another way of supporting upcoming artists. Regarding the nature of the works, we clearly note a tendency to focus on social, political and ecological topics. In that sense, the digital art/media art domain has been increasingly getting closer to the discursive logic of contemporary art, abandoning a bit of its technological focus and prevalence. Luis shared with us.

This year the winning submission is COORDINATED° by Animaspace and Arina Kapitanova. This multimedia installation and performance is described as a framework of a moving decentralised protest, communicating the locations with autonomous flying agents – drones – in an encoded way. After an especially difficult selection process, the curatorial team has found: the winning proposal was a very interesting, clever and powerful statement and example about the use of technology and art against the oppression of authoritarian regimes.

Other winning installations include Insensored by Gonçalo Cunha, exploring consciousness’ omitted fields of vision, or Caixa Postal by Lea Taragona, who works with recorded voices to recreate haunting presences. In addition, there are works which bring importance back to nature through technology, like the sound installation Forest Waves by Luís Luzia, which communicates the degradation of the Portuguese forest due to human impact throughout the last decades. Finally, Joana Araújo and Rute Costa come back to the ‘self’, exploring in their interactive installation Espelho Meu, Espelho Teu individuality and distinctiveness of a human being, reflecting on the interconnectedness of forces shaping selfhood, be it another person or a machine.


SEMIBREVE’s curatorial team admits The Semibreve family grows every edition and even though we stood ten years without repeating an act, we created very good relationships with pretty much all the artists we have welcomed. Living in the current climate of ruined systems, endeavours like Semibreve, devoted to building unconventional connections between people and places outside of centralised circles of conventional communication channels, are essential for meaningful mutual exchanges and transtemporal tuning into each other.