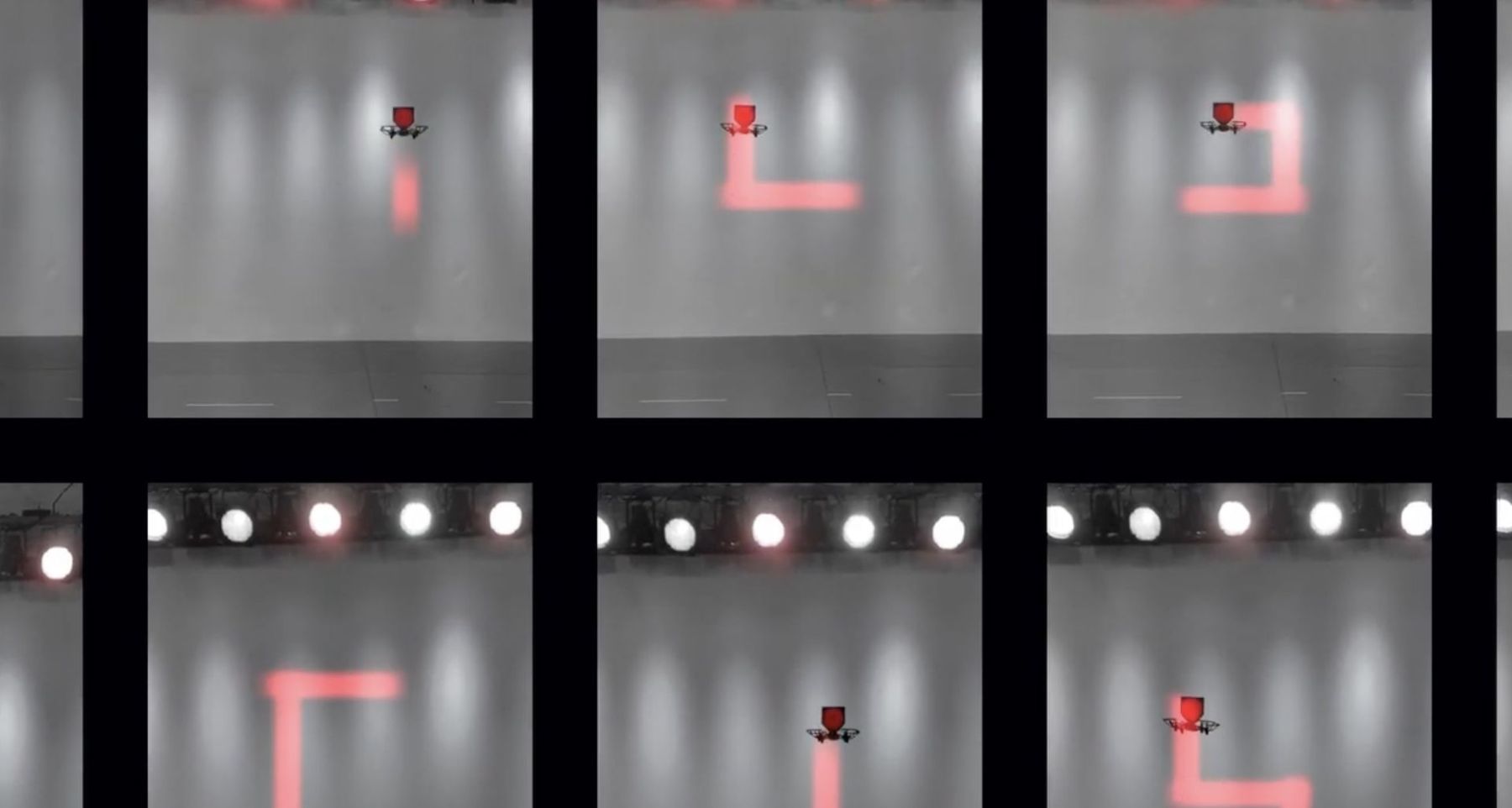 When Angelina Kozhevnikova (who works as Animaspace) and Arina Kapitanova met at Berlin’s School of the Machines, there were too many coincidences for them not to connect. Both come from Moscow, both had emigrated out of their home country, and both had studied and worked in architecture. As a strong bond emerged between the two, their eventual collaboration became inevitable.

As the Russian invasion of Ukraine unfolded, Kozhevnikova and Kapitanova knew they wanted to utilize their skills in design and architecture to serve the resistance that was forming in their home country. Especially considering that the Russian regime was (and still is) arresting anti-war protestors en masse, the two collaborators wanted to figure out a way to circumvent police interference with these demonstrations. As artists committed to another direction for humans and our relationship with technology they also wanted to utilize new technologies, like augmented reality and drones, to show how these tools could be used in resistance to authoritarian regimes.

Coordinated°, the project born out of this collaboration, seeks to do just that. Coordinated° is a framework of a moving protest, where the coordinates of the next locations are communicated with drones and decoded by people with AR. The drones move in a way that suggests nothing more than a fun performance but are secretly giving out coordinates to the location of protests and demonstrations. The drone performance is coded using Python but done so autonomously using an alphabet that translates numbers to the movements of the drone. People can decode these coordinates by using a special AR Instagram filter, following the drone movements to reveal the coordinates they are spelling out. By working in this bottom-up way, Kozhevnikova and Kapitanova hope demonstrators may be able to use these technologies to thwart state interference.

Coordinated° is the winner of the EDIGMA SEMIBREVE AWARD 2022, awarded by the experimental sound and audiovisual art festival Semibreve in Braga, Portugal. Coordinated°will be presented during the festival as part of their art and discourse programme.

The pair hope the work will be the catalyst of a certain attitude towards the human-machine relationship that could inspire very unorthodox applications and “misusages” of technology. Especially at a time when authoritarianism is on the rise, not just in Russia but throughout Europe and the US, Coordinated° speaks to modern technologies’ ability to outmanoeuvre authorities and to organize in an accessible but covert fashion. While the project was inspired by Russian protestors, there are many ways such technology could be utilized in other situations. Especially as drones are often seen as a tool of war, the duo are hoping this work challenges these preconceptions and allows audiences to reimagine these technologies as tools that could help similar resistance movements.

We spoke with Kozhevnikova and Kapitanova about the unique challenges of realizing a project of this nature, as well as their creative processes and inspiration.

Before COORDINATED°, you collaborated together during the School of the Machines’ SIGNALS residency. Could you tell us more about how this collaboration started and what it was like working together?

Angelina: SIGNALS residency at the School of Machines led by Rachel Uwa was an incredible experience where we met a lot of great people and each other! We both come from Moscow, emigrated to another country, and studied and worked in Architecture. Too many coincidences and a solid basis for connecting! Arina is an amazing collaborator, and I hope it’s not the last project together.

Arina: Definitely not! I found Angelina a very strong partner, both on personal and professional levels. The main theme of the residency, communication within authoritarian regimes, instigated the conversation between us quite organically. Sharing so much background and having horrible news coming every day, we just personally connected with each other and decided to extend this connection to our work. We are very thankful for this residency and Rachel, that has been and still is our great support!

Animaspace is an interdisciplinary practice at the intersection of generative art, design research and experimental architecture. Your creative practice reflects an interest in technology and its advancement to explore the connection between human-machine-environment. Could you tell us more about the intellectual process behind COORDINATED°, this year’s Edigma Semibreve Award winner? What do you hope to accomplish with this project?

Of course! Coordinated° is a framework of a moving protest, where the coordinates of the next locations are communicated with drones and decoded by people with AR. It could potentially lower the chance of getting arrested by the police since a major part of the infrastructure is usually prepared overnight, and the top-down organisation of police is slower than the bottom-up nature of our framework.

More generally, the project is trying to bring the freedom of speech or the right to protest to people who happen to live under authoritarian regimes such as Russia and bring awareness to those from outside that such basic rights are not always a given. Another important part of the project is the interaction between humans and machines. We know that drones are used a lot in the war itself for many anti-human reasons, and here we tried to shift this perception and prototype a way where they would help to organise a resistance movement and bring hope to something so dark as this situation.

COORDINATED° is trying to shift the way we perceive technology. Apart from AR, what other new technologies did you use?

The drone performance is coded in Python and runs autonomously from an alphabet that translates numbers to the movements of the drone. The AR is an Instagram filter where the participants are drawing in space, following the drone’s movements. There is also a complimentary part. It consists of an urban scale particle-based simulation that represents how the protest could be organised and a video that explains, connects different scales and gives a feeling of this artwork.

Angelina: To be honest, the project happened naturally and was released without thinking a lot about the timing. It was May, and both me and Arina, we somehow channelled all our frustration, emptiness, anger, and certain helplessness into this artwork, and it felt quite liberating at the time. I think it’s important to understand that not every Russian supports the war, and it’s impossible to know the numbers or percentage of supporters since it’s not safe to share this kind of position.

Arina: Exactly. We can’t tell the number of people who are against the war, but we wanted to create something to signal that there are many of us. Being surrounded 24/7 by propaganda, which is stigmatising you as a traitor for having an opposing view, can make a person feel alone. Also, speaking of urgency, the situation had become considerably worse since May when we started. Very recently, a military mobilisation was announced, and I had to live through an absolute panic of trying to help my husband leave the country that happened to be there. In my opinion, tens of thousands of people left Russia to escape being drawn to the war, which shows the real support level.

Have you found any practical application to this project yet? Do you have plans to release this technology outside of the Semibreve Festival?

Practically the framework can be adopted tomorrow or a certain version of it since it consists of very low-cost parts and Russian youth tend to be amazing with programming. But we see it more as a catalyst of a certain attitude towards the human-machine relationship that could inspire very unorthodox applications and “misusages” of technology in a very creative way.

Angelina: I think the nature of the creative process has no space for constant self-examination. It’s supposed to be playful, messy, and non-linear. But of course, in certain milestones (inside of the project or bigger ones), it’s good to critically situate what it is you are doing and what kind of impact it could have. Studio Animaspace was founded with a strong belief that creativity could emerge or be augmented through interaction with machines and our environment. A big inspiration here was second-order cybernetics, Kevin Kelly and, of course, my professor in AADRL, Theo Spyropoulos. So for us, it’s a very experimental process with a lot of trials, testing, and exploring.

Angelina: To do what you truly believe in, no matter the consequences. It wouldn’t be a surprise that doing this artwork creates pretty tangible risks for us. For example, it could no be safe to visit our families in Russia anymore.

Arina: This is something we understood from the beginning. In the middle of the first week of working on the project, Angelina’s mother called crying and asked her not to do it because she was afraid of the possible consequences. But I think it only added a sense that what we do is important.