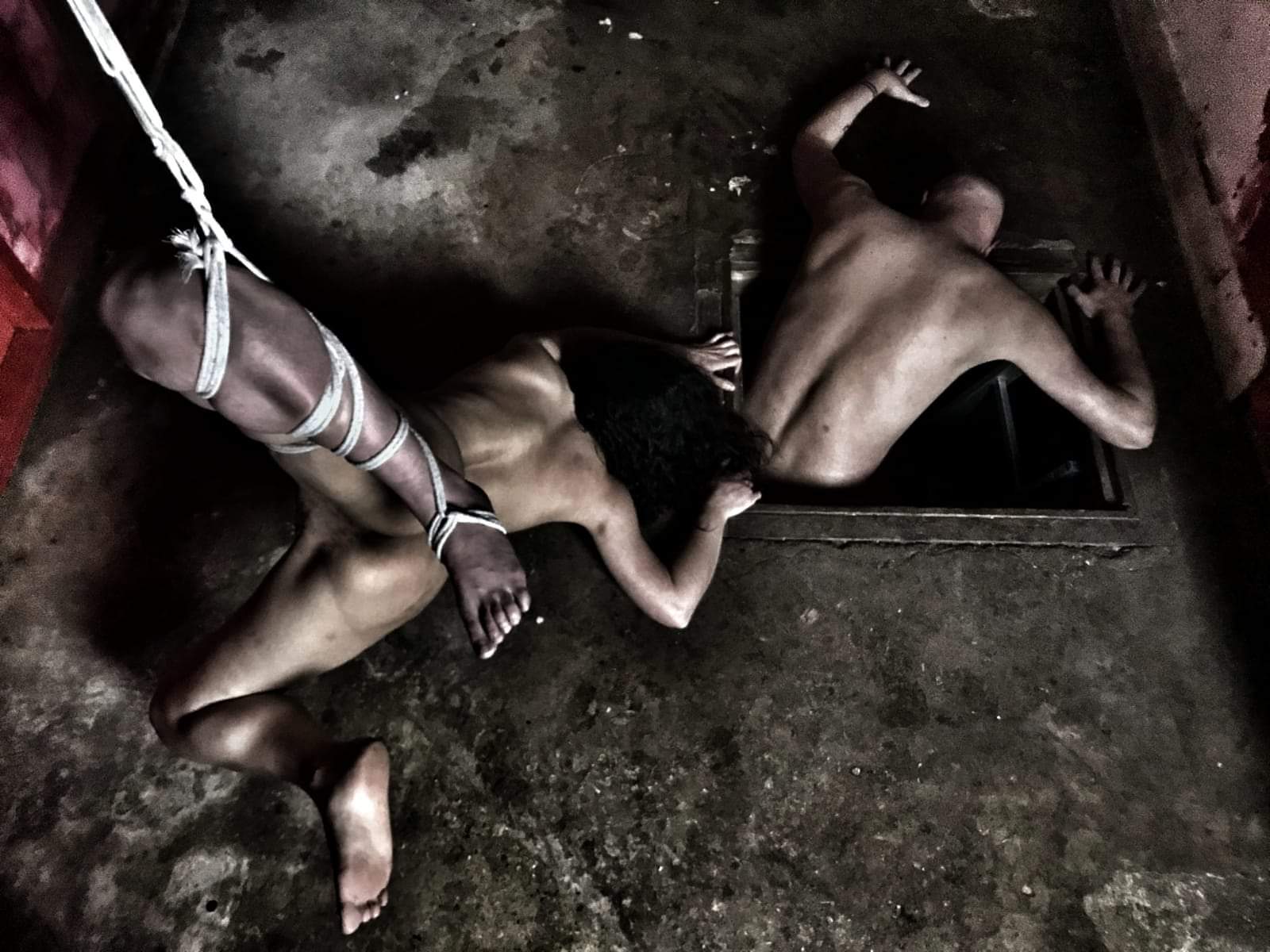 From the beginning of its occupation in 2015 the squatted sewage of the Dungeons of Polymorphous Pan has been obsessively invested in the theatrical devolution of human performers towards fetishist intimacy with fungoid decomposers that animate the space. Exploring anti-humanist concepts through performance art, this year’s Chronic Illness –in their collaboration with the Judgement Hall- focused on dehumanising politics mobilised against displaced people.

During their first event of 2022, which fell on the 5th of March, Chronic Illness performers staged a ‘Pushback’ act inspired by the weaponisation of migrants trapped in no man’s land on the Belarusian border. Choreographed between the layers of fence, created with ropes stretched between columns of the dungeons it divided the spectators into arbitrarily restricted zones.

Mis Saigo, herself a Vietnamese refugee from the American war in Indochina, together with Fung Neo, born to a Slavic family of soviet & nazi concentration camp survivors, both impersonated sadistic border guards of a fictional, paranoid state of Transnistria in Eastern Europe. Naked Ric Stott, dressed only in an oppressive grid of shibari ropes, embraced white flowers during an interrogation in the midst of a fenced-up area. As the border fence was accelerating around him, his limbs were weaved into it and his flowers were force-fed to him sarcastically. Chronic Illness spectators were forced to passively witness the methodical humiliation of trans-political ‘human waste’.


The ecology of waste, signature for Chronic Illness, was intensely introduced that evening already by a couple of live acts, which happened prior to ‘Pushback’ – particularly by Jose Macabra and Kareem Meinohg (dancing as Samaa dervish) performing separately from each other but historically responsible together for the legendary art & activism squat parties Behind Bars (alongside their fetish club iteration Antagony, both 2007-2012 London) and bringing their experience to the Dungeons of Polymorphous Pan.

As the voice of @macabra_jose began to flood the Dungeons of Polymorphous Pan, the space filled with an unmistakable sensation of drowning in the sewage.

Various humanoid bodies zigzagged between columns and pulsating pipes, lubricated by noisy circulation. Their guts aroused premature fermentation to splatter inside them. A digestion of macabre roar.

The Dungeons filled with ground waters yet again. Slurped gene yolks scrambled out of a #urinal oracle. Manhole funnel resonated gurgling answer to Macabra’s vocal pipe. Enmeshed within c.anal suction the sonic bodies were excreted at the Dungeons. A heavy drip leaked.

Choreography within the Blob

The vicious insistence of Iranian trans music played by Paganland introduced a circular motion to the Dungeons of Polymorphous Pan with profound command, even before the Samaa dervish began to move through the space. Obscured by long, black gown and complete Niqab face and head covering, gestures of supple gloves. Detailed separation from the immediate environment, contaminated by human sewage, nevertheless became an invasive vehicle to cross the crowd repeatedly and rearrange it yet again.

Outbursts of whirling, ferocious spinning, abrupt interruptions, plunging in-between people, indent thrusting against the columns, minute hiding behind concrete slaps, slow sliding by the wall or shadowing themselves – all those contrasting modes of Samaa dance were irregularly punctuated by flashes of light stimuli, ill-lit stillness as well as floating video projection, which enshrined the deconstructed dervish. Projecting proud gestures against the constrains of cage-like architecture, dissected by dozen human-size polite columns, Samaa performed the 13th ghostly column of the shadow dancer.

Entering and exiting trance body figures of dervish whirling, they twisted themselves ornamentally into butoesque contortions, fading with claustrophobic darkness. Halfway slow-mo emergence from a mushroom cloud of atomic explosion opening of Zedd’s War is Menstrual Envy led the dervish down the drain of the Dungeons of Polymorphous Pan. At once it became clear that ancestral songs of Paganland didn’t call the dead cultures of the Middle East anymore but, following blobology of Reza Negarestani, they sounded like the fungoid ancestors of primordial ooze. That glistened as a pulsating halo of a rotating silhouette.

Preceding all of the above acts, the 2022 collaboration between Chronic Illness X the Judgement Hall came together as a celebration of the 2021 anti-lockdown trilogy of events, enshrined by Trojanovskx’s album release on the Judgement Hall label. ‘ Theatre of Plague’ EP consists of soundtracks from Chronic Illness theatre performances, illustrated in a zine issued for that occasion.

Chronic Illness sewage hadn’t ever ceased to operate during covid lockdowns of London. After a series of educational BDSM screenings orchestrated as immersive video installations produced throughout 2020 at the Dungeons of Polymorphous Pan, our performers decided to open the space for an unholy marriage with the lunatic cult congregating around the Judgement Hall post-industrial music platform. The first half of 2021 Chronic Illness involved about a hundred carefully selected followers of the Judgement Hall in a trilogy of performances, conceptualized as the theatre of plague. Each of the three acts presented a different take on the theme directed by Aliceex & Fung Neo – each act respectively celebrated with 12+ hours of subterranean soundscapes composed by the Judgement Hall residents.

Plague Play Plague’ referenced the prohibition of theatre during London Black Death through ritualistic procession informed by Artaudian obsession with contagion as a theatrical formula. Continuing the risky play, ‘Game of Plague’ engaged with a simulation of the pandemic, visualized through a computer game interface projected onto performers’ bodies and intersected by lines of infectious conspiracy which repeated gestural vectors from Zulawski’s lice cinema.

Finally, ‘Balcony’ returned to the sadomasochism of judgement and punishment by staging a scene from Genet’s play of fetishistic coping mechanisms in reaction to the crisis of humanity and social unrest. Thus, the Judgement Hall X Chronic Illness formed a lockdown triad of events, bonding the collaboration with the original live score for Chronic Illness performances by Trojanovskx, transformed into EP on the Judgement Hall label.

Transgressing lockdown, Chronic Illness entered the imagination of political theatre. The next coming event, Chronic Illness 18 will happen during the anniversary night of the infamous Tiananmen Square massacre, commemorated by a futurist installation of Fung / Marina & Jose Macabra with a dedication to anonymous cyclists crushed by tanks of the Chinese Communist Party.

In 1989 mechanized army gathered on the night of the 3rd to the 4th of June in order to disperse nearly two months old protest camp of Beijing students, who self-organized themselves in the name of freedom of speech, freedom of media and freedom of association. According to recently leaked data published by BBC in 2017, about ten thousand people were run over by tanks several times, which effectively smashed their corpses into a pulp and later hosed them down as nonhuman debris into the sewage.

During the last decade, the case of Tiananmen returned as a vital narrative for Liberate Hong Kong movement, which sparkled from Occupy Central squatters camp under HSBC headquarters in 2011/2012 and through later mass attended Umbrella Movement inspired the new generation of Hongkongers fighting for independence from Chinese Communist Party in Beijing.

A decade of ideological indoctrination enforced by Beijing communists in Hong Kong education and public life provoked strong resistance. Eventually, in 2019 Hong Kong was forced to introduce certain extradition law, completely destroying the political autonomy of the region by allowing Beijing police to arrest anyone they deem offensive to the Chinese Communist Party.

After over half a year of spectacular city guerilla warfare of HK students, the extradition law was withdrawn, as civil resistance was too strong. A couple of months later Chinese Communists Party announced the covid epidemic, which in 2020 became instrumental in the crackdown on protests by means of lockdown and re-introduction of the extradition law in the guise of novel national security legislation.

Criminalized freedom of speech, freedom of media and freedom of association revived the narrative of the Tiananmen protests 30 years later by means of the biotech regime. Thousands of HK students ended up in political imprisonment for up to a decade – possibly fermenting now into the future political elite of China.

Animating crashed bikes from the Tiananmen massacre as a futurist installation, Chronic Illness 18 will pay homage to imprisoned Hong Kong the day after tomorrow.