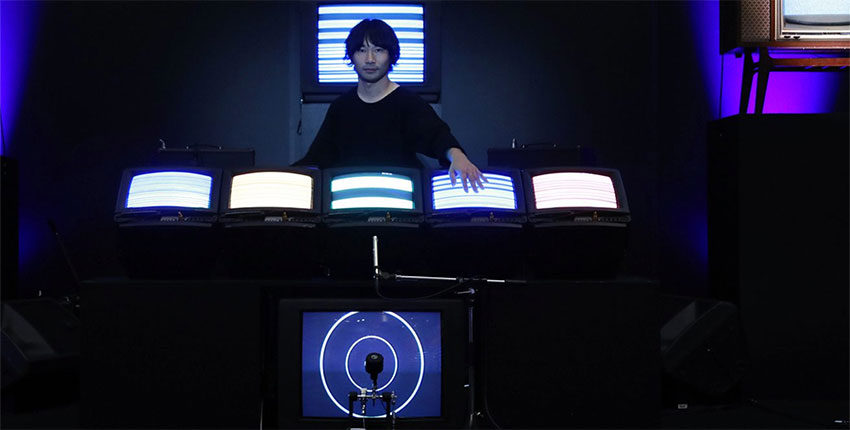 The simplest way to explain Electronicos Fantasticos is to call it a multimedia EDM show. The show is the culmination of the work of Nicos Orchest-Lab, a musical collective founded by Japanese artist and experimental musician Ei Wada.

The group takes discarded electronic devices [1] and turns them into strange, new instruments to produce music that can only be described as purely electric. As awesome as that sounds, this simple description does no justice to how Wada and his group are redefining contemporary electronic music.

Many of the new inventions by Nicos Orchest-Lab rely on the inherent patterns in electromagnetic signals and how they can be used to modulate a pure audio signal. This is illustrated by Wada’s most visual instruments: the static television screens. With coils wrapped around his legs, Wada touches the screens to use his body to close the signal between the screens and the connected guitar amps. The pitch of the dubstep-driven notes produced by touching each screen depends on the width of the static stripes shown onscreen. Wider stripes result in lower notes while the thinner the stripes get, the higher the notes produced.

Wada takes this unique way of signal modulation further through his modified barcode scanners. It works in the same way as the television screens in terms of producing dubstep notes and signal patterns based on stripe width [2]. However, the scanners can produce any number of notes from any barcode, pattern, or stripe that they can read in the real world. Electronicos Fantasticos takes full advantage of this fact by including a dancer in a striped dress in some of their live shows. Nicos Orchest-Lab members then point the scanners on the dancer, creating sounds driven by the synchronised movements of dancer and neo-electro musician.

One of the group’s latest experiments is the CRTelecaster, a guitar-like unit with metal stripe touch pads for strings, an electric screen for a body, and a connector that touches the screen for a static pick. Using this single instrument, Wada demonstrates how pure signal modulation can emulate a variety of popular guitar effects pedals. In the song Recently I’m playing the TV at home, Wada achieves otherworldly and warbling notes, similar to an electric guitar hooked up to a flanger pedal [3] which duplicate the signal and plays it back in steady delays. In other parts of the song, Wada’s riffs sound like classic fuzz pedal-distorted rock, alongside funky licks and even more experimental phase and flange effects. From the way it loops riffs and emulates different guitar effects, the CRTelecaster is a versatile new instrument that will sooner or later send waves through the electronic music world.

In fact, these are just some of the many unique instruments used by the group, an arsenal that continues to evolve and develop based on the musicians’ new research and experiments with signal modification. Wada’s innovative intentions are apparent in how Nicos Orchest-Lab encourages audience members to participate during live Electronicos Fantasticos shows, even allowing them to handle the instruments themselves. And while it’s currently unclear where and when Electronicos Fantasticos’ next live show will be, for the time being, you can follow them on YouTube and their other social channels where they release regular content. Whether you’re a connoisseur of electronic fusion music [4] or someone who simply enjoys new and interesting sounds, Electronicos Fantasticos is a universal experience that can be enjoyed by anyone with an ear for good music.