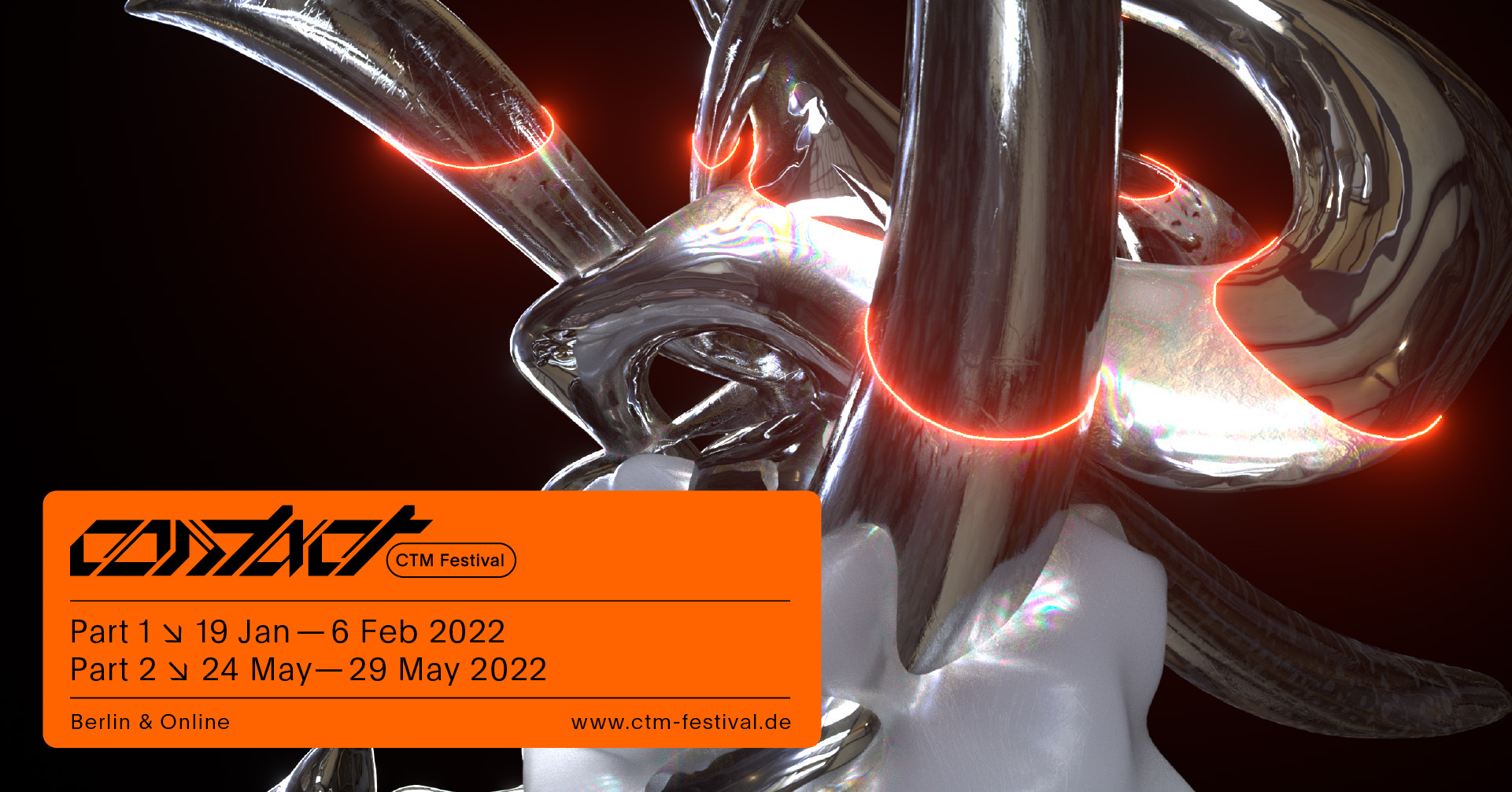 Already a week in, CTM 2022 Contact asks how we might establish positively transformative modes of contact with other realities beyond our own, be it between people with different ways of life, in different parts of the world, between generations, or with our planetary environment and the diversity of its life forms. What modes of listening are relevant and urgent in the present moment and how might we listen in more compassionate ways?

CTM’s 23rd edition has been split into two parts. CTM Part 1 focus on the festival’s exhibition and new installations presented at Kunstquartier Bethanien, plus online talks and workshops to kick-off our Discourse programme. Part 2 will take place in May.

The CTM 2022 exhibition »Connected Alienation / Vernetzte Entfremdung« provides a look into various aspects of working collaboratively in pandemic times. The works by Ale Hop, Ali Eslami & Mamali Shafahi, Dana Gingras / Animals of Distinction, Hugo Esquinca, and Ibrahim Quraishi are the result of artistic exchanges across distances. They involve a wide range of voices including Arca, Peaches, Sam Rolfes, Marie Davidson, Lucrecia Dalt, Patrick Mason, KMRU, and many more. Taken together, they point to potentials, effects, successes, and pitfalls of telematically mediated contact and encounters. How can connections, artistic exchange, and mutual understanding be developed and nurtured when physical togetherness is not possible?

Under the title »Connected Alienation – Bonus Tracks«, several installations are presented in the Kunstquartier Bethanien Projektraum, highlighting works created through some of CTM’s ongoing international collaborations. Commissioned by Nusasonic and Musicboard Berlin, artists Collo Awata and Madam Data will premiere an installation resulting from a months-long residency spanning Berlin and Singapore, titled »Yowa Kontinuum«. Gaspar Cohen digs into the ΚΣΥΜΕ/CMRC Contemporary Music Research Centre in Athens to create »Iterative Cast,« an audiovisual work created within the framework of Chronotopia, a project by CTM and Goethe-Institut Athens. »Fragile Fragments« by pantea and umatic & telematique is a work initially conceived of as a performance, commissioned by MUTEK Dubai, CTM Festival, and Goethe-Institut Tehran.

A limited number of virtual visits are available to the CTM 2022 exhibition and installations – including the »Modular Organ System« as well as the Radio Lab works by Fronte Violeta and Andrius Arutiurian – for those who are unable to join us in person.

The CTM 2022 Discourse series will offer several workshops and participative online formats for Part 1. This edition of the Rethinking Music Ecosystems – an ongoing series aimed at encouraging thinking and exchange on sustaining more equitable music systems – invites Berlin-based collective Black Swan to lead a public presentation and Q&A titled »Prototyping Sonic Institutions« to kick off the project at CTM.

Several discussion modules are also being streamed via CTM’s YouTube channel. Music researcher Shzr Ee Tan will lead a module exploring how we might uncover hidden flows in the world of music and performance, reframing discussions on labour, authenticity, and creation in dialogue with researchers Rehilwe Mooketsi and Anjeline de Dios, who bring specific perspectives from South Africa and the Philippines respectively. Radio Lab Kontinuum commission winner Jonathan Reus will present the launch of »In Search of Good Ancestors / Ahnen in Arbeit,« a year-long sound work exploring intergenerational thinking and voice synthesis.