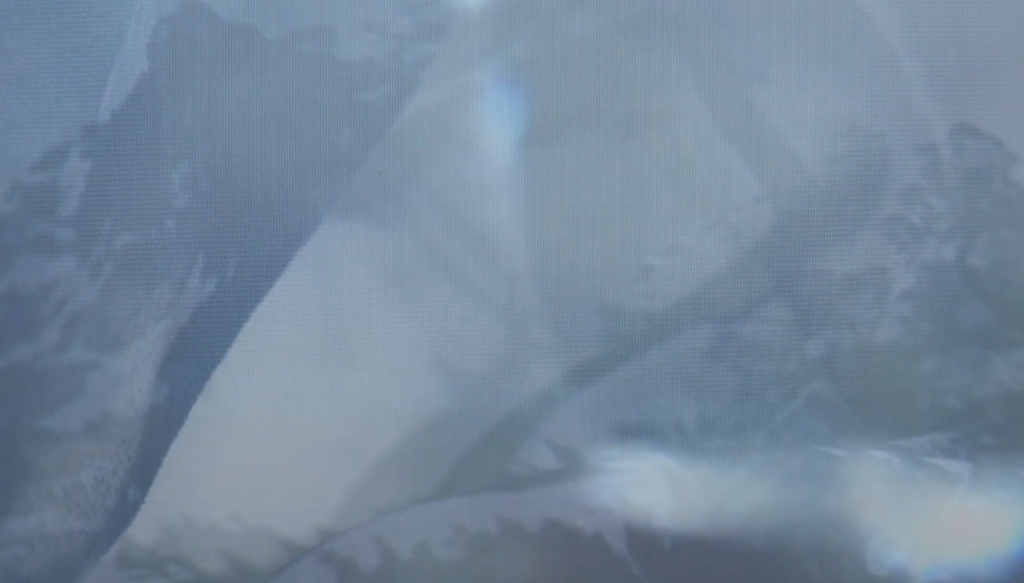 Constellation Records are presenting a new series of videos by artists exploring different currents of electronic music. Today we are premiering Üble Schlucht, the video for one of the singles from Automatisme and Stefan Paulus‘ forthcoming new album, directed by Marilou Lyonnais Archambault.

Automatisme (the Canadian musician and conceptual artist William Jourdain) and Stefan Paulus (Swiss field recordist, ambient musician, visual artist and writer/academic) are releasing their first collaborative full-length album Gap/Void (Constellation, 2022) on May 20. Both artists first met through shared projects with legendary record labels Mille Plateaux/Force Inc, each contributing to the Ultrablack Of Music anthology and Paulus going on to make several videos for Automatisme tracks issued by the two labels.

Gap/Void melds ambient and noise pieces with IDM/minimal techno, it’s amply based on field recordings made by Paulus during mountain expeditions in the Swiss Alps, the Caucasus, and the Arctic Circle—documenting stormy weather, high alpine winds, avalanches, and sounds emanating from glaciers and from the insides of crevices and caves. Paulus folded these recordings into hundreds of layers of sound (like the geological strata of their geographic sources) and sent these ambient/noise pieces to Jourdain as raw material for his bespoke Automatisme technique.

The album’s five tracks feature Automatisme’s trademark interstitial digital synthesis and elastic/erratic signal processing, in combination with his own crate-digging ‘expeditions’ through obscure 1970s-80s disco 12-inches, deconstructing their scores and structures to bring these micro samples and sensibilities back to bear on Paulus’ deterritorialized sedimental source material, the artists share.

For the Üble Schlucht video, they recruited musician and DJ Marilou Lyonnais Archambault, who Automatisme has known for a few years and shared similar interests in dub and electronic music plus abstract landscape visual art. Both began collaborating on different projects, such as another of the Constellation Records audiovisual projects, the Corona Borealis series -which CLOT Mag has featured in the past.

In the Üble Schlucht video, both the visual and the sound work equivalently. Both evoke mountain climbing, hiking rhythms and jumping over a gap. and it is based on a quote by philosopher and Mille Plateaux record label founder Achim Szepanski: We follow the alternate and accidental route of non-representation. It is used to signify the outside. Automatisme’s practice explores pathways of Mille Plateaux’s Ultrablack Of Music movement, processing these concepts in ambient dub techno sound. A guiding inspiration for the artist was to produce music that might have surfaced twenty years ago on legendary dub techno imprint Chain Reaction, but with a more environmental and field-recorded granular sound bank and a more buckled, off-the-grid temporality.

The inspiration behind the video, the artists continue, comes from a similar place as the album, which intends to substantiate the ambling, adrenal trajectories of Paulus’ original mountain climbs, and channel the sensation of jumping over a gap into the void. The Swiss Alps, the speed of the machine, the motorik, the waves, the avalanches, the mirages, the shades of white and blue.

The Üble Schlucht video catches Gap/Void by evoking the iridescence of images of mountains, produced using a selection of video samples from the web, which were then projected and filmed on folded paper structures – le froissement (creasing, crumpling; light trauma or injury) as a gesture of resistance. The videos portray the buzzing of natural landscapes’ ineffable power, the resonance of appearing and disappearing via the manipulation of creased and wrinkled images, like echoes of a sublime natural territory. This eulogizes the non-place as a refuge in post-modern times, in post-internet times.

In the video, Lyonnais Archambault re-borrows copy-paste sound techniques to transpose them to the image, becoming, in a way, a eulogy to vertigo and speed. Searching for video archives on the web, Archambault listed videos from old to current, highlighting scenes shot in the large Swiss Alps. The videos were then projected onto water and recaptured, broken up by the ripples of the waves. In search of a new immaterial, vaporous place; between sea, cliff and sky. A few video feedback segments were also shot and included in the video for giving matter and body to the piece and to perpetuate this celebration of repetition and looping but this time not by the sound, but by the image.

Website https://automatisme.bandcamp.com/album/gap-void
(Video and image courtesy of the artists)