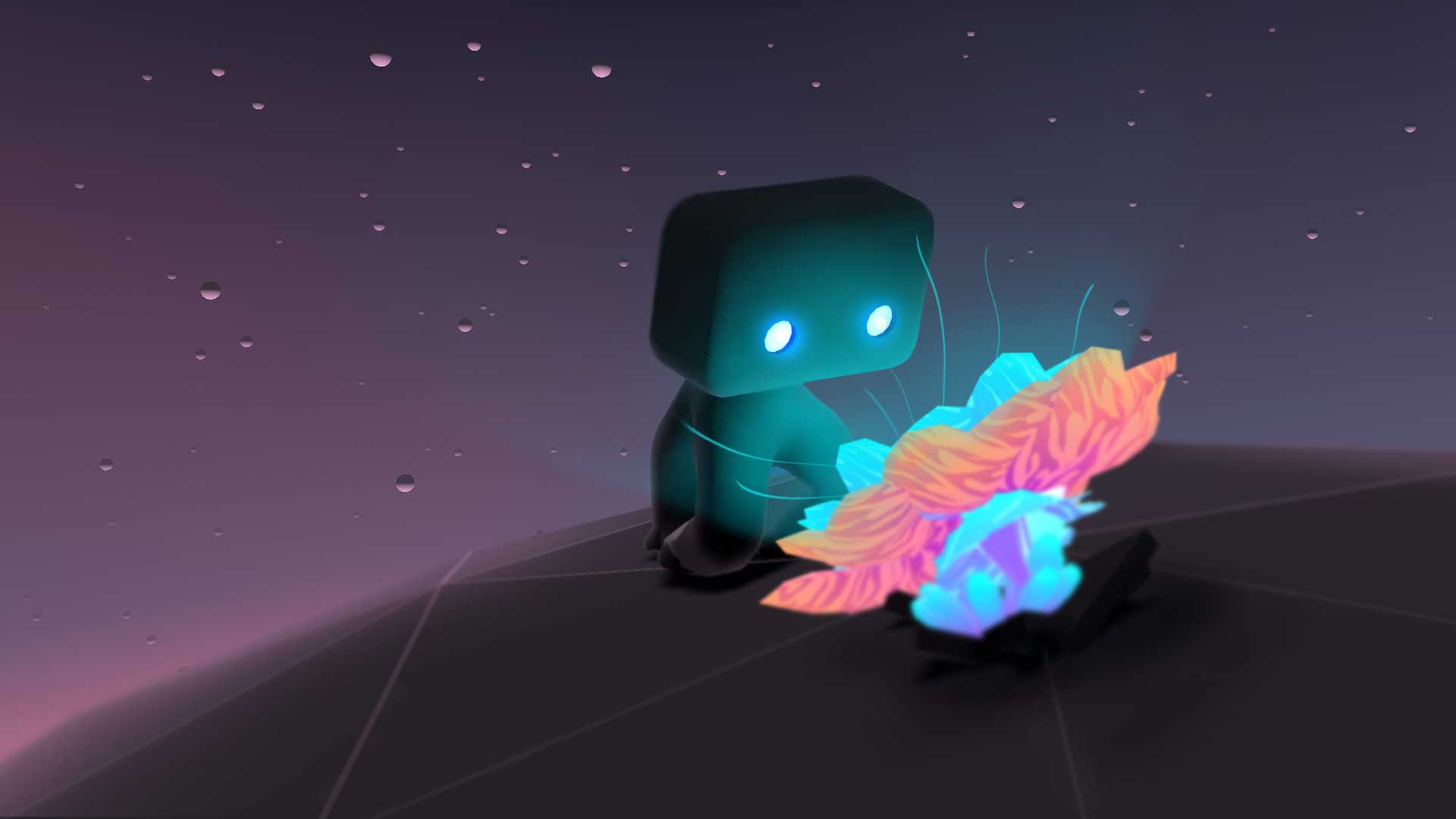 BFI Southbank brought in Ulrich Schrauth to curate their debut Expanded programme of XR work for the 2020 edition of the London Film Festival. It’s perhaps not surprising that Schrauth, one of Europe’s most enthusiastic supporters of VR and XR, comes from a theatrical and musical performance background, given the fact that VR performs the trick of making you feel “in the room”, it has as many similarities with installation and performance art as it does cinema. In conversation on the BFF’s site, Schrauth said about immersion that “factors like interactivity, sound and haptic feedback increase the feeling of immersion. But with immersive art, the aim is not to simulate or pretend that the digital environment is real, but to play with different states and expressions of reality.”

Schrauth studied performing arts at the Folkwang University in Essen and cultural management at the university for Music and Theatre in Hamburg and has since worked all over his native Germany, including as the artistic director of operations of Hamburg’s Thalia Theatre. In 2017 he was the head of programming for the international theatre festival Theater der Welt.

His recent work includes initiating and organising Hamburg’s VRHAM! Virtual Reality & Arts Festival, an event that brings VR work from an international pool of talent into conversation with each other. Each year VRHAM! Hands out a €5,000 award to “the best international VR production” featured in the festival. This year’s prize money was given to Celine Tricart, a filmmaker who has had a guidebook book about VR filmmaking published by Routledge, for her VR work The Key. In an interview about his inspiration behind founding the festival, he’s said: “We needed something to showcase VR artists, and to give artists a platform, and to foster all the possibilities for them.”

Schrauth has also been a jury member for the Fedora Digital Art Prize, France’s Laval Virtual and VREFEST in Rome. He’s spoken previously about his interest in immersive experiences and is also a keen advocate of VR’s transformative abilities when it comes to opening viewers up to new perspectives. Schrauth discusses the recurring themes that make an appearance in the pieces featured in this year’s Expanded programme, as well as his interest in the theatrical side of the physical settings of VR and XR experiences.

What resources and research methods did you use to find the work that was included in LFF Expanded?

For one, we published an Open Call for new work to which artists and creators from all over the world could submit their XR projects. In addition to that, I have a longstanding relationship with a lot of directors, artists and studios and keep updated about their work. And lastly, we reached out to organisations and networks, especially in the UK, who work in this field.

Some recurring themes run through a lot of the pieces, one of the most prominent being the way people negotiate their identities against their situation, upbringing, etc. Were there other themes that struck you when bringing these works into dialogue via their placement in this year’s LFF?

It was essential to us to show a large variety of different voices in this inaugural programme, so we present established filmmakers and VR studios alongside debut projects and emerging artists, all from very different artistic backgrounds and genres. One area of the art form that is fascinatingly strong in this year’s programme is dance, choreography and music like for example with DAZZLE: Solo by artist duo Bruno Martelli and Ruth Gibson, or ALL KINDS OF LIMBO by Toby Coffey featuring Nubiya Brandon and music by Raffy Bushman.

What’s also really important to us is to link the LFF Expanded program back to our film programme and vice versa. So, we are very proud that we have several VR works from directors who also appear in the film section. One of them is Abel Ferrara. His work SIBERIA is part of the LFF DARE strand, and we will showcase the work MISSING PICTURES – Birds of Prey which is featuring one of Abel Ferrara’s never completed films.

Another filmmaker is UK-based director Baff Akoto. His film LEAVE THE EDGES is both screened in the LFF EXPERIMENTA strand, but we will also show his series BLACK (VIRTUAL) REALITY which is filmed in 180°. Also, topics like shared community and underrepresented ethnic minorities are very visible in the curation of the XR program this year, and I think it has to do with the challenging times we live in. Directors want to show that it is more important than ever to come together with other people, share precious moments and create a form of togetherness to regain strength.

There’s a lot of talk of XR work placing experiencers “in the room” in the way that traditional theatrical venues and performances don’t. What are your thoughts on how the atmosphere of the “real” room the headset is in, were there any uses of physical space in this year’s Expanded selection that were particularly striking to you?

This is a development obvious across many artistic works in XR over the last few years, but now due to the restrictions in light of the global pandemic, artists and directors have to find new ways to present their projects without physical interaction. We had a live performance of ANTI-GONE by Theo Triantafyllidis. This exceptional concept creates a new form of hybrid theatre-making in the age of immersive storytelling. Originally performed on-site/in the same room with actors, artistic team and audience members, we presented a remote performance in two different versions: there was a live-stream broadcast of the virtual performance, which took place remotely and simultaneously from Los Angeles and Athens. Also, there was be a virtual live performance of a scene from the piece inside our exhibition area The Expanse.

Given the current circumstances, a lot of effort has gone into making this year’s LFF accessible from homes. How do you think festivals such as LFF may improve their ability to not be site-specific in the future, and is these something festivals should continue to work on even after the current pandemic is over?

I strongly believe in a shared community and that all kinds of artistic works should be experienced together, be it cinema, theatre, concerts or XR/Immersive. We want to share our visions, dreams and longings with other humans in the same room, and this creates another energy than a remote experience. On the other hand, there are a lot of positive effects to a virtual version of a festival: much more extensive outreach (nationally, but also globally), reduced carbon footprint due to less travel activity and broader access for people with handicaps. So, I think that we head towards a new form of hybrid festivals and events, which I find personally very exciting and opens new possibilities and formats to our audiences.

In the instances where people can experience XR work in a physical space, have you come across instances where the gaps and overlaps between reality and virtual reality have been utilised in creative ways, where the setting of a VR installation has played a role in the work?

I have experienced many of these works, but exceptionally striking one was the outstanding piece THE KEY by Celine Tricart, which I saw last year at the Venice Biennale VR. The immersive piece coincides congenially with the physical setting, and there is even a performer inside the space together with the visitor adding an extra level of complexion and meaning, which leads to an extraordinary artistic experience.

In your opinion, what are the key trends in VR art, film and documentary which you think will be front and centre of the medium over the next year or two?

The massive changes that the global pandemic has brought upon us have led to a strong push towards digital habits like remote working, collective virtual experiences and digital connection. All of these trends will influence how artists, creators and filmmakers will decide to share their stories, visions and dreams. I believe that for example, we will experience new forms of virtual and remote entertainment. The first steps towards Mixed Reality concerts and theatre performances have already been gone, but there is much more to come.

Curating extravaganzas change rapidly with the circumstances that surround us in light of the current global pandemic. Still, if I could think freely, I would love to curate a multidisciplinary physical exhibition that showcases immersive storytelling in all its forms and expressions. Using cinema and narration as a jumping-off point, I would like to present different voices from all over the world, who use emerging technologies to shift the way we perceive the world.

“ART” in all its forms. Visual Art, Theatre, Film, Performance, Dance, Poetry, Music – this is what keeps me up at night and going through the day!


(Pictures courtesy of BFI, LFF Expanded and the artists)