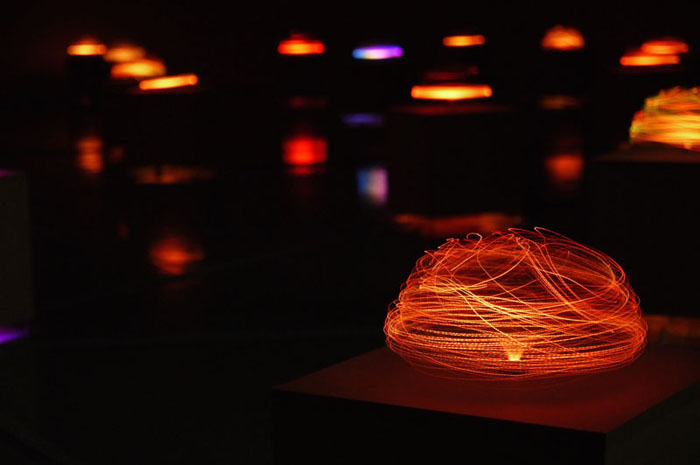 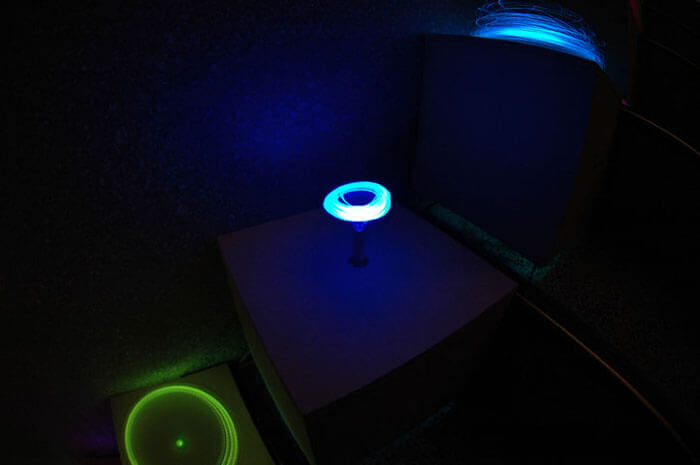 Dr. Yoshimasa Kato is a japanese artist, whose work spans from sound and media art to kinetic light sculpture. CLOT Magazine came across his work through an exciting collaboration project with Dr. Yuichi Ito, for which they received honourable mention in the interactive art category in Ars Electrónica, 2007.  Neurobiology, cognition, sound vibration and sculpture blended and morphed into a performance within close interaction with the audience.

For that project, White Lives on Speaker, brain waves patterns from a member of the audience were processed from an electroencephalograph live recording into software that transposed them into an audio frequency output that was played through a speaker which contained a potato starch solution. Sound translated brain waves created different shapes and forms as sort of mutating little sculptures, one could be tempted to say in-sync with the observer’s state of mind. As the starch could also be touched and reshaped, the artists suggested it also could mean a way in which to physically interact with one’s own mind waves.

More recently, Kato’s interests have moved to kinetic light sculpture. Using fiber optic, LEDs and rotation the artist take us into an interactive interface between media and reality where touch and hands are a central part of the interplay, reminiscent of the classic fine arts, like painting and sculpture or even more primitive forms like pottery. The spectator can interact with and modify the piece of art becoming an integral part of it. For Kato his work is a step forward media art in which the interaction of the media itself with the audience is minimal.

Mirage Flower is a dazzling installation inspired in japanese flower gardens. In this LED and fiber optic light garden, flowers change color, size, shape and movement going through the four seasons in a time-frame of minute: They grow, they flower and they perish in an infinite programmed loop. Audience can touch the sculpted flowers as if walking through a real garden and by that changing their shape and movements. This and other of Kato’s works become such a poetic evocation and reflection upon perception of time, particularly prominent in japanese culture, one in which we are not mere passers-by.

Your work involves or has involved sound, performance, kinetic art, light and new media technology. When and how did the fascination with them come about?

My grandfather is a carpenter who would create various objects at home when I was child. I was able to witness many machines and tools being used, and I was excited to see how products were completed. I understood the joy of creating items, and so I enrolled in the university to learn about art and computers. As such, I was able to learn about new media art.

In particular, during my first electronic project in my third year at the university, I became fascinated by my ability to activate an LED light. Prior to this experience, I thought I would need to buy a moving or glowing device or that I would need tremendous knowledge to create this project. Therefore, I was shocked when one LED light turned on. Since then, I have experimented with a variety of sensors and actuators, and have created installation works.

What are your aims as an artist working in between technology and art?

The relationship between technology and arts is evolving. When a new technology is born, artists use it. Conversely, artists also give birth to new technologies. Technology is often sober and not flashy like as a property man. However, the arts are reminiscent of what is amazing of it. I believe that new media arts should hide and cover these technologies so that they cannot be felt. It is not about being surprised at the greatness of the technology, it is about being able to enjoy the scenes that the art works generate.

My lighted art work (Rokuro) does not use the latest technology that I created, but it was designed to create a new experience of wonder for the observer by combining a variety of techniques used to date.

In White Lives on Speaker, a project in which you collaborated with Dr. Yuichi Ito, brainwaves were converted into sound and the sound waves translated into a sculptural manifestation. What were the biggest challenges you faced for its development?

In WLoS, the brainwaves converted to sound, and conveyed the sound to the speakers to create a form. Ito’s field is audio signal processing. He analyzed and generated the sound. I created an outer frame and loud speakers to support the shape. This work required pouring a high viscosity liquid into the loud speaker, so the speaker needed to be sufficiently reinforced and waterproofed. However, sometimes the speakers were still destroyed within two weeks.

In addition, the loud speaker needed hanging in the air in order not to resonate. This work involved a viewer wearing an EEG, so we did not want the sound alone to affect the viewer’s brainwaves. However, it would remain exposed to the low-frequency sound of the body. After an hour of the experiment, we were become tired by the sound.

Currently, I often conduct workshops for children, and I discuss how it is fun to create things. If they can imagine creating things on their own, their worlds will change. Everyone has a computer, so it is possible to create works. In addition, they can also be presented on the Internet. It is not important to use new technology, but it is important to have a unique perspective. I hope to share it.

Knowledge. I have a habit of believing I cannot realize an idea if it is beyond my knowledge. Therefore, I attain variety of interesting information on a daily basis and increase my abilities.

Curiosity about the wonders of the world. We have to continue be sensitive to various things in order to create something new.

(Photos and videos courtesy of the artist)