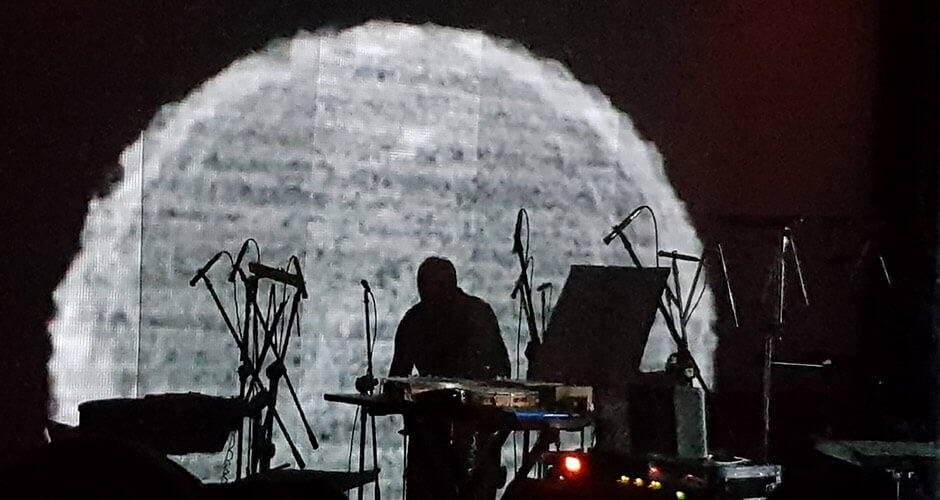 Presence, the state or fact of existing, occurring or being present; a person or thing that exists or is present in a place but is not seen.

Presence was this year’s theme of Unsound festival and under this premise, the organisers curated a program in which talks, film screening, panel discussions in the daytime discourse intersected with sound, music and visual shows to explore what Presence is. Alongside the programme, the graphic image of this year gracefully brought the theme of presence too, as a sort of post-postmodern The Garden of Earthly Delights (Hieronymous Bosch, 1490-1510), a triptych in which the central panel represents the panorama of paradise lost. The image takes on this dystopian paradise, the “nostalgic retreat to a time before mediated existence”. And as enigmatic as the painting, the illustrations of Aleksandra Grunholz reflect the illusion with satire of these parallel existential dimensions that humans have created. What looks like an innocent pastoral image, upon close-up examination, it reveals a more sinister side of the story, confronting scenes that depict some of the current technological horrors [auto]imposed onto our societies.

And how technology relates to artistic production? The conception of technology in Western culture has been and it’s still defined by its shifting relationship to the realm of art. Art and technology have always been linked, in the Greek root of the word technology, technē- is translated as “art”. Although Heidegger argues that this close relationship between art and technology so visible in ancient Greece has been lost in modern societies, the history of modernity can be understood as a representation of the aesthetic of technology through art: its what Heidegger calls “the essence of technology”. This concept of “essence” does not only represent the modern definition of technology as a tool, instrument or machine but it represents the broader concept of making or producing, including the artistic production of art.

Going back to the Presence theme, Unsound’s team asks:  ‘What does it mean to be present in a world of media saturation, where reality can be virtual or augmented, intelligence made artificial?’. Blockchain, cryptocurrencies, social media bots, Alternative realities or data harvesting are [immaterial] concepts – but with tangible applications – that are becoming intensely present in our everyday lives; but how do we relate to them? How do we bring together technology and art in a post-postmodern society? How does one understand nature, when it exists as a place to be visited rather than lived in? How do we engage deeply in a world of surfaces? To explore some of these questions and engage with the idea of Presence the festival programme tackled it from different angles.

A new commission for Ephemera reflected on the persistence of natural environments. The Ephemera project was launched in 2014 and is curated and produced by Malgorzata Plysa and Mat Schulz. Ephemera aims to showcase synesthetic immersive installations, blending smell, light and sound. The nose behind the project is Berlin-based Geza Schoen and for this new commission, Foris, Chris Watson, a legend in field recordings of wildlife and natural phenomena and a founding member of the influential industrial band Cabaret Voltaire, provided the sonic material and MFO the immersive light installation that aims to spark awareness in the current era of the Anthropocene. Entering an immaculate white room, you were seated in the middle, on comfortable puff seats and surrounded by 3D spatially distributed speakers. For a whole 40 minutes, you were left to listen to the soothing surrounding sounds of birds, storms, baboons and all sort of wildlife found in jungles and forests which increased in intensity towards the end of the piece. 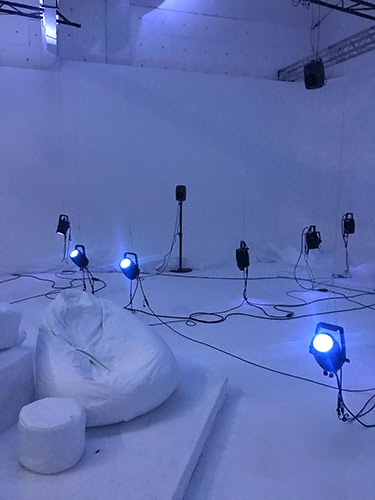 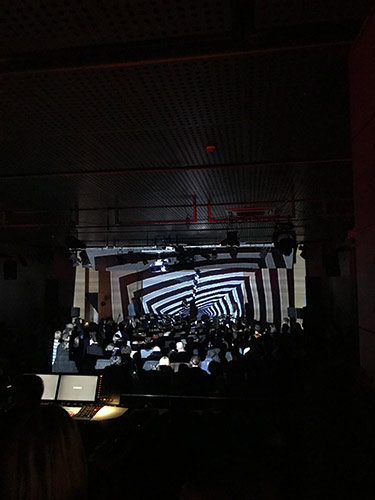 Chris Watson’s field recordings expanded five continents, from the ancient eucalyptus forests of Kosciuszko Park in Australia,  the tropical forest La Selva in Costa Rica, or the Riverene woodland of Masai Mara in Kenya to the Taiga forest in Finland while an aromatic mist was also filling the room, specially designed by Geza Schoen, it tried to recreate the smells of wood, moist and fog. As a contraposing experience, another installation, literally just below Foris, in an abandoned dark, damp and sombre warehouse space.  Artist Miroslaw Balak recreated his archival sound piece a, e, i, o, u, a work of field recordings of dogs barking and howling recorded at Celestynów Dog Shelter on this occasion installed in the 19th-century corridors of the former army basements at ul. Kamienna 12. A claustrophobic and sinister installation that explores the presence/absence of the human condition.

Chris Watson, as well, was at the panel Apocalyptic Tourism / Loving a place to death moderated by Luke Turner from The Quietus. During one hour they exposed some thoughts about the environmental impact of how we travel. Turner was also in conversation with author, sonic researcher, and curator Kristen Gallerneaux. This year she was presenting a new film, that she has fully directed and produced, The Hum. With a very marked noir aesthetics, Gallerneaux has reconstructed a visual sonic impression of the hum — vibroacoustic effects of infrasound that affect people, animals and landscapes.

Another installation worth mentioning was SENSTER, derived from the words sensitive and monster, is an interactive cybernetic sculpture made by Polish sculptor Edward Ihnatowicz at the end of the 1960s in London. A pioneering work in new media art SENSTER was supported by the electronics and electrical company Philips and since the 1970s  remained motionless. Re:Senster it has been reconstructed and now reacts again to sound and motion. The massive kinetic sculpture was premiered for Unsound.

Also remarkable from the daytime program were the talks Swarm Producing presented by Lars Holdhus and Andy Battaglia’s talk Here, There, Everywhere (a title also evocative of a Revolver-era Beatles song). Artist and producer Lars’ practice includes visual art and lectures on subjects like alternative currency. His talk put light on swarm production, a unique way of collaborating using crypto-economics and cryptocurrencies. Holdhus presented a bunch of new tools not used before for music productions like bots, AI, blockchain and DAO (Decentralised Autonomous Organisation).  Andy Battaglia, editor at ARTnews Magazine, introduced us on what Presence is for him. Through the work of artists like James Turrell, Robert Irwin, Walter de Maria or Julia Pallini, Battaglia explored how conceptual art is a kind of presence, a feeling that does not need to be dependent on words or language. 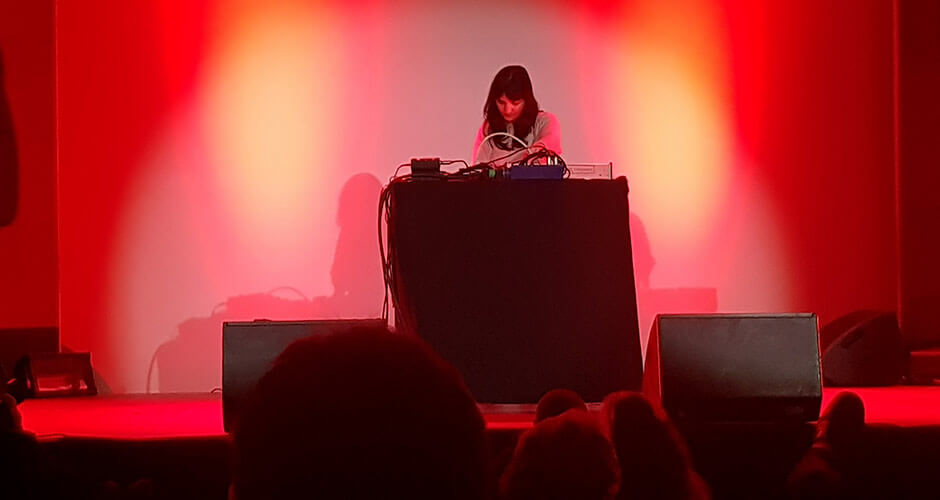 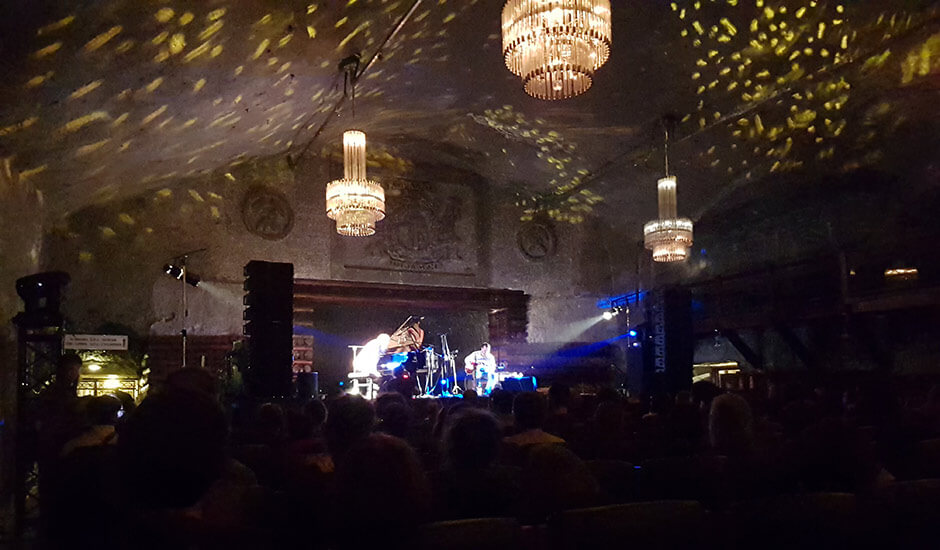 This year we also managed to catch two of the morning sessions. Almost envisaged as early meditation exercises both Sarah Davachi’s delicate drones and legendary polish tuba player Zdzislaw Piernik joined by also improv-duo HATI adventurous performance which took place in the Synagogue Temple, one of the most special locations of the festival, meant a beautiful way to get started into the day. Also performing at the synagogue, and in almost complete darkness, Lea Bertucci’s gig was something really unique, with the venue enhancing the artist’s explorations into resonance. Following her and rounding up a double bill of really haunting sounds, Todd Barton & the kesh Unsound performed Music and poetry of the kesh, the unique album of songs and poetry Barton composed in 1985 with Ursula K. Le Guin. This was the first time the album was played live.

There couldn’t be a better place to stage Lucrecia Dalt to present her most recent album, Anticlines, than the Wieliczka Salt Mine but her music and singing, which are particularly intimate, unfortunately, didn’t benefit of the ballroom dimensions. Terry Riley performing with his son was another highlight programmed at the salt mine, seeing such a legend playing live turned out to be a quite emotional and sentimental moment.

Another of the central venues of the festival, ICE, kept programming poignant performances throughout the festival; from the artistically brutal House of Kenzo with DJ Rabit and video artist Sam Rolfes, to the emotional landscaping synthy drones of Caterina Barbieri and what for us was one of the main highlight of the festival, Company Wayne Mcgregor presenting Autobiography edits, a compacted version of Wayne Mcgregor’s dance work Autobiography, which is inspired by the dancer’s genetics and DNA accompanied by Jlin’s musical compositions. The fierce and athletic movements of the dancers were a hypnotizing sight; anyone with a  bit of a soft spot by anatomy would be amazed by the tension and distension of muscles and bodies enhanced by the perfectly matching soundtrack. Mat Schulz, director of the festival told us that it got one of the biggest ovations of the history of the festival.

The festival this year closed with a tribute to Jóhann Jóhannsson, who passed away early this year, and the usual closing party for those who like to be taken to the small hours. Jóhannsson was a prolific composer who wrote music for theatre, dance, films and television. In his compositions, he blends traditional orchestration with electronic music. People at Unsound put up a special evening in which friends and collaborators of Jóhannsson like Hildur Gudnadóttir, Robert Aiki Aubrey Lowe, Erik K. Skodvin, and Sam Slater played together with Sinfonietta Cracovia.

At the closing party Powder and Debonair, put the end with two of the most satisfying techno sets of the festival, both with a very different style, from the more polished and technical of Power and the ravey muscular and powerfully fun of Debonair’s we ended another of the long nights and the last day of the festival, taking the cab back to the apartment with the usual big smile on our faces.

In his book For a Critique of the Political Economy of the Sign, Jean Baudrillard speaks of a techno-cultural mutation based on technological and cultural changes (concerning postmodernity*) that could be translated in the way we relate to technology. We engage and interact more in the virtual world than the physical world, and this makes our social identity and environment more and more immaterial. This year’s theme of Unsound PRESENCE paired with the current situation of a modern society in which more than the technology itself, the way we use technology is what is reshaping our reality. 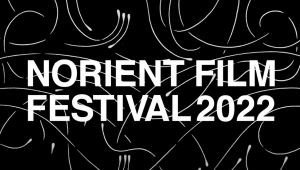