Unsound Krakow 2017: The Day After 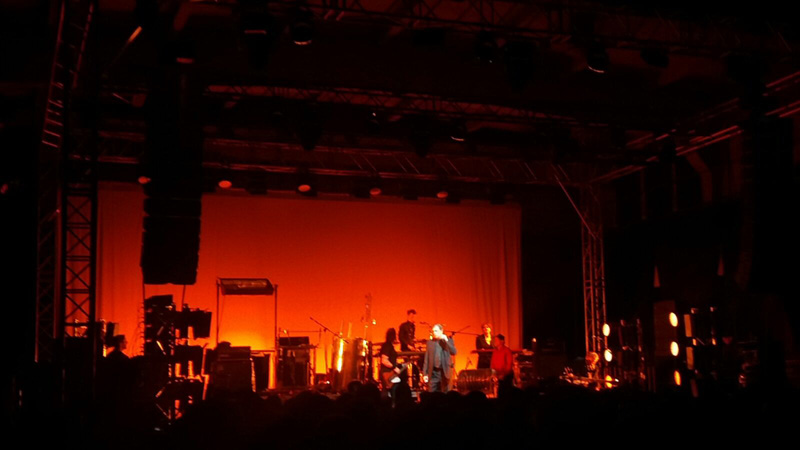 Wolfsbane, Nightshade, Maidenhair and Foxgloves (genus Aconitum, Solanaceae, Adiantum and Digitalis, from the Latin), are some of the flower families that shaped the programme of this year’s Unsound Festival theme – Flower Power. These names brought us memories from college days spent studying Botanics.  We once had to craft and stock a herbarium with specimens identified following the international plant name index –aka the ‘Bonnier’– a delicate and dedicated endeavour that took over months. Gaston Bonnier (1853-1922), considered the father of the modern botany, was a French botanist that transformed science with his studies of plant physiology based on classification, analysis and description. For Bonnier, a botanist picks up flowers and plants in the woods, flattens them between sheets of paper to finally name them (always in Latin) and keep his or her personal compendium. The compendium doubles as a personal diary of visited places and flora therein. So, as sort of botanists, during one week at Unsound, we picked up discussions, performances, and installations to make our herbarium of what we saw, listened, and intensely experienced.

2017 marked the 15th anniversary of Unsound, and the Flower Power theme felt in syntony with the current times. As Mat Schultz, the festival co-director said,  ‘the Flower Power is reflecting darkness and light, growth and decay, ecological vulnerability and resourceful regeneration’. The theme embodies a period of social contradictions and political oppression but as well a period of fight and resistance. Ecological awareness and dark ecologies in the Anthropocene era, as Timothy Morton argues, “take the form of a strange loop or Möebious strip, twisted to have only one side, because ecological phenomena have a loop form that is also fundamental to the structure of how things are”. And in so, Unsound’s programme took us into this continuum of performances and ideas inspiring, and cohesive as usual.

Luke Turner from The Quietus presented the talk ‘Uprooting Babylon-The Forest as Counterblast to the Hollow City’, a trip among myths and narratives of forests via sexual narratives, gender identities, and political points of views, which made us expectant of the book he is preparing on the topic. It was enjoyable to be guided by his words on how nature and the forest especially can be a sombre place where forces of the darkness and the unknown seem to prevail.

In the discussion ‘After Mark Fisher’ Lee Gamble, Lisa Blanning and Agata Pyzik explored the legacy of Mark Fisher sharing their thoughts on Mark Fisher’s connections between capitalism, philosophy, music, and film. Mark Fisher was a writer, critic, theorist, and teacher based in Goldsmiths, University of London. He started blogging early in the 2000s as “k-punk”, and his writings on electronic sound, popular culture and radical politics are among the most influential in modern culture. He committed suicide early this year shortly before the publication of his latest book The Weird and the Eerie (2017). 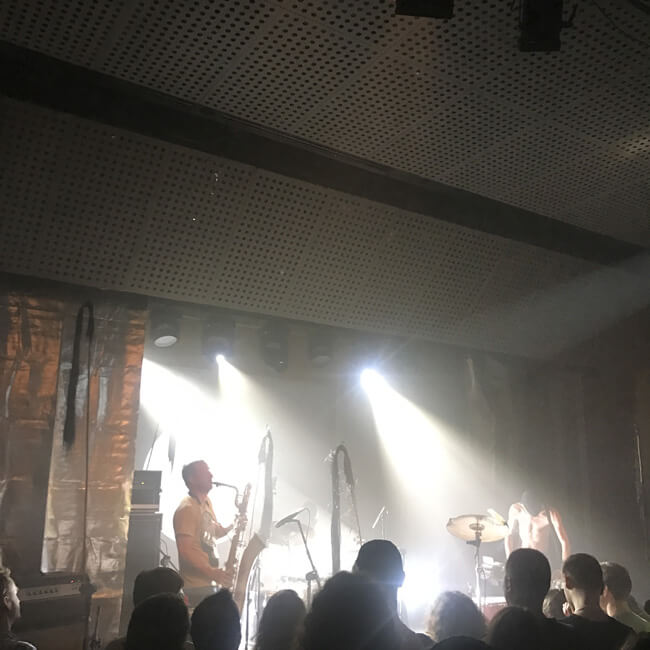 Women had once again a notorious representation in this year’s edition of Unsound. Pan Daijing, Siksa, Puce Mary, Laurel Halo, Ewa Justka or Nina Kraviz crushed the patriarchy with their performances. On the other hand, the talk ‘Loving Music that Hates you – Navigating Misogyny in Music’ centred the discussion around the book of essays by Rhian Jones, Eli Davis and Tamar Shlaim Under my Thumb – Songs That Hate Women and the Women Who Love Them (Repeater books, 2017). The conversation navigated into misogyny from different points of view, not only as fans and critics but also as women who listen to music.

As some flowers only bloom at night, we headed to Manggha on Wednesday and Thursday and then to Hotel Forum in the evenings of Thursday, Friday and Saturday in search of the most dancey, but not for that less cutting-edge sounds. During the first evening in Manggha Siksa, Puce Mary and Polish band BNNT joined by Swedish saxophonist Mats Gustafsson made us jump with industrial noise sounds of the group and Gustafsson’s hyperenergetic saxophone style. On the second night at Manggha we saw Laurel Halo presenting her recent album Dust as well as the noise and psychedelia of Bristol-based band Giant Swan. Wacław Zimpel and Kuba Ziołek’s were another of the highlights of the night.

Another aspect present during the entire festival was the collision of the natural and the industrial, as an act of brutal force where the winner is uncertain. Projects such as NIHVEK, a collaboration between Liz Harris (Grouper) and Marcel Weber (MFO) with ‘After its own death’. The project, commissioned by Unsound, the Barbican, and Goethe-institute after the Dislocation edition last year was developed in Murmansk, a remote region in the Russian Arctic, and depicts the images and sounds of the large snowy extensions of land juxtaposed against the industrialised city background. James Hoff presented his last project HOBO UFO (v. Chernobyl), where he used hacked Google cameras in the vicinity of Chernobyl. The show was a frantic concatenation of hardcore beats which together with the images leaves you with a feeling of sneaking into a place you shouldn’t be and rushing to escape from it. The cameras show the recently Google-mapped town in Chernobyl’s Zone of Exclusion where nature has taken what humans left behind. Earlier in the day, he presented his work in a talk moderated by Andy Battaglia, editor of ARTnews. Hoff explained the genesis of some of his works, from paintings to music-making.

From the remains of the post-apocalyptic landscape of industrialisation to one of the key pioneers of industrial music, Einstürzende Neubauten. As a perfect symbolic match, the concert took place in Teatr Laznia Nowa. The building is located in the district of Nowa Huta which was built from the ground up during the 1950s’ Communist policy of Socialist realism; District of Nowa Huta, built as a satellite industrial town by the communist government, always evoked strong emotions. Planned as a vast centre of heavy industry, Nowa Huta was to become also an ideal town for the communist propaganda. The evening had started with Ben Frost presenting the release of his new album The Centre Cannot Hold. The visuals from MFO where a mesmerising mix of projections onto plastic stripes that made the illusion of lurex and liquified metal curtains. 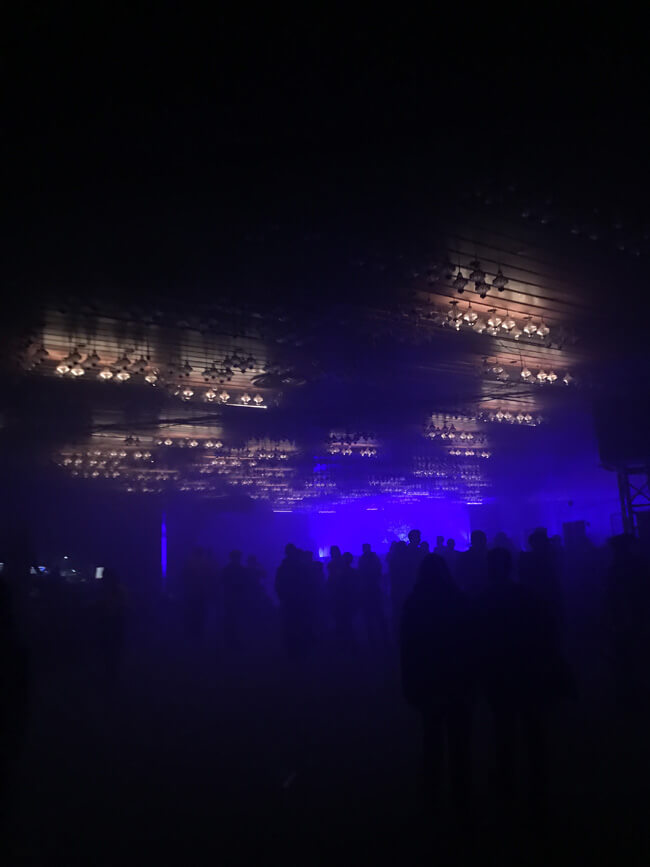 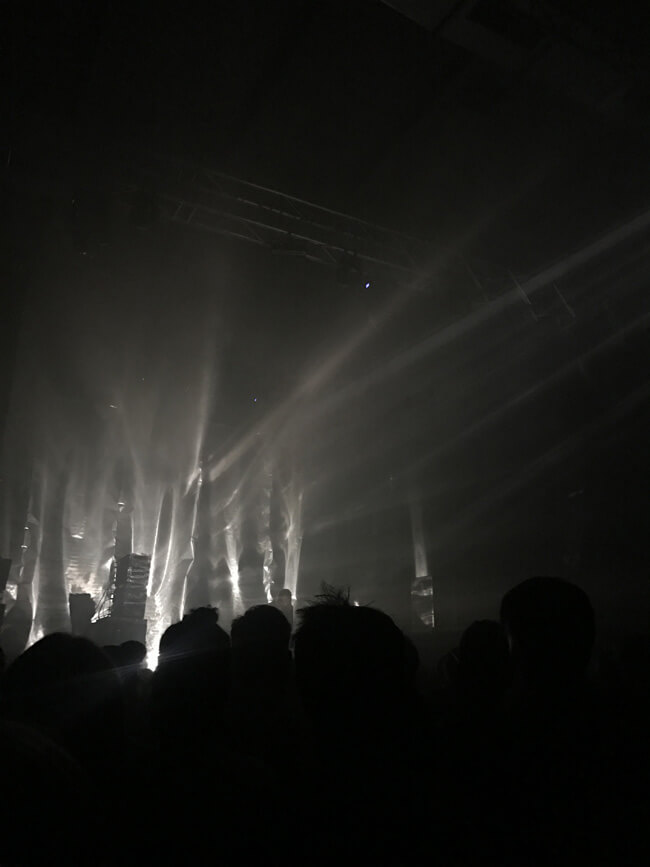 Mixing nature with the most elegant experimental electronica, we were lucky enough to experience two of our favourites gigs of the festival: Dominick Fernow’s Rainforest Spiritual Enslavement and Wolfgang Voigt’s GAS, both with new albums published recently. It was the world premiere of Rainforest’s live show, and it exceeded all our expectations. The immersive ambient and organic sounds grew into an intense synth crescendo for a magnificent end. J.G. Biberkopf’s show was another of our favourites. The Lithuanian’s productions reflect on global politics, power and Earth’s ecosystem and his albums Ecologies and Ecologies II: Ecosystems of Excess extended into a perfectly executed live set.

Not to forget the fascinating intoxicating plants that have attracted and haunted humans for centuries.  We let our senses be transposed by shows such as Híbridos, an experimental ethnographic study of spiritual cults in Brazil by Vincent Moon, Priscilla Telmon and Rabih Beaini. Pharmakon, Karen Gwyer, Moor Mother and Lena Willikens b2b Vladimir Ivkovic and Visible Cloaks were some of the other acts that heightened our senses. The Visible Cloaks’ live show was 40 minutes of saturated colours and patterns with soothing sounds transported us far away from Krakow’s more wintery landscapes. With material from their recently published mini-LP Lex and previous album Reassemblage (both published in 2017), it was a meditative journey sliding through tapestries of sound and visuals.

After the week at Unsound, already back in London, the opening words of Thoreau’s Walden kept lingering in our minds: ‘I went to the woods because I wished to live deliberately, to front only the essential facts of life, and see if I could not learn what it had to teach, and not, when I came to die, discover that I had not lived. I did not wish to live what was not life, living is so dear; nor did I wish to practice resignation, unless it was quite necessary. I wanted to live deep and suck out all the marrow of life.’

Ours hasn’t been a time of Spartan life or sacrifice as the personal journey Thoreau embarked in, but one of pure self-indulgent pleasure. And, messianically, year after year we go to the forest of Unsound to feel alive and to live deliberately. 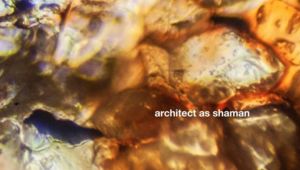