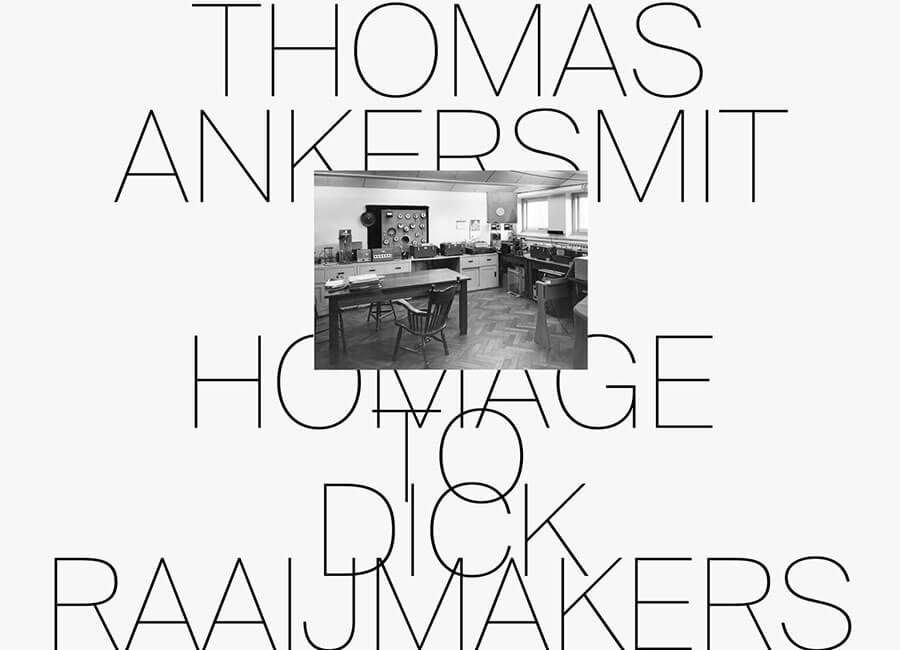 Thomas Ankersmit is a musician and composer based in Berlin and Amsterdam. Working primarily through sound and installation, he produces complex and incredibly physical pieces of music. Primarily using the Serge modular synthesizer system since 2006 (both live and recorded) his work explores the psychoacoustic and physical properties of sound, experimenting with sound reflections, infrasonic vibrations, otoacoustic emissions and highly directional projections of sound.

The work is also dedicated to Ankersmit’s late father, Thijl Ankersmit (1947-2016) whom he credits with introducing him to the concept of feedback, utilised throughout his career. In “Homage to DIck Raaijmakers” electronic feedback is utilised as a means of sonic sculpture, foregoing the use of samples or field recordings, Ankersmit generates sounds that could be described as cousins to physical phenomena such as earthquakes or storms using his modular system. Within this context, an important acknowledgement is that these associations are built in the mind of the viewer as opposed to intentional constructions. Ankersmit refers to this as “Shadow phenomena of hearing” an example being otoacoustic emissions, the ear producing its own sounds in relation to stimulus tones within his music. The use of the Serge modular synthesiser impacts heavily, with the live production element especially important. The synthesiser’s ability to glitch, distort signals, create internal feedback and bursts of sound impacting other sounds already in motion are integral to his work. The system allows for exploration of tight, calculated tones as well as exploration of sonic impurities.

Homage to Dick Raajmakers is a unique listening experience falling in a glut of experimental releases. Ankersmit explores the depths and limits of the Serge modular system, working up sonic clouds of electric feedback, encouraging the listener to probe deeply – excavating the hidden sounds from the pulsating mass. Using (and misusing) analogue technologies, Ankersmit builds dense soundscapes cut with modular tones and creeping textures. The swirling dynamics juxtaposed with analogue micro-sounds swarm into three-dimensional compositions. The piece comes along with the advisory to play it through speakers, as opposed to with headphones. The purpose of this instruction comes from Raajmakers’ research into holophonic tones – the idea that holophonic soundwaves are able to induce or stimulate realistic, multi-dimensional sounds within our inner-ear. In listening to “Homage to Dick Raajmakers” sounds are produced that are not within the recording, entirely unique to the listener, affected by the environment to such a degree that even slight movements of the head can change them entirely. A chord may appear with your head positioned directly in front of the speakers, but dissipate almost entirely if you move to the right, for example.

“Homage…” is a work exploring a variety of analogous experiences through synthetic creation of sound, allowing for incidental relationships between the sonic properties of the piece, the environment in which it is played and the listener. It utilises the malleability as something which can induce a physical experience for the listener.

Ankersmit’s work and practice broadly focuses on the physicality of sound and the affective properties therein. This extends to an exploration of sound as something that interacts not only with the listener but also the space around it, functioning differently in different situations, as a sort of sculptural tool.

You are a musician and composer who also describes himself an as a painter with sound. Space and spatialisation of sound are also at the centre of your practice. How and when these interests come about?

“Painter with sound” sounds pretty ridiculous but I guess what I meant was that I work with one particular medium and that I shape the sounds by hand, layer-by-layer. Since about 2012 I’ve basically only used the Serge Modular; no other instruments, no other sounds.

I’ve always thought, or at least fantasised, about music as a three-dimensional presence, as a complex shape in a room. An early memory is being on a big outdoor ice skating rink as a kid, with music playing over speakers, and hearing the music in several time-layers from nearby speakers and from afar, delayed. I started visiting New York in the late 90s as a student and would go to La Monte Young and Marian Zazeela’s Dream House installation sometimes, Phill Niblock concerts, etc. Alvin Lucier was another major one or performing inside a Richard Serra installation – with these very distinct sound reflections that change with every step – in my early saxophone days.

You mainly use an analogue serge modular synthesiser for your productions. What are its acoustic characteristics that make this instrument so unique for you? How does it relate to your approach to reverb and other acoustic phenomena?

Back when I played the saxophone, I basically thought of it as a hand-held square wave generator attached to a horn. I’d use it kind of like a sonar; reflecting sounds from the surfaces of a place. There’s a beautiful book (recommended by Alvin Lucier) about echolocation in bats and other animals called “Listening in the Dark” that was an inspiration there. I’ve always admired bats and the elegance of echolocation.

I don’t think I’ve ever used a digital delay or a tape delay though. I don’t like to simulate room acoustics; I just them when they’re there. The Serge Modular has an analogue delay module that I’ve come to appreciate a lot, but it doesn’t sound anything like an echo. The main thing about the Serge for me is its combination of precision and its potential for sound-mangling. It can be extremely clean and precise when you want it to be, but it’s also very experimental and open in its design. Serge offered many different processing modules (four different filters, or three different wave multipliers, for example, each with its own sound) so it seems to have been aimed at sound-sculpting from the beginning. And it’s very feedback-friendly, because the modules are relatively simple building blocks each with their own inputs and outputs, instead of building all the interesting wave-shaping stuff into the oscillators themselves for example. And it’s compact enough to bring four panels as carry-on!

Your new album Homage to Dick Raaijmakers is an all-analogue electronic music composition inspired by Dutch composer and multimedia artist Dick Raaijmakers. In it, you play the Serge synthesiser as a kind of weather system. Could you tell us more details about this and the intellectual process behind the album?

Dick Raaijmakers is a very influential figure in Dutch electronic music and sound/media art, but not so much internationally. For one thing, he never once travelled outside the country (!).

I’m not a Raaijmakers expert by any means, and unlike lots of people I know in the Netherlands, I never met him personally. I only know his work through books and records. But he was always one of the few people in Holland whose work resonated with me. His music from the sixties alternates between a kind of proto-noise music and a proto-microsound music. Pieces like the “Canons” series, “Flux”, “Plumes”, “Ballade Erlkönig” for example.

For this project, I simply went back to his writings and his music and tried to reshape some of the ideas into my own. It’s a pretty relentless focus on feedback, on chaotic electric sounds, on a kind of stark “greyness” of the music, and also on very small sound elements. The contrast between raw, electric, abstract sounds on the one hand, but also a kind of similarity of these to “natural” sounds interested him, I think, and me as well. Electronic static can sound like rain, a burst of random voltage can sound like thunder, etc.

My dad passed away while I was working on this music. When I was a kid he showed me how to make feedback for the first time, with a guitar and an amplifier he’d built when he was young. When I heard that feedback screech for the first time as a teenager I was like “OK I don’t want to be in a band anymore, I’ll just do this”. Raaijmakers’ speaking and writing (in Dutch) also kind of reminds me of my dad’s, his sense for language and humour; suggesting a microphone-less wire instead of a wireless microphone for example, or comparing feedback to a cat playing with its own tail. So the two got entangled a bit.

What has been your most challenging composition or project and why?

I’m rarely happy with the music I do so to me it all seems challenging, even when it probably shouldn’t. Maybe a commissioned project I did for CTM and Berghain in Berlin, early 2017, based on the architectural resonance of the building.

The soundchecks were fantastic; the sound engineer and I did them in the middle of the night after the Berghain employees had all left because everyone in the building had complained after the first try. Berghain has this incredibly powerful 6.1 PA system and we turned it up 100%, which they normally never run it at. The engineer was like “You mean all the way up? Like actual full capacity? We’ve never really done that before, but sure!”. The vibration was so intense that we were holding on to tables and railings to not lose our balance. Berghain is a big, complex space made out of concrete, metal, and glass. The vividness of the building’s response was very beautiful. Just by varying frequencies and intensities slightly, all these creaking/moaning/breathing sounds would emerge from one of their metal staircases, for example.

But CTM events are always completely sold out it seems, so the place was completely packed; people in thick winter coats squeezed into every corner. And then all the subtle resonances were gone and I felt like I was flying blind. Oh well.

You have a residency at Monom and the Spatial Sound Institute, what are you exploring or developing through it?

MONOM is “Berlin’s centre for spatial sound”, it’s a place where artists can develop and perform music with really intricate three-dimensional distribution. It’s based on a system called 4DSOUND (I suppose the fourth dimension here is time?). They’re constantly expanding the software to do new things.

It’s the most convincing spatial sound system I’ve heard so far; you can really create a whirling tornado of sound, or a flock of birds passing overhead, or sounds that seem far outside the walls of the space; far out in the distance. Of course, a challenge with any high-tech speaker system like that is to what extent the music can be performed outside of that one place. But it’s exciting to have them in Berlin, and they’re planning to go on tour with work by a number of artists starting next year. So far, I’ve mostly been playing around with Serge noises in large swarm/storm aggregates; a kind for disaster cinema for the ears.

Getting distracted by other stuff, and giving up too easily if the “creative process” gets difficult or boring momentarily. Same as with most people I imagine.