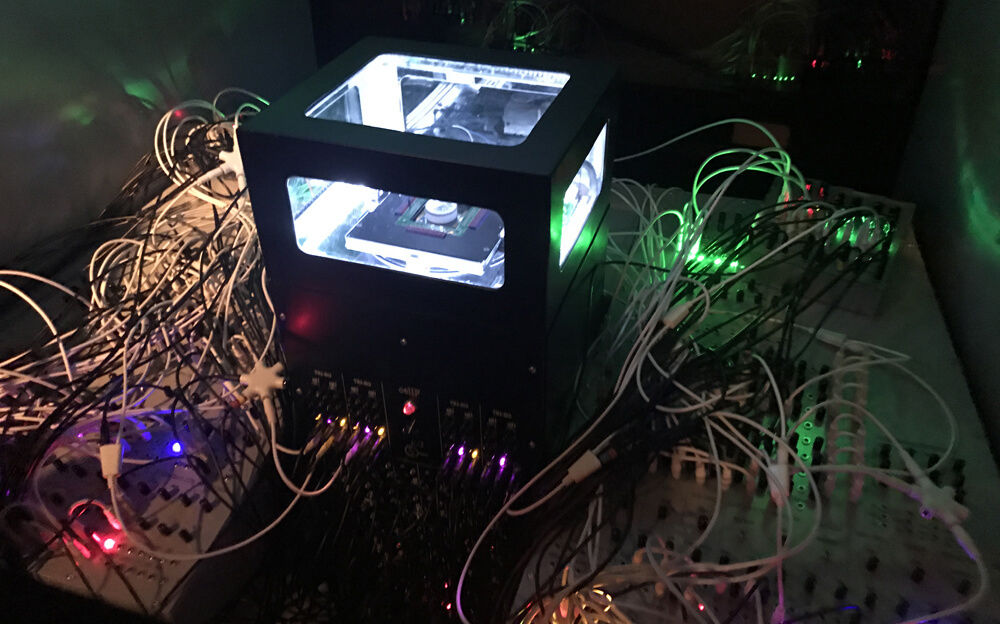 How can music respond to the intertwining of natural, social and technological processes? HKW (Haus der Kulturen der Welt) in Berlin, in cooperation with CTM Festival, has been elegantly presenting us with current artistic explorations addressing this question.  The Technosphärenklänge series (Sounds of the Technosphere) [1] aims to explore current practices in sound and music by reflecting on the existence and state of the Technosphere—the contemporary global structure with closely coexistent human, planetary and technological processes—and its conflicted interaction characterises the Earth’s current geological time, the Anthropocene.

Across the different iterations, the team lays out a programme driving us into fertile territory for intellectual reflection and, possibly, a further understanding of the paradigmatic practice changes we are experiencing by “listening” to the sound of this new technosphere. Technosphärenklänge #2 took a look at the interconnections of music, mathematics and technology (with artists Holly Herndon, Tim Hecker and Lorenzo Senni) while Technosphärenklänge #4 focused on the 50-year anniversary of Morton Subotnick’s seminal release, Silver Apples of the Moon (1967), the first electronic composition ever that was especially conceived for a vinyl release. Technosphärenklänge #5, the latest in the series, explored sonic speculative fictions linking human bodies and consciousness with non-human environments and data-driven technology by the work of Lucrecia Dalt, M.E.S.H. and Amnesia Scanner. 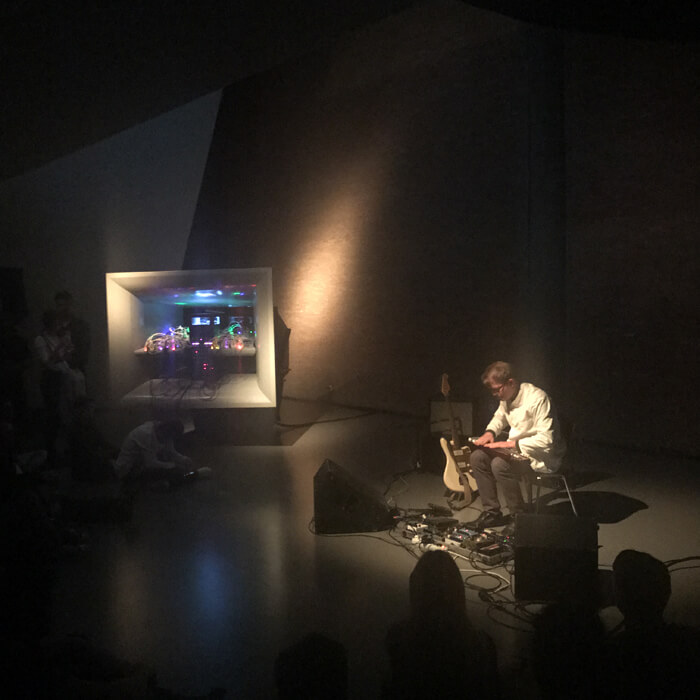 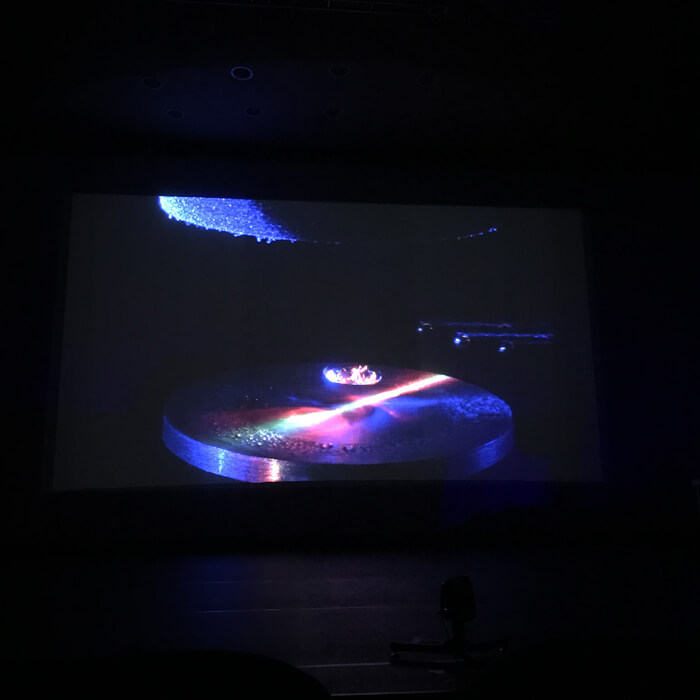 CLOT Magazine partnered with HKW/CTM to cover Technosphärenklänge #3 in May 2017. The third installment of the series this time focused on sound projects which operate at the interface between art and science. On the first day, three jaw-dropping projects were presented; the world’s first neural synthesizer that performs with human musicians, water droplets levitated and shaped by sound waves and magnetic forces, and the interconnection of spatial sound and high-energy lasers used with a epic precision and creativity. The following day, lectures and talks hosted together with Art Laboratory Berlin explained the research and science behind the performances and discussed the works’ social implications.

cellF, which CLOT Magazine has previously featured, is a piece by Guy Ben-Ary and collaborators [2] that represents a radical new way to think about what a musical instrument can be and how music can be made. In cellF, human neurons grown in a Petri dish form a reductive version of a living “brain”, which is used as of an analog electronic synthesizer. Using the properties of these neural networks,9 neurons accumulate electric potential and can fire a response that can be amplified and translated into an interface made of an array of analogue modular synthesizers. The piece forms an autonomous wet-analogue cybernetic musician capable of entering into musical dialogue with human musicians. This time these were the guitarist Schneider™ and vocalist Stine Janvin. The human-made music fed into cellF’s neural networks as electrical stimulation. The network’s reactions to the artists’ impulses resonate through its modular synth body, creating reflexive and improvised post-human pieces of music resulting from the communication between human and non-human musicians.

We had a chat with Schneider™ before the event, asking him how he got involved in playing alongside cellF: Jan Rohlf of CTM asked me if I would be interested in improvising with this rudimentary artificial brain being connected to a modular synthesiser …how can I say no? In general, I am most interested in communication through sound these days, and this is an excellent occasion to get in contact with something else than the usual another musician (s) or a normal human. I will bring different kinds of equipment to process the sound of an electric guitar to have diverse sound possibilities. A day before in the soundcheck I will try to find out what’ll work best to get in touch with the CellF and then decide which way to go & play, he told us. When challenging him about what he was expecting from the performance and interaction with the machine he wasn’t sure how the performance would develop: It’s fairly hard to say because I don’t know yet how it’ll react. But in the best case it will be something like a free improvised concert with all players in synch…like said before, I think the communicative aspect of the project is most important, and once you can feel the connection, it’ll also create interesting music. 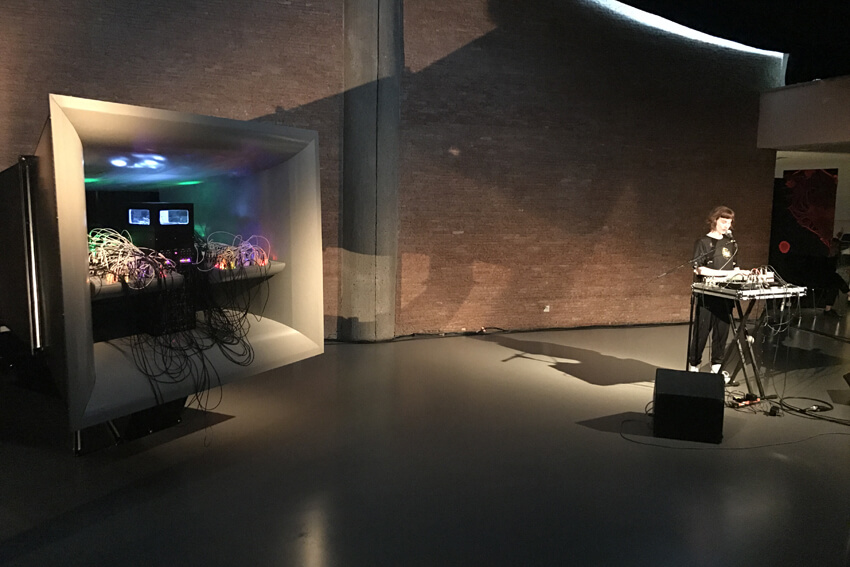 Schneider ™ was utterly taken after the performance. He told us that he felt he was playing again a living entity, something that was reacting to his music and with whom was establishing a real Interplay. You can hear more of his thoughts on our podcast that accompanies this article.

On the other hand, Evelina Domnitch and Dmitry Gelfand’s base their practice in artistic phenomenology. The art of observing phenomena where science is not just a sterile vessel for explanation but also a catalyst for a more profound understanding of the phenomena around us. The piece they presented in Technosphärenklänge#3, Force Field, is a performance developed in collaboration with Paul Prudence. It is hard to put into words the aesthetic appeal and elegance of this piece where acoustically levitated water droplets bounce and fuse like graceful otherworldly dancers while the vibrations of the drops are amplified making audible the slippery materiality of water shapes. We all left the HWK auditorium moved  after the show.  To then be taken into Robert Henke’s laser beam Tsunami. Henke was presenting his spectacular Lumiere III, which combines multichannel sound with highly energetic laser projections to create an immersive environment that puts human perception and multimodal sensory processing to the test. The show is a magnificent demonstration of creativity and precision, evidencing a not suspected materiality of the laser light.

The organisers highlighted that all three projects require intensive research and constant collaboration between the artists, natural scientists and technologists. And also are examples of the tight bond between natural phenomena with the human ability to create abstraction and construction, exemplify the continuous interaction between nature, technology and human consciousness, which determine the increasingly complex constellations of our reality. Such hybrid artistic test arrangements are in resonance with the “materialistic turn” in theoretical discourse, that shows renewed alertness to the material aspects of reality.

It’s particularly relevant that institutions like HKW and CTM reflect and generate debate on such topics and disciplines that are moving from emerging or liminal and becoming more and more established in the last 5 years. These works that take on phenomenology, disembodiment and the implications of its interactions, make current notions of materiality tangible and fundamentally rethink the relationship between nature, technology and human consciousness.