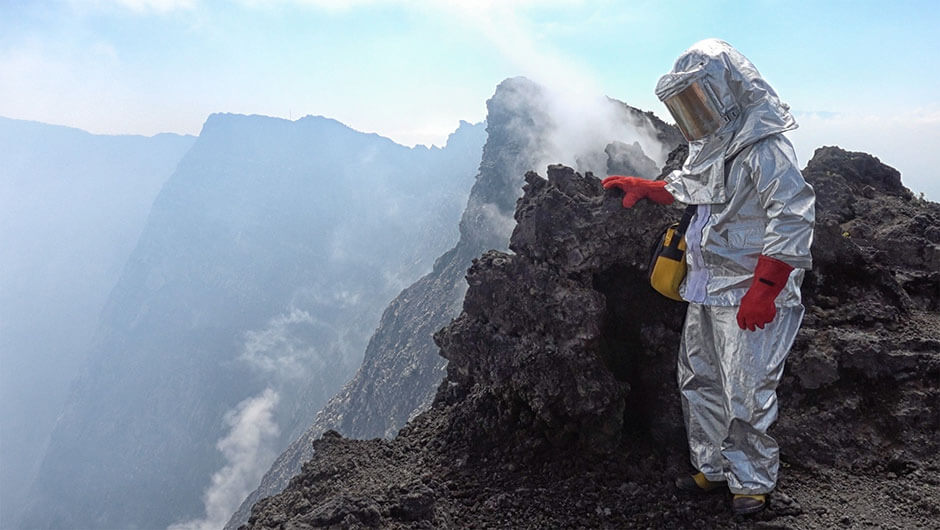 A soundscape is a collaboration between biotic and abiotic elements in a landscape: wind slicing through tree branches, river water churning through a floodgate, voices bouncing off canyon walls. Soundscape ecology is the study of the “sounded” knowledge that is embedded in the acoustics of habitats and the rhythms of ecological cycles. Soundscape ecology also encompasses markers of human activity, such as the drone of heavy traffic or racket of construction sites, and captures human voices to vividly tell the stories of spaces inhabited by people. This emerging field combines social, biological, and environmental sciences to detect temporal and spatial rhythms and scales, leading to critical findings like using bioacoustics to discern interspecies relationships and tally census organisms and diagnosing an ecosystem’s health by measuring changes in soundscapes.

Field recordings, captured with microphones and recorders similar to those used by musicians and journalists, are one of the primary methods used in soundscape ecology research. With value beyond simply archiving biological signals and atmospheric sounds, they can also be manipulated to detect patterns at frequencies otherwise imperceptible to humans, visualize complex rhythms, and map changes in a landscape over time.

Sound artist Stuart Hyatt uses field recordings to infuse his music with geographic specificity and historical depth. Hyatt’s memorable first field recording – taken from the depths of a Scientology recruitment office – is telling of his lifelong enthusiasm for sonic adventuring. Gleaning methodology from soundscape ecology, journalism and architecture, Hyatt’s music collages together vocals, swelling instrumentals and echoing soundscapes to amplify the quiet yet powerful histories of Indianapolis, his home in the Midwestern United States.

Metaphonics: The Complete Field Works Recordings is a box set of seven LPs that Hyatt released in September 2018 and features collaborations with over a dozen musicians and writers. Albums are grouped into the categories of  Geophony, Biophony, Anthropophony, and Cosmophony – terms coined by soundscape ecologist pioneer Bernie Krause, who also wrote the introduction to an accompanying book included with Metaphonics.

Stuart Hyatt mines geographically distinct sounds and the resulting work is part poetry, part ecological survey. Calling attention to the connection between landscape and soundscape diversity, his methodology encourages listeners to deepen their own connections with the natural world through creative exploration. 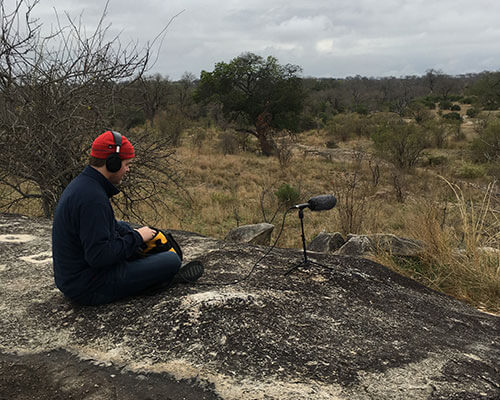 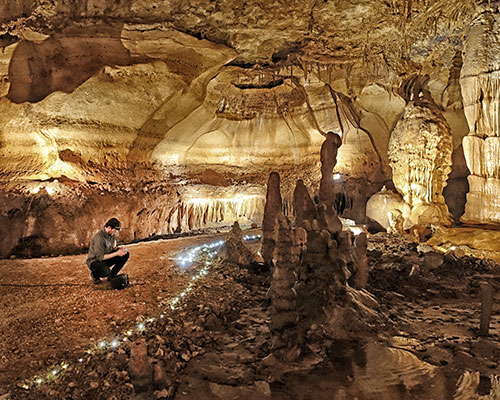 You are an artist and musician, but also have a background in architecture; with an interest in field recordings and an aim to consider and celebrate overlooked places, people, and ecosystems. How and when did the interest in these different disciplines come about?

It’s been a slow burn. I suppose my interest goes back to my childhood: my friend Kevin Fischer was hacking his parents’ tape decks and turntables into mini-recording studios. He’d invite me over and we’d just make weird sounds. He was kind of a genius. This was in 5th grade. In high school, I borrowed my friend Brian’s 4-track cassette recorder and was mesmerized. The layering of sounds on top of each other was something I had never really understood. At university, where I was studying painting and sculpture, I wanted to give voice to the objects I was building, so I bought a used Tascam 8-track recorder and really started to experiment. I also got a Marantz portable tape machine and began my first real field recording expeditions.

This was in Florida, near the incredibly strange world headquarters of the Church of Scientology. There’s this huge building – I think it is actually called the “Super Power Building” if you can believe it – I went there and signed up for an auditing session. I had my tape recorder in my backpack. The next hour was so bizarre: I watched a little video about L. Ron Hubbard, then I sat with an auditor for several questions and conversation (my tape recorder running the whole time) – I had to go to the restroom to flip the cassette – when I got back to my dormitory, listening back to the experience through headphones – I was exhilarated. I took that recording and layered it with audio from a Scientology VHS tape, adding some guitar and synth sounds. I think this was my first real audio collage piece. I ended up making about 20 different compositions in this manner for my undergraduate thesis project. It just kills me that I don’t have any of these recordings any more. I guess I’ve just sort of kept going – studying sculpture and architecture – but always with a keen interest in the sonic qualities of time and space. Each project is so different, but the methodology of collecting sounds, making sense of them, and composing narrative music and environments from them is still the foundation of my work.

Was was the intellectual process behind the development of Metaphonics? Why did you decide to embark on such a vast project and also what were the challenges you faced?

Oddly, this project arose from my thesis work in Architecture School. Here is how I describe the beginnings of Field Works in the book, Metaphonics: In developing a design thesis project for my M.ARCH degree, I knew I wanted to work locally and chose Washington Street in Indianapolis as a building location. But once I began an attempt at proper site analysis, which for me included recording and coding conversations with the people that live and work along Washington Street, I just sort of kept going. And walking. And recording. And then I realized that I couldn’t possibly understand the needs of a site without understanding the needs of its people. So I kept talking and interviewing. And then I thought about the other sounds: animal sounds, industrial sounds, transportation sounds, which led me to study noise pollution and design methods for all of the senses. Ultimately, I realized that I wasn’t preparing to design a building at all, but rather just trying to understand a place as I travelled through it. Luckily, I had sympathetic academic advisors and they granted me a degree for this work. Five years later and seven albums in, I still haven’t designed a building.

Each of the 7 records of Metaphonics is a dedicated work of curation (both music and artwork). What’s it’s the conceptual framework that brings all of it together?

Could you tell us a bit of the technical particularities of your recordings for each of the records? Have you used different equipment/techniques for each album? or on the contrary, you have a similar process applied to different environments?

In the book, I write a section titled “Notes for the Field Recordist” in which I describe in detail the audio equipment and recording techniques I use. I also write a bit about the ethics of recording people’s voices; I try to never record someone without their consent. I liken my style to a street photographer, where portability and ease of use are paramount. Professional recordists and engineers might laugh at the amateur gear in my bag, but that’s what I could afford to buy and understand how to use. I also want to encourage others to work in this field without having to spend a lot of money on gear. Putting a sock on your smartphone and laying it next to a bird’s nest can yield some pretty incredible recordings!

For Metaphonics you have collaborated with a large number of renowned musicians, artists and writers. Is there a story or one of these collaborations that you remember especially?

Erik Anderson collaborated with me on Born in the Ear. He is a writer based in Lancaster, PA. I was commissioned by the City of Lancaster to create a sound map and music inspired by this unique region of southeastern Pennsylvania. Already deep into the project, exploring and recording, I had so much material but was lacking a narrative framework for an album. When I get stuck like this, I’ve learned to just bring someone in to push me in a new direction. I started reading work by regional authors and found this fantastic little book written by Erik: The Poetics of Trespass. What a title! The book documents his meandering thoughts while walking the streets of Denver. It pays homage to – and explicitly references – the mysterious street walking scenes in Paul Auster’s New York Trilogy, (a book that had a massive influence on my early thinking about cities). Erik’s way of travelling through space via text seemed perfectly aligned with what I was trying to do with sound. I immediately found him and commissioned what would eventually become the essay “Born in the Ear”. It gave me the structural foundation (and the title) for the album itself. The entire essay is printed in both the album’s liner notes and in the Metaphonics book. It is really great, and a perfect example of how thoughtful collaboration can completely reinvent a project.

What is your main finding or reflection after compiling this amount of work on field recordings?

That nature can’t be improved upon. It is perfect. The jaw-dropping complexity of our environmental soundscapes is something I am only beginning to grasp. As humans – and we are undeniably a part of this sonic web now – our contributions are powerful and should be examined critically. I try to remain value-neutral when making audio field recordings, but when I think about our ability to make sound, and ultimately music, it is hard to reconcile the tones of Miles Davis’s trumpet, or Yo Yo Ma’s cello, or Nina Simone’s voice, with the vocal stylings of leaf blowers, car alarms, and factory turbines. We are just so weird.

There seems to be an increase in the presence of field recordings in recent contemporary productions. Considering the relevant environmental and pollution  issues (including at an acoustic level) of the current times, why do you think field recordings can be relevant for the listener?

I didn’t know much about field recording when I started out, and for a long time, I had trouble classifying and understanding the things I was hearing. I finally found a way to order these sounds when I discovered Bernie Krause’s The Great Animal Orchestra. He is sort of the godfather in this field and it is my sincere honour to have him write the foreword to Metaphonics: The Field Works Listener’s Guide. He understands the fragility of our natural soundscapes and has called his readers (myself included) to action. I suppose this music is an attempt to give listeners a more nuanced sense of place.

There is also an incredible new essay in Metaphonics written by Yiorgis Sakellariou titled FIELD RECORDING COMPOSITION AS HIEROPHANY. Sakellariou writes that “nature is an active and imaginative force and music is a tool to establish and preserve a deep relationship with it, both gentle and disturbing.” He continues: “field recording becomes an alchemical practice, a transformation of perception of both recordist and environment. A recording location is not simply a geographically framed scenery, but more importantly, a place of inquiry, experimentation, and wonder.”

There are so many enemies! From the mundane: emails, errands, housekeeping, kids’ schedules, automobile maintenance – to the truly painful: my own self-doubt, lack of focus, obsessive distraction, and fragile ego. If I had to choose one true chief enemy though it would be the lack of time I give myself in the studio to just experiment. I am so task-oriented that the opportunity for radical invention seems almost impossible to find. Sigh.

My wife Ann-Marie and our two wonderful children, Oscar and Beatrice. And my laptop. And coffee.