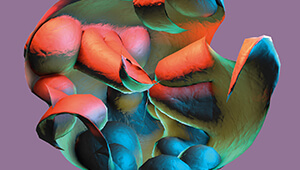 Robert Lippok the influential avant-garde German musician, visual artist and composer is back with a new album, Applied Autonomy, after a 7 years hiatus.  Out next May in Raster (one half of the recent split raster-noton) Applied Autonomy will be Lippok’s 3rd solo album.

The new album’s name reflects what the producer has been exploring for the last 2 years, both on a conceptual and technical level. Structures and layers that repeat and lead to others balancing and building up in an articulated “self-autonomy”. Based on material derived from sketches made explicitly for a club performance it also includes a collaboration with Klara Lewis. The 2 artists spent 2 days at the EMS studios in Stockholm, further approaching the idea of autonomy. During the session, both musicians played and performed simultaneously but not explicitly together, only subconsciously taking in what the other one was bringing about.

The artwork comes from the hand of Lucas Gutierrez, an Argentinean digital artist and industrial designer based in Berlin. His works, which he has presented in Sonar+D, MUTEK and CTM, and take on A/V manipulation in real time which resonates quite soundly with the album’s concept.

Ahead of the album’s publication, on 30th April 2018 Lippok will present Applied Autonomy for the first time live at »raster. index«, a showcase of the record label and artistic platform Raster at Berlin’s Funkhaus. Taking over 3 of its rooms (4D MONOM included), »raster. index« will also premiere new live sets by Byetone, Frank Bretschneider, Atom™ and Dasha Rush.