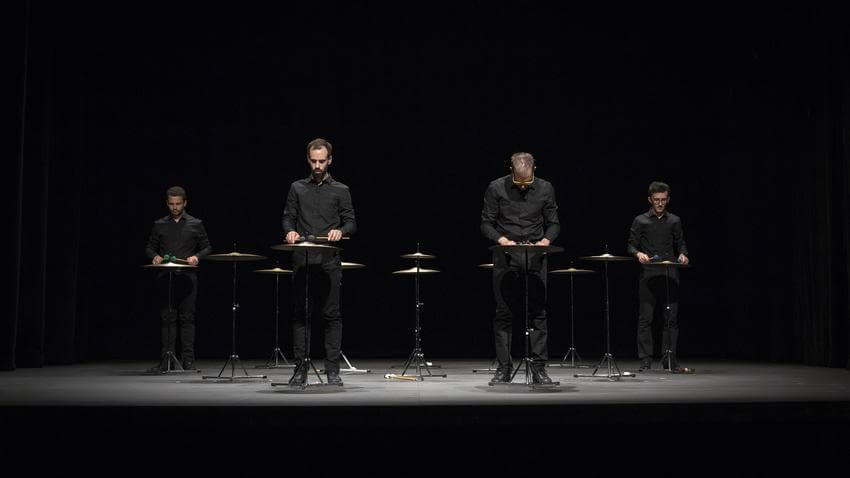 Ryoji Ikeda was back at the Barbican for a dual show. Both parts contrasting but complimentary of the work of the groundbreaking Japanese audiovisual composer. Ikeda has been exploring the intricacies of our digital age from the core of both data and coding, in electronic audiovisual artworks that have been blurring conceptions of art and digital sciences.

Ikeda was presenting a new version of his 2008 datamatics,  datamatics [ver 2.0]. A post-postmodern, post-minimalist reinterpreting the mirage of data that surrounds us. And 10 years forward, nowadays it seems more relevant than ever. Variations of his fascinating view on DNA sequences and gene mapping, cosmology and physics. The elements are essential minimal but they for complex patterns in 2d that transmutate into dramatic rotating 3D structures. The new final scenes the imagery is based on a four-dimensional processing. The sonification of the data brings another tangible level of the experience, with the vibrations of bass notes and a timbral spectrum of clicks and bleeps. A constant flow of information relentlessly advancing and mutating to an oppressive but at the same time digitally tantric experience.

Datamatics [ver2.0] was preceded by music for percussion,  a collaboration between Ikeda and the Swiss collective Eklekto and premiered in 2016.  It finds Ikeda moving away from the complexities of electronic and new media, to an exploration of a more raw sound. In Body Music is a rhythmic pattern is created by two seated performers clapping and using their heels. In Metal Music III four percussionists produce droney sounds using cymbal’s surfaces. For the ones who are used to his usual electronics compositions that were quite a contraposing show but sides complementing each other and with a common narrative, bringing the qualities of the artist in using all kind of techniques, again as he said in 2006: “post-postmodern, post-minimalism, after everything“.

(All pictures courtesy of the Barbican)