ÓSCAR MARTÍN, sounds born out of algorithms and microorganisms 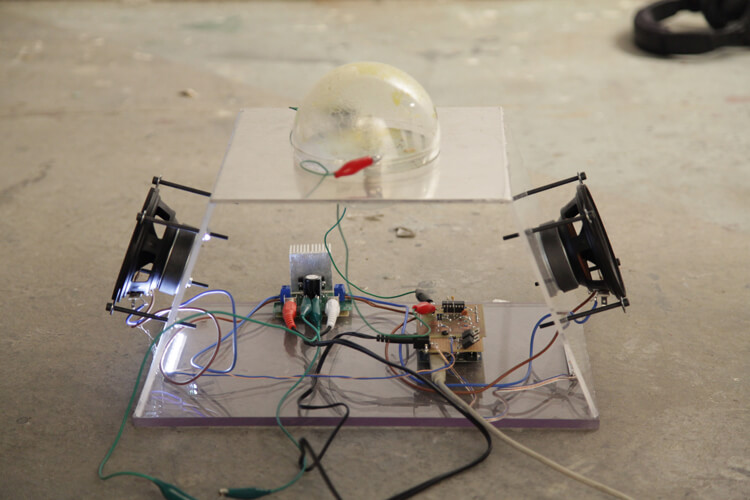 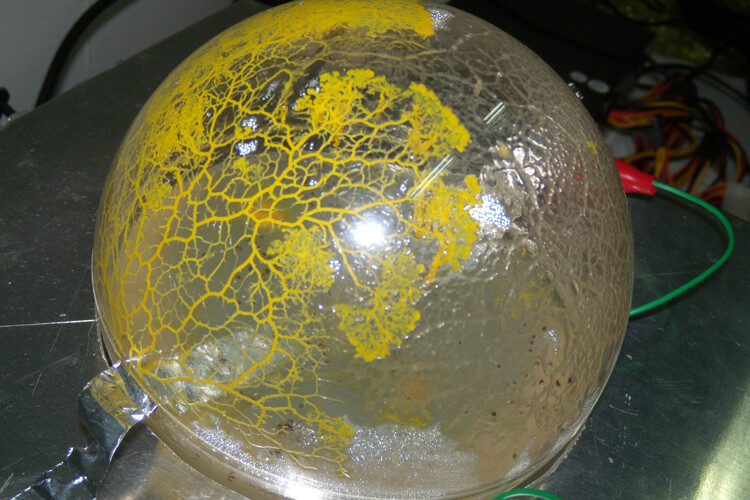 Óscar Martín is a sound artist and programmer working in the field of generative art.  Typically, generative works are systems that, when set in motion, self-assemble sounds s using algorithmic methods. Martín develops his own tools to create real-time sounds in response to being placed in complex systems. His highly technical work approaches concepts of emergence and self-organisation and explores the functionality of spontaneous appearance of order in initially chaotic systems. Martín is involved in additional projects, such as the platform MetaminaNFR -a continuous radio stream played in a server- and the experimental audio-visual research collective Minipimer.tv, and he is editor of UrsonateFanzine, a publication exploring noise art and experimental music. He publishes his sound and code compositions in different labels and he teaches experimental workshops on generative systems and computer music.

After earning a Bachelor degree in Fine Arts, with a specialisation in Sculpture and New Media, Martín taught himself  computer science. Being an autodidact, he created software and -almost inadvertently as he tells us- started making generative music. Soon after, he became interested in biological systems and began to tackle simulating the complexity of living organisms. A result of playing with arbitrariness and creativity is the sound-light installation RdES, which integrates the behaviour of different modules that interact with each other and with the environment following biological, computer science and artificial intelligence models, in a way that light and sound are generated out of the emergent processes.

Moving to a more biological framework, the still work in progress bionic sound machina | no human composer or BSMBSM_NHC_v0.1 uses a colony of the slime mould Physarum polycephalum to create an artificial pseudo-intelligent symbiosis. In response to light and stimuli, the microorganism determines the evolution of the genetic algorithms that, in turn, are applied to generate the external stimuli. An exchange of information that unfolds the idea of “intelligent organisms” and the possibility to mutually evolve.

Through light and sound installations and performances Martín addresses the phenomenon of self-organisation, present in models of evolution and complex systems, echoing the ancient Greek idea that cosmos emerged from chaos. 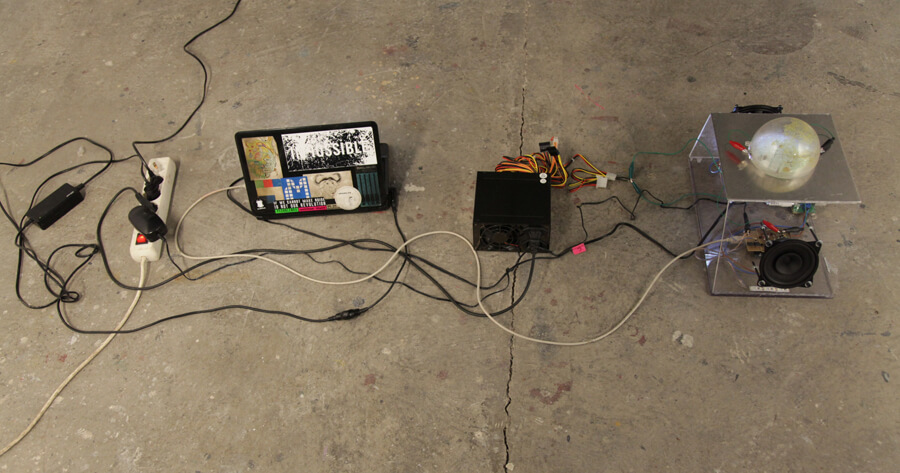 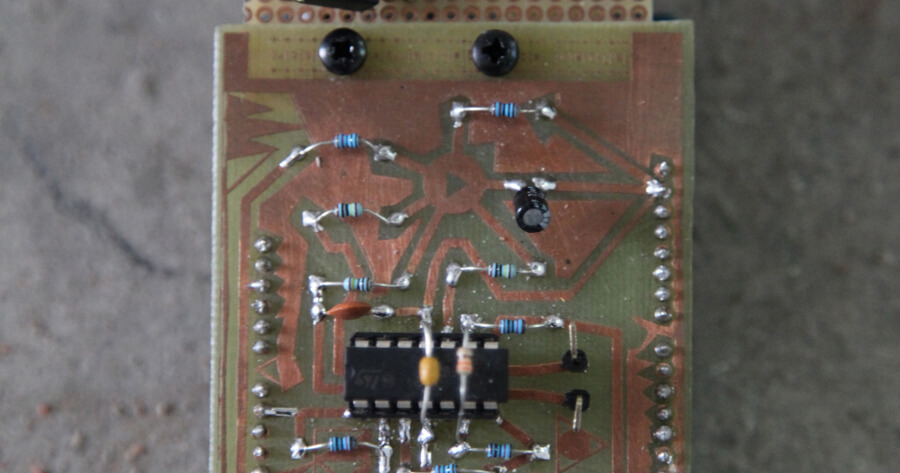 You are a media and sound artist, when and how did the fascination with biological systems come about?

Since I was very young I was attracted to nature and its phenomena. Specifically, I was fascinated by the movement and group synchrony of the flocks of birds, some insects and fishes -I could spend hours observing them. I have always been a restless person and attracted by different areas of knowledge. Curiously, if we let ourselves be carried away and flee from the need to specialise, those “different” areas of knowledge cross and melt in unexpected ways.

When I finished studying at fine arts in university, I began to study computer science and systemics in a self-taught way and developed homemade software to compose generative experimental music. Without realising it, I arrived in the world of biological systems and their wonderful complexity.

Recently, in the few last years, I have become very interested in complex systems, self-organisation, emergency and its implementation in the artistic experience. At the same time recognising that nature is the most complex system that we have. I worked with algorithms that simulate natural complex phenomena like, for examples BOIDS, an artificial life program, developed by Craig Reynolds in 1986 that simulates the flocking behaviour of birds. I used this to make a generative sound composition.

After working with code I started to work with electronics and physical sensors like in the installation {RDES} to arrive in a logic sequence to work with biological material.

Why Physarum polycephalum instead of another microorganism?

I got into Physarum polycephalum, a kind of slime mould, through the book “Emergence: The Connected Lives of Ants, Brains, Cities, and Software” by Steven Berlin Johnson. It was an interesting and instructive book that introduced me to this exciting world of emerging systems. In the book, they talked about the first algorithm that simulated the growth of a colony of slime mould and reproduced the emergent and self-organisation behaviour of these organisms. Some slime mould may disappear from sight , when they separate into their “individual cells” or form a larger organism and more complex. and become visible when they come together in certain conditions, such as food shortages.

The Physarum polycephalum or slime mould is a clear example of emergent and self-organise organism and it possesses a series of very interesting behaviours given its ability for collective intelligence and cooperation. The Physarum polycephalum forms a yellow network that is distributed throughout the space finding the most optimised routes between nutrients. Another property that caught my attention is its capacity for memory. They respond coherently and intelligently to environmental stimuli.

I chose it for these reasons: its capacity of collective intelligence and because it is visible to the naked eye and easy to cultivate in non-specific laboratory conditions, such as my workshop or in an artistic space. And I love the way in which it extends through space forming fractal structures and that its growth is perceptible on an interesting time scale,  in hours/days and you can observe the changes.

The ability for collective intelligence and cooperation of the slime mould for me this has also a political and social implications and could be connect with classical anarchist theories like  “Mutual Aid:A Factor of Evolution” by Peter Kropotkin and also with the ideas of symbiogenesis by the feminist biologist Lynn Margulis.  In both cases, they talk about the importance of cooperation in the evolution of the life against the post-Darwinian theories that has been imposed a vision very capitalistic of the evolution of life, competition and survival of the strongest.

For your latest project, still work in progress, bionic sound machina | no human composer, which looks like a fascinating combination of non-human and genetic algorithms to produce sounds (which brought me to the work Guy Ben Ary, and his semi-living, disembodied neural synthesizer), what are the biggest challenges you face in its development?

The biggest challenge of BSM / NHC for me, is to get all parts of the installation; software, hardware, slime mould and the human factor, enter into a symbiotic interaction and evolution in a horizontal context and acquire creative power. BSM/NHC tries to make us perceive, through its outputs – patterns of light and sound, the processes of joint evolution and interaction. And  visualise the intelligence, sensitivity and complexity of these kinds of symbiotic systems. It also tries to explore creative spaces that escape from human hierarchical control that generate unpredictable sound and light compositions from human reason and creativity point of view. In this line explores new musical codes that open us to new perceptions, sensations and thoughts that help us move outside our anthropocentric cosmovision.

At the technical and knowledge level the installation itself is a challenge for me, it goes through different areas ranging from electronics, sound art, artificial intelligence, systematics and biology among others. I’m in a process of learning about all this. BSM / NHC v.0.1 is a first prototype, and the idea is to continue developing it in all its layers until the whole is more than the sum of the parts. There’s a lot of work ahead, from the development of electronic device that read the electronic responses of the slime mould to the code of the software and how it translates all this information into sound and light. Moreover, a better understanding of the life cycles of the Physarum polycephalum and how it reacts to sound and light stimuli will inform the memory and decision-making that is making the installation itself.

I am currently in the process of theoretical/practical research on microorganisms, algae, fungi and plants. Trying to learn from them and developing my skills to grow and cultivate them. This is forcing me to place myself in a non-anthropocentric perspective and practice. An area of focus in this research is on the collective intelligence of biological systems at different scales, ranging from the micro to the macro. I am also interested by the the different ways these biological systems communicate between themselves and with others, including humans.

I am still not clear where this research is going to take me, and how I’ll move it to the field of artistic experience. Some ideas that are emerging could materialise in some type of interspecies communication device (microorganism-human) based on biophysical electrical  response and sound and light pattern waves.

I think that the immobility and comfort deplete our daily creativity,  at least I feel it in my experience. Other enemies would be the prejudices and mental constructions that we create ourselves. While they help us understand reality and live within it t, at the same time, creates blind spots and spaces of doubt that shade our perception.

Without non-productive spaces and times. I love to have days totally free of any commitments or schedule, time for the unexpected.