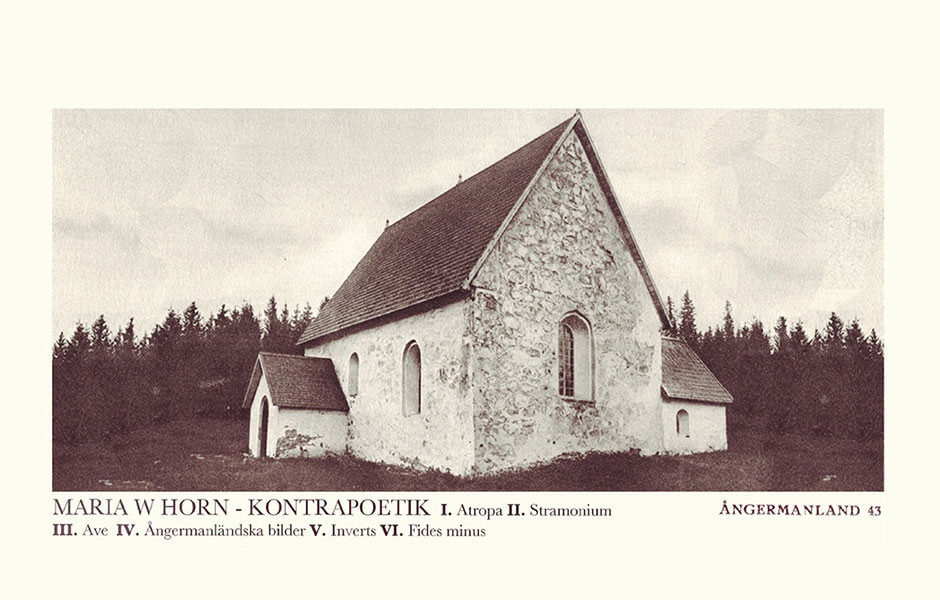 For the most part, time and space have been conceptualized in terms of their mathematical properties, like dimensions. The two are also the foundation of describing human perception and properties of stimuli. Even in the art world, both were mostly taken for granted – manipulated with, yes, but not questioned. Their foundations seem to shatter only in most radical pieces – as is the case with musical compositions of Maria w Horn.

Maria w Horn is a composer based in Stockholm, who is interested in the manipulation of space and time. Working with sonic extremes, from minimalist formations through to harsh electronics, she is waltzing between the digital and the analogue and also utilizing visual elements. The results are audiovisual pieces which challenge our notions of perceptions with confusing our mental processes. Her work is something, that does not just pass us by, but what muddles our everyday life and with that tries to evoke alternate mental states. Apart from her solo work, she is also a part of Sthlm Drone Society – an association working to promote slow and gradually evolving timber music – and cooperates with the label XKatedral.

Last October  Horn released her sophomore album Kontrapoetik. She drew from her personal experience of growing up in rural region Ångermanland in the North of Sweden. Today, the region is in the free fall with depopulation and economy problems. Still, it remains (in)famous for its several historical occurrences, from workers movement that nearly triggered a revolution in 1930 to burnings and decapitations of women accused of witchcraft in 1674. The material she works with is historical, but the manner of working it is truly artistic. She potents it, transgresses it, counters it. The album is also a result of Horn’s association with a satanic feminist sect, which employs the same activities as Christian tradition – rituals, ceremonies etc. – but subverts it. Thus, the idea is to offer a counter reading and with it to dismantle its misogynistic traditions. Therefore, Lucifer becomes a feminist liberator of womankind, who is struggling against God, the ruler of patriarchy and Eve’s forbidden apple becomes heroic act par excellence.

The album pieces were conceptualized especially for such ceremonial practices. Melody structures were inspired by both historical – ancient Swedish pastoral music – and contemporary elements. Although the method is in merging and reinterpreting the many – there is also some sampling in the fusion – the aim is still to condense, to minimize. The structural elements are more or less simple melodies, which gradually grow in complexion with various techniques, from inversion and repetition to deformation by distortions. Through the manipulations, the abstract melodies acquire a certain physicality, almost to the point of tactile quality.

* Kontrapoetik was released on October 19th, as a co-release of already mentioned XKatedral and Berlin-based Portal Editions.

You are a composer interested in the manipulation of time and space through sonic extremes utilizing both digital and analogue synthesis as well as acoustic instruments and audiovisual components. How and when these interest come about?

When I moved to Stockholm around ten years ago to study electroacoustic composition I met some people interested in generative music and digital synthesis. These people became close friends and are until this day my biggest source of musical inspiration. We formed a group called Sthlm Drone Society and have among other things organized 12-hour drone events in industrial buildings around Stockholm, creating immersive sound environments suitable to present this type of slowly evolving, textural music.

My interest in human perception is due to our work with Sthlm Drone Society, however I wanted to continue working with these concepts outside the realm of drone music.

I am interested in combining contradictory modes of expression, finding points where controlled compositional methods such as minimalist and formalist approaches can be contrasted with chaotic elements such as feedback or chance operations. I started incorporating lights and stroboscopes as a way of exploring audiovisuality and the way overload/loss of perceptual stimuli can conspire to invoke alternate mental states.

In Kontrapoetik, your most recent album, wour work takes on from the spiritual and the technological/scientific, how do you understand both worlds and how you balance them creatively?

The compositional process was in this case paralleled with research on the history of my home area Ångermanland. Incorporating scientific and historical data into my artistic work is a new approach for me, and it came about due to a commission from the local museum requesting me to choose freely from their archival artefacts and compose music based on that material. I paralleled this with another project based on the concept of satanic feminism, where the practice was heavily inspired by counter readings – in that specific case the christian genesis narrative was turned upside down resulting in Satan being reconceptualized as a liberator of womankind. This project influenced my research on Ångermanland and led me to focus on counter-narratives and erased perspectives of the area. Kontrapoetik turned into a kind of exorcism, a way of exposing the traumas of the past in order to move on.

Several of the pieces on Kontrapoetik were composed specifically for ceremonial practices; music or songs are very central to ritualistic practices. What it is in your opinion that sound adds to the ritualistic process? and how your music translates from this idea, for example in the new album particular case, was it through the instruments and sound resources used?

It’s interesting how certain sounds can work as symbols for our consciousness to enter different states. This conditioning varies depending on our socio-cultural environment, but since the sect used Christian dichotomies as a starting point, it felt natural to incorporate musical symbolism such as church organs. In the case of Ave, the starting point for the compositional work was a text written by Djuna Michelle Jangmyr. As it is an invocation to our fellowship with Satan, I was trying to musically create an atmosphere for her words to materialize, to amplify our will as a sect to mold a gateway.

Alternating Currents, another of your projects, is an intermedial electricity concert choreographed and performed alongside Stina Nyberg and a frequency-controllable Tesla coil. What was the intellectual process behind its inception?

Alternating currents is the result of a long-term obsession with the inventor Nikola Tesla and the early 1900’s phenomena of touring electricity shows. Stina was the initiator of this project, and after travelling in Teslas footsteps to learn about his life and inventions while meeting coilers and tesla-fans around the globe she contacted me to know if I wanted to compose music and collaborate with her on the show Thunderstuck. Since this was a rewarding and fun experience, we decided to continue our collaboration forming the duo Alternating Currents. Tesla coil performances are often performed in hyper-masculinized, technique-masturbatory and rock’n’roll-fetishistic shows, and we are trying to add some nuance to that tradition.

Your practice also encompasses a profound performative aspect, could you tell us what has been a challenging project in that sense?

For me the most challenging aspect of performing is to find a good balance between pre-composed and live generated material. I had a period of performing completely improvised sets, but realized that I like music where you can hear that the compositional decisions are thought through. That said, after just a few show you get kind of tired of performing material if its not modulatable in the moment. That is where I find the biggest challenge in terms of the actual performances, to find that perfect balance.

Composing music is a solitary work on most occasions. But I guess you are referring to non-work solitude? I am kind of an introverted person, I very much enjoy my alone time.

Usually, I spend it reading books, hanging out in the sauna or going for a walk.

(Pictures and video courtesy of the artist)