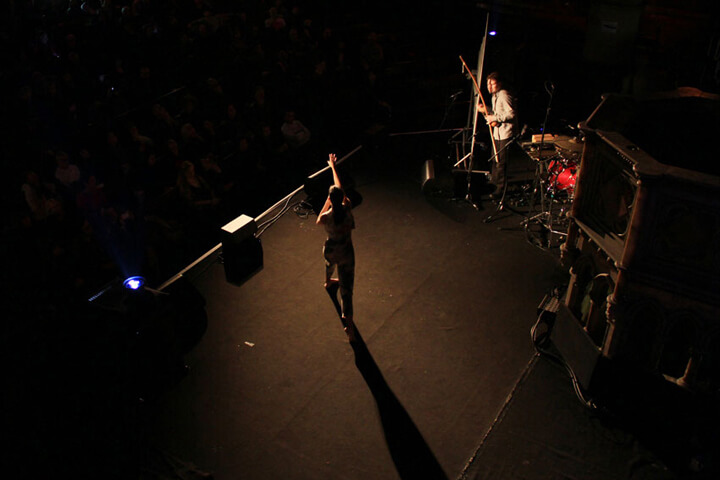 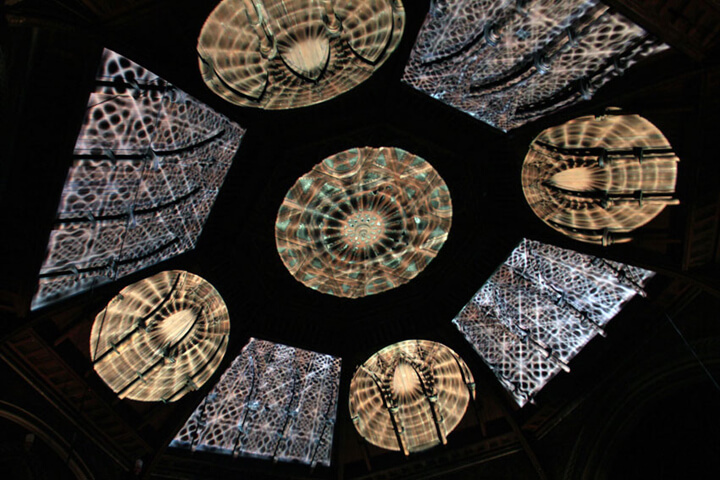 Fractal art is a scientific and algorithmic form of art which lies in complex mathematical and physics concepts. It is composed of geometric patterns which are translated into images, animations and computing. Harmony and colorful imaginary emerge from physic principles of chaos and order.

KIMA, created by Analema Group*, is an interactive piece of art in which geometric patterns, mapping, scientific research and music are merged to help us interact with sound. KIMA holds the idea of a full sensorial and spatial experience to drive the public through a journey in which light, performance, music and color make sound waves visual.

Although we talked to Artistic Director and founder of Analema Group Evgenia Emets, Analema group is a London-Based Arts Collective composed of artists, researchers, programmers and sound designers that acts as a single voice on the principles of sociocracy and synergy.

KIMA is an interactive art piece focused on investigating visual properties of sound, how did you come up with the idea behind KIMA?

KIMA is a collaborative journey in the sense of various people contributing to it with elements, which make it what it is now and taking initial idea of making sound waves visual to a completely new level of implementation. I have always been interested in making visible what is hidden, so making music appear before our eyes fascinated me as a possibility. For thousands of years geometry has been a magnificent tool for understanding of the Universe. Third aspect driving KIMA development is space: how spatial arrangement of sound and light can shift our perceptions. If you look at the science, the nature of sound waves has all these aspects working together: music is geometric in its harmonic motion, it is a full spatial experience and it is totally invisible.

There have been numerous attempts to visualise music artistically and scientifically. Both science and arts have been deepening our understanding of how sound, light, music, color and form are interconnected. Analema group is working in the tradition of visual music continuing the work of Skriabin, Kandinsky, and Fischinger along with scientific research of Ernst Chladni and Hans Jenny. We are connected to some outstanding research in mathematics on the nature of vibration in space, which will inform KIMA at next stages.

We were interested in creating an immersive space for exploring music visually and also a tool for intuitive collaborative music improvisation and composition. Both audience and performers are in the center of our development, we are committed to offering them opportunity to engage with the music through real time emerging patterns. The stage we are currently in only allows visual pattern to respond to music. Our next steps will allow to drive music’s creation making music much more accessible to the non-professionals.

Analema Group —the interdisciplinary arts collective behind KIMA— consists of artists, researchers, programmers and sound designers working at the intersection of art and technology. Empathy or apathy, how do you work together?

I created Analema Group in 2010 when I realised I want to develop a collaborative aspect to my artistic practice, working with a team of highly specialized and skilled people. In 2011 we launched KIMA development with Oliver Gingrich and Alain Renaud, who are currently the core team of Analema Group. For our latest performance in Union Chapel we were incredibly lucky to meet Marcel Schwittlick, our very talented visual developer from Berlin and Jackson Tayler, Video mapping artist.

This winter working on KIMA for Union Chapel we spend a lot of time together. Brainstorming and trying out new ideas, rehearsing and troubleshooting, cooking and eating together. We became one organism: learning to listen and understand each other, Analema Group is very much a community. I think the idea of an art collective working as one organism is relatively new but emerging in art practice. The first thing we have to learn is emphatic communication, democratic decision making and a holistic approach to creating a shared vision. True collaboration is hard but when it happens everyone can really feel it!

KIMA is a visual and sound performance, if you would have to give up one of your five senses, which one would it be and why?

KIMA is moving towards multi-dimensionality of senses. It is quite a paradox because we know senses are deceiving us all the time, so when deprived of one of the senses we experience an almost cathartic revelation. At the same time we are constantly being stimulated by sensorium. One of the reasons for this is our perception of being separated from this world and living inside our body. I had experienced in the past of being in isolation tank: no light and no sound, the boundary between you and the world disappears. It is impossible to describe it as it happens on many different levels – time and space disappears and during some moments there is no “you”.

KIMA draws on completely the opposite, the sensory immersion, this is opposite to sensory deprivation.  With the use of sensory stimulation we can achieve similar effect of shifting perception of space and oneself but through different means. We have done some experimentation with the sense of physical and direct vibration during Incloodu Deaf Arts Festival with Robert Jack’s vibrating chair connected to our installation. Although audience found it interesting, we are light years away from making this a meaningful experience for everyone. It does work much better of course for deaf and those with partial hearing: while sense of hearing is lower there is more information processes through other senses, such as vision and vibration.

If I had to go without one of the senses I would probably let go of one of the usual sense, like hearing in exchange for being able to feel and see magnetic fields – it is called electroreception, which dolphins and some fish have. I have had fascination with magnetic fields, as invisible phenomena for many years and have been training myself to develop sensitivity towards it.

I used to spend a lot of time in solitude, an absolute necessity for me. Now I really have to plan time alone, it is becoming a luxury. Commitments like KIMA come along demanding a lot of time for research, meetings, and rehearsals with my team.

However I am planning to take KIMA into a more introspective direction, which will open space for reflection and meditation, therapy work using voice and instruments like Himalayan singing bowls, bells and percussion. I want to enable the audience to become the source of sounds and spend time exploring themselves. I am dedicating next few months to taking KIMA onto this journey with my own voice and my therapy work before opening it to others.  I am very much looking forward to this time when I can do a great deal of singing and meditation to explore how the visual side of KIMA can really help those who want to project their voices and their musical talents to support themselves.

Continuous learning!  I have been asked many times when do I stop learning and studying and just do one thing, but I feel like I am only starting. I have found something that sparks my passion and I am now integrating everything I have learned about sound, light, space and human perception. There is great deal of learning still to be done and this learning will need to be integrated into my art practice. I feel this flow cannot be stopped as this is part of something bigger happening in human evolution and I am playing my own role in this grand plan. I think we are both driving the process but also each of us is being driven by what is happening on a larger scale in the world.