EWA JUSTKA, enquiries into the materiality of sound and light 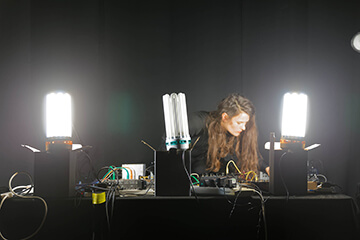 With one of the best live shows at the moment, Ewa Justka, a polish electronic and noise artist, is challenging audiences with her the unique approach to modular synthesis combined with light bulb systems. Her performances struck by their harsh and visceral physicality; sturdy sound and light waves travelling through the air and through one’s body. And in doing so, they excite and vibrate every atom in it, giving an unexpected visual and sonic embodiment and a true electronic experience.

The artist, who is also a self-taught instrument builder and electronics teacher based in London is currently studying an MA in Computational Arts program at Goldsmiths College. She sees electronic and computing systems as living systems. Organisms and even single cells, have a constant flow of electrically charged molecules. This interest brought her to work with plants in Biofeedback Plants a sound installation where sound is triggered through movement and touch. The plant, as well as an interacting person, conducts electricity which creates a dialogue between the two –evidence of the flow of electricity.

Her main current focus of research is in Optoelectronics. Optoelectronics is the study and application of electronic devices and systems that source, detect and control light. It’s a wider branch of physics that concerns all interactions between light and electric fields, whether or not they form part of an electronic device. Building her own synthesiser, the Optosynth (or optical synth), allows her to create sound controlled by light and touch. Also interested in DIY  electronics, she runs workshops “where participants learn basic building blocks of electronics instruments (circuits) and principles of electronic engineering in a fun, playful way”.

Despite her strong academic background, she also expresses a desire to get away from over-intellectualized and dull sound art scenes – expressing a concern some of us share -, and create something that can be intensely experienced. It seems her interests are shifting towards the dancefloor: “live performance is much more appreciated in this kind of environment rather than in galleries, or serious sound art events.”  The last time we saw her earlier this year her set was particularly heavily infused with acid sounds from drum machines and homemade synths culminating with her usual intense stroboscopic light and sound crescendo. We hope her research keeps taking us into such transfixing sonic experiences.

You are a researcher in sound art and noise exploring the materiality of objects and sound through ontological systems interactions.  How did the fascination about them come about?

Hmm. This is quite an old fragment from my bio, which I wrote written a few years ago doesn’t mean that this does not interest me anymore –  but the answer is quite broad. It has few levels, first: building stuff. I think that making stuff from scratch is quite crucial in my work, as I’m interested in the process of doing things as much as their output. I think that learning process is very important in my artwork. A similar thing happens in my performance, I think, the sound and sight become very physical, material experience (I mean, obviously the sound is a physical experience because a sound wave is a PHYSICAL movement of the air) but obviously, it’s very much intensified in my live performance. And how the fascination about this came about? There are few reasons. One of them is being bored of dull, conceptual sound art, I’ve seen and experienced so many times, one good example is my university, LCC, where I finished my BA in Sound art. Those tutors are living in the 60s still, but the boring, obvious 60s. I’m just frustrated with those over-intellectualised sound arty works, which do not do ANYTHING to me. They don’t grab my attention, do not say anything interesting. If you know what I mean. I want to experience something, ANYTHING. Again, I gonna repeat myself, but what’s really important for me is the learning process, so that’s where this fascination is from. I don’t think we learn enough about stuff in art/sound art practices, and I believe, that we can learn a lot about ourselves/the world when studying scientific(ish) subjects, like electronics. Right now I’m studying those crazy neon bulbs, which were used in electronic systems in 1915-1930, and this is super interesting, because, what’s cool about them is that they work as logic gates. Which basically means, that you could build a synthesiser completely based on neon bulbs! (one guy actually did it)  Running on 100 V. the sound created with 100V is fucking mental. I’m not sure where am I going with this on the side note, forbidden planet sound track was completely based on a synthesiser built from valves and neon bulbs. [1]

We’re particularly taken the harsh physicality of your shows (optoelectronics) at the sensorial level (both hearing and sight), that sensation of feeling all the atoms of your body vibrating. What are your aims behind them?

I think I kind a responded to that question, but to add a little bit more, I think there’s something special happening to us when we are exposed to quite intense and brutal sensory attack. I think, that deep down, we are very much primitive and animalistic. And, there’s no way out of it, really. So when we are in this multi-sensorial situation, something is being triggered. One example is a club situation. I think it has to do with this repetitive rhythm and it has its origins in tribal rituals. There’s this book called “Music and Trance: A Theory of the Relations Between Music and Possession” which is about the relationship between music and ritual trance. I think it’s a very interesting link. Quoting “music’s physiological and emotional effects are inseparable from patterns of collective representations and behaviour, and that music and trance are linked in as many ways as there are cultural structures. “ hmmm. Interesting. I could write a whole essay here, but I’m gonna refrain myself.

Biofeedback plants it’s a sound installation in which you explore the direct interactions between two organic materials humans and plants, using their conductivity properties.  What took you to work with living systems?

I see electronic/computing systems as living systems. I believe that any analogue signal flow is animated because due to it’s non-repetitive and temporal nature. I’ve been reading about the History of Cybernetics a bit, which is an obvious association. But except for Weiner’s, Maturana’s and Shannon’s (among others) groundbreaking work on cybernetics and their studies on relation between man and machine, or rather,  an investigation of what constructs living systems and where’s the boundary between organic and inorganic; and questioning what defines them and what separates them; there were many less known scientists which had really exceptional view on ‘living systems’. The ones I particularly find fascinating were Johann Wilhelm Ritter, Georges Lakhovsky and Ben F. Laposky. The reason I want to mention them is because of the way they understood and worked with living systems, which I find very particular.

Ritter was a strange, eccentric, self- taught scientist from early 19th century, whose main field of study was electrochemistry. He’s actually behind the first electrolytic capacitor! He used his own body as a material for experimentation while building homemade batteries and other inventions (digression – he also used them for electrocuting himself for.. uhm, pleasure ) in order to reveal polarities in forces of nature. How poetic and mad is that? Then, there was Georges Lakhovsky, Russian engineer and inventor from the turn of the century who was working with electromagnetic waves and its role in curing cancer. He constructed so called ‘Multiple Wave Oscillator’ in this purpose. He believed that each living cell oscillates, and by applying short electromagnetic waves the damaged cells can be cured, as according to him, living cells transmit and receive electromagnetic radiation. He also studied the relationship between earth’s electromagnetic field and birds flying patterns.

Ben Laposky on the other hand, is known for making first computer graphics by using oscilloscopic images, which as we know, are sound waves represented as voltages on the phosphorescent screen of cathode ray tube. Lakhovksy studied patterns which occur in natural forms due to physical forces, like Lissajous figures and pendulum curves.

So as we can see, those three examples seem completely different, we had an electrochemist, computer artist, an engineer. I think their approaches are very peculiar and demonstrate very imaginative take on living systems. I see living systems as forces, not necessarily forces of nature, as that the term ‘nature’ requires some unpacking here; as our traditional understanding of this term might be a bit outdated and I think it’s much more ambivalent than it seems. So to finally, answer your question, perhaps this ambivalence which I mentioned took me to work with living systems…

I think I want to focus more on making more music, deranged acid techno stuff. I really want to play in clubs –it sometimes feels that my live performance is much more appreciated in this kind of environment rather than in galleries, or serious sound art events. Also, I feel much more comfortable in this environment, there’s less pretentiousness there. I also want to build some weird synths (those neon bulb ones which I mentioned before). Also, on the other note, me and Manni (Manni Dee) are going to play together at Norberg Festival this summer, at Kraftwerk, which is gonna be mental! I’m so excited about it.

Toxic relationships, that’s the main thing really. I can deal with the rest.

There are few naughty things which I shouldn’t probably mention here, but apart for them, I would say books and solitude.

Exhibition: ‘NFTism: No Fear in Trying’ by Institut at Unit London & virtually via Arium 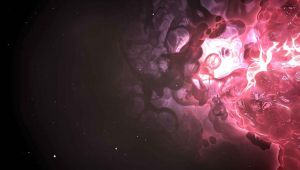