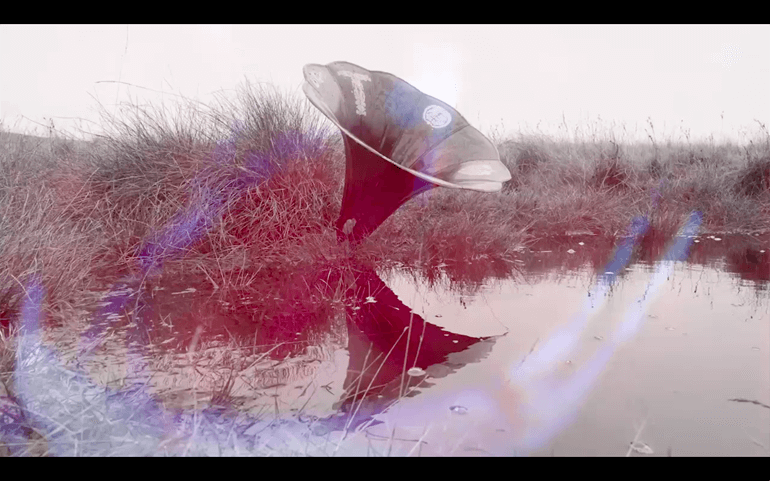 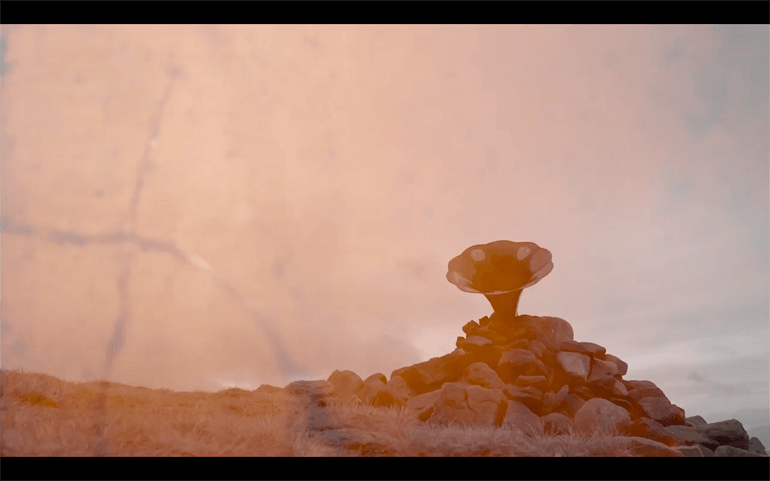 Human impact has caused mass extinctions of animal and plant species and altered the environment in such a way that, according to a paper published in Science (January 2016), we are in the midst of the so-called the sixth mass extinction. The Holocene epoch, which began around 12,000 years ago, is outdated. A debate between experts to call the period we live in argue that the Earth is pushed into a new geological epoch, the Anthropocene (from anthropo, for ‘man’ and cene, for ‘new’) or the age of the humans.

Plastics into the oceans, the use of fossil fuel, CO2 emissions and greenhouse effect that have risen the temperature of the planet more than two degrees and, farming and hunting are some of the interventions of the humans in natural systems that have made them the major geological non-natural force of change.

Rob St John is an artist and cultural geographer based in West Yorkshire (UK) whose artistic practises involve sound art, photography, film-making and landscape writing. St John experiments with stillness and emergence ‘by setting starting points for a piece of work, and then allowing (un)natural processes to take over, whether for a few minutes, or many months and years.’ His conceptual framework lies at the heart of the Anthropocene, in this sense, he is presenting at Switch House, Tate Modern in London, as part of Tate Exchange program his collaborative installation Emergent Landscapes(*). The installation blends sound, sculpture and lichen painting as a metaphor to describe the influence of humans as agents of change in the planet.

But, what is becoming different? St John has encompassed two elements in the installation, sound and sculpture, in the shape of a cairn. In the north-west corner of the room, the  cairn will be made of clay tiles, wooden cedar shingles, and red perspex tiles with the help of the museum visitors. In the north-east corner an old gramophone and wooden munitions box will act as field recordings device to register the voices of the visitors around Tate Modern.

Emergent Landscapes is a poetic and participatory installation that seeks provoke reflection about this (new) geological period human-drive in which we are entering. St John uses the construction of a cairn as a symbol of the new Anthropocene epoch; the different strata and marks of the cairn become (in his hands) the different strata of the Anthropocene. 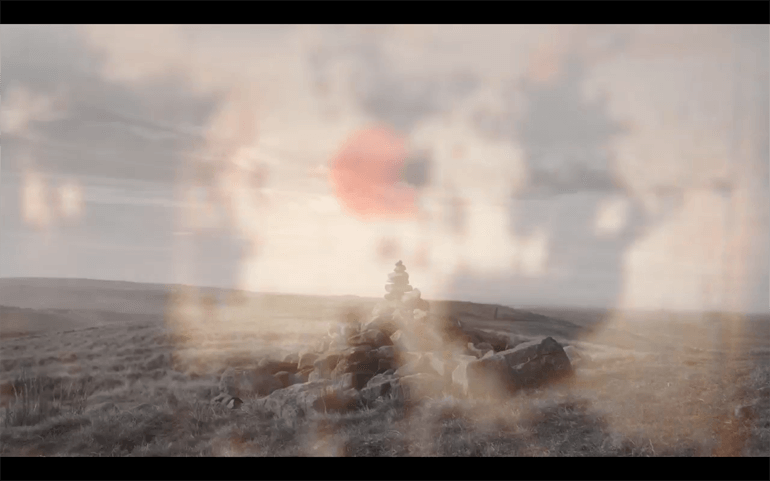 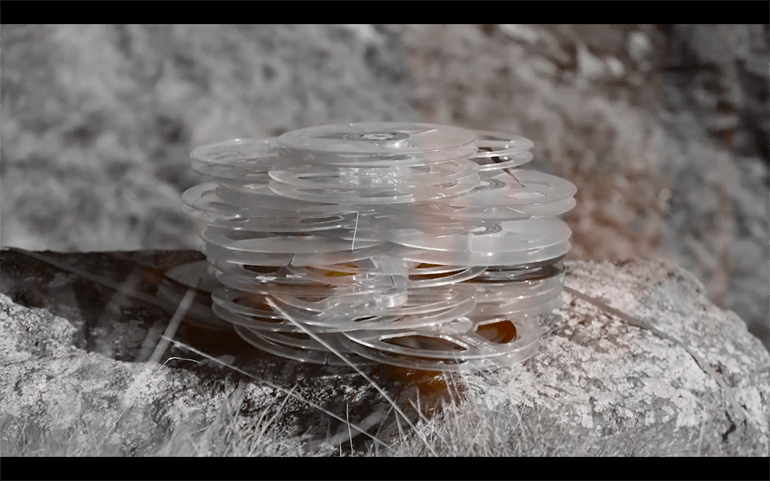 Your artistic practice involves sound recording, film photography and art-science collaboration, could you tell us a little bit how do you to work at the intersection of them?

I’m an artist and cultural geographer, and I use creative techniques to try and engage with places and landscapes that are becoming increasingly fluid, muddled and unpredictable, particularly as framed within the context of the new Anthropocene epoch.

Two common themes in my work are stillness and emergence. Being still in a landscape can allow you to comprehend slow processes that resonate out across scales – the ‘arts of noticing’ as Anna Tsing might call it. Active listening and landscape writing, sound recording (using different microphones that allow sonic traces to be recorded through a variety of materials), and still-framed film-making are all techniques that I regularly use to experiment with stillness, I suppose in an attempt to channel some heightened sense of perception.

Emergence is the process through which collections of things – humans, non-humans, materials and so on – develop new (and often unexpected) interactions, patterns and trajectories. Emergence, I think, is a key idea in understanding the world around us as dynamic and complex, which only develops apparent permanence through series of temporary equilibriums in time and space.

One of the ways in which I experiment with emergence is by setting starting points for a piece of work, and then allowing (un)natural processes to take over, whether for a few minutes, or many months and years. So tape loops might be left in polluted water baths to disintegrate before being replayed; 35mm films freeze-thawed each day and night for a winter month before being shot; or – as in Emergent Landscapes – Super 8 film pipetted with various ‘lichen spot’ chemicals (commonly used by ecologists for lichen identification) so the colours seep, whorl and run.

Here, I nod back to György Kepes’s ‘pattern thinking’ regularly, in the imaginative potential of the visual results that can emerge from such earthy processes, and the creative engagements with space and time that might result from both the doing and the viewing. So, I guess to an extent, the techniques I use allow me to explore resonances and overlaps between artistic and geographical theories and practices. I’m always trying to learn.

You are presenting as a part of Tate Exchange ‘Emergent Landscapes‘, a visual, sonic landscapes that blend sound, sculpture and lichen painting. Could you tell us a little bit about the intellectual process behind?

Emergent Landscapes is a participatory installation at Switch House, Tate Modern, run as part of Tate Exchange, which is both a programme and a space for the public of all ages and interests to collaborate, test ideas and discover new perspectives on life, through art. The installation involves two shared, public elements – cairn construction and the layering of a soundscape which echoes visitor contributions, reflections and perceptions in and around the Tate Exchange space.

In the north-west corner of the space, I’ll work with visitors to build a cairn to mark the newly built Switch House building, layered with strata of slowly activating lichen and moss paints applied by you: your marks and actions overlaid in the construction. The cairn will be constructed of clay tiles (a nod to the London Clay bedrock underneath Tate, and the tones of the Switch House brickwork), wooden cedar shingles (cut from the Hooke Park woodland in Dorset where the cairn will subsequently be installed), and a small number of transparent red perspex tiles (a prompt for us to think about the strange new geological strata of the Anthropocene).

Cairns are collective, collaborative and emergent landscape sculptures, piles of stone that act as markers, beacons, memorials, topping out points, and that are often of anonymous or uncertain heritage. It’s hard resist adding a stone to a cairn on a pathway or hilltop as you pass by: there’s something very satisfying about contributing to a growing lithic form. On Winter Hill on Rivington Moor in Lancashire (where some of the installation film was shot) it can be difficult, initially, to differentiate a bronze age burial cairn and pile of recent building rubble (from nearby television masts) sat within a short distance of each other on the open moortop; a marked tension of form and function, age and origin.

Cairns, then, might be a useful collaborative form through which to think through the expanded scales of the Anthropocene, and (arguable) human roles as ‘geological agents’ in the world. Part of the Tate Exchange rationale is to frame these engagements as experiments, so it’ll be interesting to see what emerges.

Opposite the cairn, in the north-east corner, an old gramophone horn and wooden munitions box are re-purposed as a sound-gathering device, through which you can ‘lend your voice’ to a layered soundscape consisting of voices and field recordings taken in and around Tate Modern. Earlier visitor contributions are heard only as faint traces, each affected by the reverbs of various spaces in the building (the Turbine Hall, the Tanks).  So, in effect, each new contribution you make will be part of an ongoing conversation with the flows of both people and place.

When the installation period is over, the new soundscape will be dubbed onto 1/4 inch reel to reel tape, and the spool buried within the completed cairn. The whole structure will then be transported to Hooke Park woodland in Dorset, where in collaboration with the Architectural Association and Common Ground charity, it will be made freely accessible to visitors and documented for years to come. Over months and years, it is likely that the spores and seeds ‘painted’ onto the cairn materials will germinate and grow; to emerge, pattern and even destroy the structure we create together at Tate Exchange.

How do you incorporate sound into ‘Emergent Landscapes‘?

I wanted to use sound (alongside the cairn development) as a means of thinking critically about site-specificity in this project. Sound is inherently shaped by space, by the things – people, animals, machines, weather and so on – that make sound, and by the acoustic conditions – architecture and geology for example – in which that sound resonates and reverberates.

Sound is thus a powerful means of evoking places, memories and feelings, and so processes of sound recording and active listening can provide ‘ways in’ to sensing the polyvocal, collective and constantly shifting character of the environment. Sound can also, however, be highly mutable, both in the making and in the receiving, and a sound removed from its source can be both an intriguing and unsettling transmission.

At the end of the installation period, the new cairn will be (quite literally) embedded with the soundscape recording of the flows of the Tate Exchange space, and the patterns of the lichen paint on each tile. As such, the cairn will be fundamentally site-specific, but in a way that treats its sites of creation and installation as fluid and ongoing: as meeting points for emergent exchanges. It is possible that in the future, the cairn may buckle or collapse to reveal the 1/4 inch ‘stone tape’ spool on which the soundscape will be dubbed, which will have undergone years, if not decades, of organic decay and development.

Writer, artist and academic; what directions do you imagine taking your work in?

Very similar to the present, really: making, writing and experimenting on the blurred edge of art and geography; doing fieldwork, research and residencies in new places; and producing new exhibitions, installations, publications and releases.

My family (and, probably, my studio looking out over the hills).