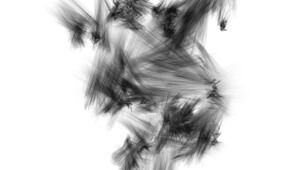 MARCUS VOLZ, an insight into the generative art debate 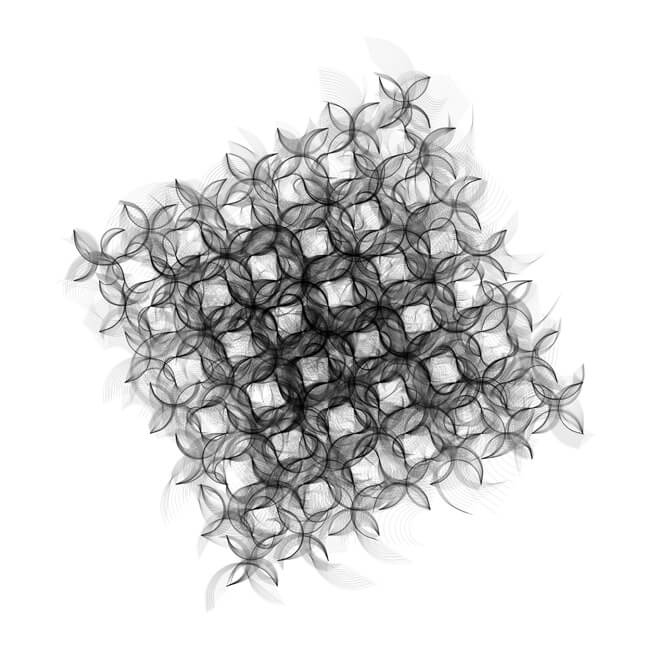 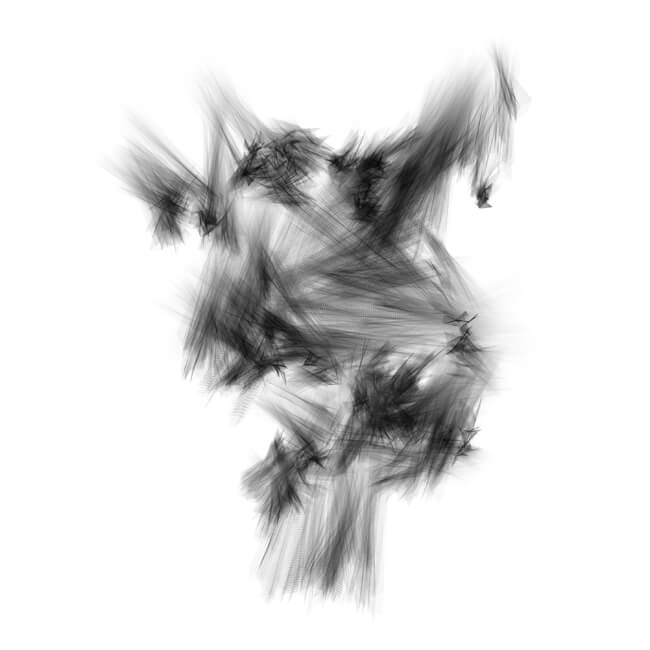 Generative art refers to the use of an autonomous system to produce artwork. Hence, such a  system can either be the creator of the work or serve as a tool for its making. Despite what you may think, generative art is not a new concept at all. The pioneers; Greg Nees and Frieder Nake started their first exhibition in1960s [1]. The exhibition titled Computer Graphik was the first one of its kind and later on, the artists experimented with sculptures assembled using computers for architecture. Computer Graphik sparked the debate of whether generative art is actually art. Since then, there has been many concerns about whether computers could be part of modern art and how do we define art to begin with.

Cellular automata– influenced by Von Neumann, the father of game theory, is one of the most inspiring works of Marcus Volz. As both a mathematics researcher in the University of Melbourne and as an artist whose interest began upon realising the aesthetics of computational geometry, Marcus Volz is a fresh breath to generative art. As a tool of his artistic work, Volz uses various coding languages such as R or gg2.

His cellular automata displays the pieces; Universal Turing Machine, Langton’s ant simulation and Turmites, all produced with the similar main idea where each cell is set up with a certain rule, being able to self replicate accordingly. The resulting images are a great demonstration of science being stirred into art. Volz’s generative art, displays the analytic nature of science used in an emotional perspective; despite its conventionally stolid application in research.

The definition of art has been a controversial topic of discussion among academics and art enthusiasts. “The 10 questions relating generative art”, a paper published by McCormack proposes intricate arguments for both camps [2]. Regardless of the definition of art one may prefer, it is still unavoidable to think whether a computer can ever be fully original. Or rather could we actually assume that even a person is capable of creating something fully original?

In a time where creativity on its own is a shaky term, how can an autonomous system possibly produce a piece that is unique and creative? Even though these questions are left unsettled, we can still enjoy the elegance of Volz’s computer generated Turmites. 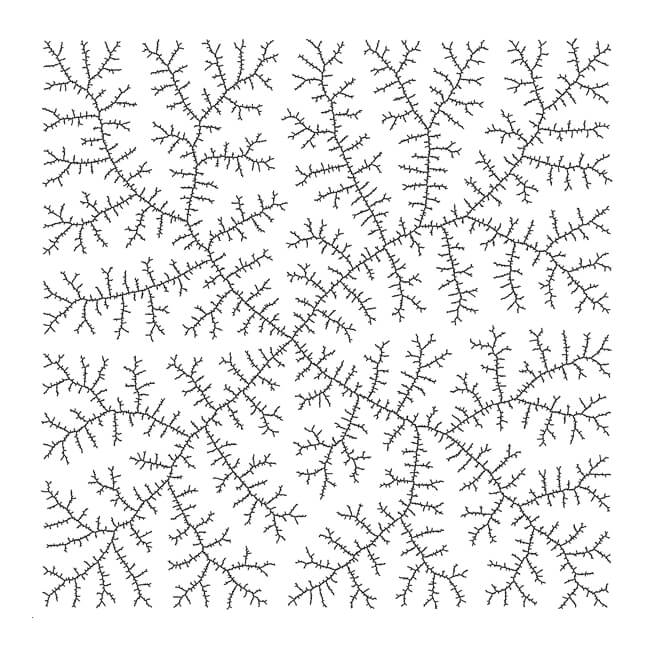 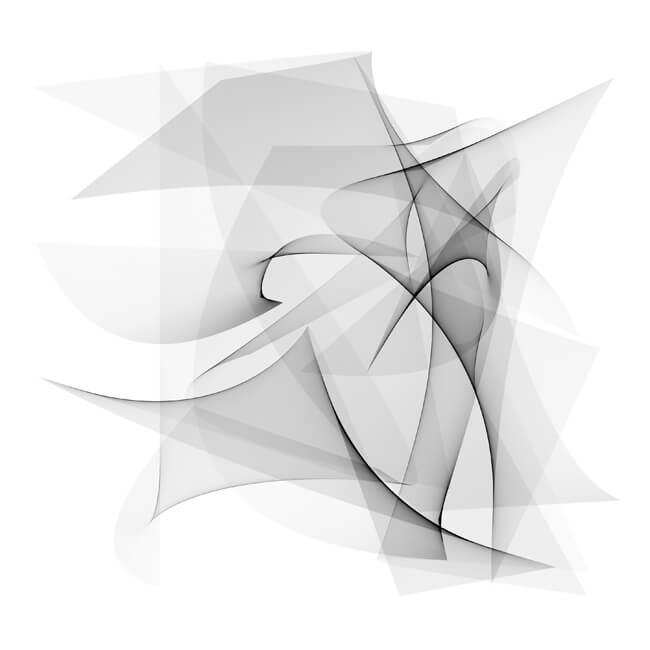 Your artistic work is based on generative art and data visualisation. How and when did the interest in these disciplines come about?

My interest in data visualisation began about 6-7 years ago when I first noticed that data scientists and artists were creating beautiful visualisations and artworks from large complex data sets. At the time I was working in a role that required a fair amount of data analysis, and so I started to look for opportunities to incorporate visualisation into my work.

I soon realised that I would need more sophisticated skills to create the types of things that I envisaged, and began to focus on improving my programming skills. Over time, my domain of interest expanded beyond data visualisation and into a diverse range of mathematical fields. Generative art – art that is produced by algorithms – was one such discipline that I became particularly interested in after discovering Jared Tarbell’s Complexification gallery of computation.

What data sources do you use for your pieces?

In my current role as a mathematics researcher I do quite a bit of experimental work assessing the performance of algorithms for solving hard geometric problems. These experiments can produce large data sets that report on things like CPU time, and these data sets can oftentimes be visualised in unique and interesting ways to gain insights about how the algorithm is behaving.

In addition, the inner workings of an algorithm can be further understood through animation, which also helps to verify that the algorithm is working correctly. For generative works, the data is simulated programmatically, rather than coming from an externally-provided data set.

What are the main challenges you face when using data to produce art?

Producing this type of art can require abstract thinking because the visualisations are created from code rather than being produced directly by hand. It usually requires thinking ahead to map out how the code will be structured, and this intermediate step can inhibit the creative process.

Sometimes the hardest part of the process is finding and / or manipulating the data into a form that can be visualised. Most of the time I feel that I am able to convert an idea into a visualisation quite quickly, but other times it can be quite time consuming to finish a work if there is a particularly challenging programming issue.

One of a series of artworks that caught my interest is Cellular automata, why the name? Could you elaborate on the intellectual process behind its inception?

Cellular automata are discrete models involving grids of cells, such as the grid of a chessboard. Each cell can take on a particular state and the states change over time according to a simple set of rules. Probably the most famous example is Conway’s Game of Life, in which each cell in the grid is either alive or dead.

At a given time step, a live cell can become dead and vice-versa depending on the states of its neighbouring cells. For instance, a dead cell with more than three live neighbours dies due to overpopulation. The simple state-changing rules can produce interesting patterns which I have found to provide a unique basis for creating artistic visualisations.

You are also a research fellow at the University of Melbourne, studying geometric networks, optimisation and computational geometry. Can you tell us a bit more about your research projects and how the research relates to your art (if so)?

I work in a team that studies optimisation of geometric networks, which can be used to model things like road networks, pipeline networks and VLSI chip design. Most of the problems that we study are based on a famous problem in mathematics called the Steiner tree problem, which asks for a shortest network interconnecting a given set of points in space. Because of the geometric nature of the problems that we study, there is a lot of opportunity to visualise the networks and other geometric constructions that arise from the mathematical theory.

I have found that visualisation has been beneficial to our work in that it has sometimes revealed unintuitive and unexpected insights have led to new discoveries and allowed the research to take on new directions. In my spare time I have taken some of the visualisation derived from the research and turned them into more artistic works.

What directions would you like to take your work into?

At present I am deeply interested in 3D visualisation and animation, and am very focused on developing skills in this field. While the tools that I use are very powerful for generating 2D visualisations and animations, their 3D capability is relatively limited when compared to some of the advanced 3D software that is available.

Pairing 3D visualisation with my data visualisation / mathematics skills will hopefully provide a unique skillset that will allow me to produce highly detailed, original and unique artworks that combine knowledge and understanding from both fields.

I would say that I am certainly not afraid of running out of ideas for new visualisations / artworks or experiencing any kind of artist’s block. I have a growing backlog of ideas that I want to explore, and oftentimes the hardest part is deciding which idea to pursue next.

Any time I come across an idea or concept that inspires me – from a book, lecture, video, etc. – I immediately want to visualise it or to reconstruct it and expand it in some creative way. This can lead to a lack of focus and can discourage large, longer-term projects, but on the other hand it allows me to cast a wide net in my exploration of mathematical visualisation and to learn new things from a variety of different fields.

(All photos courtesy of Marcus Volz)