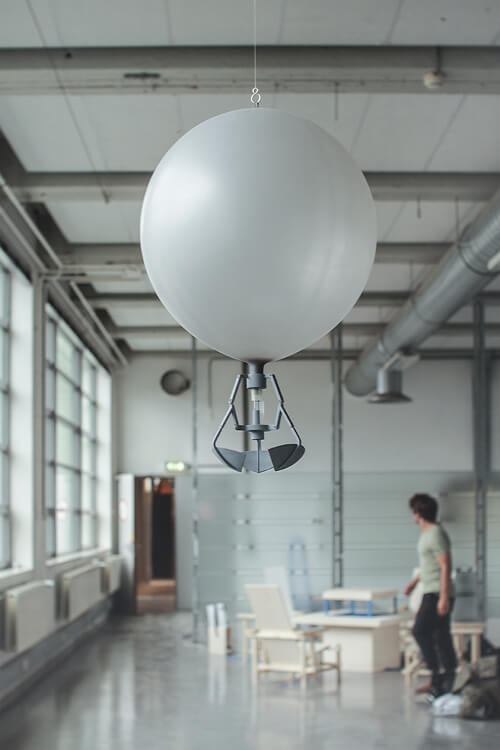 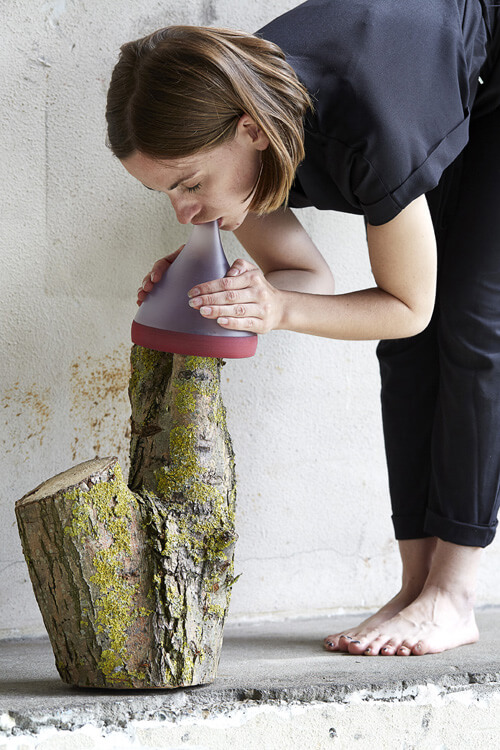 What does it mean to be an emotional creature? How do we reconcile the prevailing human-centered design mindset with non-humans? Can lichens love? For Karolina Ferenc, a newly minted graduate of the masters program in Social Design from the Design Academy Eindhoven, connecting these seemingly disparate themes is at the heart of work. Her most recent piece, Lichen in Love, is a speculative scenario where lichens – a plant-like, algae-fungus composite organisms – are presented as ‘a friend and subject of fascination’ in relation to humans. The work includes both a series of designed objects as well as a collection of love letters addressed to species of lichen. The imagined objects (a protective glass, a breathing tube, a photosynthesis mirror, and scientific balloon) provide new ways for human-nonhuman engagement.

These new forms of interspecies engagement are rooted in studies of intimacy. Take, for example, breathing tube, a two-way vessel used to guide the exchange of gases between lichens and humans. As Karolina explains in her thesis, “We have this expression in polish language – ‘chuchać’ to explain the act of breathing on something/someone. But ‘chuchać’ has a double meaning and it can also express the act of taking care of someone with great commitment.” Here, the bidirectional biological exchange gases between humans and lichens supports an emotional connection.

The same link between biology and emotion also appears in Karolina’s 2015 project, Emotional creatures, where she explores the concept of lachryphagy, or the consumption of tears. What might happen if we discard societal notions of weakness or helplessness typically associated with crying and instead emphasise the ways crying leads to catharsis and communication? The project depicts a scenario whereby the tears can be harvested and collected to be shared with others.

Karolina’s work conveys both the dire necessity to think beyond human-centered design while showing what new kinds of design can be allowed to flourish as a result. Mankind’s self-centeredness has required the creation of new terminologies such as ‘anthropocene’, ‘environmental’, or ‘nature’ to rationalise its motivations. By building on the theoretical framework of Donna Haraway, Timothy Morton, and Frans de Waal, Karolina Ferenc paves the way for deep feelings of empathy and love.

Your graduation project is a speculative scenario of a post-humanist relationship between humans and lichens, where does the interest in these organisms come from?

I grew up surrounded with a forest that wasn’t so much controlled by people. I’ve been intuitively searching for similar qualities in the city and that’s how I became obsessed with lichens, which are completely out of our control. They are a very special organisms yet ignored by majority of the people. Actually most of the people have no clue what lichens are. Sometimes they are consider as a parasite and being associated with decay. But lichens live almost everywhere in man surrounding, especially here in the Netherlands where the appearance of pollution tolerant lichens in the cities is increasing significantly.

I have always been interested with these very tiny, hard to notice creatures because they are a layer of life existing on city surfaces. They are pioneer organisms which means that they can colonize the ecological niche like concrete wall uninhabitable for other species. There is always some biological layer on the buildings or pavements and this one created with lichens is perceivable to us. By observing and studying lichens people can learn about pollutants present in the air, or about climate change for instance. It’s because lichens absorb everything from the air and therefore react to the environmental changes. So there is a very interesting tension between an esteem and ignorance towards lichens.

Taking oneself not too seriously allows to explore silly, unthinkable or naive and that is where a new and exciting can take place. It’s about leaving the ego shell, which I find very relevant nowadays in design discipline.

In the same time it’s urgent for creative people these days to remain critical and ask questions about own creation in order to avoid solutionism and solutionist’s trap, and ‘I know everything the best’ traps.

It’s not a new one, but still very vivid fascination with the philosopher Timothy Morton. Proposed by Morton scientific, philosophical and emotional landscape includes all living and inanimate beings. Human doesn’t impose his/her concept on these non-human beings, but attune to them or merge. So there is something humble and genuine about what he is saying and I’m really attracted to it. I’m not only a human but also a bacteria or a virus. Just think about that!

Early early morning when most of the people are still asleep. It’s a highly productive time. I guess it has something to do with an absence of city noise. Also being not fully aware because of a sleepiness makes my morning work sessions very enjoyable.