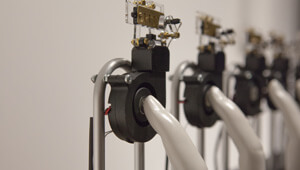 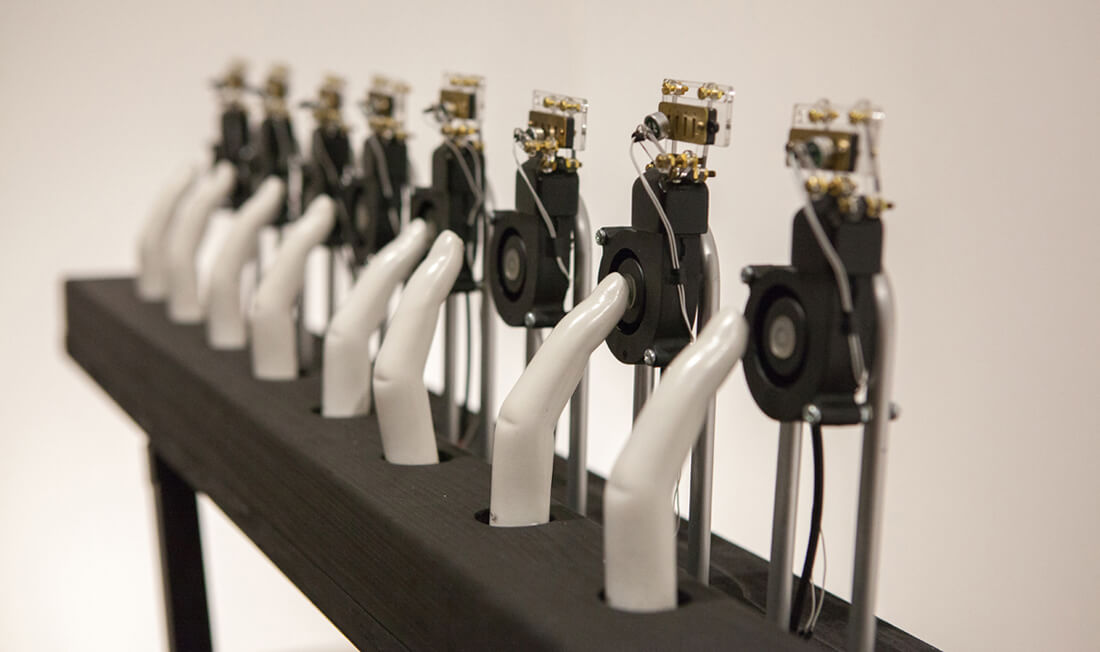 A broad range of humans who have access to any type of 21st-century machinery have gotten used to doing a broad range of things at the same time. Simultaneously, you check your social media accounts on your phone. Work. Watch a movie. Talk to a colleague. Whenever something really captures your attention, it is something with a bang. A video with very intense special effects. A movie with a psychedelic twist. In this equation, someone like Jonghong Park appears. His work is calm. Serene. It needs no over-complexifying, no gimmicks or flashy elements. It is unique in its simplicity, and beautiful in its concept. It dares you to stay put for a few moments, to do nothing else but watch. Experience the moment that he situates you in.

However, it is far from interactive art. The visitor has no real-time input into the work of art, which is done by a machine. The machine is an independent entity, doing its own job. The visitor is there just to observe and understand. Begegnung is an installation (or better said, machine), in which the artist looks at the relationship between coincidental and intentional. He studies how raindrops fall on a glass. This is not intentional. But the movement of the machine wiping these raindrops is. However, by wiping, a new movement and behaviour of the raindrop is created, thus going back to coincidental.

In all of Park’s work, the machinery is minimalist. A machine that is built to serve a purpose, and does not make an aesthetic statement. It is not hampered by unnecessary details, nor by glamorous materials. It is simply a machine. However, it gains more and more nuances through its actions. In works such as  Begegnung (2017-18), specific noises are created through the movement of water and wipers. The same “machine noise” can be found in Do Humans Dream of Machines? (2018), in which the model fingers poking buttons create a mechanic, unique symphony.

One of the works in which Park showcases his “nature meets machine” ideology in an almost instinctive manner is “Loss”. The project showcases the resemblance of “physical decay” with that of “digital decay”, in a very simplistic manner: an electronic amplifier measures the electrical resistance from a decaying tree. The measured analogue signal is converted into a digital signal and the amount of electrical resistance loss of a tree is calculated Pixel data of an image, which is damaged according to this signal value. Park argues that these two phenomena belong to “the same functional concept of loss of original data. Therefore, the function of these two different objects constitutes one equivalent relation to the concept of loss”. The digital result is similar to those of the Deep Dreaming experiment, leading again to the humanisation of the machine and digital elements.

Looking at all of Jonghong’s work and reading his thoughts on it, it is impossible not to notice a certain humbleness. This is a genuine feeling of modesty – born from knowledge, which leads to an honest feeling of respect to both the natural environment as well as the man-made one. Jonghong Park is a keen observer. Researcher. Philosopher. His work is well-thought off and deeply rooted in existing realities. It is as relevant now as it could have been 50 years ago or 50 years from now, in the same way societal, ethical or scientific problems resemble from one epoch to another. Park is as much of an artist as he is a coder, sociologist or mechanic. And it doesn’t even matter. The important part is that you listen to what he is showing you. 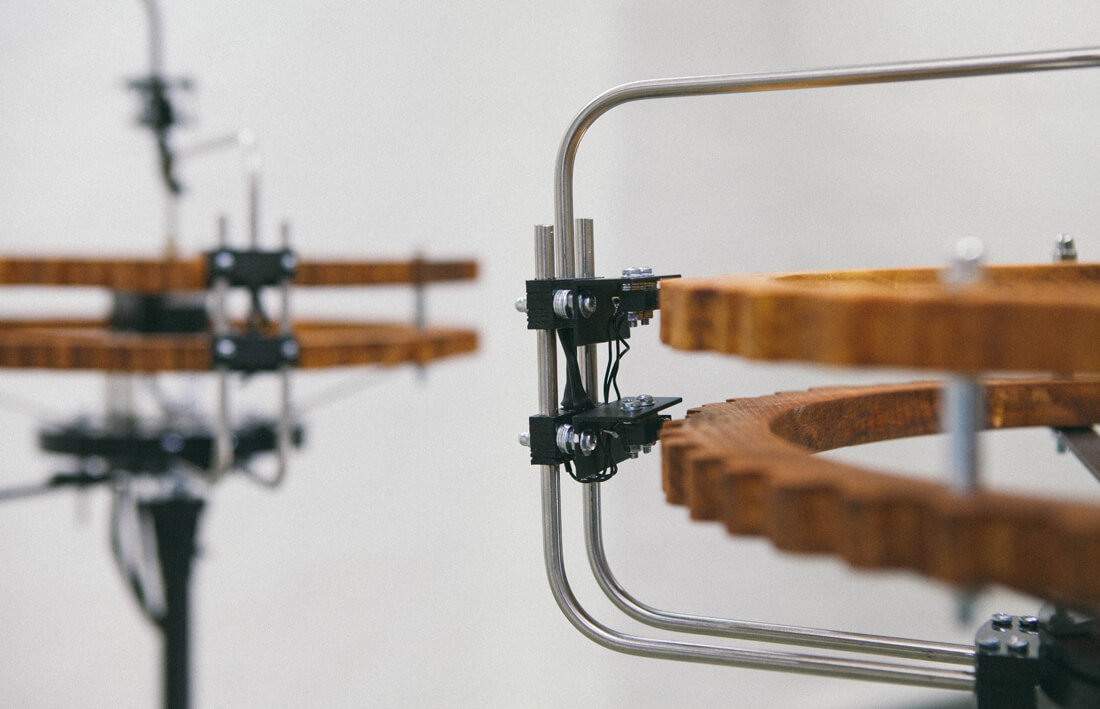 For those that are not familiar with your work, tell us a little bit about your background and how the interest in technology, science and art came about.

My work started from curiosity about nature. What is the world composed of, how does it work, and what is the source of life? These are somewhat banal questions, and also difficult or impossible to answer. Many people seek appropriate answers for them from religion, or it can lead to philosophical or scientific inquiry. The description of nature is being interpreted and studied differently in each field of studies such as physics, molecular biology, cognitive science and metaphysics. However, These interpretations of nature are never separated. These seem to be different studies now, but I think they must converge. Eventually, modern technology and science are rooted in natural philosophy.

Currently, they are subdivided and studied in their respective areas of expertise, but it is our mission to converge and merge them together, and furthermore, I think that the starting point of this is in art. That’s why my curiosity regarding nature often goes beyond science and reaches into philosophy. Science allows us to define ambiguous and metaphysical concepts in philosophy as a single rule, regulation, or algorithm. On the other hand, philosophy allows us to define the laws of motion in science, and the meaning of algorithms in nature. In the end, I think that we can review human beings, the specific existence belonging to nature, through this process.

Begegnung is one of your latest projects in which you explore how can be explained as an intentional encounter between humanity and nature and translate that encounter into sound. What is the role of sound in your art pieces?

The raindrops that fall on a windshield on a rainy day, the wipers that remove them, and the raindrops that once again form on the windshield. I felt like this relationship of rain and wiper, which is constantly repeating this erasure and creation, is like an algorithm that represents the relationship between nature and humans.

The rain is nature itself. A lot of droplets of water are falling down and they hit the trees, grass, and buildings, creating the sound of nature. When it rains, the water in the valley becomes louder. A lot of water droplets hitting each other create louder sounds. In these numerous natural encounters, we cannot interpret the exact rules or algorithms. However, we can perceive these encounters as sounds, depending on space or place, the amount of rain, the intensity of the wind, etc., and the sounds are all alike but completely different. These sounds definitely become information. Natural sounds surely include human-made sounds. But human sounds are not accidental. Human behaviour has a purpose and an intention. The human sounds account for the information we can understand.

Therefore, I wanted to create another sound that is made from an encounter between nature and humans that is different from the sound of rain. Nature creates raindrops in a random pattern, but wipers deliberately erase this information, which leads to nature creating new patterns again. These accidental patterns can never be interpreted as specific information. But these meaningless droplet patterns are similar, and at the same time definitely different. Sometimes harmony is created and sometimes dissonance or unfamiliar melodies are perceived, but this is also the encounter of human beings and nature, so I thought it was meaningful unto itself. A wiper that moves by human intention is like the conductor of a natural algorithm. Or it is creating a rule in nature. These encounters create a different sound from the sound of rain that can be considered to be an accidental harmony of nature. This sound is another natural sound that humans belonging to nature created with nature.

We need to look at machines with a new perspective and think about them. We often consider what we call machines or techniques beneath the category of human. This is because they are created by human needs, created by humans, and exist for human beings. This is very natural. However, one clear fact is that human beings living in this world are dependent on machines and technology from the past to the present, as we cannot live without machines.

Without machines and modern technology, the system itself would collapse, and this goes beyond simple comfort. That is how much we depend on machines and technology. What is interesting is that in the relationship between humans and machines, machines can be regarded as one living thing or a giant organism. A bee cannot live without flowers and flowers cannot exist without bees. Just like this, the machines and human beings coexist.

The technologies we use every day, such as cell phones and the internet, evolve through human beings. If they are developed by human beings and eventually equipped with autonomous thinking due to some unique attribute, they will replicate and evolve themselves in another way different from us just like the processes in nature. Nature is no different. Numerous species of bacteria, trees, grasses, and even mammals all settle and evolve on the earth in their own ways. There is no reason not to imagine the future evolution of human form as something that is combined with electrical technology. The dystopian idea, in which a machine civilization born from uniqueness dominates mankind, begins with the definition of man as the supreme species of nature.

The need for animal protection, a topic that has been an issue for quite some time, is now a reflection of the spirit of the times placing human beings and animals, which are a part of nature, on an equal footing, moving away from the hierarchy paradigm of older species. However, what we need to consider right now is the concept of life. Many people worry about machines that can think, robots with consciousness and so on. The reason is that this machine, which is not made of blood and flesh, does not seem to be a part of life that should be respected properly. But machines are also part of nature. They all exist in the same system and do not violate the laws of nature. We are synthesizing natural materials that the machine did not intend and are creating life. So, cybernetics information theory is closely related to molecular biology. It is the same story of creating life. We must prepare for the time where they can replicate themselves and self-organize like bacteria or cells. The time where we must accept the existence of a machine as an equivalent creature.

The first thing I would like to mention is that I am not a creative person. I cannot do intuitive creation. If I have to present anything in an hour or a day right now, I have nothing. I feel that way even more where it is necessary. I do not know how to create in a genius and intuitive way beyond the paradigm of ideology and the time. So for me, I need enough knowledge and time to think. I have not studied many books, but I try to read more books and try to review them. During that review process, I come up with speculative stories and ideas.

There is an ideology and an understanding of science for an era I did not recognize in SF novels and movies. In addition, they give enough rest and stimulation. Numerous physics and information theories are from the efforts and aspirations of researchers who describe nature in mathematics and science. The story of Whitehead and Bergson has deep mathematical insights and metaphysical understanding of the world. These efforts and aspirations inspire me, and the vague thoughts of metaphysics compel me to create something again.

(Photos and video courtesy of the artist. Photo 1 Do humans dream of machines?)