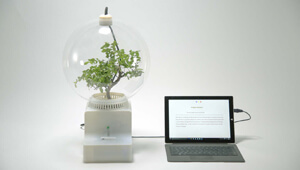 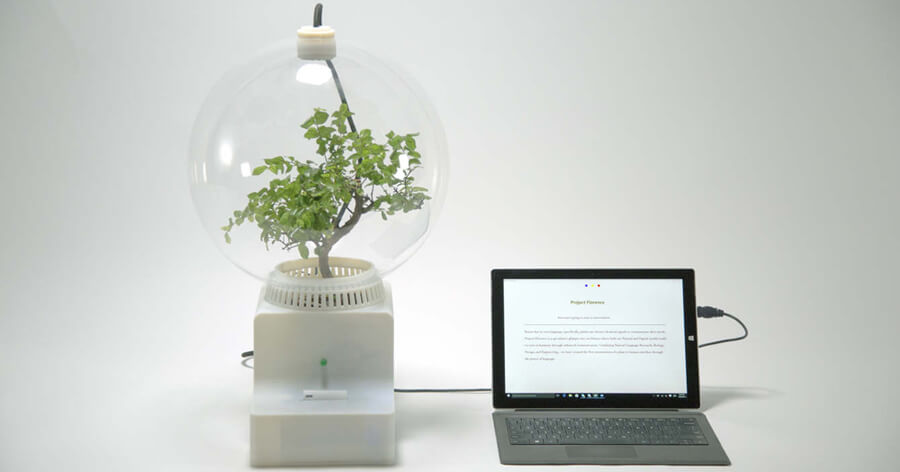 At this particular moment, Helene Steiner is the CCO of Cell-Free Technology, a company that makes biocomputers capable of sequencing and analyzing DNA, which she co-founded in October 2017. But the London-based designer and engineer has had so many jobs since her graduation from Bauhaus University in Weimar, Germany that describing her by this single title, impressive though it is, does not do her justice. The breadth of her passions and talents is evident in her professional history thus far – Steiner, who has previously been featured in CLOT Magazine for her work on Open Cell, has spent many months as a researcher at MIT, a postdoc researcher and artist at Microsoft, and a lecturer at the Royal College of Art. Steiner has garnered such accomplishments while completing her Master of Science and Master of Arts in Innovation Design Engineering at the Imperial College in London and the Royal College of Art respectively. Her inventive energy has driven her in leaps and bounds through the art and engineering worlds.

Steiner’s work breaks down the barriers she perceives as keeping human beings isolated: the divisions between ourselves and our surroundings, ourselves and our machines. In her own words, she enjoys the tension between the natural vs. the artificial and the physical vs. the digital. She is driven by a childhood fascination with building things, with manipulating the natural world and watching nature affect us in turn. In her talk at the 2016 TEDxUAL (University of Arts London) event, Steiner recalled making dyes and soups out of the plants in her backyard, a game that led her to wonder what invisible processes were unfolding inside the plants and start investigating that question with technology.

Though her creative work has this whimsy and youthful curiosity at its heart, it remains firmly grounded in her product design sensibilities. Her work is eminently practical, as well as aesthetically and conceptually appealing. A piece like polyp, a modular wall hanging where each segment is a laundry basket, shows off her product design background. Users store their dirty clothes in each segment, where they remain out of sight until the baskets fill up and the clothes start to show, at which point the unit alerts the user. The user can then easily remove the segment from the wall and transport it to the washing machine, as the capacity of each segment matches the load capacity of the washing machine. The name and appearance of the piece comes from the structural units of sea anemones, and so the baskets each have a lovely, clean look, but they are meant to be functional for everyday life.

Steiner examines a more futuristic functionality as an engineer for bioLogic, a sub-project of MIT Media Lab’s Radical Atoms Project, which aims to create versatile, reconfigurable materials for use in daily life. bioLogic is a material composed of the bacterium Bacillus Subtilis, which is sensitive to changes in humidity and expands or contracts accordingly. Steiner’s team has partnered with New Balance to use this material in athletic wear, creating flaps of clothing that can curl away from the body to allow for additional ventilation during periods of intense activity. This “second skin” is a fascinating piece of biological engineering, but the promotional video for it – cinematic and clever – could stand alone as its own form of art.

Helene Steiner calls herself a designer rather than an artist, and while her elegant work reveals a keen artistic eye, this distinction seems fitting. She strives to create products, installations, and materials that engages us above and beyond the call of traditional artwork; Steiner epitomizes the dream of making others’ lives better through her art. 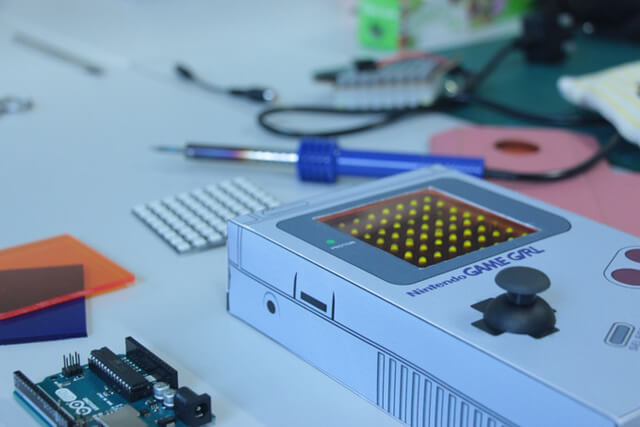 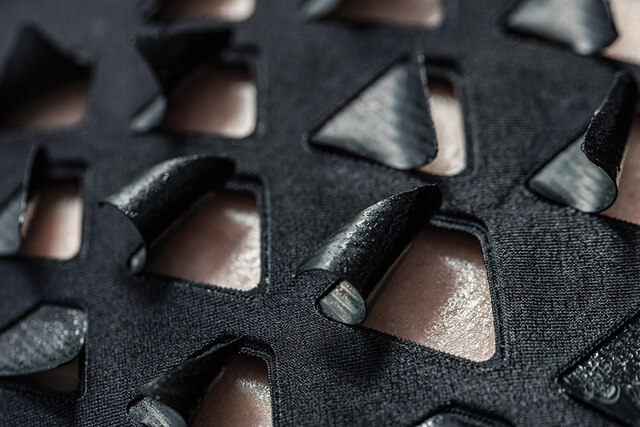 Your research follows on biological blurring the borders between the artificial and natural worlds.  For those that are not familiar with your work, how and when did the fascination with them come about?

During my first studies in Product Design at the Bauhaus University Weimar, my interest focused on how we can create interactions with our environment and how products dictate this interaction. My ideas reached from educational tools, like EDU book, to foster learning about our natural environment to sticks, mankind’s first tool, to create new playful interactions with our surroundings to draw our attention to it.

The border between what is natural and artificial quickly started to blur. And I started to question what is truly natural and artificial. Is my domesticated and optimized houseplant compared to a wild one natural or artificial? Are cities artificial or are they part of today’s natural environment? If they are artificial, were they at some stage natural and if so, how far would we have to go back to get to this state? Our food is a very good example. Around 30.000 years ago humankind settled down to cultivate plants. Since then we manipulated our world on a large scale with the help of tools we built.

The tools since got more and more sophisticated but not the way we use them in respect to our ecosystem. I do see mankind, including our behaviour and tools, as part of our ecosystem but the systems and products we built are purely human-centred. As a designer and engineer, I wanted to find a way to create tools and systems which bring our environment into our decision-making process. Systems which work with the ecosystem rather against it.  Technology can be here the conductor and moderator between different species, allowing us to make ecological democratic decisions and to work as a modern ecosystem.

In the near future, the need for electronics to do such things will diminish. We will have biological interfaces that will allow sophisticated interactions and communication between different species. A first example of such was project BioLogic, a responsive second skin which builds a direct interaction between bacteria cells and our skin. Here the border between natural and artificial has vanished.

Project Florence uses living plants as conduits for human communication. It represents a preliminary exploration of symbiotic information processes between human and plants. In what ways do you think interactive and digital technologies are changing or affecting human behaviour?

The original idea was to translate reactions in plants into something human-readable to integrate them into our decision-making process. Project Florence was the next step to explore if there is a way of a two-way-communication between plant and human and a first exploration to turn chemical reactions in plants digitally on.

In this project, we used language as a human input and light frequencies as a plant input and translated through the help of natural language programming human sentences into different light frequencies and durations. Similar to a morse code but sent through a biological organism and translated the plants’ reaction back into human sentences. The final output was an interactive installation to allow a wide range of people to explore the potential of biological interfaces and to learn about the effect of human activities on plants.

I think that technologies themselves are not changing human behaviour. They are just tools. How you apply and what you create out of them is what will change and affect human behaviour. That’s why design is so powerful.  Tools and the associated knowledge needs to be democratised and open-source to ensure people can have a voice by building themselves an understanding of technologies. Interactive installations such as Florence or educational tools like Bixels can help to create access to often inaccessible knowledge and tools while contextualising its potential impact.

Bixels is a bio-computer powered by jellyfish DNA that plays Tetris and other retro video games. Could you tell us the intellectual process behind it?

While teaching BioDesign for two terms at the Royal College of Art, my colleague and I were lacking the educational tools to enable all disciplines to bring their skills to the table, while exploring that biology needs multiple other disciplines to apply it.

That was the moment Bixels got born. We wanted to create a STEAM education kit which is at the intersection between physics, computational, biology and design while giving the opportunity to explore a range of applications and explorations of biological interfaces. While doing this it teaches the foundation of how to program with DNA & how to build a biological circuit in comparison to traditional code & electronic circuits. In addition, it demonstrates the possibilities of interacting with biomaterials through physics and material explorations.

Why specifically Tetris? Because I was a Gameboy nerd as a child. We used it as an example of what you can achieve at the intersection of biological and digital programming.  To enable that people can program with DNA, we used a unique technique, called Cell-Free Technology.

Biocomputing, biomimicry, biodesign and other disciplines that cross the digital and biological worlds are increasing in popularity. How do you imagine a not-so-distant future in which the digital and (even analog) will blend closely with the living?

I think it is already happening on so many layers. We will see more and more bionic limbs which seamlessly integrate with our own bodies. Brain-machine interfaces which will allow us to alter ourselves and the world around us. Smart biological materials optimized for their usage and responsive to their environment enabled through computer-aided systems. New biological and sustainable materials produced by new manufacturing methods for a better supply chain cycle. We will design new food, drugs and materials on the computer, produced by nature.

But it won’t only be used for new, the intersection of the living and digital will help as well wildlife conservation and study our past and present. And not all of it will be good. First, we have to create an understanding of creating systems which work with our ecosystem, which showcase a long-term thinking and illustrate an understanding of the effect and power of our technologies. We need to rethink how we are doing things today.

Water, (good) food and a lot of walking. I am a simple creature.