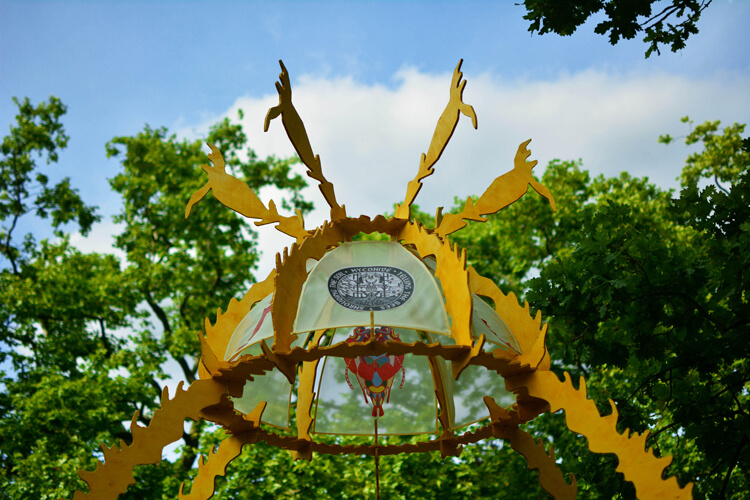 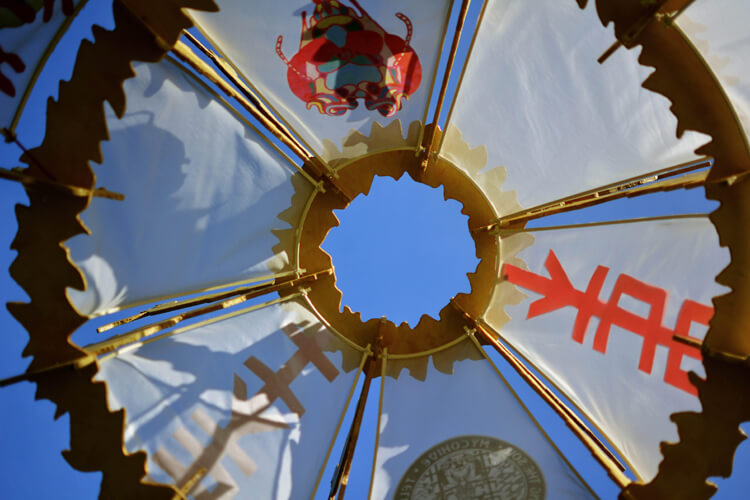 I came across the work of Amanda Baum and Rose Leahy for the first time last year in Barcelona. We did not have a chance to talk, but I saw, firsthand, their project Akouo: Memory Object (2016), a collaboration with Jolien Van Schagen. Human beings communicate with each other through gestures, smells, noises and sound before acquiring the ability to use speech for communication. In Akouo: Memory Object the three are inspired by the fact that, ‘when a sound is made it never disappears from the environment it was made in’. They imagine a future scenario where the sound is a ‘mediator for social interactions’. The sculpture is a loop system with a microphone embedded that without any interruption records and plays out surrounding sounds.

But it was during this year’s Royal College of Art Graduation Show that I had the pleasure of meeting them. Baum & Leahy were presenting their graduation project Mycohive: Telling the Bees, Shrouding the Soil. Recent studies show that Reishi (Ganoderma Lucidum), a mushroom known by its immunological properties, is one of many that can protect honey bees from Varroa mites, a parasite that sucks bee blood and is the most prevalent cause of honey bee colony collapse [1]. Mycohive: Telling the Bees, Shrouding the Soil follows this scientific research on the immunological benefits of mushrooms and pagan rituals to explore the symbiotic relationship between plants, bees and mushrooms.

Others projects that caught my attention were Phonoculos (2015) and, more recently they presented The Alien Present (2017) as part of Entangled: Art, Science and Quantum Computing at the V&A Museum (London). Phonoculos, a collaboration with Olle Alm and Annelise Keestra, is inspired by the chemical pheromone communication between ants. Pheromones are at the tips of the antennae and help the ant to choose the way to turn. From this idea, the four created an installation in which participants wear a helmet —the Phonoculos helmet— that diminished the vision, so they have to move around by sound rather than sight. At The Alien Present, an interactive sculpture made from a quantum random walk simulation*, they imagine a future scenario in which quantum computing is influenced by ‘the caring, nurturing practice of gardening’ to explore our relationship with emerging technologies such as quantum computing.

Ecology and how humans relate to it is one of the central axes of Amanda and Rose’s artistic practice. They focus awareness on pointing out the connection humans have with other species making us think that a future in which humans live in harmony with and respect for the Earth is possible.

Baum & Leahy are continuing their collaborative practice during a residency with the Florence Trust in London starting in Autumn 2017. Also, they have just begun a long-term collaboration with Øyteateret in Oslo and an upcoming collaborative project with Danish publishing and curatorial platform Laboratory for Aesthetics and Ecology.

*It was built by Amanda Baum, Rose Leahy, Robert Walker, Sam Morley-Short and Jeremy Adcock, at the Center for Quantum Photonics (CQP) in Bristol.

Your graduation project at RCA, Mycohive: Telling the Bees, Shrouding the Soil, explores how human rituals can trigger and help remediate symbiotic relationships between mushrooms, bees and plants. For those that are not familiar with your work (or couldn’t attend the graduation show), how did you come up with the idea? And where does the interest in these organisms come from?

The Mycohive project emerged from an ongoing fascination with collective behaviour – in mycelial networks, hive mind dynamics, swarm architecture, interspecies symbiosis and sympoiesis (living and making with), as well as research into complexity, which is what weaved so many topics into one work. Amongst the many attractive species to study, we have always been drawn to the superorganisms of insect and fungal communities, from the wonders of waxy honey bee hives to the moist underground network of the Wood Wide Web. A turning point in the project was when we found that, in addition to securing the health of their ecosystems, these superorganisms interact in a healing relationship together.

Mycologist Paul Stamets’ recent research shows how honey bees use certain mushroom species to self-medicate against viruses spread by the Varroa mite. In opposition to current techniques employed to combat these viruses, using mycelium extract from medicinal mushrooms, such as reishi, chaga and amadou, has proven to be both extremely efficient and environmentally harmless. This struck us as an interesting mode of earthly survival through interspecies healing and inspired us to translate their interconnected material, sensorial worlds into a human-scale

Experience. However, the project truly started to form once we combined this contemporary science with research into healing and transformation rituals practised through time and across many different cultures, particularly the folklorish tradition of ‘telling the bees’. In this the beekeeper’s family would inform the hive of a death or a change in their keeper’s lives, by performing different rituals such as singing them a rhyme, shrouding the hive and offering them funereal sweets. In Ancient Near Eastern and Aegean traditions and myths, bees have been considered the bridge between this life and the ‘afterlife’. In a more literal sense, these qualities are similar to how fungal communities enable the transformation of dead matter into new life.

We see our project as a form of materialised love letter to these species we are so vitally entangled with, but also constantly afraid to lose – or be dumped by. Even though we believe that life will continue and change in unpredictable ways with or without us, we hope that Mycohive can bring to light all the under explored acts of survival happening right now. In creative practices engaging with scientific research, we see a lot of projects where biological organisms are taken out of their habitat to become works of art or design. For this project what we found the most interesting is how we can create structures and systems supporting how these organisms already live and have evolved to work over millions of years.

Your are continuing your collaborative practice during a residency with the Florence Trust (London ). Could you tell us about the work/projects you are developing there?

We are still working with the Mycohive, that will ideally travel to environmentally damaged sites where soil health and bee populations have been affected, as well as to shorter term exhibitions and events. The structure itself works both as a practical place for performing the bioremediation and a communal place for hosting workshops, rituals and gatherings that inspire discussions around the topic. The Mycohive structure is flat pack, so it’s easy to set up and able to travel to many different places. With more time now to work in depth with both scientific and artistic aspects, and some exciting opportunities emerging, we hope that the project can act as a model of how environmental action can be married with ceremonial celebration.

Additionally, we have just begun a long-term collaboration with Øyteateret in Oslo, working on Opphav, a puppet show written by playwright Amalie Olesen which follows the development of microbial life from primordial soup through evolution into a speculative, more-than-human, sci-fi future. The project is based on Lynn Margulis’ theory of symbiogenesis. Using puppet theatre to story-tell about microbial life has proved a perfect match so far, as both theme and form remove the centrality of the human, allowing for materials and nonhumans to take centre stage. Alongside our practical projects, research and writing will continue to play an important role in our work. One upcoming project is to collaborate with Danish publishing and curatorial platform Laboratory for Aesthetics and Ecology on publishing an edited version of our collective dissertation Weaving Worlds written by the two of us, fellow RCA’er and collaborator Robert Walker, and a machine-learning-algorithm programmed to deconstruct our texts and find latent semantic patterns between them. The idea emerged from the need to disrupt purely human logic and intellect and by bringing in other forms of logic, using technology as a gateway to understand more-than-human matters. Continuously, while working on these projects, we aim to spend time giving name and shape and colour to our collective studio. Apart from these plans, we stay open to the unexpected.

What impact do you think the residency is going to have on the way you approach your art form?

The Florence Trust residency is an opportunity for us to work in depth on projects that require long-term experimentation and research. For the first time, we have a studio together where we can slime out in many directions, experiment and work more patiently to allow materials, images, text and colour to build up in the space. We imagine the building itself will impact on our process – St Saviour’s is a neo-Gothic Grade I-listed church designed by William Whyte, embellished with stained-glass stories and painted pattern walls. In addition to the crisp church atmosphere and singing silence filling the 20m-tall room, there’s a beautiful wild garden surrounding the building, which we are looking forward to working in as well.

Apart from the direct creative influences, the residency will be a great opportunity for bridging study and professional life. We’re looking forward to having time and space to work on larger commission work and exhibitions, along with the support of the mentorship that we will receive there. Additionally, we will be in a creative community – the residency will be shared with eleven other artists working broadly across many subjects and media, creating much opportunity for cross-pollination of ideas and critiques from outside our bio bubble.

One of our mantras is to take pleasure seriously. Whilst working with serious environmental issues can be heavy at times, we try to tackle the subject with poetry, humour and openness. Our intuitive approach feeds into our work, that seems to attract and inspire people to engage in conversations about all the opportunities for solutions, rather than dwelling in the same old dirty sludge of hopelessness and despair.

We aim to mimic the pioneering spirit of the organisms we study – they don’t have time to take themselves too seriously, there’s too much to do. All that said, we take seriously the microbes in each other. We’re very grateful that they’ve evolved for nearly 4 billion years to appear exactly here and now in our brief human symbiotic practice.

If you could visit someone else’s mind, who would it be?

Without sounding too Disney, the Mycohive really grew out of each of our personal affections with and interests in these organisms, so right now, we would like to visit the umwelten of bees and mushrooms. As art and design researchers working to weave together the human and nonhuman scales of experience, at the heart of our creative drive is to practice interspecies empathy.

We’ve speculated a lot about the experience of being another species – we colour co-ordinated the Mycohive to appeal to the visual spectrum of honey bees, listened to the sound of humming bee hives, did mushroom-style networking and in the heat of it all, one of us even dreamt of being mycelium moving through the soil… If it had to be human minds, we would each visit either Donna Haraway or Karen Barad’s head and go for a drink together.