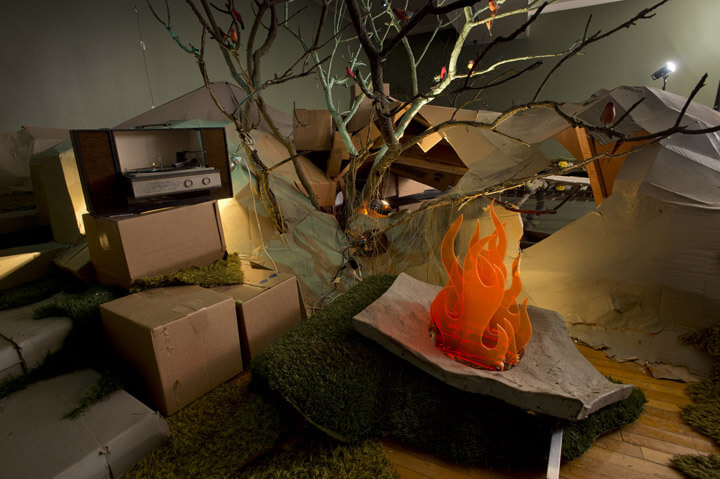 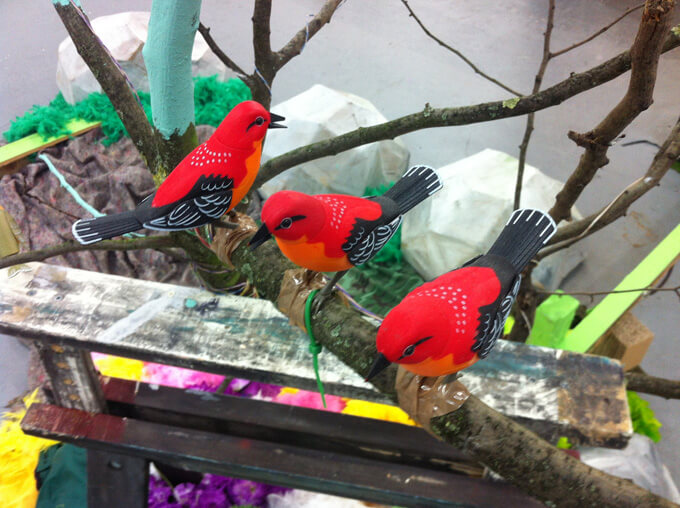 (Hint of the Hinterland) 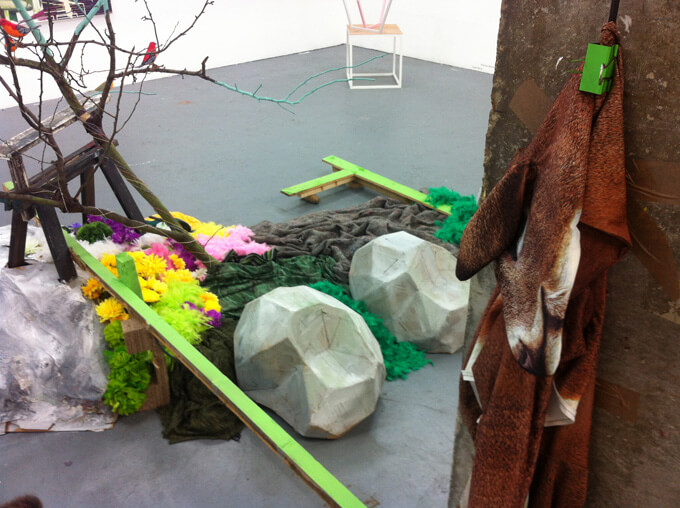 (Hint of the Hinterland)

Robert Hengeveld is a multi-media artist living and working in Toronto (Canada). Hengeveld is that kind of visual artist that not only tells a story but also explores new visions about the future of nature. His creative universe, which holds strong roots in environmental issues, spans between reality, fiction, perception and preconception. Hengeveld is also part of the next expedition of The Arctic Circle 2017, an annual expeditionary residency program that brings together scientists, artists, educators and architects

One of consequences of domestication, farming and fishing is the loss of species and Hengeveld, whose aim is to promote protection and respect of the natural world, incorporates concepts from environmental sciences to make us react about the impact of the human activity has on it. His installation pieces, specially In Pursuit Of Paradise and Hint Of The Hinterland, are mixed post-utopian metaphors in which cyber flora and cyber fauna made from wood, steel, aluminum, found objects or electronic mechanics live together in a kind of surreal and dreamlike paradise.

The role of the artist as communicator is not only to raise awareness of issues and concerns but also to make us get involved in changing how we relate to the world we live in.Hengeveld, through his allegorical In Pursuit Of Paradise and Hint Of The Hinterland, plays the role of a narrator whose challenge is to change human perception of our place in the universe while leaving at the end in our hands the final interpretation of them when thinking about reality versus fiction. 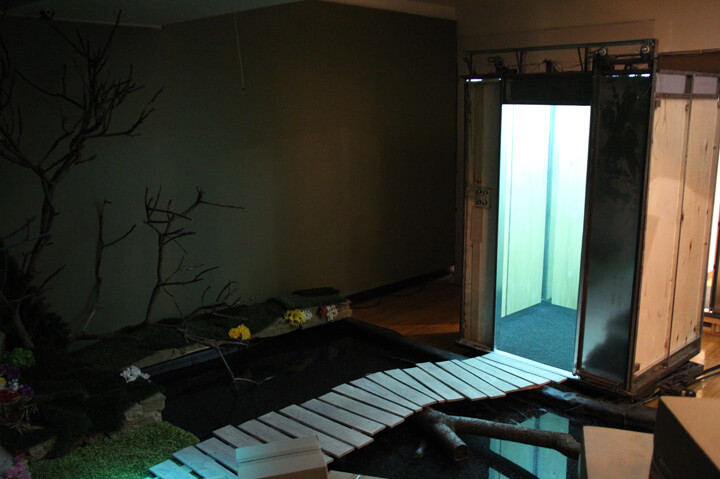 (In Pursuit Of Paradise) 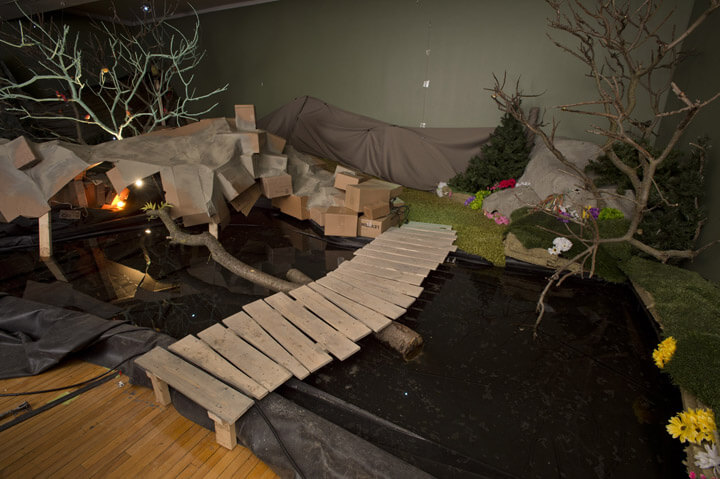 (In Pursuit Of Paradise)

Your mechanical installations —idyllic representations of nature in which motion-activated birds and other animals live peacefully happy— lie in between science and technology; what drew you into working in the intersection of technology, kinetics and environmental sciences?

Science and technology has been a subject of interest for sometime but also a method of working.  It’s prevalence within our society has in many ways influenced every faucet of our culture.  It has changed how we relate to one another but also how we understand and navigate our way through the world as a whole – both natural and manufactured.  Creating a project like kentucky perfect in which a small strip of turf is meticulously cut, watered and cared for is a response to this evolving culture.

My work is often exploring this odd and complicated relationship we have to our natural environment and how technology continues to shape it. A bird popping out of a drawer or several decoy deer spinning about in a choreographed dance is rather absurd.  And yet in truth these are only an amplification of the curious culture we already live in – where red plastic lumber is embossed with woodgrain, solar-powered butterflies twirl around our gardens, or caged mechanical birds twitch about while small bellows mimic their song.

Surreal installations of nature manufactured to explore the boundaries of reality and fiction; could you tell us a little bit more about the intellectual process behind these recurrent representations of manufactured nature?

These projects have really been a way of working through questions I find myself asking.   Why do I see a plastic flower as somehow inauthentic or kitschy and yet not think twice about the ubiquitous manicured lawn?  Is one really any more authentic than the other?  It’s all rather fickle isn’t it.  I’m interest in that – in how we as individuals resolve this bias – particularly as it relates to the natural world and our increasingly mediated relationship to it.

My installations and other site-specific projects take what has become familiar, or what we know to be real, and repackages it; a rotating tree, a floating shopping cart, or maybe it’s an assemblage of christmas trees, shag carpet and cardboard boxes that standing in for a landscape.  It’s within these moments, where the familiar becomes unsettled – and our preconception of what we are seeing is put in contrast with our actual perception.  It challenges our preconceived notions of the authentic.

The installation In Pursuit Of Paradise is an interactive work that plays with the perception of the audience; if you would have to give up one of your five senses, which one would it be and why?

I’m not sure I’d want to give up any of the top five so let’s make it seven senses in which case I’d give up common sense – hands down.  I’m not sure it does me any good.  Of course I think it does in the moment… because it’s common sense right?  It’s interesting though, how so many people can have such a vastly different ‘common sense’ perspective on the same thing.  Makes you wonder how useful it really is.

All the other senses, sixth included… I’m quite content to hang on to those.

I’ve been invited to participate in an expedition to the Arctic along with several other artists and scientists.  One of the things I plan on experimenting with is stereographic and far-infrared technology.  It’s a bit of a throwback to the scientific technology used to chart the sea ice back in the 1980s.  The equipment has changed somewhat since that time but the basic scientific principals are the same.  I’m sure  there are some rather unorthodox ways of using this equipment and I hope to find that out.  I imagine that this, and the opportunity to collaborate with some other artists and scientists, might lead to something altogether different.

This is such a interesting question.  I’ve never really thought about this before.  I think I’d need to separate these two things first, creativity/creation, because the enemy of one is sometimes an ally to the other.  Take time and financial resources for example.  These will forever be the perpetual obstacles to creation and yet these same challenges can sometimes lead to creative and innovative new directions.  Creativity itself is less dependent on external factors.  Instead I see it more as a way of looking and responding to the world.  In a way, the only enemy to creativity might be one’s own unwillingness to both look and think themselves.

I have three kids which is both crazy and but also something I wouldn’t want to live without.