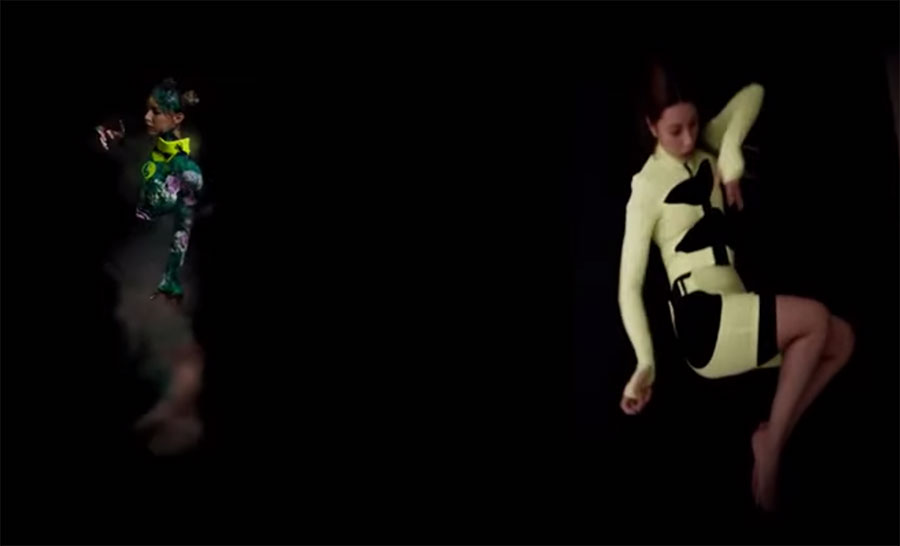 Global Quarantine started last month and by now an estimated quarter of the world population is living under lockdown due to the mass media accelerated virus pandemic. In this convergence momentum of infectious self-isolation of humans across the planet, 15 Online Performance Art festival exposes the condition of human bodies through a series of uncanny acts. As if customised for the quarantine, Sandra Bozic’s idea of her ‘online performance art’ invites performers to visually live stream various acts from all continents via a website in NYC. Online performing bodies become hypermediated across the oceans to be present in front of any Internet user in an instant. At the same time, they are clinically separated from one another as well as technologically distant to the participants. Live indeed but only through a web stream, intimate with webcams and screens, online art performances are acts sterilised by removal of their body forms away from the raw encounters with the performers’ physiology.

The first day witnessed many of the shows cancelled, postponed or replaced by the links to pre-recorded video uploads, what brought my particular attention to the precarious condition of the live stream and the novelty that arises from this challenge. The uncertainty of living became a figure of an environmental question during Janina Totzauer’s The Harvest at her rooftop in Munich. She distributed several vessels across its surface and approached them one by one, only to break them all and eat their mixed contents. They were her fruiting seeds, looking like charcoal, milk or synthetic material – suggesting futuristic forms of farming after a human catastrophe.

Mediating the catastrophic separation enforced by societal lockdown, London latex and leatherwear designer Nadia Murray moulded a skin cast of her torso and left it in a studio of her lover (performer Neo Fung), just before leaving the city for the quarantine. During his live Cannibal Skin stream, Fung abducted the hanging skin with obsessive hand gestures in search for obsolete flesh. He put the skin on his naked torso, incorporating the impression of Nadia’s sensitive tissue. The peeling off latex layer from the skin’s surface became a phantom gesture, evoking an impossible penetration of the absent lover’s body.

The view from Sandra Bozic’s balcony, trapped in a tight shaft in-between NYC skyscrapers, opened the second day of 15 OPAF. She was observing the morning birds passing far away over the modern city architecture. This vertical tunnel vision triggered longing for escape from urban lockdown. In order to avoid it, Carol Montealegre left the metropolitan area of Bogotá to spend her quarantine in the Colombian countryside. She connected her head with elastic to tree branches and performed a choreography of entanglement with vegetative life forms. Similarily, Sian Fan’s Conduit mapped her body movement with Xbox Kinetic sensor and connected it to a 3D avatar. Animating the digital puppet, she performed a confused choreography of entanglement with virtual computer environment – our vegetative existence during the quarantine.

Abstract animated visualisation of data initiated the series of storytelling performances during the third day of OPAF. Colourful and geometric, minimal patterns were generated by an open-source collective Illest Preacha from Montreal. They translated words of Canadian artist Rambler into avant-garde moving imagery. Two other live performances interpreted actions of storytelling in a more figurative way. Sobia Zaidi was reading a story about loneliness, her chair in the middle of an empty room facing a webcam. Somewhere indoors and alone in Lahore, Pakistan. Sobia interrupted the reading several time, each time to stand up and move the chair further and further away from the webcam. Each time becoming more distant and less available to the gaze of the Internet voyeurs. Looking directly into her webcam, Naples dancer Bianca Falco narrated a poetic story of a toxic waste disaster in her area of Italy. Her violent makeup simulated physiological reactions to soil contamination, such as hair loss and skin rashes. Her actions symbolised the process of decay, caused by environmental contamination.

The last day brought a variety of theatrical provocations. Jared Mimm mounted a phone camera on his face and walked out to the streets of Shanghai. He walked extensively and waved his hands towards the people passing by, who simply were moving away from him. His act playfully pointed at the social-distancing rules in the most populous city of the most populous country in the world. Other acts that day can be also perceived as indirect commentaries on social distancing. In a small American town, a self-isolated filmmaker Peter Max Lawrence performed a silent pantomime enactment of scenes from his imaginary movie “that will never get made”… Will the quarantine bodies make it out of the online deadlock?

15 OPAF happened just a fortnight ago in the outbreak of April 2020 and lasted for 4 days. Its schedule included 44 pieces in total, nevertheless only about a dozen of them were honestly streamed live. Considering the difficult conditions of tuning into and working within technological limitations of the actual live stream, I’ve examined only the selected few works that didn’t give into the comfort of pre-recorded “video-performance” edits but took a risk of the randomness of the presence in the very NOW. In my view, they abandoned some of the aesthetic control over the image for a very different value of facing the contemporary crisis of techno-plague tailor-cut for our self-surveillance society.