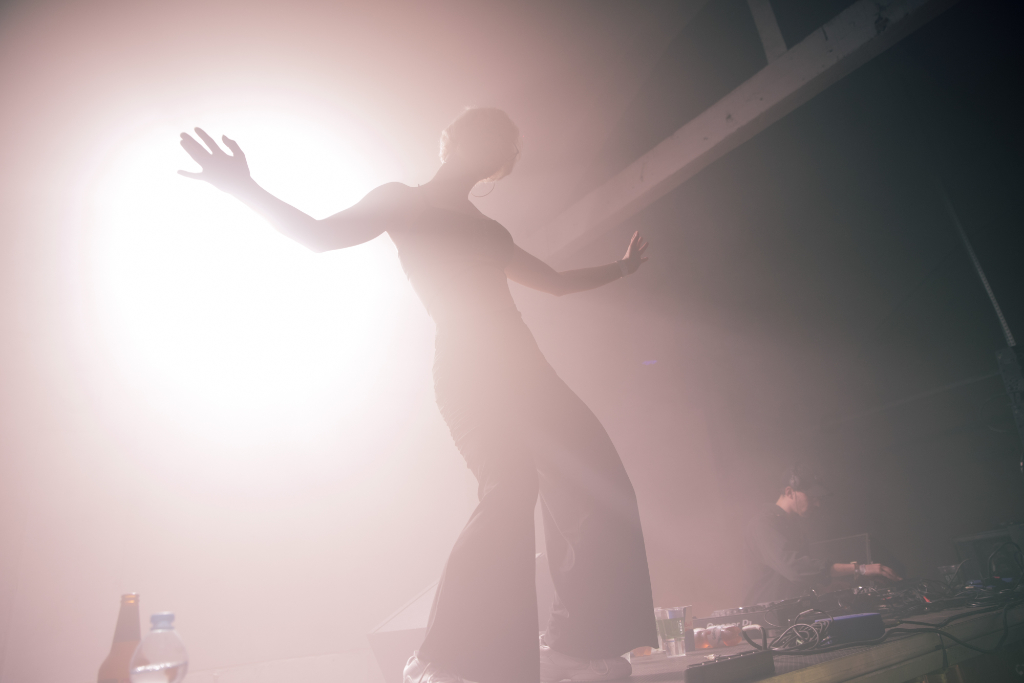 In 2018, it was the last time I travelled to Kraków without a Covid-19 passport on hand. Presence was the theme of Unsound Festival already back then. Today, I feel lucky I boarded on a plane or grateful to be finally allowed to enter my native land; suspicious and shaky, while entangled within the brand-new reality of Covid-19; uncertain and cynical, I could not doubt my physical presence more than now. So, with astonishing faces, ready for the festival’s rebirth, we gathered once more in Kraków at Krzysztofory Palace. Testing the unreliable grounds of the post-pandemic world; obliterating the old ideas of the real self, respectfully disobedient while crossing Covid-19 checkpoints and pretending to be somebody different; abandoning and acquiring new modes of existence, adapting to our being dispersed and distributed; were only some of the many motifs of Unsound 2021 that suggested dəəp authentic as the overarching theme.

Such a situation of being in simultaneity here and there, while at the same time experiencing the now with a slight delay, embodying the synthetic self that travels anywhere just by being aware, is nevertheless something that we have been familiar with for a long time ahead. However, contemporary digital technology does not seem to have solved the most basic human need yet. We are still striving to satisfy our carnal corporeality.

Only now, when we know how it feels to be forced to limit social life to digital proximity and what it means to be denied the most basic human freedom to be together with an unrelated being, can we start to make sense out of the hybridised humanity and it’s reality-based on dualism, division and difference. The problem is, though, that we are still desperately lacking in language to express the contemporary moment in words. Unsound’s press release suggested – Might an embrace of the inauthentic liberate us from the binds of dichotomies that no longer serve us?-. To second that, I wonder, what if the artificial and the inauthentic are the solutions to our reality’s crisis of agency?

After the rather extended season of distancing, having experienced Unsound 2020 entirely through the screen, it was bloody beautiful to share the floor with dancing bodies again. So long since I sensed a stranger’s skin next to me. It felt so fresh from participating in such a mixing of foreign breaths; some mouths very familiar, while some alien. We wore masks, obviously, but still, that did not make a difference. We managed to stumble across each other, exchange a kiss, and disappear once more amongst the crowd in the cavernous abyss of the Unsound’s total dose of audio-visual beguilement.

And breathe deep because breath is the bridge. John Doran opened the discussion series with such ease by talking to Matthew Ingram, author of Retreat: How The Counterculture Invented Wellness. Both of them, having experienced Covid-19, nonetheless looking pretty healthy face to face with the audience, praised breathing exercises over psychedelics’ bungee jumping.

Not only an invaluable help in recovery, be it coronavirus or alcoholism, breathing exercises also turned out to be a mesmerising artistic technique. Magic happened when the circular breathing practised by Bendik Giske turned his saxophone play into an act of snake charming done on human listeners. Becoming more-than-human, further exploring the constantly changing body, Flora Yin-Wong used her sonified breath to uncover this source of all pleasure and pain, to strip down this deforming and disintegrating physical imprisonment. Returning to her debut album Holy Palm, referring to Liturgy, her recently released book, she read out loud her verses on top of the amplified compositions and field recordings. At the same time, the dauntingly diverse audience squirmed on the floor, submerged under smog in a laser-cut red-lit room. Demonic was the beginning; it felt deep and different. But does it mean it was authentic?

Being famous for commissioning new works, adapting abandoned spaces, promoting international collaborations, or bringing together artists who never performed before, Unsound also showcased unconventional collective projects this year’s edition. It was warming to see the artists in Poland physically and exceptionally coming together on the festival’s stages.

For instance, Juliana Huxtable, Ziúr and Theresa Baumgartner performed OFF LICENSE for the second time, mainly after the project’s premiere in Berlin. Moreover, for the first time, MMM, a Berlin-based duo consisting of Errorsmith and Fiedel, presented their new show related to their unreleased yet album. Polish band Bastarda performed with Russian Jrpjej, having met each other only a day before the concert, something not usual in past festival editions, and despite that having admitted themselves that it had felt as if they had played together over the last 100 years.

Arrestingly, Eartheater appeared with another artist from PAN. Alongside Patrick Belaga, they were joined by Phoenix Ensemble, a group of Kraków’s classical musicians especially formed for this show. They all performed the pieces from Eartheater’s Phoenix: Flames Are Dew Upon My Skin. Following the flames, hellishly hot, her naked skin; right at the start of the show, the fire alarm went off. The confused crowd, together with baffled performers and their silent instruments, inside a big empty room of the Łaźnia Nowa Theatre, compliantly held back and while standing up straight, waiting for the noisy ventilators’ freeze to pass and let the silky sound to resurge. That could have been easily staged, indeed, but instead, it felt wonderfully authentic. Such a unique space emerged between the audience and the artists. Suspended, surprised, some possibly shocked, the crowd had a chance to become familiar with the artist’s authentic improvised self.

Transgressing the self; deconstructing authenticity and persona building, both in sound and in words. London-based artist Aya appeared at Unsound this year for the second time already. Having recently changed her name from LOFT and having just released her debut album im hole, which is a book too, the artist dragged her new work together with her new artistic self into the Forum Hotel’s famous Club 89, a red-lit festival dungeon with burning incense in the air. She metamorphosed and mutated, constantly changing her voice, her face, stripping down multiple dresses.

That exploded the idea of definability, testing transformation as the most authentic state of being. The performance constituted an indecipherable audio-visual image, the kind of contemporary queer that is alluring and wonderfully weird. From the beginning up until the end, it felt like a bewitching and bewildering play on chaotic contemporaneity, a situation when we lack words to name what we feel. The show removed all traces of any demarcations, exposing fragmented forms, featuring ideas and identities that are relentlessly disintegrating, dispersing while being distributed digitally. Welcoming loss, immersed in the productive void, such a messy space is charming and convincing. Perhaps, inhabiting the in-between is our only way towards a new reality populated by transforming hybrids?

Virtually for real, in revelation, we witnessed VR technology behind Sam Rolfe’s experiments. Presenting devices attached to his slim sculpted silhouette, with a magnetising smile and pink hair, such an irresistible elfin being, in simultaneity there and here, in the room and on the screen, to treat the virtual environment as the body felt free. Expanding awareness beyond materiality; projecting presence, while becoming one with multiplicities; reincarnated as a cosmic creature on the screen; again inhabiting the sticky space in between; that felt like futuristic Theatre of Cruelty, a theatre of the digitised double, which Antonin Artaud would applaud or reject outraged. They performed together with Danny L Harle, reanimating his ecstatic debut album Harlecore while breathing life into the VR puppet world of Sam Rolfes and his team. The dance floor turned into a cosmic rave immediately. Entranced by visual projections, with the body intoxicated by hammering rhythms, paying no more attention to the physical wellbeing, the aroused crowd immersed in this augmented reality’s purgatorial space and performed a synthetic slam dance as if all in an out-of-body experience. Flesh and bones were carelessly bumping against each other; moving so uncontrollably, but still swaying in sync; to feel like a tiny particle amongst multiple figures; a poor petty part of a rowdy organism; was what underlined the essence that lies in mutual influence, creating collectively and cultivating coexistence. To be affected by the artificial and the computed, but when it is your blue bruises that remind you about it, the experience, instead of being hyperreal or hybrid, has made us realise that we are still predominantly the body.

Unfortunately, I missed two last days of the festival’s fever. I could not be there for Kenric Allado McDowell’s creative writing with AI, or Annea Lockwood’s Piano Burning piece, with Martyna Zakrzewska performing Chopin on the piano complete in flames, as I took a 6 am train to be on time at the National Philharmonic in Warsaw instead.

At the same time as Unsound this year, its grandeur quinquennial event was happening in the capital in parallel. When I finally got to Warsaw Chopin Airport directly from both of the festivals coinciding, this whole hybrid experience felt absurdly authentic.