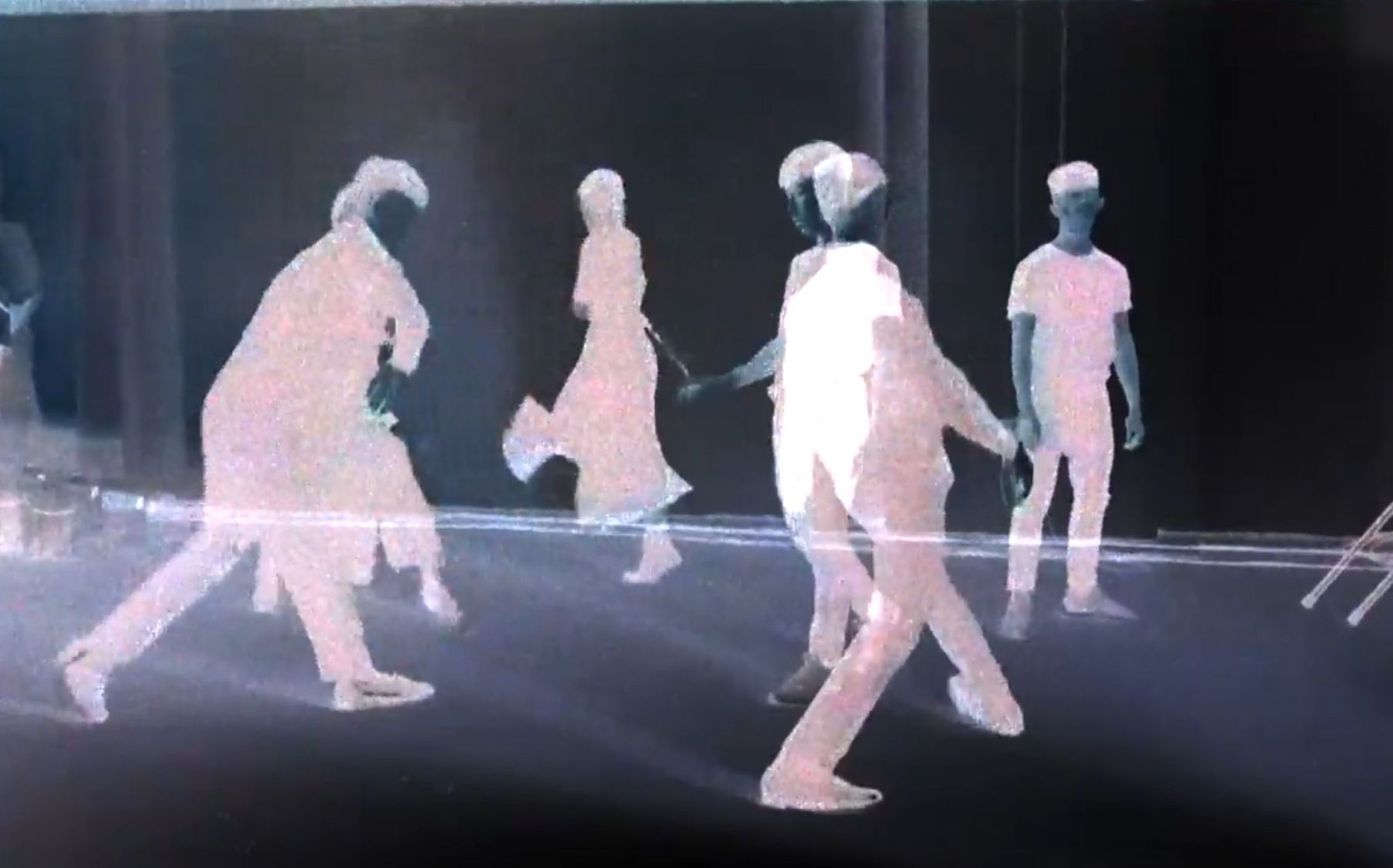 To drive​ is not just to be at the wheel of a car, helm of a ship, conductor- or directorship, but also the inner force that compels and orients us towards certain activities. This renders the idiosyncrasies of thinking, living, being that just about holds together. Could we also call this a style, by which I mean a manner (rather than decorum or pretence)? == If it rings true, then what I humbly hope to sketch out below happens somewhere between ​motivation​ and ​manner​: the way in which the group ​Tutto Questo Sentire​ and their series ​Exercises on Displacement​ have, for me, come to be identified.

The group regularly assembles and disbands, for it takes as its origin a particular artistic seed: the residency. Should I permit myself to extend this metaphor, such a seed sets in motion an organic growth, one which sees to the many possible bifurcations of activity that the group has undertaken together. The most important thing a residency can do is to be a harbinger of collaborative work which privileges intuition​ and ​feeling​, Olivia, Sandro, and Rebecca explain. Its technical properties, such as the fact it is a gathering that often takes place in its own space on its own terms, means that displacement can behave as a disruptive force that prevents a practice from continuing as it has done.

In the peach hue of Italian dusk was this elsewhere-elsewhen == Outside the comfort zone, the freedom to trial new things is made possible by a disentanglement from repetitious safety nets, ​gravitas​, or habits of thought. Somewhere between formation and formlessness is the node which gives way to nomadism. Done right, the residency is a period of close-knit contact, participation and attention, but also one with a certain porosity, which allows the unexpected, the unpredictable and previous moments of spontaneity to breeze on through. Done right, it is permission for pause, failure, slippage == features essential to, if not the very definition of, ​experimentation​.

I see a certain musicianship pervading the early workings of TQS, a prioritisation of ways of work common to musicians which seems fascinatingly adaptable to other forms of creative practice. The event of the “jam” and it’s wild, free-wheeling, instinct-driven quality perfectly describes what they had come to term as this residency. To speak of the “jam” is to speak inexactly of an undocumentable “magic” unfurling — ephemeral and effervescent, as light as ash or dew — that can come to exist between artists. How can it be that the entwinement of passion and collaboration, which allows artists to exist and co-exist sustainably, has been very nearly forgotten in contemporaneity?

The number of residencies desperate to artificially eke out “collaboration and collectivity” — the hottest of artistic buzzwords — is ​staggering.​ Milked and spent, their willing participants are discarded like used tissues. Or, in best-case scenarios, they transact social currency, the mutual gains from which they (with each party reasonably satisfied) agree to designate their relationship as a “collaboration”. Time, money, “exposure” — a flashbulb goes, painted in stars, you must stagger to recover — are things we have learned to haggle for in compensatory terms.

And such are the self-interested lexicons which often taint, exploit and curtail what begins as earnest artistic contact. Now, more than ever, the jaded artist is a well-frequented category, so much so that it’s operant at the level of fashionable ​cliché​! These are adverse conditions for artists, and the question is as urgent as our circumstances are plain == we are presently struggling through a period of voicelessness, anonymity, estrangement and loneliness which plagues contemporary artistic endeavour ​and sociality at large.​ Casting this in high-definition relief is TQS’ emphasis on an eclipsed aspect of creative work: play, and further to this, interplay. In spatialised terms, the group speaks of making room for themselves, carving out places for their values == ensuring a testbed for investigation, negotiation, and the familial support to do so.

Take, for instance: to Rebecca, ​empathy​ is not just a shorthand for relating to someone, a cause, or sharing experiences. Rather it issues forth a set of problematics with regard to mutuality; in her work, the “why” and the “how” a filmmaker might be drawn to filming in proximity (in both literal and metaphorical understandings). The intimacy of the zoom lens never quite reaches your skin. It is a task at the threshold whence the cinematographic technique crosses/spills/stumbles (however) clumsily over into affect — body — ​emotion​.

What might this tell us about her, the artist, of her subjects, and what film can achieve when, without didacticism, it manages to reach the viewer’s inner sanctum who is more accustomed to simple film tropes like action or speed? But this thought is duly chased out by the sultry din of Will Guthrie’s drum work, like a natural transition, the end of one chapter readying to introduce another…

I am momentarily dressed in a spray of metallic, tinsel curtain, as I make my way through the zones of a room at South London Gallery. I always welcome the displacing that audiences experience at every one of the​Exercises on Displacement,​ which are programmed to move from site to site, and within the sites themselves. A ​ritornello​ approximately translates to English as a “refrain” == it is a technical musical term for a repeated segment, and this despite, it is one that never sounds quite like the last. Music may be likened to the spring flowers which unfurl season after season, whose true promise is repetition with a difference == reliably never the same. Time and experience continue to mobilise the collective in new and unexpected ways which, after ​five consecutive years of residency​, lead to a curatorial extension of their activities. Like this, TQS had now become the chimeric creature artist-curator-facilitator.

By this time, there was already a motley wellspring of humdrum and affiliates accrued during the residency periods, which would populate TQS’ event series ​Exercises on Displacement (2018-2019)​. While the program would front their London debut and help to share their activities, moreover, it was a means of articulating the backbone of strong alliances forged over years of friendship and conversation. Performance artist George Ramsay points out that the collective appropriates the best parts of Italian culture for this site of seamless work-play == the re-grouping around mealtimes is an apparatus comparable to any other form of organisation, or polished outcome. What takes place around the table is the loose tracing of ideas, unravelling, coalescing, crystallising… or just leftover in patient wait for another day.

Anyone that has been involved in truly collaborative projects will understand the funny self-displacing nature of opting in: a special shared ​ext​imacy that can be anxiously liminal insofar as it’s not recognisably oneself, and yet not entirely just the other. It is said that the mirror is sinister, much like copulation, because it doubles the people with its reflection. The individual-group mechanism is a feedback loop that doubling quality in exchange takes one beyond stasis == ​ekstasis.​ Jan Hendrickse explains collaborative work as a displacement from one’s insular, isolated practice. Collaboration is the granting of an opportunity to be moved by others, and through/with/in other disciplines.

In the ​Exercises on Displacement​ events held to date, we’ve seen photographer Nhu Xuan staging her first performance piece, soaked in ​purples​, bringing liveness to the set she would ordinarily work with to create still images. In an early instalment at Cafe OTO, composers Sandro, Simon and Jan performed their sonic meditation on Deleuze-Guattarian materialism in their piece ​Felt,​ brandishing a slew of recognisable and invented instruments, one with a snakeskin belly which produces a visceral, crooked gasp of a sound when scratched. And, on other occasions, such as the very last at Camden Art Centre’s off-site location, we have been graced by spell-binding opera singer Olivia Salvadori.

She had once spoken to me animatedly about haptic transference, one made possible through every single stretched syllable, chords quivering, reverberating == And all this to illustrate that ​Tutto Questo Sentire​’s inaugural series ​Exercises on Displacement​ has been nothing short of a pleasure-filled, mixed-bag of disciplinary synaesthesia. This is not simply a light primer, or appetite-whetting ​aperitivo​, for the inherently political matter that is TQS’s continued collective interest on the notion of displacement.

Take this, ​them,​ as an exemplary reinvigoration of radical, co-operative, interdisciplinary work, as well as a keep safe from the transaction / value-based incentives which painfully atomise artists == forget what you thought you knew and liked about “art”. TQS reminds me of what inexhaustible ​delight​ there is about the imbricated terrains of care, art and play; the crossing of fields that open onto a renewed and revitalised creative landscape. They need no manifesto and state no clear intentions, except to embody their dedication to collectivity through the hospitality of their ethics of work, that is, what the practice of TQS invites. If now is the moment to reflect on the past and look to the future, the generosity of the work and that of their peers is fruitfully carried through by their namesake ​Tutto Questo Sentire​ == “all the feeling”.

*Elaine Tam is a writer and curator who regularly collaborates with artists to create forums for critical engagement through exhibitions, talks and writing. Her practice is an interdisciplinary site for play, pleasure, gesture, enquiry, even failure. Her research interests include poetic perversion, regimes of femininity, the untranslatable, and encounters with radical Otherness.