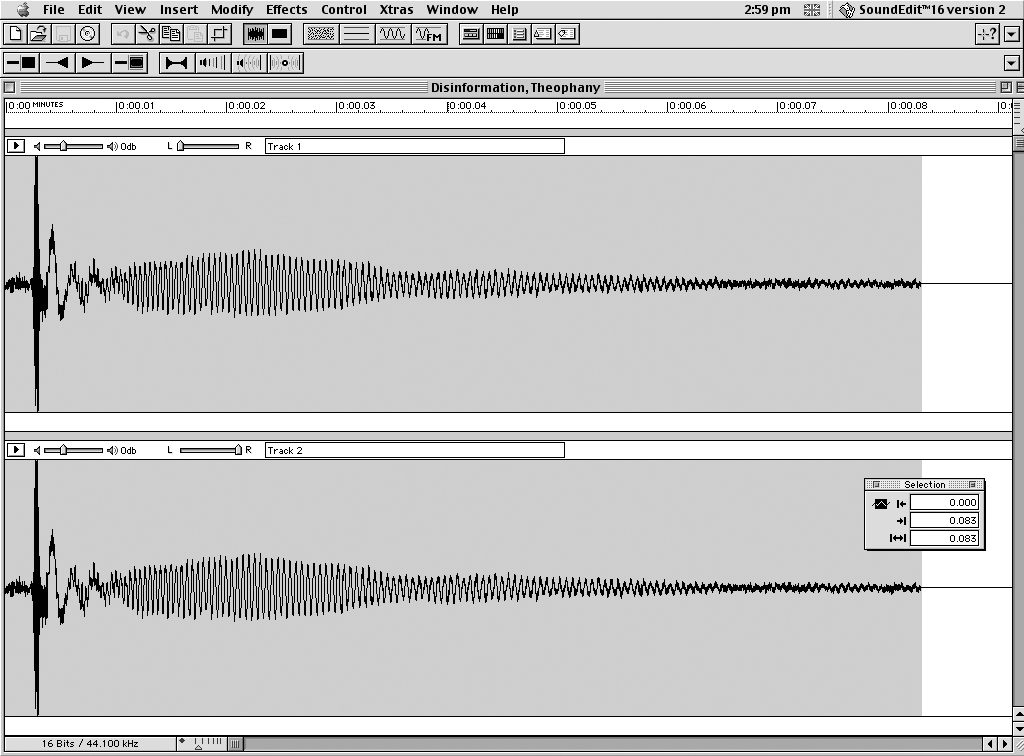 The Theophany sound installation by artist project Disinformation is a work of electromagnetic sound art, and in fact the shortest sound installation in the world. This work is an affectionate parody of the (much longer) composition of the same name by the “Holy Minimalist” composer Sir John Tavener. “The voice of the Lord speaks with flashes of lightning” (Psalms 29:7), and, in theological language, the term Theophany refers to “manifestations of the divine”, which take the form of lightning strikes, cloud formations, thunder and earthquakes. In John Tavener’s composition, the voice of God is represented by the basso profundo singing of operatic performer Jeremy Birchall, which John Tavener pitched-shifted down to extreme bass frequencies using reel-to-reel analogue tape technology [1].

The Bible asserts that “God created man in his own image” (Genesis 1:27) however it is self-evidently man that created God in his own image, and, in marked contrast to Tavener’s anthropomorphic projections, the Disinformation track Theophany conceives manifestations of the divine in disconcertingly literal terms. The Disinformation artwork represents what’s offered as the “real” voice of God with low-frequency radio recordings of electromagnetic noise, directly radiated by lightning strikes in electrical storms.

The first commercially published iteration of Theophany is a 4:30 minute track released on an extraordinary sonic arts compilation called A Fault in the Nothing, published on double CD by the highly innovative record label Ash International in March 1996 [2] (the CDs also feature artists such as Chris Watson, Graham Lewis, from the band Wire, and Ryoji Ikeda). The second is a 17:00 minute version released on the B-side of the Disinformation “Stargate” LP in August 1996 [3]. These recordings were exhibited as sonic art installations in the subterranean chapel of the underground nuclear warfare command centre near Anstruther, Fife, Scotland, in September 1998 [4], and in the radio room of the Arctic Corsair museum ship, for Hull Time Based Arts, in October 1999 [5].

The version of Theophany in focus here, however, was edited down from Very Low Frequency (so-called VLF-band) radio recordings of lightning strikes bouncing around the earth-ionosphere waveguide and ricocheting along geomagnetic field lines in space. The story of how these recordings came to be made is a subject we’ll return to in future – involving ground observations for the Istochnik-Ariel “virtual” laser antenna experiment on board Space Station MIR [6]. For now, it’s enough to say that it’s the VLF recordings of lightning that formed the basis of the next Theophany sound installation.

At the invitation of former Victoria & Albert Museum curator Susan McCormack, on the 3rd of November 2000, Disinformation exhibited in the darkened Raphael Cartoon Room at London’s V&A. Theophany was edited down to a recording of the single electron-packet released by one tropical lightning strike, echoing out through the cavernous space of the Raphael Cartoon Room once every 60 seconds. At a whopping 0.083 seconds duration, this now definitive version of Theophany was (and almost certainly remains) the world’s shortest sound installation; and, as you can see from the waveform, the primary strike is even shorter, with the major energy burst measuring 0.7 milliseconds (see waveform above) [7]. In respect of both their temporal and theological aspects, there are significant similarities between Theophany and the One Second Drawings and Least Event conceived by the artist John Latham [8].

As an auditory object, selected and removed from a longer electromagnetic field recording, Theophanyis no less an artistic “readymade” or “found object” than, eg – a pebble selected from a beach by an artist like Paul Nash. The decision to present Theophany in this way was however inspired by a chance encounter in Tooting a few months before the V&A project. Walking into a run-down house clearance store, I was deafened by one of nature’s great sound artists – a mynah bird – blasting out, from a cage, a single, abrupt, incredibly loud musical note, once roughly every 30 seconds. The actual sound of Theophany is a liquid “clonk”, which resembles the sharp report of the Hyōshigi (wood clappers) used in Japanese Kabuki and Noh Theatre, and also in Japanese night-watch and fire safety patrols [9].

This definitive version of Theophanyhas now been exhibited 15 times – from the premiere at the V&A, to the first Disinformation solo exhibition at Fabrica Gallery, Brighton, 2001, through to the Passengers Offsite exhibition at Sluice HQ, London, 2018. Theophany can be heard 55 seconds into video documentation of the Fabrica exhibition [10] and 19:00 minutes into a Disinformation radio feature broadcast by Resonance FM [11]. In 2020, Theophany was described as a “little masterpiece” by Jonathan Watkins, director of Birmingham’s Ikon Gallery [12].

While most electronic artists seem preoccupied with seeming “contemporary”, the Disinformation artworks “The Analysis of Beauty” and “The Origin of Painting” invoke concepts from 1753 – from the artist William Hogarth, and 1782 – from the painter Joseph Wright (“Wright of Derby”). The “Spellbound” video employs one single extremely slow optical cross-fade, while the “Ammonite” video invokes a “Devonian” geological timescale, of between 60 and 400 million years. Early Disinformation texts discuss electromagnetic sound art in relation to astroarchaeology, the “echo” of the Big Bang, and the “electrical ignition of the Primordial Soup” [13], while “The Act of Creation” light artwork speaks for itself [14]. In this way, Disinformation is an art project which uses electricity, language and even TIME itself as both a subject and as an artistic medium.

“Art is not necessarily science, but science is always art” [15], and a striking illustration of this principle is the scene in a documentary by Nicolas Philibert, in which a woman fires a GUN in the Musée du Louvre [16]. This gesture can easily be seen as a work of extreme performance art. In fact, the gun is a blank firing pistol, and a technician is seen noting what are almost certainly acoustic reverberation times on an old-fashioned paper chart recorder. Although it’s not explained in the documentary, the architectural acoustics of highly resonant exhibition spaces, cause long reverberation times, which, in psychoacoustic terms, can seriously degrade the intelligibility of audible speech. To quote the designer Eric Li “museums themselves are works of art” [17], and, while such phenomena help explain the unique atmospheres experienced in these contexts, in terms of professional museology, they’re also critical to visitor safety, as long reverberation times can compromise the intelligibility of emergency fire safety and evacuation announcements.

So, in this context, a gun is used to produce a loud impulse noise, of such short duration that the sound doesn’t overlap with the echoes and reverberations it produces (the same effect can be achieved by taking a needle to a giant balloon). These reverberations are recorded, and, in more up-to-date fire safety practice, mathematical “convolution” techniques are applied in software, to impose these reverberations onto samples of pre-recorded speech, to model the effects of the museum’s acoustics on the intelligibility of announcements. Similarly, the Theophany sound installation also produces abrupt (though much more musical) impulses, using characteristics of time to explore and to articulate the experiential dynamics of acoustically “live” exhibition space.

Writing in The Guardian newspaper, the design critic John L. Walters described how “many (sound) art installations seem pretty lame”, stating however that “there are sound artists… who can successfully sculpt sound in a difficult gallery acoustic”, and I’m pleased to say that John Walters cites my work as an example [18]. For the sake of balance, however, Vital Weekly (music bulletin) also described the earliest Theophany experiment… as sounding “like the end of a record being slowly ground up by a blunt spike”. Convolution techniques have also been used to compose durational ambient music for the Disinformation project [19].

* Joe Banks is an electronic music producer, researcher and installation artist, who performs and exhibits under the aegis of the brand name Disinformation. Disinformation artworks are primarily concerned with electricity, communications and language, having a special focus on electromagnetic sound art and on audio-visual illusions. Aesthetica Magazine described Disinformation artworks as “mesmerising”, as “hypnotic and captivating”, and as “sublime”.