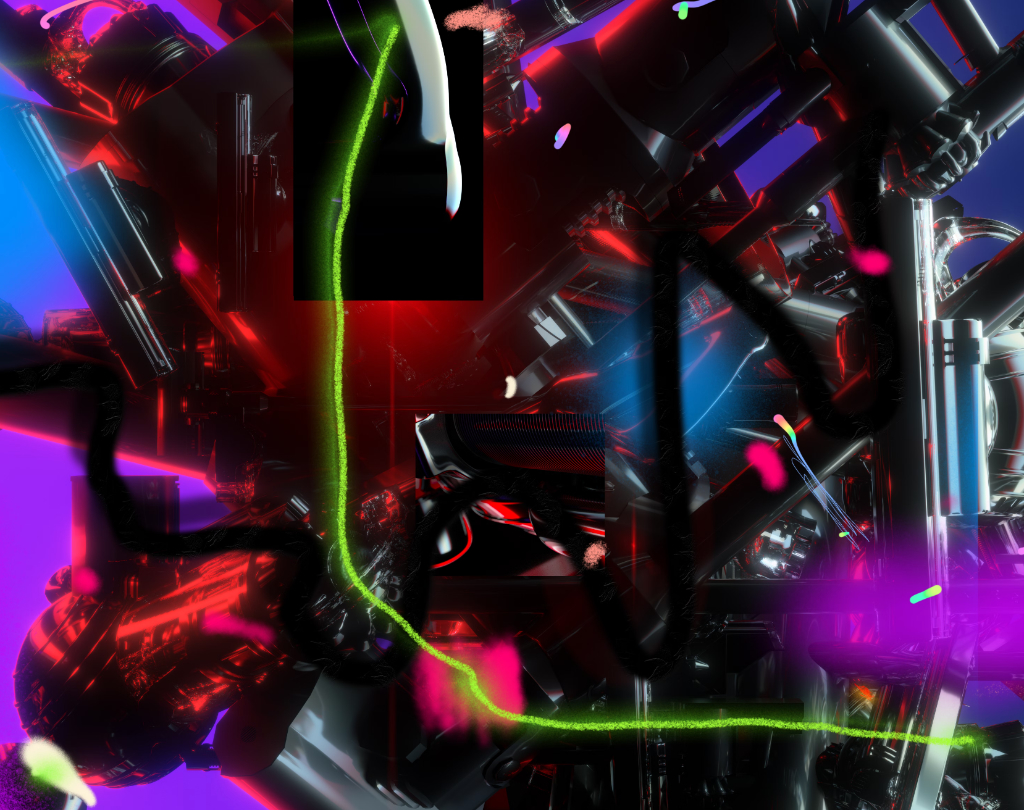 Jimmy Edgar is an artist from Detroit, Michigan, known mainly for his musical work, located somewhere between techno, hip hop and glitch, under which he has developed work from 2004 to date, publishing on labels such as Warp, Ultramajic and Innovative Leisure, in addition to contributing as a producer to the work of other artists and working as a video artist and photographer.

These disciplines have led him to consolidate a visual work that has found its niche in the blockchain, where it has been growing rapidly in recent months as a result of several NFT conceptual art drops where Edgar exposes his most abstract, surreal and metaphysical facet, developing not only an exciting reflection on colour, shape and space but also a reliable critical and conceptual process.

As he told in an interview with fellow artist Pilar Zeta at Foundation NFT store and community, his visual process is very detailed and meticulous, yet opening space for intuition: I usually start with one main object, archetype, or symbol—and from there I start to research available 3D objects and symbols to accompany that main idea. After this, he draws on an iPad and creates the 2D sketches, which will function as geometrical guidelines for the 3D image, which then gets animated, moved around and edited, all this in relationship with the conceptual, symbolic and aesthetic guidelines defined earlier.

Art is obsolete now. New technologies are taking control, reaffirms Edgar quoting the neo-pop artist Jeff Koons regarding one of the first works to enter the blockchain under the name of JIMMY, called OBSOLETE [1] and conceived as an installation concept that is made up of sculptures based on Dyson vacuum cleaners, hermetically sealed in acrylic, intended as a dialogue [2] with Koons and his work The New exhibited at The New Museum in New York in 1980 and also achieved from a sculptural process with vacuum cleaners.

That is why Edgar follows the direct conceptual line of Koons both in the concept of his artworks and the criticism of commercial and advertising culture that crypto-native art can be powerful for. So, for example, with a Dyson vacuum cleaner assumed as a symbol of mature responsibilities and the ultimate ends of life,  considering the technological connotations of cordless and automatic vacuum cleaners as a way of representing what advances like web3 and blockchain mean nowadays. This idea would continue in another piece called OBSOLESCENCE, and his concept of digital readymade would acquire more force in his work in later months.

OBSOLESCENCE was followed by more NFT pieces like MIRROZ, which was exhibited at Miami Art Basel in the digital crypto art gallery SuperRare’s Monolith. The exhibition consisted of a huge digital canvas placed in the fair to exhibit NFT art on a large scale. The work, minted (integrated into the blockchain) and transferred to SuperRarestore [3] in 2021, shows several rotating virtual mirrors in which endless gradients, lights and colours are projected that bounce off each other in a 3D sequence. This creative pattern would maintain in later works such as PLUSH [4] and more recently in the convulsive HYPERCOLOR [5].

Shortly after his collection on obsolescence, Edgar published another called MATERIAL [6], made up of five pieces in which a metaphysical and reflection can already be glimpsed that will gain strength in his subsequent works. MATERIAL is described by the artist as “a collection on mental transmutation related to the phases of matter”, integrating works such as CHANGE MATERIAL and BECOME LIQUID, which alludes to the variations of being between solid and liquid, rigid and flexible, changing and fixed, all between the third and fourth dimensions.

Edgar continued to explore ideas of light and digital form in works such as DOWN ONLY, YEE and OPTIONZ, the latter integrating a custom code-based generative system to create variations of 12 digitally generated images, which were further processed into a collection of 100 that is for sale at Open Sea [7]. According to the artist, in OPTIONZ, he sought to feel what it was like to create things that he had never seen, inspired by artists such as Damien Hirst and, again, Jeff Koons, as he tells Zora:

I loved the process of doing it because it was like I was programming software to make something that was mine. It felt like it was creating things that I would have never seen before but using my same elements. I always loved how Damien Hirst and Jeff Koons were able to delegate their work to other artists. In this project, I can delegate my work to a computer.

This generative process would be consummated in one of his most recent and vast collections, called OBJECTZ [8], in which the artist’s concepts of matter, time and space are also consolidated, while the collection integrates metaphysical ideas that had already been accentuated in pieces like OBZERVVVER, made up of 3D and sound, and which, as he says, is all dedicated to quantum physics and how this theory implies that the observer affects the observed reality, leading to a dreamlike vision of the intermediate spaces of the digital generation, related equally with his search for random thoughts represented in HEAD IN THOUGHTS [9].

OBJECTZ comes to condense this idea of ​​virtual spaces and reasurreal dymades of imaginary places, impossible in everyday physical reality but possible at some point in the quantum universe, here facilitated by the digital dimension, programming languages, and software-based modelling and retouching techniques, methods under which Edgar develops a audiovisual alchemy of the metaverse.

Influenced by the sculptural work of the Argentine artist Pilar Zeta —for whom he composed sound in her work Hall of Visions—Edgar undertakes in OBJECTZ an algorithmic search for objects, spaces and relationships based on generative patterns that unfold in his situations to create different scenarios that are composed under coordinates established by their beliefs and metaphysical positions, where restless figures appear in desert spaces that sample Zeta’s work while generating their worlds. I love when people sample my music and steal my sounds to get inspired, Edgar says that’s part of what conceptual art is, and it relates a lot to my work appropriating images.

OBJECTZ allows the artist to consolidate himself within blockchain art. It is a collection minted on his site and contains a conceptual depth that manages to bring together several of JIMMY’s creative impulses. After that one, Vellum LA on Melrose Avenue in Los Angeles, California, was the place for his first solo exhibition [10], where all the processes and ideas from his previous collection were refined and presented integrally, giving particular importance to JIMMY’s exploration of materiality and immateriality in the virtual domain.

With 13 new works curated by Alice Scope and Sinziana Velinescu, OXYGEN [11] aims to portray ideas as evaporated forms of physical creations and how they might materialise into reality, a process the artist coins as digital condensation,  to refer to the aforementioned digital alchemy in which the imagination getting solidified as literal objects, as shown in the series in forms of digital epoxy, hand dryers, beach balls and other complex physical processes, such as in the piece OXIDIZE, the main work in the exhibit where two vibrating frames reflect on breathing, energy, life and death.

All these works are not precisely critically or directly considering the actual processes behind the blockchains, though, which would be interesting to explore and put on the table since behind these metaphysical condensations of a crypto art that goes into a virtual alchemy, there are actual fossil, organic and environmental events triggered by the blockchain in the whole process of the minting of artworks, the latter considered secondary to the artist, who says that what’s important is the actual token because it’s unique, ideally can’t be changed. So it’s got that immutable function to it.

Now, this immutability and uniqueness of the virtual work of art justify the environmental consequences that the blockchain brings or could it be otherwise? To the sequence of materials involved in this virtual alchemy, adding a series of organic processes involved in digital processes, a direct, irremediable and material consequence of the virtual metaphor would be necessary.

Although it is an open discussion of the crypto scene in general, it would not be fair to locate it in a single artist, as in the case of JIMMY, which is connected to this reality. However, I do understand the inefficiencies with some blockchain technologies, so I think it’s important to offset my transactions on Ethereum. It’s a win/win situation, he told Zora, talking about his strategies to compensate for the impact of the blockchain, such as in the aforementioned OBJECTZ collection, which he wanted to be carbon negative, seeking to offset the carbon footprint of the energy use of the Ethereum network —where Edgar’s non-fungibles have been minted—, with the burning of credits to invest in reforestation processes in the Amazon.

These types of sustainable strategies seek to mitigate the impact that some blockchains have on the environment; also, with the so-called Ethereum 2.0 and the replacement of mining-based strategy, plus the advent of alternative blockchains that implement other strategies to mint tokens, the environmental impact and geological implications of the blockchain are supposed to be drastically reduced in the upcoming years. Maybe all that will allow crypto-art and its novel ideas of digital soberainity, immutability, decentralisation and new forms of commercialisation to find its place in nowadays art landscape because artworks can not be that cool if, behind their tokenisation, there’s the heavy aftermath of the blockchain’s heat.