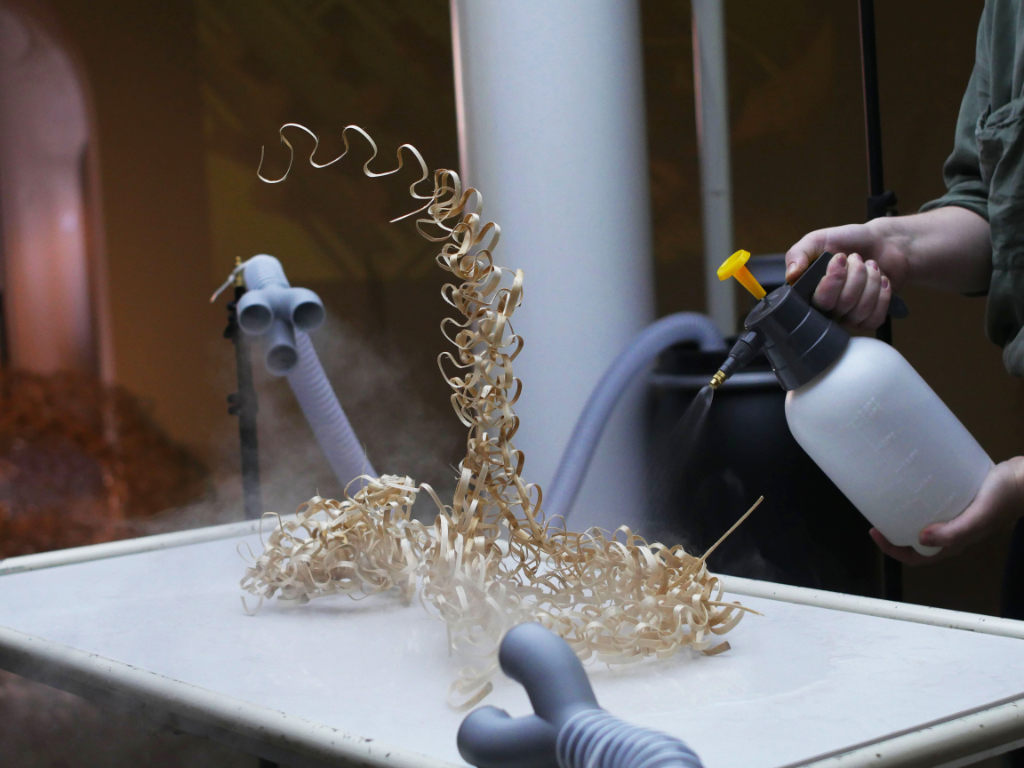 We are our environment [1]. This short phrase opens up the full dimension of the multi-layered tensions between humans and the material environment, to which the exhibition Stretching Materialities is dedicated. Located at the Veterinary Anatomy Theater of the Humboldt University of Berlin, the project aims to make the activity of matter, which normally eludes our perception, tangible by means of the exhibition.

For this purpose, the project group OBJECT SPACE AGENCY has taken a closer look at the Geomorphological-Geological Collection of the Humboldt University of Berlin and analysed the activity of its stones and minerals. But, while investigating their agential materiality, the exhibition also questions the ambivalent relations between the objects and how contemporary conservatory practice deals with them. Instead of isolating active matter behind glass, which suppresses material dynamics, the exhibition aims to expose these material activities. Consequently, it becomes ever-more apparent to the visitor that even so-called inanimate matter such as stones are not immutable objects but engage in a constant morphological process.

This brings to mind a quote Henri Lefebvre remarked in his 1992 publication Rhythmanalysis. Space-Time and Everyday Life: Nothing is motionless in the eyes of the rhythmanalyst. He hears wind, rain, thunderstorms. In observing a pebble, a wall, or a tree, he perceives the slowness of movements of these objects. Their movement is slow only in proportion to our time, our bodies, our rhythms. The realisation that all matter is constantly in motion, influencing our bodies, penetrating them, and being influenced by our presence inevitably brings about a rethinking of conventional human-environment relationships.

What new forms of coexistence between human and non-human actants can be derived from this? And how can interdisciplinary endeavours from art, design and science contribute to making those new forms of conviviality aesthetically tangible? These questions appear as a starting point to this alternative exhibition experience, in which the visitors’ transition from mere observers into actors in the autopoietic system of the exhibition.


One of Berlin’s oldest educational buildings, the early classical theater with its copper dome, immediately catches my eye as I enter the courtyard. Inside, the show is introduced with a room dominated by a diverse range of old and heavy glass vitrines. The stones and minerals from the collection create the impression of being in a natural history museum. However, this institutional vibe is interrupted once my attention wanders to the margins of the room. Here, on the side of a vitrine, stands an inconspicuous cart with a variety of objects on it. This arrangement looks like someone took them out for research and makes me feel like I’ve entered the room just after a busy scientist hurried away from the scene. In another showcase, the hermetic sealing of the exhibits behind glass is interrupted by a box with two holes that allow me to reach inside, offering to stroke a soft miniature pebble beach. Yet in another corner of the room stands a rack with Korean Hanbok coats. Once wrapped in the loose mantle, the visitor’s bodily self-perception becomes transformed. Technological applications on the Haptic Hanbok allow for a unique sensory expansion. Now, the coat bearer can experience living tissue on their own body, which can otherwise only be observed through a microscope. The Hanbok itself refers to the traditional Korean understanding of the human body as a microcosm [2].

But just like our bodies, the stone walls of the adjacent rotunda are also made of active material and thus let the whole exhibition space appear as one dynamic structure. In the center of the rotunda, Clemens Winkler has set up a cloud simulator. The weather phenomenon hovers below the ceiling as a ghostly apparition. Although the appearance of the cloud is captivating in itself, Winkler sees much more in the exhibition than the presentation of his work. In a departure from the convention of the finished and untouchable exhibit, the project group members have taken seriously what it means to allow non-human actants to get involved. In fact, it might mean to practice what the design researcher describes as letting go as contemporary way of designing.  Instead of bringing in a finished work into a defined curatorial frame, he spent the last months gradually setting up his installation.

This process made it possible for him to gather knowledge about the characteristics of the indoor climate and to capture data about how the cloud affects other actants in the room and vice versa. The surrounding walls, for example, are directly affected by the moisture in the cloud and its particles. For this particular reason, exhibitions tend to require a lot of maintenance work. But here, the different materialities in the space are left to inform and deform each other constantly. This effect can be seen, for instance, in a funnel-shaped woven willow structure by architect Natalija Miodragović that has collapsed throughout the exhibition due to the humidity in the cloud installation. The presence of the visitors’ bodies in the space immediately enters the chemistry of the cloud on a micro-level. If the moisture in the cloud triggers a weathering process in a stone, does the visitor* become part of that weathering, or even the stone itself? asks Winkler.

I am stepping onto the round platform of the cloud simulator. Inside, I realise that I am now standing where, two centuries ago, the carcasses of sick horses were brought from the taxidermy room up to the second floor auditorium on a round lift table. Back then, people applied horsepower to many facets of everyday life. As a result of their significant systemic relevance, sick animals were often dissected by scientists to learn about an invisible threat: the viral cattle plague. With Stretching Materialities*, the space again turns into a laboratory for studying invisible phenomena. Consequently, the rotunda works as a portal, allowing visitors to travel into different intangible dimensions: into the micro-level activities of matter, from the present moment into the history of the theater and finally into a virtual reality environment created by the exhibition’s VR infrastructure team.

In this virtual dimension, the rotunda takes the shape of an elevator. Although the environment feels radically altered, it is not completely detached and works as a superimposition of reality. Some structural elements, such as the columns around the elevator, serve as an interface between the virtual and analog spheres, assisting with orientation. As I enter the VR environment, my body dematerialises and gives way to a completely new self-experience determined by the rules of this virtual reality. Suddenly, all of my abilities and the effects of my actions are crying out to be checked and re-learned. In this uncertain terrain, I feel reassured as I notice that navigating between different floors works simply by pressing the elevators’ virtual buttons. In one of the scenarios, this palpation of a world that is invisible from the outside takes on a further level of meaning. As I looked down, my hand had turned into a fine scalpel steering, in oscillating movements, through a heap of body tissue.

This Virtual Sensing Knife by macromolecular physicist Mohammed Fardin Gholami could in the future help surgeons to detect diseased cells in the brain, as on this small scale, tissue can grow back together immediately when separated. The diseased cells change their consistency, which is felt through the increased resistance on the knife. Yet, the experimental project metaphorically points to the ambivalences of scientific work itself: by literally tapping in the darkness of the brain, one feels one’s way to new findings. However, the perception of this phenomenon only becomes possible through the tool, which accentuates the apparatus’s powerful agency.

In the case of Stretching Materialities, the exhibition itself can therefore be seen as an apparatus that makes the relations between discursive practices and material phenomena [3] apparent in fascinating new ways.

[1]  Exempt from the website of the Excellence Cluster “Matters of Activity”. https://www.matters-of-activity.de/de/research/projects/124/object-space-agency
[2]  Exempt from the exhibition leaflet.
[3] See Barad, K. M. (2007). Meeting the universe halfway: quantum physics and the entanglement of matter and meaning. Durham: Duke University Press.

(Pictures courtesy of the photographers)
*Stretching Materialities was open from 16.9.2021 to 4.3.2022 at Berlin’s Veterinary Anatomy Theater. You can still take the virtual TAT-Tour via https://tieranatomisches-theater.de/ta_tour/ or view the 360° tour  via: https://www.youtube.com/watch?v=4D9aUUskGuE