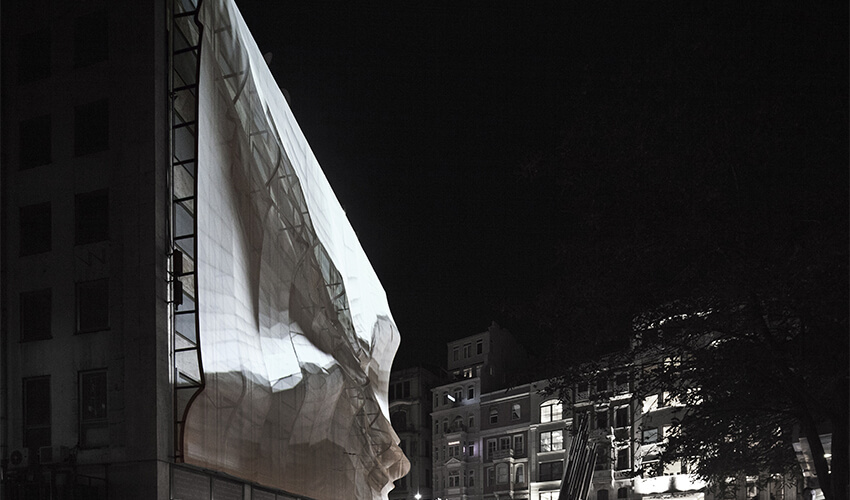 Architects are becoming more and more aware of the presence of technology-mediated cities. Alper Derinboğaz observed during his master’s program at UCLA in California: California is a very optimistic state; I mean think about all the multiple technologies coming out and changing the world in a way. Also, there is an optimistic lifestyle and a curiosity for newness and innovation. People are hopeful for the future, in there, you believe that you can change things in a good way.

As soon as he returned to Istanbul, he noticed some things about the interaction between technology and people in the public space: It has appealed a very young and wide generation. Since we are in an era surrounded by technology, it was already what people are interested in and there was a big perceptual understanding of it. The digital dimension is actively used -also technological tools like social media. All of this was very exciting for many people as far as I can see.

Through its practice, Alper ensures that new technologies will not just be used by humans for consuming… Remembering the original purpose of technology is very important to us. […]Technology brings a native nature to humankind but we are very poor to use it in a way that brings richness to our life. We rather use it for consuming, although it could bring a lot of profound, diversity and richness and preserve the ecology we live in.

Regarding the technology in architecture, Alper Derinboğaz makes a reference to the past, to better understand where we are now: In those days, technology usually brings a lot of promises small things can have a huge impact. For example, “Domino House” of Le Corbusier preceded his imagination and became the number one tool for increasing profit in building technology whereas he originally envisioned more democratized spaces, basically better housing for everyone. But we ended up providing better profit for the same type of people. Today companies develop a lot of different ways of sharing music images, etc. but everything ends up being an advertisement and a marketing tool.

The project Augmented Structures is a reflection of what it means working with a city in a digital dimension. Alper Derinboğaz believes that working in a layer in architecture practice and him referrers for instance to lightning which is a decoration, mechanics are piping through the building and so on, it is a very primitive way of doing anything in the age of information.

He adds to this: Imagine you are looking for a dramatic story about love but the librarian gives you a book about love and another book about drama. Is that fun?

Alper Derinboğaz goes on tellin us: In Augmented Structure, we did not use technology as a layer, we tried to use it at the core of our practice. […] We recorded sounds along the street. Transferred it to a virtual dimension, when it became digital it became a new language. A language that is going to be translated into geometry with a process involving pure mathematics. We collaborated with coders to convert those content into a geometrical composition which will also be the key elements forming our dynamic visual performance. This way the digital data that is conceived from sounds and the acoustic memory of the street, is translated into architectural forms through an intense modeling process. The nature of the design that is shaped around the memory of the site made Augmented Structures unique and attractive for visitors of the street.

The SALON perceives design process a way of bringing different people together from the sound engineer (Kerim Karaoglu), structural engineer (Selami Gürel), architects, media artist (Refik Anadol) and hundreds of people in Istiklal Street where Yapi Kredi Cultural Center is situated as Alper explains. Bringing all these layers of multidisciplinary approach together to develop diverse spatial qualities for citizens is very motivating for SALON practice.

Through his practice, Alper brings a new balance between institutional knowledge, technology, and humanity. At the Sound Cloud project, SALON practice worked with Can Deliorman, the chief of the State Symphony Orchestra. This project allowed them to explore another type of language that is different from the one they are using to work in architecture, “because it evokes different feelings.

They took different levels and changed the volume, sound waves and depth of sound waves. Having that compression that in every human being, there is a specific depth of sound Alper Derinboğaz concluded: Perception of one brings different personalities into music and we wanted to assimilate that on an architectural dimension, a more visualized level.

As a result of that comprehension, they conceived forms in different scales and they worked with visual artists to add a different layer on those. Added to this, they developed a static simulation of sound at different levels and then they formed a dynamic layer, as Alper explains.

The way we perceive ‘the static’ is changing through this design. So we decided to generate another pattern and created a visual that is changing along with the music according to the tune and sound. By that our design becomes condensed, sharp and fluid: an object that changes state and freezes it. It goes through different phases[…] Soundcloud is a performance that is finding a way into your senses through music.

Alper Derinboğaz concludes regarding these two projects: “Using those different dimensions of reality, sound, visual and even physical space sometimes, you can create different depths in terms of spatial experience.”

The directions that Salon practices tend to explore new projects in the future will allow them to question the existing realities. As Alper Derinboğaz states: A house, a culture centre, a museum or an art installation whichever the case we develop new realities that may critique or reframe our existing reality.

Today, architects use different ways to build the city, a city that now represents a physical and a digital part. Through its practice, Alper incorporates more and more digital information into the physical world.

The results of this practice can be perceived as a spatial digital overlap or a stratification of technology in the environment.

Aimee Aizhen Chen, an architect in the age of digital technology by Adriana Ciotau