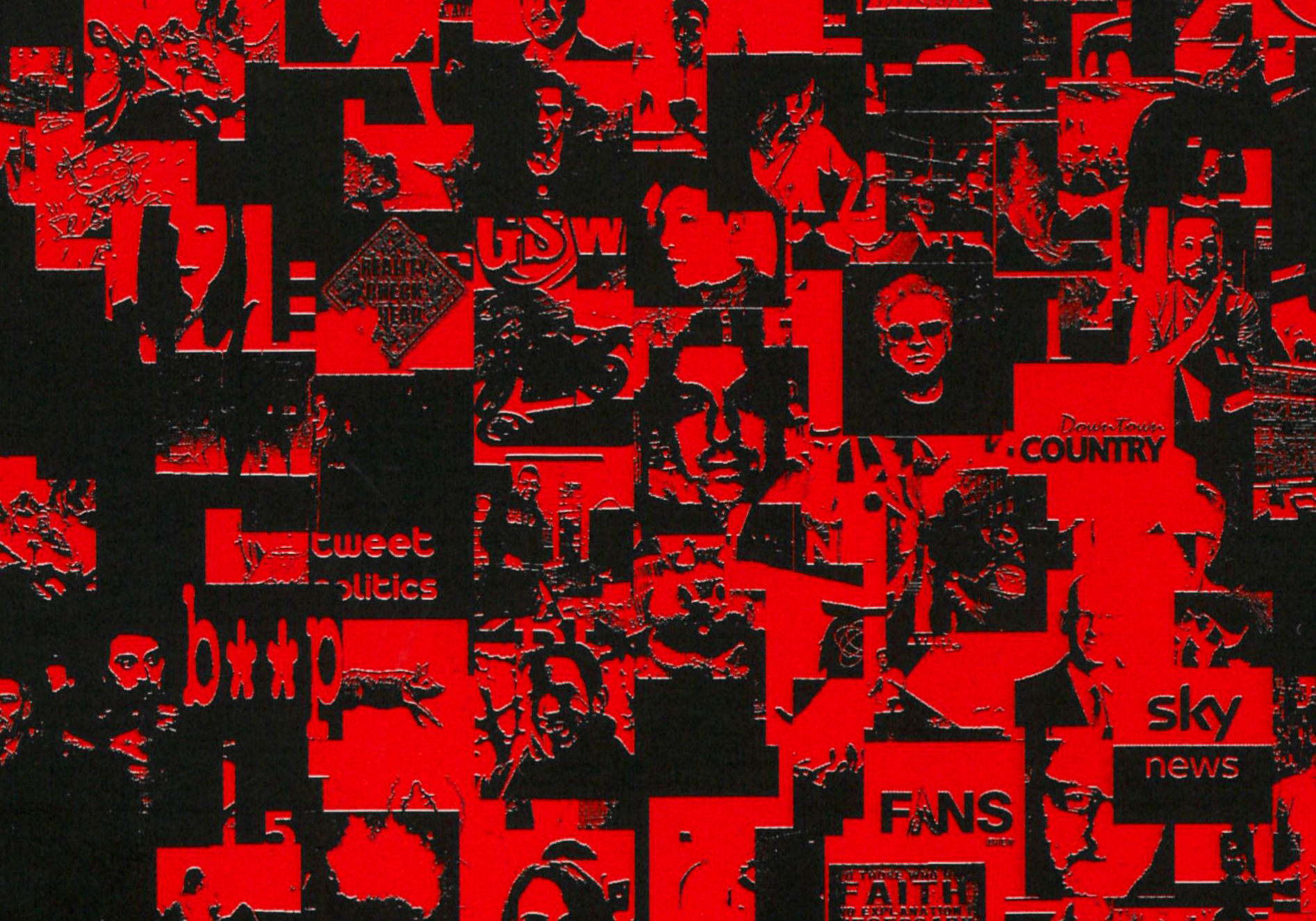 On the night of the 2016 UK Brexit Referendum, a single phrase echoed through social media and financial markets alike. Uttered a minute after polls closed by former trader and face of the UK’s campaign to leave the European Union Nigel Farage, the out-of-character concession helped to push the value of the Pound to a six month high, before it was brought crashing down by the reality of the Leave win. Amongst market volatility, a few London-based hedge funds moved against prevailing market sentiment and Farage’s timely concession by short selling the Pound – a seemingly counterintuitive but incredibly profitable play.

Audiovisual performance ECHO FX by London and Berlin based duo DMSTFCTN replays the events of the night by tracing the effect of Farage’s concession in its memetic tweet form and in its impact on ForEx markets. First shown at London’s Corsica Studios on the third anniversary of Referendum night as part of Hyperdub’s party series Ø in 2019, it was then performed in Berlin’s Berghain 48 hours before the UK left the EU, as part of CTM x transmediale festival in 2020. ECHO FX was released by Krisis Publishing in 2021 as a digital download and book featuring essays and visual contributions expanding on the themes of the performance, following a release announcement given by Farage himself on the fifth anniversary of the Brexit Referendum [1].

The events narrated in ECHO FX take place within seemingly unstoppable continuities: the news cycle of election coverage, the log-level [2] of social media, and the 24/7/365 global financial markets. The choice of tying any public presentation of ECHO FX to anniversaries or dates of key political events surrounding its subject matter is less commemorative than symbolic, a gesture towards the necessity to isolate, split, analyse and archive feeds and markets alike, or at least portions of those. This choice also offers a hint as to how the work is built and performed, as dates and timestamps take on a highly functional role in ECHO FX.

The 20-minute performance begins at 21:59 on June 23rd 2016 and concludes at 04:46 the following morning, aggregating into a single timeline thousands of tweets and retweets echoing Farage’s concession, the millisecond-by-millisecond index of the value of the Pound in the Dollar market, and the timestamped, local Referendum result announcements. At almost all points during the performance, a timer is present, indicating where in the night is currently being depicted.

Similar to the read head of a tape echo, the timer parses the underlying data available at a millisecond level of granularity and is in turn controlled by the artists when performing. As trigger points for both real-time and rendered visuals and sound sequences are tied to the 7-hour odd timeline, controlling the timer is akin to a form of live-editing through which the artists accelerate and decelerate in and out of key events, adapting both to the alternating intensity and relative quietness of different moments of Referendum night, and to audience engagement.

A hedge fund director interviewed as part of a Bloomberg Businessweek investigative piece about the night’s event [3], suggested that receiving exit poll or other non-trivial data “one hour ahead of the official Referendum result… would be like a lifetime for an experienced trader” and “20 minutes was more than enough” – an echo of Paul Virilio’s remarks that if time is money, speed is power [4]. The elasticity of the data parsing and playback method described above allows for playing with both micro and macro timescales as events unfold on the timeline of the night, stretching “20 minutes” to “a lifetime” or compressing “one hour” into a millisecond.

A third of the way into the performance, the timer is slowed to real-time – 1x speed – as the first local Leave result is announced, after having passed through an hour worth of retweets of Farage’s concession in a single minute, at 60x speed. As the announcer’s voice is drowned out by the triumphant cheers of the Leave campaign supporters, a real-time GBP:USD ticker is rendered on a screen showing the first in a series of short, intense Pound crashes.

ECHO FX existed exclusively as audiovisual work to be experienced in club spaces – “ambitiously lit, hermetically closed…strange/queer/monolithic/opaque/ugly-cute/temple-like” [5] – rather than as sound art or screening to be consumed in a gallery. Both as a dual-channel installation in Corsica Studios and a single-channel performance in Berghain, it strived for the immediacy and impact offered by a club’s sound system, lighting rig and architecture. Yet rather than inviting the audience to dance, discontinuities in sound and visual pace aimed to place the audience on alert, disorienting it or re-focusing its attention as needed.

The book ECHO FX (Krisis Publishing, 2021) operates differently. If the performance was a reaction, the book is a reflection, with the timer turned all the way down to 0x speed and into the negatives: a looking back, a gradual slowing of a timeline punctured with assertive, networked information and misinformation into a crystallised set of questions. The global focus on the Referendum coupled with its outcome’s simplified, absolute in-or-out nature created laboratory-like conditions for betting and ForEx markets alike to test inventive trading strategies, for its participants to feel the capacity of high-qualified and highly-transmissible information to move market prices, and for social media networks to stress echo chambers.

Through the slower format of the book, a series of textual and visual contributions reflect on trading strategies old and new, hedge fund aesthetics, filter bubbles and post-Brexit politics, leaning back towards the night’s events and forward into the subsequent years.

ECHO FX features texts and visual essays by artists CMP OFFICE and DMSTFCTN, scholars Obsolete Capitalism and Valentina Tanni, an investigative piece on the night’s events by Bloomberg Businessweek journalists Cam Simpson, Gavin Finch and Kit Chellel, a manga rendition of the audiovisual work by Krisis, and a source-quality download of ECHO FX as performed.

The following is an excerpt from Obsolete Capitalism’s essay included in the book and entitled First outlines of a modal economy:

In some ways, the events narrated in ECHO FX still belong to a traditional world of financial speculation, one driven by hidden agendas and encrypted information. Farage’s media-savvy, contagious capacity to persuade was likely refined during two decades of shouting and trading at the London Metal Exchange [6]. His concession, a sort of amplified market-tribalistic act, can be read as an artful meme counteracting the Real, a shout distorting the purity of the (true) signal through the (faux) credibility of its broadcaster, creating a cognitive fog shielded by a wall of counterintuitive noise. Such counteracting requires a False Event – that Remain would edge it – to be touted as true, as well as the operational complicity and capacity needed to draw on discrete information sources – such as in-depth private polls showing a likely Leave outcome. On Referendum night, the cognitive fog of the False Event permeated public and private digital platforms alike with instantaneous transmission speed, displacing interconnected, global market actors and their exchanges of the Pound for foreign currencies with an amplified capacity.

[1] instagram.com/p/CQOVV82Bgrs
[2] To comment on the collapse of temporality into a sense-less scroll, writer Venkatesh Rao coined the term log-level. Log-level thinking is the inability to monitor information on a timeline in any other way than as a computer logging events – “the tick-tock stream of raw events being recorded, prior to being evaluated and filtered for significance”. ribbonfarm.com/2020/03/09/plot-economics/?aggregates/on-global-narrative-collapse-events-venkatesh-rao
[3] The Brexit Short: How Hedge Funds Used Private Polls to Make Millions” by ByCam Simpson, Gavin Finch, and Kit Chellel, Bloomberg Businessweek (June 2018). bloomberg.com/news/features/2018-06-25/brexit-big-short-how-pollsters-helped-hedge-funds-beat-the-crash
[4] From an interview with Le Monde (October 2008). English translation: sites.google.com/site/radicalperspectivesonthecrisis/news/paul-virilio-on-the-crisis
[5] Club Ruins” by Martti Kalliala from Flash Art #311 (December 2016). flash—art.com/article/martti-kalliala-club-ruins
[6] Open outcry ring trading inside London Metal Exchange youtu.be/VOvA5HWdbmc


*DMSTFCTN studies the intensities of late capitalism, engaging with its networks, interfaces and excesses.

ECHO FX is published by Krisis Publishing (2021). Get your copy here.