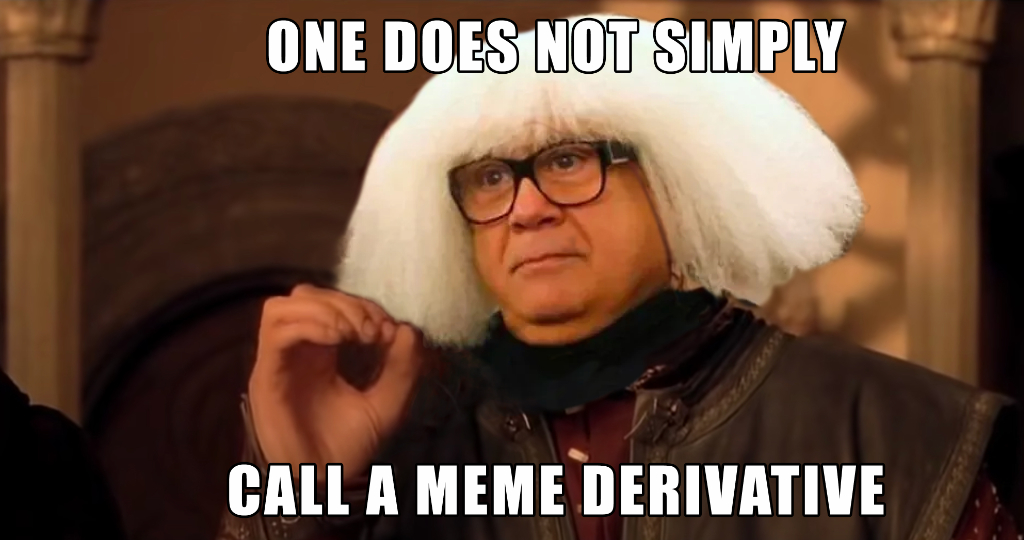 In a well-known scene from It’s never sunny in Philadelphia (2016), Danny Devito plays Ongo Gablogian, an “aht” collector that sashays around a gallery verbally destroying every piece and dismissing one artwork as simply “derivative.” Yet if Ongo Gablogian was browsing an NFT gallery today and came across a few memes, he would not be able to dismiss these cultural pastiches as derivatives, as memes have become minted and monetised as collectible digital assets.

The recent sales of classic memes at NFT auctions have seen a handful of meme creators compensated, in some cases for unprecedented amounts. While the monetisation of memes might seem like a boon for the creator economy, questions remain whether these sales have addressed longstanding issues regarding copyright, cultural appropriation, nonconsensual media and the value of collective creatorship.

As memes are repackaged as collectible digital assets, what do these sales tell us about the differing status of authorship and informational labour as the information economy rebrands itself as the creator economy? Can a meme be attributable to a single creator and did the Doge Dog fetch $4 million (arf)?  And more importantly, as the internet becomes hyper-monetised under different regimes of copyright, ownership, and governance, can memes survive as distributed or participatory media?

Shifting between infringement, authorship, and exception, memes present a challenge to conventional copyright law. Like humorous tricksters, they often evade the paywalls and walled gardens of heavily fortified intellectual property and digital rights management. Under Fair Use Laws, they can fall under parody, quotation and parody. Memes were made an exceptional exclusion from the EU’s controversial copyright directive, which sought to make platforms liable for users’ copyright infringement and uploads.

As cultural analogies to genes, memes are characterised by their capacity for replication, mutation, creating spin-offs, and gnomic expressions. A meme as a single unit or collectible asset makes little sense within an art form that is widely disseminated or distributed by definition. The Philosopher’s Meme, an online research collective, sees the internet meme as an important new step in the progression of art towards a participatory and democratic form possible only through this specific medium [1]. In other words, if you make a meme but no one sees it but your mother who turns it into her screen saver, it is not a meme. A meme exists to be shared.

Memes are less defined by content or style than as a social or cultural technology that changes over time, as the Philosopher’s Meme clarifies in the ‘six eras of mimetic history’ [2]. As viral units of online culture, memes make their way through public forums, private messages and individual newsfeeds, acquiring new inflections or mutations.

As a circulating cultural currency, memes have been subject to financial comparisons long before they became financialised. In 2016, a Reddit group called ‘MemeEconomy’ set out to create a parody of the financial markets [3] in which memes deemed to have high cultural value trade on the group’s ‘NASDANQ’. Dank memes are memes that have passed their shelf life but retain a whiff of residual or secondary humour, or else are just intentionally abstruse, twisted, or niche.

In 2021, several well-known vintage or dank memes such as ‘Disaster Girl’, ‘Bad Luck Brian’ and ‘Grumpy Cat’ sold not on the NASDANQ but in NFT marketplaces for large sums of digital currency. However, not all NFT meme sales result in astronomical amounts. The ‘Four Lads in Jeans,’ for example, attempted to sell their digital photo for a reserve price of $1 million, allegedly only achieving a sale of  $1,100. The four lads claimed to have put up the work for auction to raise awareness and claim compensation for the trolling and online bullying they experienced after their image went viral without their consent.

For meme creators whose images went viral without their consent, NFT meme sales may offer a degree of compensation for damages suffered. However, these claims to authorship and attributability do not necessarily set a clear precedent for countering the abundance of nonconsensual media on the web. In the case of image-based abuse, most copyright laws can do little to protect or compensate victims of an attack unless the image is a selfie, as full authorship is given to the photographer and not the person photographed. Furthermore, the sale of NFT memes as compensation for nonconsensual image sharing does not address the difficulty of taking nonconsensual media out of circulation.

In addition, the majority of NFT meme sales being widely publicised in the media have overwhelmingly featured White content creators receiving financial compensation for their images; as noted by Delia Cai [6], The sale of NFT memes has done little thus far to address the compensation and monetisation gap between White and non-White content creators, or to counter the appropriation of the original content and work of Black creators [7] which includes countless memes and GIFs.

Critical race IP scholar Anjali Vats discusses how coloniality and racial scripts have conditioned the development of copyright law as a tool for perpetuating unequal structures for knowledge and cultural production. Collective myths around intellectual property citizenship reinforce and update Euro-American ideas of Romantic Authorship/Romantic inventorship, Vats states; furthermore, within these understandings of Romantic authorship are intersectionality inflected racial and colonial presuppositions about the value of white male knowledge and the value of people of colour knowledge [8].

Copyright law and legal notions of authorship have conditioned the unequal ways that knowledge and culture production have been attributed and produced. Memes, as widely circulated, remixed, and viral media could follow alternative models of co-creation or collective attribution otherwise excluded or overlooked by copyright law. New models of intellectual property and shared attribution could move beyond current legal concepts, which have historically rewarded privileged, colonial, and human-centric forms of creativity at the expense of other forms of knowledge creation, including communal, non-capitalist, and oral traditions.

In her work on the relevance of the Romantic genius to copyright and legal definitions of originality, professor and legal scholar Martha Woodmansee traces the influence of professional literary authors in 18th century Britain, Germany, and France. According to Woodmansee, the concept of the ‘original genius’ draws heavily on individualised, romanticised, and ephemeral forms of inspiration rather than on material craft which often relies on collaborative methods of working and sharing knowledge [9]. In the genius paradigm, intellectual labour is held at a higher esteem than those of so-called imitative crafts.

In writing on genius as a counterpoint to mechanised work and automation, Dave Beech points out that genius is always a discourse on labour as containing a moment of absolute freedom [10]. Beech contrasts the genius figure with that of the robot, whose labour is not free by design but bounded, repetitive, and automated. While the virality of memes is not solely the product of automated or algorithmic labour, it relies on countless users’ distributed digital labour.

When an NFT collector purchases a meme from a meme creator, an exchange of value transpires between a buyer and seller, leaving all other forms of labour and value creation invisible. This includes the informational labour of sharing the meme, the existing context of meme lineages that give the meme its particular meaning, and other pastiche elements or references. Moreover, memes often extend over multiple ownership sites simultaneously, in a web of shifting attention economies and displaced copyright claims.

To complicate matters further, neither the owner of the NFT meme nor the meme creator legally has control over the circulation of the meme nor can license the meme. In other words, neither the creation of the meme as an original work nor its sale as an NFT resolves its authorship or ownership status. However, for technology writer Drew Austin, the unstable ownership status of the NFT is an attempt to preserve fluidity and scarcity simultaneously and a potentially more elegant solution for monetisation [11].

For a digital asset to produce value, it is usually protected by copyright which conditions access to the work and controls duplication. Digital Rights Management tools create barriers between public and private media using encryption, watermarking, and other digital protection measures. These digital tools prevent or restrict media from entering the public domain, carving digital real estate into profitable zones. However, the NFT meme as a collectible digital asset makes the reverse journey from public and viral media towards digital scarcity, using digital certificates against an already widely disseminated image. Thus, the NFT meme’s trajectory is from the public domain to collectible asset, or as Austin observes, a simultaneous straddling of digital scarcity and abundance.

Can memes continue to occupy an unstable position between infringement and creatorship, single authorship and community-driven forms of media creation? In the shift from the information economy to the creation economy, digital creators are being promised greater revenue capacity from large platforms which depend on user-generated content. However, it is unclear how the monetisation of content in the creator economy will differ from the exploitive knowledge work characteristic of the cybertariat or the precarious gig economy. Information wants to be free but is often cheap until aggregated by large actors.

Can the meme’s virality survive the monetisation of every action and digital asset on the internet? The meme as a viral unit of cultural capital exists as part of what Jonathan Beller terms ‘economic media’: the monetisation of semiotic or social structures, a process of value extraction that is content-indifferent and puts the expressive (attentional, cognitive, affective) power of people to work [12]. Value producers, Beller writes, yield their value to those further up the hierarchy: platform owners (of networks, factories, or plantations) reap the spoils [13]. Will the meme become subsumed by large platform interests and the affective labour of content creators trying to eke out a living in the creator economy?

Perhaps Web3 or the decentralised web will produce more equitable or community-driven solutions to the monetisation and collective attribution of media creation. The emerging paradigms of encryption and decentralisation could produce novel approaches to authorship by introducing forms of fractionalised creatorship. For example, could emerging technologies like Imagechain, which allow images to be stored as data in distributed ledgers [14], produce alternative strategies for collective attribution and participatory media creation? The NFT format might also be an excellent place to experiment with new valuations for multi-author, post-author, and community-created art or cultural commodities.

Applying conventional notions of copyright and collectibility to memes might only aggravate differences between partially compensated creative labour and wholly uncompensated informational labour.  Additionally, the recent sales of NFT memes have done little to set precedents for important issues relating to digital consent, racial disparity, and the future of participatory or collective media. A few digital creators might see some financial rewards but leave the rest of the online community thinking: weird flex, but ok.

(Photos courtesy of the writer)