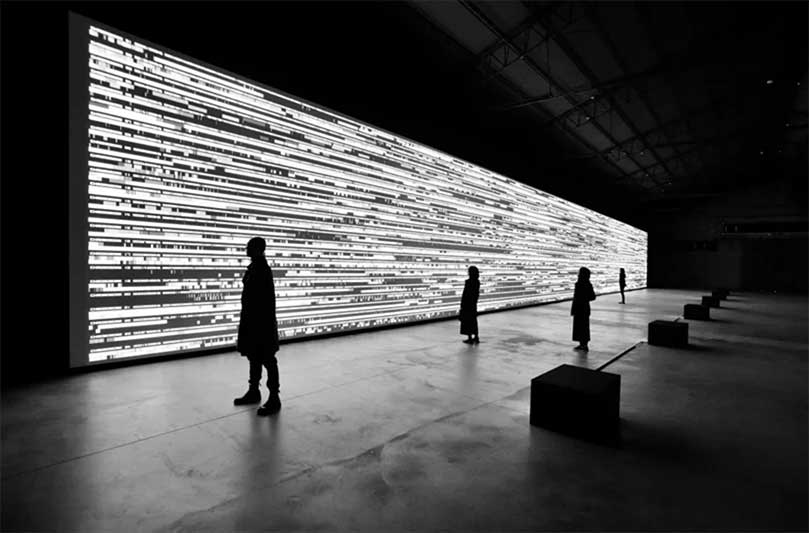 Remember when data was a somewhat mysterious but specific collection of figures and potential facts that existed on actual paper or inside huge, beige-grey machines in offices? Or, if the film had sufficient budget and was slightly out of this reality, in towering drives navigated literally by walking among them, or controlling some kind of remote robotic entity that was able to perform extractions and installations of their content? The mind is drawn to absurd images from Hackers, among other depictions. In those narratives data was connected to specific people and specific situations, limited and exhaustible, an information hamlet which would cower in the shadow of the cacophonous metropolis it has grown to occupy.

In a massive expansion of the material and the abstraction of its behaviour and structural make up, it has become a legitimate artistic medium in itself. Sound, music, visual arts, poetry and prose have all exploited an influence from or interaction with data, in descriptive and exploratory techniques or through a direct injection, using data as an algorithmic or generative device, or a means to convert one form into another. Academia has provided subjective critique, and the automated systems allowing society to archive itself through information megaliths bleed into hugely significant controversies such as Trump’s election campaign and the ongoing and unending drama of Brexit.

The use of data underpins much of Ryoji Ikeda’s work, as stated clearly in the artist’s own description of 2008’s Datamatics, a piece which ‘explores the potential to perceive the invisible multi-substance of data that permeates our world’. Now 11 years on, Ikeda’s subject matter is expanding at an exponential rate that mirrors the expansion of the known universe. The new, aptly titled Data-verse is a piece of work that is magnificent in scale and ambition, drawing together every essence of our being as the micro and macrocosms of experience are put through various processes of sound and light interpretation. At the source of the work are various datasets drawn from institutions including CERN, NASA and the human genome project.

The piece is currently on show at Venice Biennale, currently part way through its 58th year, and is designed to act as much as a trigger for the audience to form their own experience as it is to exist as a work to be encountered in passivity. Located in the Arsenale, this first instalment of a three-part work will be open to visitors until 24th November.

Data-verse seeks to epitomise a central technique that has grown in Ikeda’s work since the more reduced audiovisual explorations of the late 90s and early 2000s – something you could conceivably call a maximalist deployment of minimalism. Cyclo (2000), a collaboration with fellow Raster-Noton artist Carsten Nicolai, is pinned on a no-frills form of digital cymatics, revealing the movement and behaviour of abstract sound via stark visual geometric motion. In many ways, this theme is at the core of Ikeda’s more recent works and Data-verse stands as the most grandiose of these to date. In maximising the presentation of the source, itself engorged through endless archiving and constant updating, two clear statements are revealed: 1. We’re drowning in data, saturated to the point of confusion, surrounded and infiltrated by airborne information. 2. The very essence of our beings can be broken down into elemental bits, ones and zeros, and translated elegantly and plainly into a sensory experience that explains the intricacy of our multiplied and consolidated existence.

Ikeda is exposing an environmental element visible to us only via technology but, conceptually and actually, woven into our surroundings as ubiquitously as the oxygen we breathe. A question mark hovers over the role of the work as a criticism of our data-driven existence. Does it matter to the piece at all? As with previous Ikeda works, extremes of aesthetic precision and technological reconfiguration take the spotlight away from any kind of social commentary. Indeed in this instance, Ikeda considers himself to be a composer first and foremost, arranging information that is unaware of its significance removed from function: ‘Rather than creating a traditional musical composition, I used data as my source material, applying a system and structure as you would with any score’. In this somewhat humble statement it is implied that, save for an evidently meticulous processing environment, notable magic lies in the mysterious capabilities of the source information.

On the subject of meticulousness, special attention must be paid to Audemars Piguet who have been instrumental in the realisation of this project. In the company’s own words they aim to support the ‘connection between the worlds of arts and crafts in an ongoing quest to combine artistic excellence and technical mastery’. The Swiss watchmaker’s inherent flair for precision partners perfectly with Ikeda’s craft and will go on to support the next two instalments of Data-verse.

Those intrigued by the ambitious and disquieting scale of Ryoji Ikeda’s newest vision will be confronted by an experience that overwhelms and educates. From our limited viewpoint, the extent of the information and restless relationships that describe contemporary existence are largely hidden. In unearthing, decoding and presenting these at such a scale Data-verse is able to show us a world within a world, one that is abstract and mysterious yet strangely familiar.