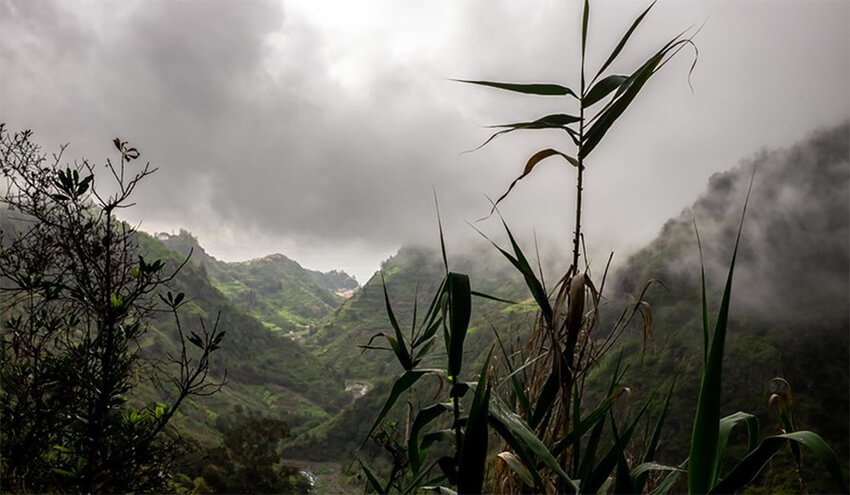 The unassuming island of Madeira is known for many things – Madeira wine, its round the year spring climate and forest walks. The slow pace and gentle atmosphere make it a popular choice for northern Europeans seeking a winter break or a sub-tropical retirement destination.

Sitting within the sedate island temperament is Madeiradig, an annual presentation of experimental and avant-garde music operating from the sleepy village of Ponta do Sol. The location, on the island’s calmer and sunnier south side, provides an unusual backdrop to a masterfully put together experience in adventurous sound.

Sitting proudly atop a cliff edge like the prow of a ship, the Estalagem hotel is the festival’s social hub, its clean lines and modern attitude preempting the aesthetic decisions that characterise the event. Along with Digital in Berlin, it is a leading force behind the organisation.

In parallel to the well-executed, technologically focused programming, Madeiradig is about as refined and contemporary as you can get. The basic structure comprises two performances per night held at the Casa das Mudas contemporary arts centre, followed by a party at Estalagem with DJs that play electronic music far in the direction of sunrise. Slight variations have occurred over the years – extra performances, pop up bars and installations.

Speaking to Michael Rosen, the festival’s lead organiser, the profile of Madeiradig is evidently based on contradictions and uniqueness. Many visitors see this as much as a holiday as a festival, which makes sense given the surroundings. The unsaturated lineup allows time to reflect more deeply on the content and to assess the sound field of the island free of scheduling pressures. The audible richness combines dogs barking in distant yards, the breeze shifting drooping banana trees and the endless white noise of the sea, a natural digital fizz laid over everything. The sounds of the night – devices, computers and instruments – segue into a natural daytime soundtrack, and both have their significance. A reminder of the chaos of modern living, and its harmonic counterpart. A binary, perhaps, but one softened by the spectrality of human needs.

“It’s a festival for people who don’t enjoy festivals,” Michael suggests, calling into question whether or not this can really be seen as a festival at all. In a way, it could be seen as a live, soundtracked social experiment. Returning figures are of course not subject to the experiment as much as newcomers, who are invariably bewildered and wowed by the experience of it. The power in the understatement is the most intriguing element.
The digital-social concept reveals another dimension when you consider Michael’s assertion that many of the festival’s attendees don’t usually listen to abstract music. The otherness of sonic adventuring is met with the relocation of open minds, transplanted from normality into a temporary realm.

It is interesting to note the unique way the programming of the music and sound aligns with the community environment. The ‘dig’ in Madeiradig does, after all, stand for ‘digital’, yet natural forces and the ‘analogue’ pursuits of socialising, eating and the enjoyment of the outdoors are what create such an intoxicating atmosphere. This year will see performances from the likes of noise polymath Keiji Haino and digital pioneer David Rosenboom, yet many will be equally anticipating an afternoon spent in the sauna and steam room.

The ‘dig’ suffix could be brought into question, but Michael Rosen’s conceptual justification is clear. The term has been abstracted to denote ‘difference’ – the effect of a frenetic noise blast in a warm, silent night, yes, but also a forward-thinking community coalescing in a sleepy, traditional Madeiran village, laptops and iPhones on the cafe tables; of straight lines scaling cliffs and dividing agricultural land.

Historically the festival has featured many artists working in the digital and technological realm, and this does steer its course to a large degree. Amnesia Scanner, for instance, was a unanimous highlight of last year; a couple of years before that the Editions Mego marathon that featured four back to back performances. This is not to say Madeiradig isn’t a place for other aesthetic explorations. Technologies are blended onstage, celebrating a history of development in sound-making tools. On an island where building tradition gives way to pockets of architectural modernism, this makes sense. On the other side of the spectrum, other performances have done away with modern tools altogether – the late Tony Conrad in 2014, Sevlhenter in 2016. Still, in these cases their placement can be questioned through a technological lens – can they be seen as a useful barometer for how far the current sonic arsenal can be pushed?

The auditorium of Casa das Mudas is a work of modern art in itself, lending its austere black interior and minimalist seating to the digital aesthetic. The programming of AV projects makes full use of the setup, where projection stands second only to sound. Hecker and Tina Frank’s audiovisual digital onslaught was a highlight of 2015, possibly one of the most out-there statements to polarise with the darkened stillness outside.

This year Madeiradig has undergone its most dramatic development since its early years, expanding from the four-day format to engulf just over a week. November 29th sees a sort of casual opening evening, with performances beginning the following night and continuing, with a two-day break for regrouping and more extensive exploring, until the conclusion on December 7th. This allows for more local inclusion in the programme, and for a widened use of locations – for instance, the John dos Passos cultural centre which one year hosted a screening of Bjork’s Biophilia Live. The result is increased crosstalk between what is drafted in, and what is already there.
Michael Rosen cites a quote he saw in a Berlin newspaper where the term ‘noise and wellness’ was mentioned. This, if anything, is emblematic of Madeiradig’s significance in the digital world.

Many of us experience lives strangled by technology, with dwindling access to unplugged hours and a workplace that expands beyond the boundaries of a nine to five office. Madeiradig’s response seems to have one central objective: to deliver the best of what the digital and technological world can offer – a high specification retreat and some of the most visionary sound-based artists of the last few decades – but within a framework of calm, and of care. It offers a glimpse of a sonified tech utopia, a statement that is both insightful and touching.