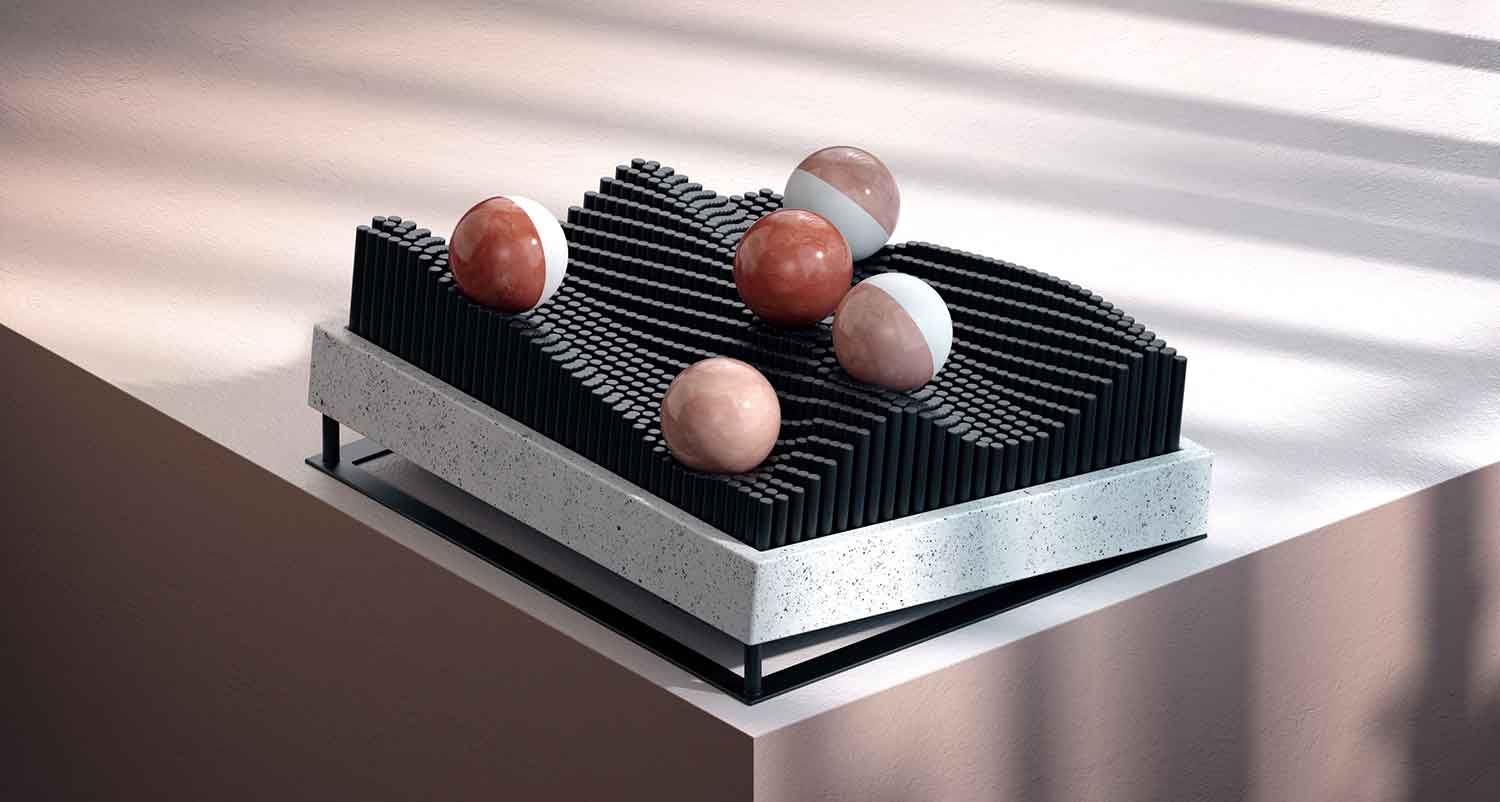 The pendulums swing back and forth in an endless movement. All three pass in perfect adjustment through holes in a hollow cylindrical form that moves at a constant speed on two rolls. In a real physical environment, gravity would change the movements at some point. But Swedish graphic motion designer Andreas Wannerstedt created a space in which gravity does not exist. Hence, his objects move in endless loops in the same way. For hours, one can watch the pendulums’ perfect movements, which, in reality, are only 20-second videos on Instagram.

It is impressive how motion graphic design can trigger feelings. Is it the three-dimensional bodies portrayed? Is it the memory of how physics works and how materials feel like? It seems like motion graphic design can bridge the gap between reality and fiction in a way other art forms cannot. The designers play with natural forms but ignore physics. They confront the audience with something relatable in a peculiar way. It can almost feel what it sees. In the case of Wennerstedt’s works, this is something comfortable and calming. But it can also be disturbing like the videos of 27-year-old Steven Baltay, an American visual artist based in Brooklyn.

Baltay’s works often show human-like figures in pink, grey, white or golden. They are wobbly and tend to be victims of their surroundings. Ahead is being squashed by over-dimensional fingers, a sofa inflates itself and presses two figures against the walls and ceiling. Through the mouths, eyes and noses the characters issue fluid material or other human figures and body parts. Everyone who has thrown up once in their life or has played with wobbly material as a child can imagine to an extent how Baltay’s protagonists feel. The artworks show surreal experiences. For the audience, they can be like more realistic science fiction scenes.

The number of artists who work with these techniques and effects is growing. Steven Baltay’s works can be compared to the ones of Randy Cano or Extraweg. Lucas Zanotto or Arben Vllasaliu do videos similar to Wennerstedt. What connects all of these artists is the technique of looping. With this, they can optimise the videos for social media and especially Instagram. The platform was also the starting point for Wannerstedt’s “oddly satisfying” series. He uses the technical requirements to his advantage and includes it in his work. For this, his videos show an effort in making the loops perfectly seamless and thus create the optimal user experience.

To create a loop, everything has to be perfect, he says. The movement, the synchronisation. Wennerstedt works with Cinema 4D software and Adobe After effects to make the videos and movements they show endless. This includes all the textures that need seamless looping as well, especially with a moving camera. He estimates that he needs up to two days for a commercial product from the concept of modelling, texturing, lighting, and rendering.

After some time experimenting with the geometrical forms, Wannerstedt received a lot of attention and messages from viewers who found his animations oddly satisfying. So, he began to make it his niche. While Wennerstedt stumbled upon the effect of his work by accident, Baltay had it in mind all along: When you see a rubber statue vomit, for example, it’s a weird feeling. I know it weirdly pokes you. So, everything starts with that. I always think about: what can I do that will be provocative and emotional to make you feel strongly.

Baltay gets his inspiration by looking at the work of other artists and combining it with his ideas. The focus on mouths and eyes was something he discovered on Christmas two or three years ago when he was bored and experimenting on his computer. He had a wobbly character vomit a rubber ball, and since then, it has been a returning topic for him.

But Baltay has already been doing animation since he was eight years old. Back then, he discovered the 90’s software Anim8or and started playing with it. I was so young, but I just knew this was the coolest thing I’ve ever done. And then I just never stopped.

He used to sketch when he had an idea, but now, he starts working on the 3D software right away if an idea sticks with him. Like this, he sees right from the beginning of a project works out or not. Baltay also focuses on the concepts primarily. Colours, shades, surfaces and the seams come afterwards.

So, in a way, his work approach is entirely different from Wannerstedt’s whose videos are so unique due to the perfectionism he puts into those details. Wannerstedt always starts with a sketchbook to put down the very initial ideas that he often has when he is in bed or far away from his computer, as he says. When he starts to explore these sketches with the software, they tend to go into another direction.

He gets his inspiration from the real world, where he sees a lot of motion patterns. The idea for the pendulum, for example, came from marbles. I saw this kid playing with them and saw the possibilities of the motion. So, I developed the concept. Afterwards, he turns to the visuals. I’m a big fan of textures. I like to discover them in the real world as well, like different kinds of woods and carpets. Wannerstedt says that it is especially different designs in architecture and interior that give him the ideas for his designs.

As a kid, he was interested in design and a fan of drawing and traditional art. In Highschool, he was introduced to a 2D animation tool, the Flash software, mostly used on websites. Since many companies wanted cool flash intros back in the ‘99s, he started doing this. 3D animation was something he was introduced to in the US when he was doing an internship in Los Angeles. I started to dig deeper into the whole world of 3D and was inspired by architecture and the possibility to create surrealistic renders. Since 2007 Wennerstedt focusses on 3D only.

He worked on short films for some years and spent eight to nine months working on one project inspired by architecture and sci-fi. But it was hard to get the attention he wanted. So, he tried to come up with something easier to produce. And with social media platforms such as Instagram, he found a way to get the work out easier, too. About three years ago, he started to create the looping videos, custom made for Instagram. It became his primary channel to get new clients because brands and agencies look for the artists on Instagram.

Baltay, too, uses this channel to get attention. But he sees a challenge in how you present animation compared to any other art: If I make a painting, I take it to a gallery, I sell it, and I make money. But if I make an animation, I put it on Instagram, and I get likes, and I count only likes but I don’t get money, so I do it for the attention only. That’s a huge difference for a visual motion artist. I think we should ask ourselves how we treat motion graphics. Like fine art, like a painting? No one has thought about it that way.

He certainly shares the conventional artists’ challenges when working with clients, as he explains further: If you’re a creative person and people tell you: here is a list of things you have to do, you have to give up your creative vision to some extent. And you’re like, well, it doesn’t look like my style anymore, but I think they’re going to like it. And then they get super involved, and you have to redo everything. And at the end of the process, it’s not something that you like, and you don’t feel proud because it’s not yours anymore. Wennerstedt faces a similar conflict.
The work on Instagram is only personal work for him. But most of the commercial work is based on these personal projects. But then he also gets a lot of requests from people who want him to create unsatisfying animations.

As an artist, Wannerstedt is thinking now of making his creations real, in a physical exhibition. He had discussions with engineers who reached out to him to talk about it. Because some of the satisfying concepts are almost possible to create if one helps out mechanically. Until now, he only had exhibitions on monitors which is not the same. Baltay just finished his second short film. He searches his inspiration also in artwork from the last twenty or thirty years. But again, older works from Jean-Michel Basquiat for example or even renaissance paintings. He follows over 1000 artists on Instagram and with all that influence will continue to explore ways to make surreal videos that have curious emotional effects on his audience.

(Pictures courtesy of the designers)