Transdisciplinary, research, creativity, collaboration, bio-… there are just some of the keywords that pop-up very often, maybe too often, when we are talking about contemporary investigative arts, intermedia arts, bio art… whatever you want to call it. Just as (now already) classical art approaches throughout the 20th century wanted to close the gap between the artist and spectator, so do the above-mentioned contemporary art practices want to converge and cross art and science, conceptual and performed research. With that comes the new (art) production model, which presupposes artwork’s value not (necessarily) as a commodity to be bought and sold, but as a commodity which can be implemented into another (that can then be bought and sold). The most important factor is thus the creative process and the new conceptual frameworks that arise from it. No matter the fancy words, the scale is still tilted towards “art”, and the balance is certainly not yet achieved, especially the balance between creating and implementing, between conceptualising and product development. A couple of companies that truly belong to this highly praised ‘creative industries’ sector do exist. One of them is undoubtedly MOGU, whose co-founder and director of research and technological development is Maurizio Montalti, who agrees that “there is a major gap between the nature of experimental design projects opening up novel perspectives and their actual implementation towards the largest collectivity”.

Montalti is an Amsterdam based artist, researcher and lecturer, whose work “tends towards the exploration and questioning of the design discipline”. Through his work he “investigates and reflects upon contemporary (material) culture”, to create “new opportunities and visions both for the (creative) industry and for the broader social spectrum”. In 2010 he founded Officina Corpuscoli, a multidisciplinary studio and also a name for his practice in general, which operates across various medium and themes, from biotechnology, anthropology, biodiversity, to new production technologies and alternative societal advancements. It’s about finding and “revealing unorthodox relationships among existing paradigms”, and above all about synthesising “ideas through design”. “As part of the work conducted and developed at the studio [OC] there is certainly more freedom, allowing acting in a more fluid way, as the studio is a less pragmatic type of entity situated in the cultural realm – a hybrid one – at the boundary between art, design and science”, which means that the work developed there is generally mediated to the public through exhibitions in galleries and museum. Montalti told us about his partial frustration in relation to the  lack of real impact for the many: “of course the studio work contributes to creating impact by triggering a mind shift processes, letting new critical perspectives emerge and analyzing opportunities for further developing our material culture and so forth”, but his desire has also been the one of wanting the related products to “come to the largest collectivity and not just the “elite”, at an affordable cost”.

Officina Corpuscoli is operating as a design research-lab, a place for investigations related to the way in which microbial systems can be employed to produce alternatives to traditional synthetic polymers, with a sharp focus on fungal organisms. Montalti explains how it all started from a fascination with biomass growth: it was amusing to witness such a “phenomenon of continuous generation of biomass at a relatively fast speed. The more I was engaging with processes related to the degradation of materials, the more I was observing the creation of more biomass. Based on that the focus switched to exploring the potential related to the development and introduction of the related disruptive perspectives, novel paradigms and the consequently emerging new materials and products”. The Growing Lab / Mycelia is a long-term “umbrella project”, “a project that puts under the umbrella lots of different iterations and investigations looking at the potential of converting low-value waste streams or residual byproducts of other value chains into new, high-value materials, which results from the combination between fungi and such feedstocks”. Here begins MOGU, a design-innovation, product-oriented company that would embrace the challenge of developing, designing, industrialising and marketing such typology of materials, to satisfy specific market demands. Officina Corpuscoli still exists within its own autonomy and the various other projects and themes treated at the studio, though the experience generated there in a first instance has now become integral part of MOGU’s R&D: “protocols have initially been conceived here [at OC], but have then been transferred and further refined at MOGU, with a strong focus on standardization and industrial scale up”.

Montalti also reflects on a pivotal question, such as“… what is a product? Can a simply grown material be considered such? It is unfortunately not sufficient to conceive a semi-finished, undetermined material as a product, by banally focusing on the  ‘oh wow’ effect related to the process. That is, without a doubt, a very exciting part, but the wow effect lasts very short. Ultimately, what matters is that, whichever is the nature of the process implemented, the related positive disruption and inherent responsibility introduced, a product must deliver performance, in line with every specific application chosen. And that is what Mogu is actually really focused on”.

At the beginning of 2015, driven by both the wish for these processes and materials to create some impact on a larger scale and by the related environmental responsibility, Montalti co-founded MOGU. It started as a small technology platform,  “aiming to implement very consistent protocols that could allow to complying to industrial requirements – and you know, how complex that can be when working with living materials – to start from certain protocols, formulations ingredients, conditions and so on”, he commented. Nowadays, MOGU is a company in its fullest sense, with a clear design identity and an industrial/commercial nature. The investigations taking place along the years are many, looking at multiple processes, products and markets, therefore not only focusing on the commercialisation of bio-composites but also on many other directions within R&D (e.g. fashion, food, etc.). Montalti thus calls MOGU a “design-innovation company working with biotech processes”.

Their main thrust is in delivering performance-driven products: for this they implement, specific protocols and inventions fully developed in house, Montalti continued by saying that they “achieved very stable protocols and replicable outcomes within consistent processes”. Working with fungi that means firstly identifying “the right fungal strains that can be optimally matched with the chosen substrate, or the other way around, to engineer the products and their technical properties from the very start ”. This is easier said than done since there are millions of fungi in nature and “in some cases, strains with the exact same name can have up to  12% genetic difference. Meaning that they are simply tremendously different from one another, particularly when thinking about the fact that man and chimps have up to a maximum of 4% genetic difference. So we’re here really talking about totally different universes”. Secondly, it means choosing and setting the most appropriate parameters (within environmental conditions, treatments, etc.) to allow determining the effective properties that will characterise the deriving materials and products.

Their focus is three-fold. Firstly the materials, then the processes and production and thirdly, the market. But what comes first is always the product; all the other elements are functional to it. As Montalti said, “you need to challenge the status quo of materials, the production methods and the related economics”. In some cases, there are still deviations based on the fact of MOGU’s technology relies on living agents. In industry, the demand is to make things always the exact same; while Mogu has the need to comply to such approach, when dealing with living processes should consider a potential acceptable range of variability. As part of his studio practice, Montalti has always worked with“imperfection as a value”, though he explains about how different things clearly are at industrial level, where imperfection is considered a major issue. “When developing projects at OC, the value mostly is found within the very act of witnessing, trying to understand and further encouraging the emergence of spontaneous, autonomous processes, where the involved organism takes a leading role, as equally respectable and valuable to the one of the human”, Montalti said. “This type of cooperative value is also found as part of the resulting imperfections emerging from the materials and of the organic language that the materials themselves express”, he added.

At this specific moment, MOGU is focused on introducing in the market products dedicated to the realms of interior architecture and design. Montalti told us that the company is now “ready and about to launch its first products’ collections in mid-2019”. Those will be “different typologies of wall-mountable modular elements, for acoustic interior comfort, clearly characterised by a strong design aspect and identity”. It seems that at Mogu they really overcame this whole simplistic idea of “just” growing materials.

(All photos courtesy of MOGU) 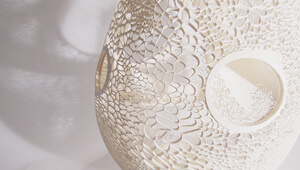 RICHARD BECKETT, challenging the aesthetics of human structures and objects