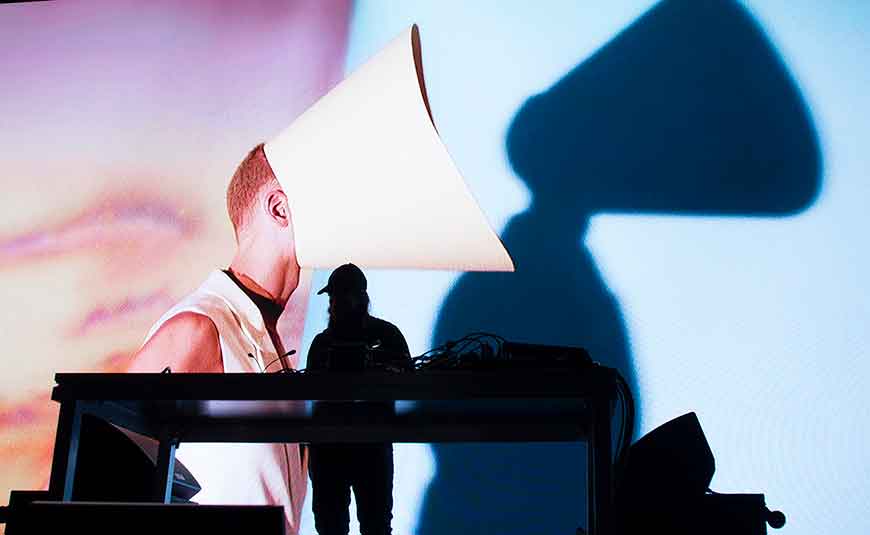 In 2007, a modest collective named “Colectivo Datatrón” decided what it seemed impossible, launch an avant-garde electronic music festival in Gijón. A city with a population of a quarter-million, located in the rainy, almost rural, north coast of Spain. Gijón has memories of a richer cultural past; back in the nineties a generation of pop musicians sprout establishing themselves at the front of the country’s music scene, the city was also a regular place for old school DJs with legendary venues like “El Jardín”, and “La Real” a techno cathedral half an hour drive, La Real was so revered that Surgeon dedicated a song to the club. Time passed, that generation faded out and the city’s cultural landscape came back to dull normality. By the time L.E.V. started, the idea of throwing an experimental music event focused resembled closer to borderline crazy than cunning. Two years later Aphex Twin played there. In a whim, the festival consolidated as a go-to place for experimental and A/V fans in the country.

This year, and for the first time in its history, L.E.V. has moved 400km South to Matadero, a public civic center and art space in Madrid, near the Manzanares river. Madrid isn’t considered an amicable city for electronic music, not because there isn’t an audience, the shortage is actually of adequate spaces, venues that can host large enough crowds with the right sound. As a regular attendant to electronic events in Madrid, I am skeptical by default on things like sound quality. This time my skepticism vanished soon, the sound was the best I have ever experienced in Madrid, with a state of the art Soundscape sound system in the main room (Nave 16), the artists got the sound they deserved, the rest of the stages were also well provided.

The lineup was balanced, bringing back two artists that played at the original 2007 edition, Plaid and Ryoichi Kurokawa, joined by younger talents, likely more appealing to the new generation such us Aïsha Devi, Kelly Moran or Recsund. The forward-looking spirit of L.E.V. was present in non-expected directions, a few urban acts like Baabi or Sega Bodega were selected, bypassing the denseness and seriousness abounding on these kinds of events and bringing much-needed fun and dance.

L.E.V. stands for “Laboratório de Electrónica Visual” (Visual Electronics Lab), and true to its name the visual aspect of the festival was a pilar in a few ways. Starting with VORTEX, a space dedicated to VR performances and cinema, continuing with the Plató (meaning “set”) stage, focused on innovative, visual focused live artists like Push 1 Stop & Wiklow or the collaboration between Oklou and Krampf. Finally, some dazzling visual work came from the performances of Spime.IM, Alessandro Cortini accompanied by Emilie Elizabeth and Raki Fernandez, Marta Verde performing along Tensal, or Nkisi, with a spectacular laser show, product of the collaboration with Charlie Hope.

The festival droned along four days, day and night, with a curfew time of 2 A.M of which many were thankful. Below you can read about some standout performances. Ryoichi Kurokawa presented Subassemblies, a performance that uses perspective to explore the relations between humans and nature, a stunning piece where the visual is as important as the aural, deploying sensations of physical harshness, and intense cinematic, paralysis.

Shoeg is the artistic name of Carlos Martorell, an artist that pulls inspiration out from video games and virtual worlds, he showed Infiltrate, an audiovisual performance of fragmented sounds, using a sort of modern theremin which controlled both music and visuals. His sonic palette, polyester ambient pads, subsonic sounds, halls of reverb combined with ravish synths without any beat. The amalgamated sound felt fresh and energising.

One of the biggest surprises of the festival came from SPINE.IM, a collective originating from Turin, Italy which examines the spaces between reality and virtuality, using immersive VR technology. Their resounding live set abounded on those concepts imagining the rave of the end of the world, exposing monstrous trancey synthesizers and feral arpeggios enveloped in a tribal and spiritual voice.

Initiation by Nkisi, the Congolese/Belgian artist’s performance was composed of relentless, fast, pounding caveman rhythms, a wall of kicks accompanied by just subtle layer of ambient pads, the intense experience took over the Nave 16, providing one of the most extreme moments of the festival.

The legendary Spanish sound artist Francisco López presented one of his acclaimed multichannel works, as is common in his performances, and as he stated in the presentation of the piece: the utmost visuals are in the interior of your head; López avoided any visual aspect, a sleeping mask was provided, the public sat together in chairs in the middle of the enormous Nave 16 concentrating on a feast of nature: cricket solos, birds and other animals intertwined with artificial sounds, a trip to the unknown without moving an inch.

To close the festival Alessandro Cortini was chosen, he delivered Volume Massimo, an evocative, melodic journey bestowed here in full force. His music was the perfect ending to an exciting and promising first edition. Not only L.E.V. can fill a much long-needed musical space in Madrid, but it can also do it with quality and ambition: a diverse, modern lineup, a state of the art sound and astonishing visuals.