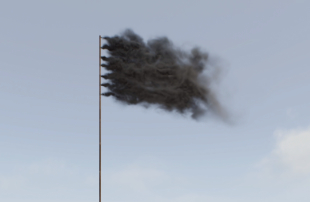 I’m sitting at the computer during the Spring Equinox on a glorious day when any number of people I know are gardening, walking through parks, or otherwise enjoying the light breeze and sunshine. I have one lamp lit, one, and occasionally two computers running, numerous tabs and browsers open at any point, music streaming to a Bluetooth enabled speaker, texts bouncing around across multiple apps, a dishwasher running, and the fridge humming concerningly loudly. Did any scientists exploring electricity two hundred years ago imagine the usage that would occur even on a bright, cloudless day? My energy consumption isn’t as bad as some, but my anxieties around climate change make a calculating awareness a lingering backdrop to any activity. This is the context in which many of us live.

Much has been made of the energy-intensive use of blockchain. Its environmental impact, as anything involving the internet, is worth acknowledging. Data centers are energy consumptive. Streaming video has a surprising carbon footprint, especially if viewed on a television. A laptop then pad, then ‘phone’ (are we still calling them phones?) less because energy consumption depends not only on the activity but also on the device. The art world has made too much of a stand in climate change to ignore blockchain technology issues. The outrage stems, however, from some confusing information circulating, which is why artists like John Gerrard trying to raise awareness are valuable, even when their effort has flaws.

Bitcoin and Ethereum remain the most popular blockchain currencies and the most energy demanding chains, but alternatives exist like Pixeos, Kodado, and others. Bitcoin tripled its energy use since 2014 but is still only 0.2% of global energy consumption. If Bitcoin were to continue its growth rate, its exponential energy consumption would quickly become a major problem. For that reason, while still at the outset of blockchain’s use applications, everyone in the art industry needs to make choices for the betterment of blockchain.

The environmental impact of energy use demanded by blockchain needs to be taken seriously. Those involved in the art worlds and markets should insist on using platforms that consider ecology but, even within the energy sector, other practices have far larger carbon footprints. The energy demands of transportation for presenting and attending at art fairs are an environmental issue that should not be ignored to malign blockchain. Beyond transportation, coal mining and fracking present global problems, industries where improvements would have far greater significance on planetary health. Nevertheless, now is the time to focus on alternatives to the energy costs of blockchain mining. Fortunately, some solutions already exist, and others are in development.

So-called “lazy mining” doesn’t mine a token until its first sale. This is significant because so much work on the blockchain doesn’t sell (as many artists know from other sales situations). “Side chains” allow users to put something on the blockchain and only later, if so desired, transfer it to Ethereum. A regularly updated Google sheet of the various chains’ eco-impact provides pertinent information. Several websites calculate the carbon footprint of various platforms. Even better, bounties exist to fund development of better options.

Many are hopeful that shifting from Proof of Work (PoW) to Proof of Stake (PoS) will decrease energy significantly. This shift can happen only if people are willing to make the effort of committing to it. When the NFT platform Foundation launched, it used PoS. Still, it was isolated because it was different and went back to PoW when feedback indicated that users didn’t want to navigate the changes that PoS necessitated. Platforms are challenged when collectors or industry leaders don’t facilitate efforts to improve.

On Saturday, March 20, 2021, John Gerrard minted Western Flag on Foundation to raise funds for regenerate.farm, a cryptofund for soil restoration and post petroleum agricultural practices in Ireland. The work is based on his well-known solar simulation from 2017, Western Flag (Spindletop, Texas), launched on Earth Day to raise global awareness of the impact western nations have on global climate. This work will sell on the Ethereum blockchain with an opening bid of 250.00 ETH (on that day equal to $448,962.50) that launches a 24-hour auction.

Gerrard founded regenerate.farm as a way to support biological and regenerative farmers and organisations. Regenerate.farm focuses on carbon sequestration as opposed to carbon offsetting, which has no real impact on reversing climate change. For example, the organisation will fund carbon reversal efforts that remove petrochemicals and nitrogen fertiliser from soil and “carbon drawdown” that captures carbon dioxide in the air and locks it in plants, soils, rocks, depleted oil wells, or long-lived products like cement, for decades or potentially centuries.

Gerrard is aware that there has been much anger at artists’ energy usage in engaging with blockchain, so he addressed that by having Carbon.FYI track the energy associated with the auction. This will present a real-time record of the project’s carbon footprint. Pace Gallery, representing the sale, also states: “Ethereum will be donated to regenerate.farm to offset this usage at a rate of 0.1 eth per tonne of carbon dioxide, or approximately 16 times standard industrial rates, making it ‘superneutral’. Gerrard compensates for the ethereum mining generated by the purchaser of the work during their transaction by donating the equivalent ethereum to the farming cryptofund from the artist’s proceeds.” I can’t help but hope that Pace is doing this compensation and not leaving it to Gerrard alone.

Some artists insist that no use is acceptable, but blockchain is unlikely to disappear—just as our use of the internet continues despite the many environmental and surveillance issues it poses. Gerrard should be commended for the creative approach he is taking to the energy requirements of blockchain. His is not the only solution, and any flaws should be seen as opportunities to do better, not reasons to abandon blockchain altogether. I wish, for example, that he had chosen not to mint the work until the first sale (lazy mining) or used his notoriety to raise awareness of platforms that are more ecologically conscious; hopefully, the next art celebrity will make choices like these.

Powerful figures within the art world—artists with clout, major galleries like Pace, auction houses like Christie’s that are using blockchain for record keeping—can use their influence to guide collectors, artists, and others to more sustainable blockchains and practices that are less energy consumptive. Only that kind of support will ensure that developers attempt increasingly sustainable options (besides reducing the general perception of art world hypocrisy). The loss of fairs and travel in the last year have made many aware that reducing our carbon-heavy practices is possible when required. Change is possible when desired. Blockchain is still disrupting the industry, and everyone from artists to auction houses can commit to developing, using and supporting platforms and chains that offer the least environmental impact.