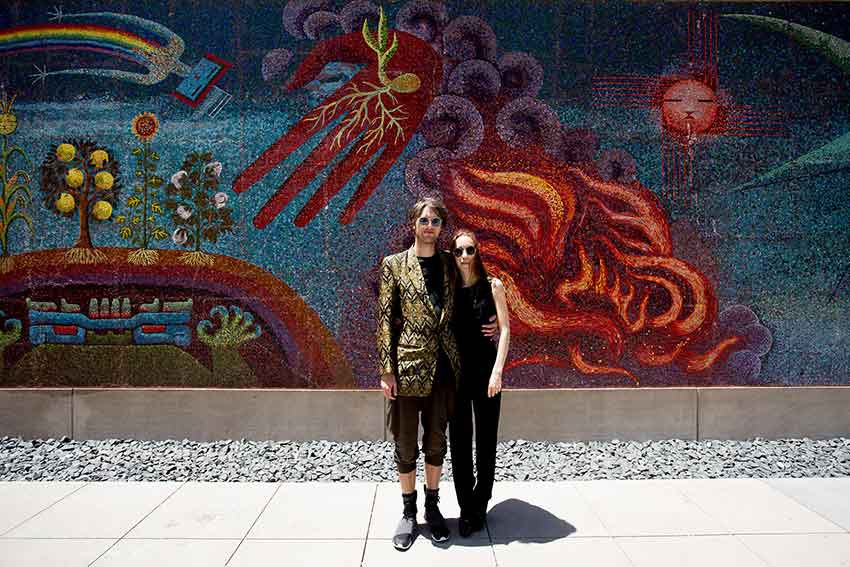 Every autumn in the charming city of Utrecht there is a meeting of minds and bodies who come together in the spirit of one central element: music. Not a statement of overt grandeur, of course, a music festival is a rather self-explanatory and long-established concept. Through a number of uniquely enthralling characteristics, however, Le Guess Who? draws people back to the Dutch city time and time again.

Sitting just half an hour by train from Amsterdam, Utrecht is artful, youthful and atmospheric and the festival does well to incorporate this into its social infrastructure. A city festival, the use of multiple venues naturally deposits visitors at points dotted all around Utrecht, underground industrial spaces, churches and cafes. The focal point of these is the impressive TivoliVredenburg centre, a dizzying complex of stages, bars and cafes set over five floors in a vivid, contemporary presentation. This dynamism in the use of venues keeps things unpredictable and the festival experience rooted in movement rather than sedation. The programme curation follows this theme, skipping around vastly disparate genres in a way that somehow makes sense, and revealing a deep knowledge and respect for hundreds of scenes, historic movements and iconic global locations.

One of the indispensable tools deployed in the programming of Le Guess Who? is the execution of guest-curated sub-programmes which make up a sizeable portion of the artist lineup. Past guest curators include Sunn O))), Julia Holter and Grouper. By inviting external influence in this way the organisers are leaving elements of the festival’s character to be dictated by external minds, some perhaps far removed from core intentions and routes of expression.

This is true in a musical sense, but for 2019 a noticeably more radical approach has been taken with the recruitment of guest curators Iris van Herpen and Salvador Breed. Iris is known for her work in fashion design, creating innovative bespoke pieces which possess qualities that stretch the art form far beyond expectation and convention. Various unique and masterfully executed approaches leave design traditions behind, instead of locating surreal, dream-like artefacts in a kind of hyper exotic future landscape. Salvador Breed is primarily a composer and sound designer working with the spatialisation and contextual reconfiguring of audio. He could be described as a sound choreographer as well as a composer, ordering sonic information through dimensions as one might sculpt the behaviour of objects in relation to the physical attributes of a space.

‘Where Iris’ work is completely based on materiality, mine only exists by moving air.‘ says Breed of the contrasting nature of their practices. ‘It exists in time rather than in material.‘ In collaboration, this rift is narrowed and deconstructed in various ways – a shared notion of composition underpinning the process of creating, an eye (or ear) for compositional elements and their transmuted counterparts and the importance of recognising nature’s influence, at all levels of magnitude. Both artists seek to expand the potentials of their materials, beyond breaking point, into a liminal space where disparate elements – in this case, fashion and sound – can intermingle and create new composite forms.

The pair’s approach to curating their portion of the Le Guess Who? programme could be said to extend their own attitudes to creating in an age dominated by technology and self-eclipsing scientific developments. However, more personal experiences have driven the selection – which includes Djrum, Amnesia Scanner and Efterklang – into an eclectic, highly expressive mix. What links them together is how they each describe one of a number of identities that can make up a human being or a single sense that when intermingled with others can define the complexity of the human experience.

This sense of scale and exploration of the macro and micro can be heard in Murcof’s compositions, which drift between contrasting notions of magnitude. A certain intricacy, for instance, drives the rhythmic components of ‘Mir’ (2002); a flurry of pops and clicks set against a creeping orchestral background, perhaps using timbre and detail to suggest the track exists on a human plane. In comparison ‘Oort’ (2007) is a shifting planetary journey that expands pensive orchestral sounds via blasts of enormous synth. It’s an altogether more atmospheric piece that describes galactic expanses and concludes the aptly titled ‘Cosmos’ album. Murcof performances are fairly rare so he is sure to be one of the most anticipated acts in the curation. These disquieting themes are further explored by FIS, whose sonic abstractions edge more into a sort of processed post-techno.

More overtly technology-driven content comes via Holly Herndon, a producer who has delved into increasingly complex and conceptual practices in her creation of music. She will be presenting material from her album ‘Proto’, released earlier this year. The work follows on from previous releases that focus on specific technologies, this time featuring a pronounced use of AI. On one hand, this machine intelligence (named Spawn and assigned female pronouns) could be seen as a compositional tool, using algorithmic processes to first decode and then augment the real vocal ensemble Herndon employed. On the other, given this augmentation lends a new voice and character to the group rather than simply processing existing material, it’s maybe more a case that this is a thinking and performing entity in itself. The question hangs in the resulting sound, an intriguing amalgamation of familiar tones and alien movement.

On the subject of art and science, Breed states that it ‘feels natural for them to be closer together‘, and that he is aware of an increased sense of cooperation between the two forms – art reflecting scientific developments; scientific research being inspired by art. In the curation of their sub-programme, it is evident that both he and Iris van Herpen welcome and seek to celebrate this union, central as it is to their creative processes and many facets of the contemporary lives of us all. Though there are reasons to be cautious of a tech-dystopia, this needn’t be a central aspect of our confusing modern times; around the corner from doubt lie the endless wonders of creative alchemy and sensory entropy.


Website https://leguesswho.nl/
(All images courtesy of Le Guess Who?)