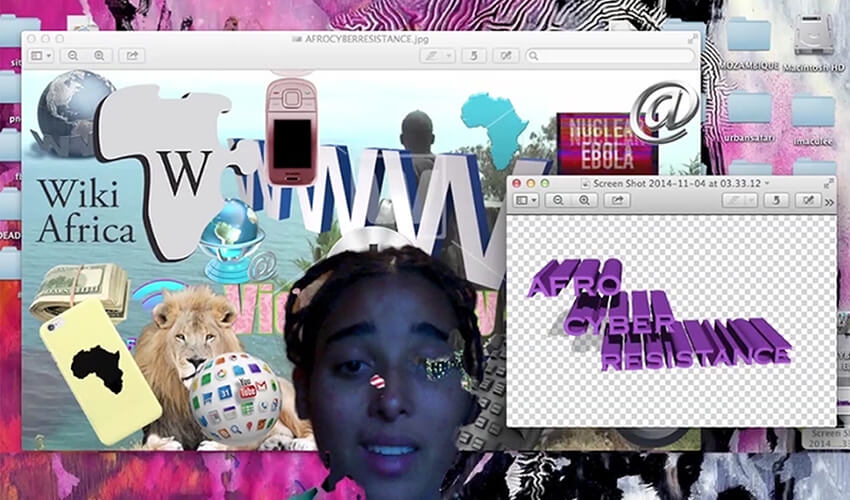 (Inter-) was the UK’s culmination of the Amplify project, which had its origin in 2018 in MUTEK Montréal, Canada’s festival devoted to electronic music and digital arts. Having then travelled to Buenos Aires and Mexico City in 2018-19, Amplify finally arrived at Somerset House in London, to crystallize into (Inter-), a two-day event with an audio-visual programme on the 7th and 8th of June 2019. In the ethos of Amplify, which was created with an aim to connect women-identifying artists and curators working with the digital arts and immersive storytelling media, through installations, presentations, panel discussions, DJs and live performances, (Inter-) created a participatory platform for discussion on the themes of access, inclusion and gender equality from both local and international perspectives.

11 international artists working with digital arts (sound, image, AR, VR, live sound and image) were invited for a one-week residency at Somerset House to connect, network and explore the technology-based art practices in the UK and outside, in order to learn how to navigate through the field. Building confidence and empowering female identity of artists in electronic music and digital arts, (Inter-) was a chance for the public to get familiar with these talents from the UK and Americas and to experience their experimental art practices.

During the whole duration of (Inter-), the audience were invited to walk through the grand interiors of Somerset House to then completely lose touch with the surrounding reality, while immersing into the digital artworks displayed, like in the example of Inside A, the VR installation by Analucía Roeder. With a headset on and a remote controller in hand, the viewer was teleported into imaginary environments, which they could manually guide through, in order to experience, how these different mental states occupy and coexist inside the artist’s head. While instead of mental migration, audio piece Migration Data by Ale Hope, took the listening subject on a sonic journey through narratives of migrants, who crossed the borders seeking asylum among European nations. For those looking for 2D experiences, videos by Sabrina Ratte, SIREN and Tabita Rezaire were screened in the adjacent room. Both of the programme’s evenings were activated by live performative acts, highlighting the presence of the female in connection to technology in the contemporary art world.

The first day of the programme focused on the ideas of selfhood, identity and perception. For example, Marija Bozinovska Jones, aka MBJ Wetware, having explored blockchain technologies in collaboration with King’s College’s Department of Digital Humanities during her Somerset Residency the previous year, for (Inter-) presented On Selfhood reflecting on artificial intelligence devices and the way they fragment the contemporary human body, for it to be always in becoming of data, to become quantified chemical components or evaluated emotions exploited by platform capitalism. While x/o through butterfly allegories explored their idea of identity and healing through music, Push 1 Stop & Wiklow through projection art tried to turn the ephemeral experience of the digital into a physical encounter with image and sound in the 3D space, housing Somerset House Studios.

On the second day, (Inter-) was mediated not only through art language of affect but literally through words in the mouths of the participating art practitioners. Moderated by Anne Duffau aka A—Z, the discussion between artists Eva Papamargariti, Sabrina Ratte and collective Hyphen Labs brought up questions of space in the digital, contrasted with the real and the material that technology and availability of its tools can make it more widely accessible. While the discussion brought to light many of the artists’ thoughts on the politics of virtual and physical architectures, the art and science synergy was probably best expressed during the presentation by artist Libby Heaney, whose background in quantum physics informs her artistic practice, that incorporates machine learning and artificial technology. Having opened up many questions of our physical relationship to the digital arts, the public conversation continued with the theme of the queer and how the digital can be a safe place to inhabit. Marie Thompson talked to artists Isaac Kariuki, Robin Buckley aka RKSS and Zaiba Jabbar. sharing with the audience their non-binary approaches to art and technology.

Having come to (Inter-) with a question of how to bring femininity into the world saturated by masculine identity, I have left with an idea that it might be the digital, virtual and the projected ephemeral, that through its malleability and versatility is a medium, almost a channel, that gives the female their long-awaited power. Thanks to projects like Amplify, the female presence on the art scene retains its agency, while the feminine perspective on the art and technology opens up completely new doors to unorthodox experimentation that phallocentric patriarchy would not reach otherwise.

Exhibition: Ndayé Kouagou’s ‘Will you feel comfortable in my corner?’ at ARIEL in Denmark