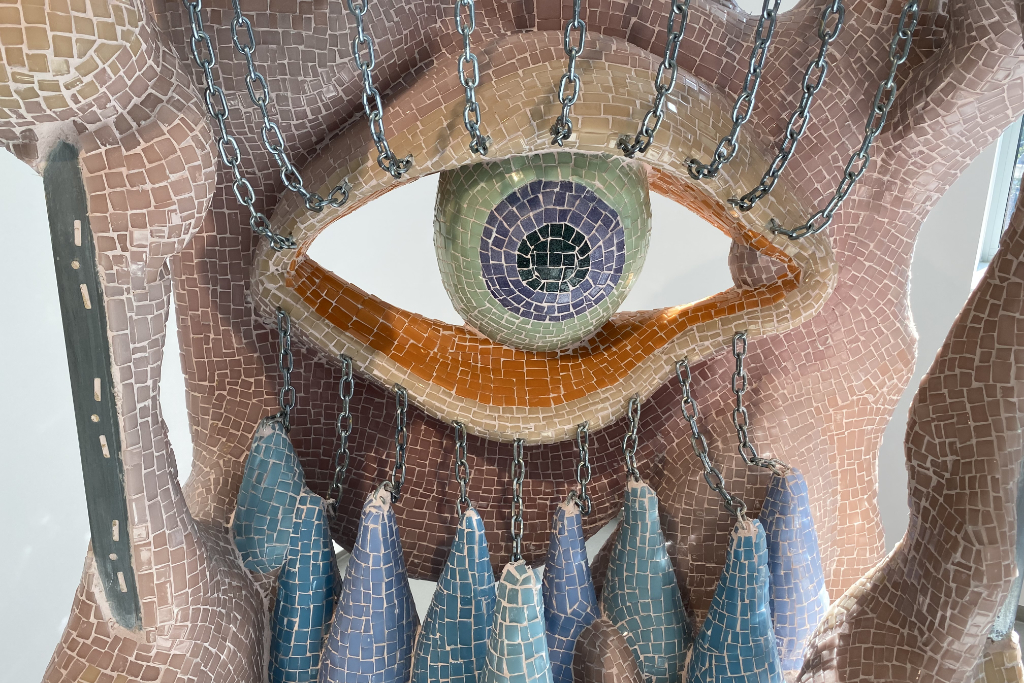 It’s a curious time now to open up and close down in many ways. Winter is coming, the clocks have been set back an hour, and the pandemic is once again on the rise. Luckily, some new things are happening here in Budapest, which quench a thirst for the cultural experience that has been missing for so long, in any way other than online. Brewing over this pandemic time, have been plans for the opening of a new art museum in Budapest, Q Contemporary, which had its inaugural show in September entitled, XY_now, Q_now.

This exhibition, which brings together the contemporary collection of Hong Kong entrepreneur Queenie Rosita Law in the glistening white space of a former gold museum, will continue until December 31st. Conveniently situated on Andrassy Street, the Park Avenue of Budapest, this location magnifies the approach to it as an experience of grandiosity and importance. There are several details which come to mind in considering the new space and its visionary founder: the enormous impact of women in the arts, and the invisibility or under appreciation of curators who create the global trends and context for artists to have a playground to showcase their insights in witnessing our present dilemmas and envisioning our future.

I have noted over the years that many artists don’t recognise what curators do or how important their curatorial vision is in driving the future of artistic activity as well as the importance and influence of collectors, who become the producers of the art world, supporting and funding activities and visions on so many levels, in a manner much like the producers in the movie industry. This museum combines the visionary influence of founder, entrepreneur, and director of Q Art Group, Queenie Rosita Law and curator and visionary Mónika Zsikla.

Zsikla is not only the Curatorial Director of Q Contemporary, but she is also the curator of the Hungarian Pavilion for the 59th Venice Biennale in 2022, with an exhibition by artist Zsófia Keresztes- After Dreams: I Dare to Defy The Damage.

With this in mind, the focus of the founder, on contemporary Central and Eastern European art, and her decision to create the museum in Budapest, will have a tremendous impact on the future of art in Central and Eastern Europe as well as internationally. The museum is also hosting this year’s exhibition of the Leopold Bloom Art Award finalists bringing into context not only the collection of the founder, but also creating a context for them with the works of those artists who are part of the elite Leopold Bloom finalists.

The flow of XY_now, Q_now is eloquent and subtle, with works positioned to capture reflections of colour and light in each other as one meanders around the exhibition as well as being representative icons in the contemporary advent of technology and conceptual thinking in Central and Eastern European art. The selection of artists not only includes works from Law’s collection, which was assembled in 2017, but also 5 new up and coming artists, bringing them into the public eye, in a more formal presentation of their work.

I met Zsikla at the press preview for the inaugural exhibition and have followed the progression of her programming for the autumn season. She has created a dynamic series of talks, with artists directly interacting with the public, leading visitors through the exhibition, as well as giving direct tours explaining her curation. It is exciting to have this new surge of public talks and opportunities for discourse and cultural intersection at a location in the heart of the city. I asked Zsikla through correspondence about her vision for the museum.

She responded, Q Contemporary has two important visions for future exhibitions, one of which is further collaborations with institutions and Hungarian and international private collections, continuing the effort we have just begun with the Leopold Bloom Art Awards exhibition. And our other important goal is to put in position the Q collection by drawing attention to the art of the region. Beside these two mainstreams, the curatorial approach is regional. This means that in the long term the visitors will see dialogues and parallels among artists from the same generations but from different countries.

These two visions, will work to expand the impact and put into context the work of not only Hungarian artists, but of artists in the greater Central and Eastern European region, allowing for an aerial view of the trends and influences here. With the advent of this exposure and the popularisation of the museum and its exhibitions, visitors will carry away with them the memory and indirect influence of cultural experimentation and innovation in contemporary art, which is unique to these artists from their specific perspectives producing art in Central and Eastern Europe.

Through the works of some of the exhibited artists, one may be confronted with elaborations and reflections on the collective history and referenced traditions of the region. In the case of other artists, we can encounter the retuning of architectural and art historical references, elements of the visual tone of the 21st century’s digital image culture, that is constantly incorporated and distilled into the reflections of contemporary painting, or even, the (post) effects of techno culture in the last decades of the 20th century. The exhibited works not only uniquely combine sensuality and virtuality, analogue and digital, real and surreal, but the complex and plastic system of reference points and iconographical elements that appear on the works and merge into each other, are also combined with the formal language and references of generations throughout the turn of the millennium, explains Zsikla.

The work of Zsófia Keresztes, the artist selected to represent Hungary in this year’s Venice Biennale, is a prime example of hybrid historical influence synthesised and reborn into contemporary vision. Kertesztes’s work appears with a beautiful preparatory sketch as well as two mosaic sculptures, Lost and Found, 2020, 95 x 60 x 183 cm and Sphinx, 2020, 60 x 120 x 184 cm. Their size appears on a human scale, a corporal quality to their forms, however surreal and fluid they might be. The works are produced with styrofoam, glass mosaic, fiberglass, glue, grout, metal shelf, chain, and expanding foam in a solid technical production.

Having lived in both France and Spain, my mind immediately draws association to the relatives of these works in the productions of Niki de Saint Phalle and Antoni Gaudí; Keretesztes’s works are as if their cousins or children, with a family resemblance, but representing distinct traits, values, and artistic decisions. The large eye in the upper third of Lost and Found, immediately brings to mind the occult and the mysteries of the unconscious. These works are fanciful and gentle on the eye, with curving undulating surfaces, adorned with mosaics in delicate pastel colors, almost as if a watercolour emerged from the page into a three-dimensional plane. What was once flat becomes sculptural, fluid and frozen in place, reminiscent of the movement of mercury.

Turning to the left, one is drawn into a room filled with similar colours, some more chromatically intense, others almost identical, but in a format completely opposite in two-dimensional evenly painted rectangles leaning against a wall. Programimage, 2018 by Ádám Varga, is a dancing array of small and large rectangles of colour, each painted flat with a lighter or darker frame of acrylic paint, simulating the flickering effect of electric light in the manner that our eye’s dance around the alluring colours bouncing from one frame to the other. One might liken this stimulus to the visual presentation of the search patterns of Random Access Memory or RAM as we say in computer speak or perhaps to the earlier Dreamachine of Brion Gysin and William S. Burroughs. The Rapid Eye Movement (REM) of our dreams, becomes the Random Access Memory (RAM) of computers as a mesmerising effect produced through colour and form.

There are works displayed from Hungary, Czech, Serbia, Romania, and Ukraine, to name a few of the locations, but also these artists have resided in various global locations, and this richness flickers in and out with the commonalities of the region and generations across this region. We begin to understand the pedagogical nature of this experience, the works bringing together efforts in cultural knowledge-building by artists of three generations, X, Y, and now.

Zsikla explains further the concept of the exhibition, Most of the exhibited works represent the collection of Q Contemporary, complimented by works of five young artists with whom the institution seeks closer collaboration in the future. Among the generations, Generation X and Y represent a new type of age group whose experience of the world is already extremely determined by the rapid development of technology. According to the definition of social sciences, members of Generation X were typically born between 1960 and 1979, and the generation Y is the group of people born between 1981 and 2000 who had already grown up at a time when digital technology was taken for granted. American writer and thinker, Marc Prensky aptly used the term ‘digital immigrants’ describing the members of Generation X as a group who adapts to its environment, discovers and uses the advances of technology, yet still lives halfway in the past.

Indeed, as a Generation X artist myself, I concur that one has one foot in each world, a constant straddling akin to balancing on a surf board. This exhibition marks a delightful and intriguing adventure into the cross generational influences and their intersection across borders of Central and Eastern Europe. How wonderful it is to have this new museum pop up and bring into focus these aspects and foundations, with artists’ works from a variety of generations and countries in this region. Surely, it adds in the attraction to the amazing setting and cultural history of Budapest as a travel destination for art lovers and collectors. 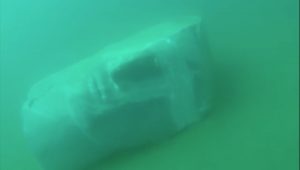