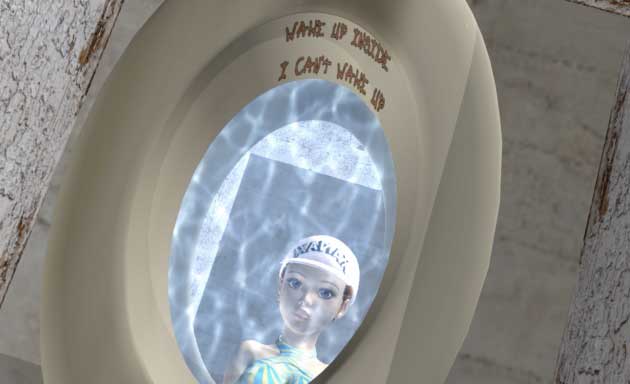 A mytho-digital journey has been conceived by Jon Rafman in which the most severe anxieties of the 21st century techno-society melt into an obnoxious 3D-animated atrocity exhibition. Here, CGI (computer-generated imagery) particularly performs as a form of indulgence in excessive transfigurations of mutant bodies. The post-industrial landscape of a deserted planet is presented to us inhabited by the progeny of disrupted monstrous wildlife and its synthetic architectural complexes. They serve as venues for obscure future-primitive cults or electro-toxic dance clubs entertaining the death fights of bizarre biotech creatures. This is the nightmarish Dream Journal of Rafman that breeds Xanax girl through mutant data-farming techniques employed by the labyrinthine school for her clones. “We are just the copies of copies,” they say again in a creepy deja vu.

The 2019 Venice Biennale presents Rafman’s 3 years of exploration into the 3D simulated environments (2016-2019) that form the feature film Dream Journal (94 minutes). Here Rafman radically experiments with imaginary worlds populated by the obscene diversity of biotech mutants. CGI reveals the dark vitality of techno-materialism that moulds post-human forms with chimeric beasts, monstrous insects and Japanese sexual perversions. BDSM Tokyo schoolgirls eaten out by giant snails cry sperm-milk from Janus faces growing inside their anuses. Their topsy-turvy bodies twist and collapse in an anti-dance of digital butoh and virtual shibari of phantom vectors. They date retarded half-hedgehog half-walrus boys who fight against each other in cage death-wrestling tournaments staged inside dubious techno clubs of tropical spacecraft decor. Xanax girl is sentimentally attracted to one (or two) of them. As she descends on a journey filled with platform computer games like booby traps and post-apocalyptic military bars, she allows for frequent penetrations of medical apparatuses, only to give away her body to techno-shamanist occult rites that disintegrate and transfigure her corporeality further still.

All the spaces and realms of Dream Journal seem to be connected with processes of mutant transfigurations that challenge the human form over & over. The database institution that extracts Xanax girl from amongst the forms of her clones also links distant events through networks of canalizations. Digital excrements become the most fertile media for mutant communications. The shit-hole orifices make sex with various enslaved bodies and feed on their inner organs. In effect, the produce of digi-excremental canal digestion is eventually served as pet food to giant caterpillars that swell and multiply into new energy sources.

Yet, in the midst of Rafman’s accelerating bizzare neo-savagery, he invites moments of gentle sadness. The absurdity of obscene mutations sporadically suspends the characters of Dream Journals in moments of nostalgic stupor. Out of a sudden, the computer game-like actions are interrupted when characters have to disintegrate or remain confined to particular local territories. They surprise us with expressions of disappointment and longing towards what could be described by the Japanese term mono no aware – the subtle contemplation of the transience of things. Those expressions are actually far from dominating the general mood of the narrative but nevertheless, they allow the real anxiety of lived experience to creep into worlds of macabre, detached and fantastical exaggerations. This unexpected and maybe even unwantedly grotesque closeness to unrealistic dreamy whims of biotech visions, imposed on us through sorrow, give the audience a vivid sense of their mediated bodies as processes in the making of unhuman materialities.

Why do all these mutant bodies populate Rafman’s computer screen out of a sudden? Seemingly, there is a certain realization behind Dream Journal that diagnoses digital media as increasingly and obscenely mutagenic. Strange it may appear since the year 2019 has witnessed a wave of censorship of major Internet platforms. Tumblr introduced their ‘safe & trust’ policies of removing pornographic and gore content, Vimeo started deleting many long-living profiles after accusing them of ‘activity primarily focused on sexual stimulation’ and Facebook increased cases of blocking computer-selected profiles in the name of digital ‘family values’. All those vague ethical algorithmic systems, many times short-circuit confused, nevertheless insistently express circular obsessions with human sexuality.

They aim at the suppression of raw drive and desire that may appear aggressive. Standing for controlled concepts of communities, mainstream media policies effectively erase the imagery related to human body reproduction – the infamous nipples, shameful genitals or even more abstract body presentations that happen to involve moist or tense expressions, perhaps suggesting the possibility of secreting glands within hidden orifices. Those policies of familiar communities become somehow uncanny as the meditated families insistently disconnect themselves from technicalities of sexual reproduction. As a reaction, the generative systems of contemporary Internet populations project digital mutant replicants without nipples nor genitals, welcoming monstrous deformities as long as they escape human biology features.

Rafman exposes the fetishistic spillage of repressed desire online, tapping into almost half-century-old Japanese hentai strategies of eluding censorship, which can be considered symptomatic for Internet aesthetics now. Since the 1970s Ero Guro movement in Tokyo, hentai answered to state prohibitions of portraying human genital intercourses by creating fertile subspecies of tentacle monsters that twist around no-longer human bodies and penetrate their dislocated orifices gaping in-between feverishly multiplying mamillae. Rafman created several side characters directly referencing abused by demons girls of Toshio Saeki and perfidiously manoeuvred the protagonist Xanax girl into bizarre interactions with rapey creatures of hybrid features, merging insectoid bodies with warty overgrowth or mollusc like pseudopods inspired by Horihone Saizuo. Eroticism becomes transfigured here into the primal relation of external digestion. Inside out guts performing pornographic figurations transgress the sphere of human sexuality and pull us into the desperate technological cannibalism of incestuous mutants. Asked in an online interview about his trans-species art of invasive eroticism involving sluggish soft bodies invasions into dehumanized squid women, Daikichi Amano described his desire as “a cockroach that had head and the body separated with the surprise and scary when having begun to run with the head and the body in separate directions.” The broken grammar of this Engrish quotation exposes hybrid nature of fragmented digital bodies in their hypermediated overexpressions. In the same vein, viral social media body performers like Aun Helden use their image manipulation art to castrate sex or ‘anything that presents them as men’, at the same time multiplying what’s considered to be anatomical anomalies. Instead, harmonizing with human forms their corporeal members bulge with black eggs that initiate no-longer-human replication. The shiny surface of the eggs reflects the mutagenic void of computer screens.

Ongoing project Dream Journal presents a feature-film length epic that reworks the traumas of the human body entering the Internet era media mutations. 3D-rendered are the monstrosities bred from the very desires projected by a culture of digital technologies. The plots fork into paranoid networks by pulling the viewer through severely methodic Role Playing Games of creaturely alienations. Jon Rafman made an extraordinary effort to collect spilt phantom limbs and chimerical flesh from all over the deep dark underbelly of the Internet. They are melted into a mythological journey of a near present that our addiction to technological stimuli eagerly evokes.