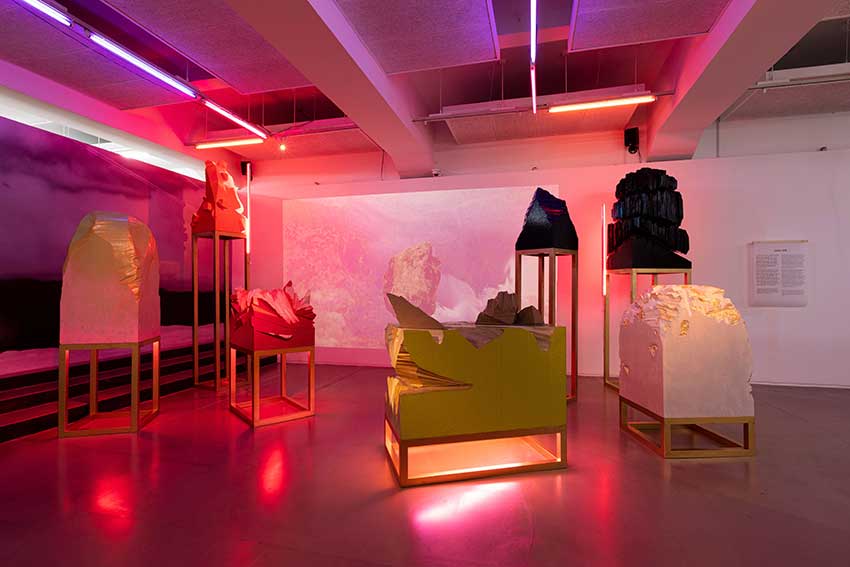 For the past few years, the term ‘Anthropocene’ has taken on an identity of its own. Coined by Paul Crutzen in 2000, with political intentions to mark a new geological era, the term Anthropocene was made to raise the issue with the various environmental dangers that society has invoked onto the Earth. From the loss of biodiversity, climate change, to extreme levels of plastics in the ocean, it had been getting clearer that human impact on Earth had been getting very serious.

The underlying message behind the term was to clear the air that the ecological crisis the Earth is undergoing is not entirely separate issues, but connected as a whole. Since the coining of the term, the Anthropocene has been a platform of sorts for artists, philosophers, and designers to engage and align issues with the repercussions of human impact and namely neoliberal capitalism and the acceleration of industry and technology that came with human ‘progress’.

While this agenda has been particularly popular in western Europe, it’s a presence in other countries has been spotty at best. That is why it was a surprise to see that most recently in Seoul,  the Ilmin Museum of Art hosted, Dear Amazon: the Anthropocene 2019. In it, artists in Brazil were given the chance to confront the audience with the Anthropocene as a term that goes beyond environmental concerns but one that relates back to political ideology, history, and emerging attitudes to human capital. For head curator of the Ilmin, Juyhyun Cho, ‘the Anthropocene serves as the large body of knowledge that offers a chance to participate in a grand narrative’ and her intention was to present a group of artists who would expand on the narrative of the Anthropocene in a non-western point of view. Projects exhibited such as, Unpolished Stone or Mineral Stories expand on this grand narrative by showing a highly politicised view of rare earth minerals which is motivated by the exploitation and industrialization of the rare earth minerals mining. For Brazil, rare earth mining remains a hotly contested topic.

As most rare earth minerals have historically been taken by western corporations, Brazilians view the act of mining rare earth minerals as one that has geopolitical consequences on top of the environmental ones. Although scholars like Clive Hamilton may disagree with the idea that geopolitics and economics should not be left in the conversation of Anthropocene[1], this sort of localized context may be the best way to understand exactly why the Anthropocene Era has begun in the first place.

By understanding the discourse of these Brazilian artists within the context of the Anthropocene, these projects attempt to support the point that Juyhyun Cho makes- that while discourse of the Anthropocene has mainly been discussed within western Europe- that its lexicon once moved can bring added narrative and different contexts. These clear political nuances are telling of Anthropocene as a term that does not just come from scientific facts but from an ideological origin. Admittedly this makes talks about the Anthropocene to be much more ambiguous in nature.

Neither fully about an environmental crisis or political ideologies, the Anthropocene’s ambiguous definition makes for many critiques.
One critique from Ilmin Curator Juhyun Cho has been about the proliferation of projects related to the Anthropocene, especially in more recent years. ‘Many of these projects need funding in order to advance, and many times it is the big corporations and the biggest violators of these environmental and political crises that end of funding the projects.’

The irony is not lost on Juhyun Cho that for all the hope and opportunity there may be in this word, that for the practice of art & design there is still a heavy reliance on the systems of western neoliberalism and capitalist practice as a starting point for dialogue. An even greater irony rests above, however, that our knowledge of these Anthropocentric forces grow and can be attributed to the advances in technology and industrialization which are the precise reasons for the existence of such forces[2]. It is through globalism that capitalism has depleted our resources at incredible rates, but it is this sort of globalized world that also maintains the networks of knowledge that allow us to understand concepts such as climate change which are crucial to the dialogue of the Anthropocene.

So then why is the term Anthropocene so important? Is it just another fad in the art world? Or an opportunity for political capital by those interested? Or is it here to stay, and will the terminology help bring together a different world? The answer remains murky at best but there are some things that can be rationalised about the Anthropocene. The first is that while it is a word that is political in nature, it is one that encompasses politics as one part of one ecosystem. The terminology is still rooted in geological forces that individual humans do not have control over.

The creation of the Anthropocene is its own symbol that grand narratives will no longer be a human-centred one, rather humans are only one of the many facets of elements that will create this grand narrative. Perhaps, the Anthropocene as a popular terminology in the art & design world will fade into the background eventually, but that won’t necessarily be a bad thing. If one thing the fact that the Anthropocene was able to be identified in the first place, presents an optimistic outlook on a world that may be less interested in self-interest and more interested in the world as a whole.
This will require new networks of knowledge, and ways of doing things that we are not yet familiar with. While neoliberal capitalism, industrialization, and technologization of society offered a dream of a human-centred utopia, the Anthropocene presents the opposite- a narrative that is not specifically human-centred. In this way, yes, there is hope that the birth of this term and the projects following it may bring about the needed knowledge, attitude, and willpower to resuscitate the Earth, but these projects are telling of just how monumental the change will have to be.

We will have to dig deep and understand that issues of plastics, waste, climate crisis and biodiversity are not just environmental issues but issues related to the mechanisms of power and control.
We will need to tap into our knowledge networks and repurpose them to fit our new goals. Things will have to slow down and time must be made to restructure ourselves to fit a geological narrative that can be positive. Whether this is possible or not is still unknown for now, but if we do not try, it will be not just the end of human-centric narratives, but the death of any human narrative.

(Photos courtesy of the Ilmin Museum of Art)
Citations: Hamilton, Clive. The Anthropocene and the Global Environmental Crisis: Rethinking Modernity in a New Epoch. Routledge, 2015. Berger, Edmund. “The Anthropocene and the End of Post Capitalism .” Deterritorial Investigations , 1 Apr. 2015, deterritorialinvestigations.wordpress.com/2015/04/01/the-anthropocene-and-the-end-of-postmodernism/.